Overview
As what is shown in the collaboration page, we have collaborated with team Grain Fed (Official Team Name: Shanghai_City_United), whose project focuses on developing a probiotic containing xylanase to produce feed additives and poultry beverages, which will be used to help poultry digest xylan and keep them healthy.
Similarly, we designed engineered probiotics that is functional in secreting cellulase, which will be utilized to produce feed additives for silage. We want to use the feed additives to enhance ruminants’ digestion for their breeders and the entire ruminant industry.
Since we have so many similarities, is it possible for us to design a combined research direction? Is it possible to produce a novel “mixed feed” functional to enhance both poultry and ruminants’ digestion? If so, this idea will be really great and may provide our two teams with an additional option for future research.
Research Background
We discussed the idea of “Mixed Feed” together and found that both of our teams showed great interest in this topic. Thus, we started to research about the feasibility of this fancy idea.
After an in-depth research, we obtained the following theoretical foundations for our idea.
Xylanase and β-xylosidase are the backbone degrading enzymes of heterogeneous xylan, which can degrade the xylan backbone to produce xylo-oligosaccharides or xyloses with different degrees of polymerization, which play an important role in the degradation of hemicellulose. β-xylosidase is mainly distributed in the GH3 and GH43 families. It degrades the oligomeric degree of xylan or xylobiose produced by the hydrolysis of xylanase, releases xylose from the non-reducing end, and weakens the substrate inhibition of oligosaccharides. Strains that secrete xylanase can generally produce β-xylosidase, which works together with xylanase. More and more studies have shown that β-xylosidase plays an important role in the degradation of lignocellulose. In the process of lignocellulose hydrolysis, β-xylosidase further hydrolyzes xylo-oligosaccharides and xylobiose, which are hydrolysates of xylanase, into xylose. β-xylosidase not only plays a key role in the complete degradation of xylan, but also alleviate the inhibitory effect of xylo-oligosaccharides on xylanase and cellulase. Therefore, β-xylosidase has been considered as one of the core enzymes in cellulase preparations.
Thus, based on the research above, our two teams decided to work for increasing the degradation rate of feed and solve the bottleneck problem of low cellulase hydrolysis efficiency and high cost. We have come up with a multi-enzyme synergistic degradation strategy. Xylanase has the properties of hydrolyzing hemicellulose and can cooperate with cellulase to promote the biotransformation of lignocellulose. We will further add the Bacillus subtilis xylanase xynA gene to the cloning recombinant vector to make it compatible with cellulase PKC -01 and express β-xylosidase at the same time (as shown in the figure below) . We wish that in this way, we will be able to improve the utilization rate of silage and grain mixed feed, and the applicable varieties of poultry and ruminants. 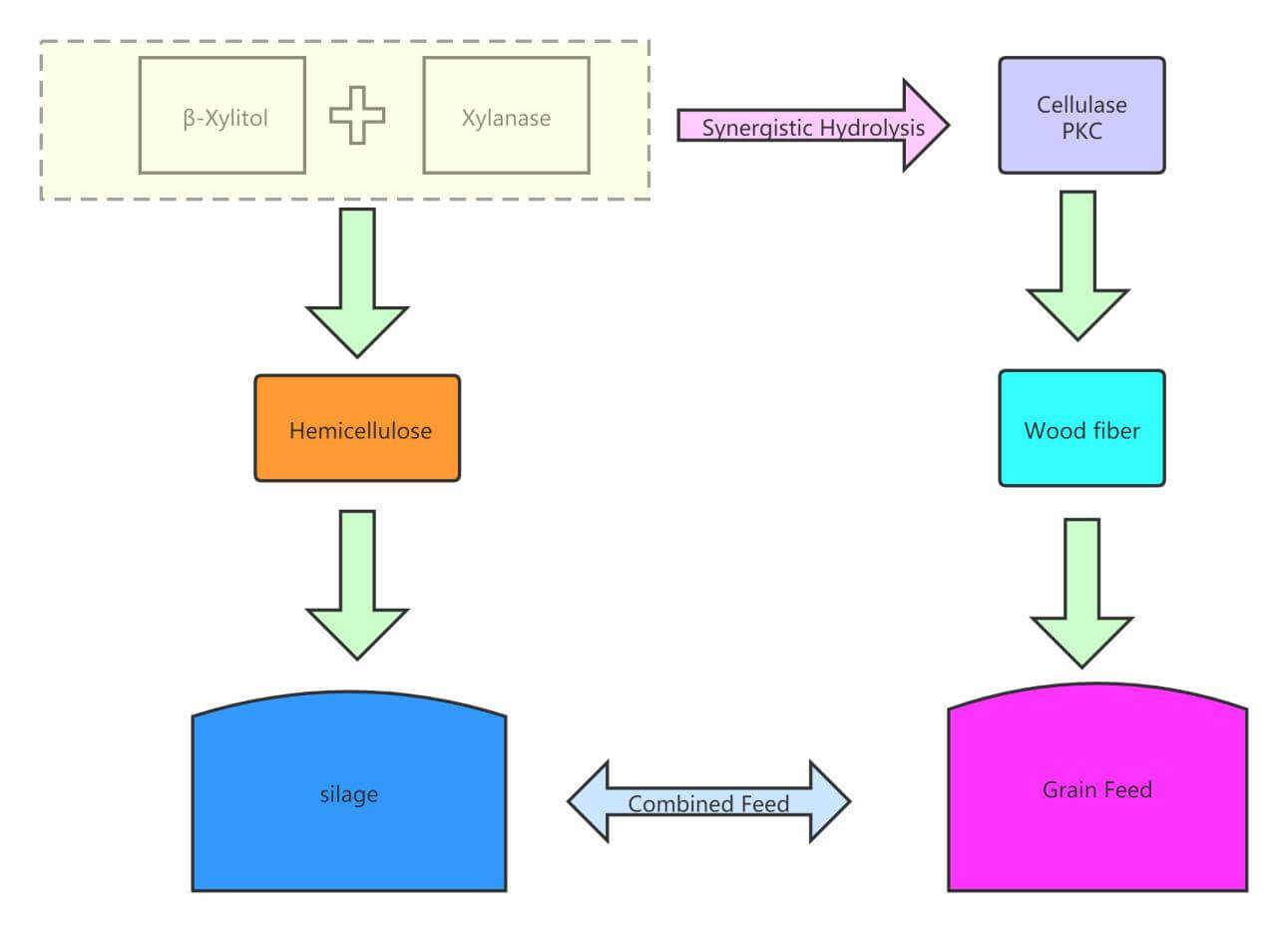 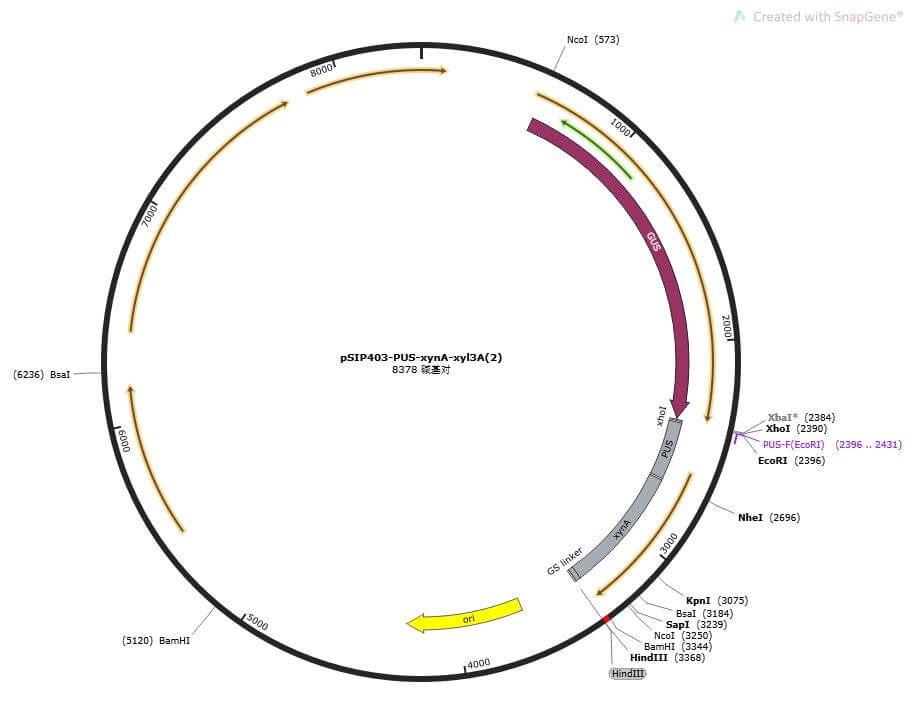 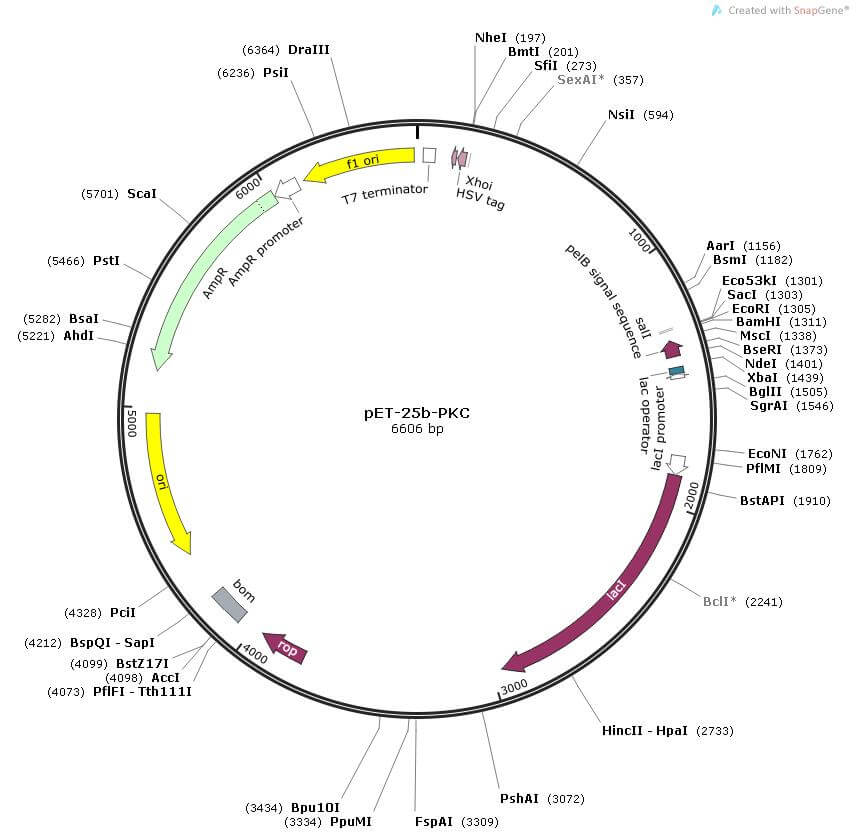 Figure 3 pET-25b-PKC
2. We will provide vector pET-25b-PKC
Further Experiments:
1. By chemically transferring the designed plasmids of pSIP403-PUS-xynA-xyl3A and pET-25-PKC into E.coli (DH5α) for patent protection;
2. Heterologous expression in Pichia pastoris.
1) Pichia pastoris is used for co-expression of xylanase xynA/β-xylitol, and cellulase PKC is expressed separately;
2) Positive transformants are screened to obtain a recombinant bacterial group with high enzyme production;
3) Enzyme activity and extracellular protein secretion are measured.
4) The three enzymes will be mixed and added in different proportions to explore the promotion of β-xylitol on the degradation of hemicellulose under different conditions such as pH, temperature and reaction time. Simultaneously, the high concentration of fermentable sugars (glucose and xylose) are tested under different conditions, which are produced by the synergistic effect of xylanase and cellulase in hydrolyzing cellulose and hemicellulose contained in lignocellulose.
JOINT CLAIM of Team Shanghai_Metro_HS and Shanghai_City_United
Shanghai_Metro_HS and Shanghai_City_United discussed the combined research direction, made literature research, and documented the project design together.
REFERENCE:
[1]Xia Wei,Shi Pengjun,Xu Xinxin,Qian Lichun,Cui Ying,Xia Mengjuan,Yao Bin. High level expression of a novel family 3 neutral β-xylosidase from Humicola insolens Y1 with high tolerance to D-xylose.[J]. PloS one,2015,10(2):
[2]J. Pérez,J. Muñoz-Dorado,T. de la Rubia,J. Martínez. Biodegradation and biological treatments of cellulose, hemicellulose and lignin: an overview[J]. International Microbiology,2002,5(2):
[3]李阳阳,刘松,尹小强,堵国成.黑曲霉木聚糖酶在大肠杆菌中的胞外表达和酶学性质研究[J/OL].食品与发酵工业:1-9[2021-10-13].https://doi.org/10.13995/j.cnki.11-1802/ts.028442.
[4]叶延欣,宁艳春,李雪芝,岳军,刘国栋,赵建.β-木糖苷酶及其在纤维素乙醇生产中的应用研究进展[J].生命科学,2021,33(06):773-780.
[5]武国庆,周娜娜.半纤维素酶研究进展及在纤维素乙醇领域的应用[J].精细与专用化学品,2021,29(06):9-16.
[6]黎忠. 来自Streptomyces ipomoeae的木聚糖酶协同纤维素酶酶解蔗渣的研究[D].广西大学,2020.