The pine wilt disease is caused by a specific nematodes--Bursaphelenchus xylophilus. This kind of nematode appears in North America, Europe, and East Asia, where pine trees in many places are now facing this hazard. B. xylophilus are harmful to many tree species and spread quickly. According to statistics, the pine wilt nematodes caused more than 5,000 hectares of pine forests to die in Taiwan, and caused over 20 million USD economic loss. Unfortunately, no effective method has been found to prevent pine wilt diseases so far.

During the brainstorming sessions, we were particularly interested in the problems of the environment. The environment is closely related to us. If something wrong happens to the environment, all species will be affected severely, including human beings. After researching, we realized a disease that harmed pine trees a lot -- pine wilt disease. Pine forest is a critical environment for diverse creatures. Trunk, rosin, and pine nuts can serve as industrial materials and ingredients. In Taiwan, forests cover over 61% of the land area, and this disease causes the large-scale forest to be destroyed. Ｗith climate change and globalization, this disease has spread to six continents. 2017 iGEM_Kyoto use RNAi as a powerful weapon to fight against B. xylophilus, using yeast to deliver dsRNA to nematodes. Although they filmed a video showing that nematodes sucked up yeast, the problem to solve was the low absorption rate of the dsRNA. We decided to change the method of feeding RNAi and try to use plant callus to deliver dsRNA.

Generate a B. xylophilus-resistant pine tree

RNAi is our weapon against B. xylophilus. We aim to generate a new kind of pine tree that can synthesize dsRNA encoding important gene information to B. xylophilus, such as target genes related to its reproduction and pathogenicity. When nematodes uptake plant cells, they also uptake dsRNA produced by plant cells. Once the nematodes uptake dsRNA fragments, the specific genes of B. xylophilus will be knocked down. First, we will clone gene sequences into E.coli to amplify the plasmids. After that, we will transform our engineered vector into A. tumefaciens. At the same time, we will culture the plant callus of Pinus armandii for the Agrobacterium-mediated transformation. After A. tumefaciens successfully infecting plant cells, we will inoculate B. xylophilus on the callus to verify if the nematodes would uptake dsRNA and check the survival rate of nematodes. Also, we will build models of the birth-death model of nematodes on the pine tree for analysis. To enhance public awareness of pine wilt disease, we will upload our broadcast on Podcast, write online articles, visit institutions and even design a board game to introduce synthetic biology! We hope our work could affect the world, and also the world could affect our work! 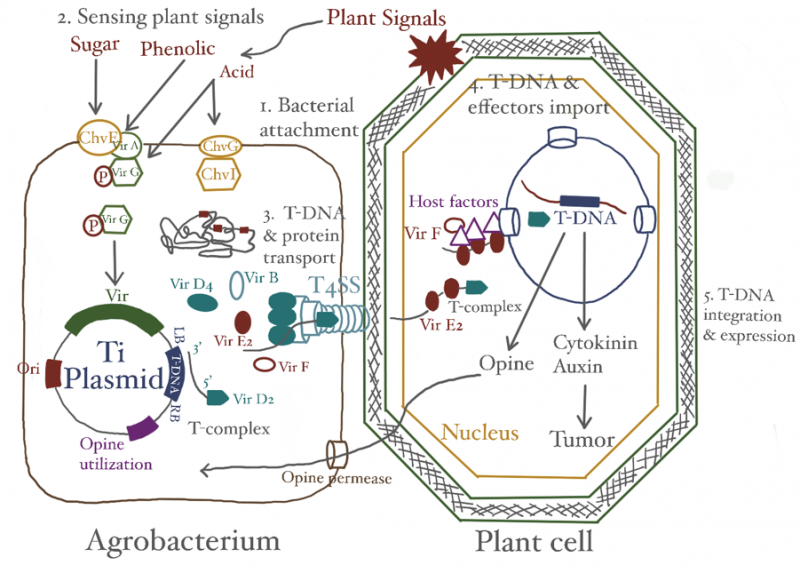 To understand the relationship between B. xylophilus, vector beetles, and pine trees, we must take a closer look at the underlying mechanism.

The life cycle of B. xylophilus can be divided into four juvenile stages (J1, J2, J3, J4) and an adult stage. In the adult stage, B. xylophilus will become male or female individuals that reproduce sexually. They mainly feed on the epithelial cells that line the resin canals, the fungi that invade the wilting pine tree and flourish around the insect pupal chambers.

Once the beetle carrying B. xylophilus attacks a healthy pine tree, nematodes will exit the vector's body and invade the pine tree. The pine tree will start to show wilting symptoms in three to four weeks after infection. In the beginning, to prevent dying, the tree will give the following responses, like generation of superoxide, increase in lipid peroxidation, accumulation of polyphenol, and emission of volatiles. These responses will affect nematodes, but nematodes will move to the other parts of the tree. Then, the tree will rise a response to the place where the nematode moves in. With this cycle, the immune responses against nematodes spread into the whole tree. As a result, the cell in the pinewood will be damaged, and cell content in the pine tree will appear leakage. Finally, the pine tree died from water deficiency. The dead tree will attract more beetles to lay eggs in this tree. 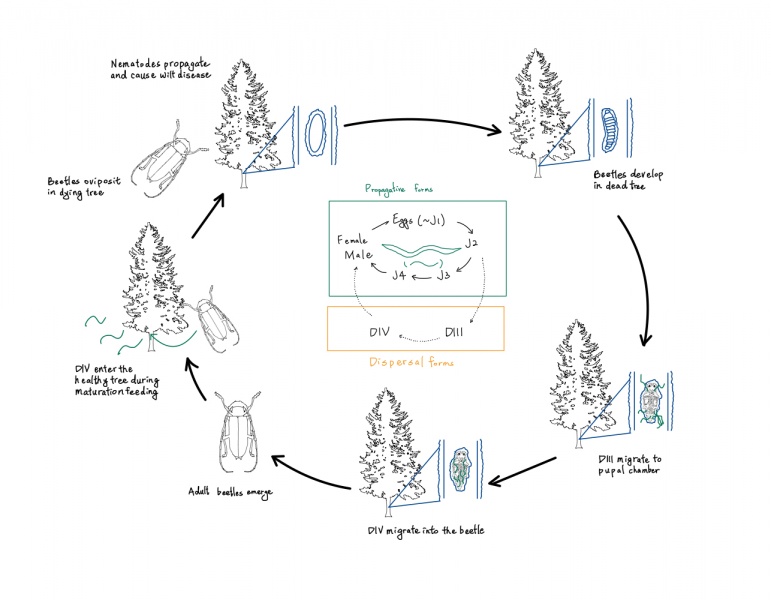