How can we implement our ideas towards our research focus?

In order to determine our bacterial vector, many different strains of probiotic bacteria were evaluated and their various characteristics were organized into a probiotic comparison chart.

Ultimately, Lactobacillus rhamnosus GG (LGG) was chosen as our final bacterial chassis due a wide variety of reasons. Lactobacillus bacteria is a normal part of the human gastro-intestial microbiota, and is best documented due to its role in the industrial fermentation of dairy and other food products. Thus they are considered a highly safe food-grade organism, as adverse effects have been rarely reported in their long history of safe useage (Pradhan et al, 2020). In particular, LGG is one of the most widely used probiotic strains, and its effectiveness in the treatment and prevention of various gastro-intestinal disorders have been well documented. This strain is one of the few Lactobacillus bacterial strains extensively studied for its probiotic properties, both in vitro and in human clinical trials (Kant et al, 2011). As such, it demonstrates great potential in being used as a therapeutic engineered bacteria, benefiting from the wealth of knowledge of Lactobacillus biology and ease of manipulation (Kan et al., 2020). This high degree of engineerability its credited to its relatively small genome size, which means that it expresses few native proteins and can reliably achieve high levels of target protein expression (Kan et al., 2020).

It is important to note that when examining vector options, E.coli Nissle 1917, Bifidobacterium and Streptococcus, were also studied in addition to Lactobacillus. While Streptococcus thermophilus was initially considered for its excellent acid/bile resistance, high adhesion capacity and strong anti-inflammatory potential, it was later eliminated due to a poor intestinal retention rate, a characteristic that would not be ideal for a probiotic vector (Junjua et al., 2016). Similarly, Bifidobacterium was also eliminated as it was discovered that most Bifidobacterium strains display a less robust acid tolerance compared to the three other bacterial species, with some strains even demonstrating pathogenic potential (González-Rodríguez et al., 2013).

Many past iGEM teams who focused on IBD or gut inflammation chose EcN for its well-characterized therapeutic benefits, and we also took this strain into consideration in our chassis selection process. This strain, as its name suggests, was isolated in 1917 by Alfred Nissle from a German soldier’s faeces during World War I (Sonnenborn, 2016). The soldier was observed to have better gut health compared to other comrades and did not develop intestinal diseases, which led Nissle to believe that EcN had antagonistic effects to pathogenic enterobacteria (Sonnenborn, 2016). Indeed, subsequent studies have shown that EcN produces microcins, a class of small bacteriocins that eliminate pathogenic bacterial strains by blocking vital functions in the target cell (Scaldaferri et al., 2016). As well, EcN demonstrate immunomodulatory activities such as reducing pro-inflammatory cytokines (IL-2, TNF-α, IFNγ) and increasing anti-inflammatory cytokines by peripheral blood mononuclear cells (Scaldaferri et al., 2016). There has since been countless in vitro and in vivo studies that characterized EcN as a nonpathogenic probiotic strain, including clinical trials ranging from newborns to patients with gastrointestinal disorders such as Ulcerative Colitis (Sonnenborn & Schulze, 2009). As of today, this strain is available in both capsule and suspension form under the trademark Mutaflor®, available for purchase in Germany, Canada, Finland, and Australia (Pharma-Zentrale, n.d.).

Despite the apparent benefits, when consulting Dr. Michael Surette, an established professor of medicine at McMaster University and the Canada Research Chair in Interdisciplinary Microbiome Research, we were alerted by one crucial concern of EcN: genotoxicity. Many previous studies concluded in confidence that EcN does not produce toxins from pathogenic E. coli strains, and has an overall low toxicological potential and high safety profile (Sonnenborn & Schulze, 2009). However, in 2006, Nougayrède et al. found EcN to contain a pks pathogenicity island that codes for nonribosomal peptide megasynthases (NRPS) and polyketide megasynthases (PKS). The NRPS/PKS machinery is responsible for producing a genotoxin called colibactin (Bian et al., 2015), which is considered cytotoxic for its ability to induce DNA alkylation and subsequently double-stranded breaks (Tripathi & Bruner, 2021). The pks island has been shown in in vivo studies to be responsible for genomic instability (Cuevas-Ramos et al., 2010) and cell senescence that stimulated tumour growth (Dalmasso et al., 2014). Most concerningly, E.coli strains expressing the pks pathogenic island have been found through whole-genome sequencing of organoids to elevate the risk of developing cancer (Pleguezuelos-Manzano et al., 2020). In addition, the well-known probiotic and immunomodulatory activity of EcN may ironically stem from its genotoxicity potential (Olier et al., 2012).

Of course, there are also counterarguments for this debate, such as Dubbert et al. (2020) who used in vitro mutagenicity assay as well as in vivo feeding tests in mice to test the genotoxicity potential of EcN but did not find notable things of concern. However, Nougayrède et al. (2021) pointed out a flaw in their reporter assay which may have been affected by microcins produced by EcN. As well, they only observed DNA damage for less than 1 month while exposure to pks+ E.coli population may take longer to induce oncogenesis. Above all, regardless of existing counter-arguments, the nature of the debate provides sufficient reason for therapeutic projects to consider other bacteria as chassis as there is yet to be evidence that can demonstrate long-term safety and absence of severe side effects of EcN supplementation, including cancer development or DNA damage. We advise future iGEM teams to take these findings into consideration in their chassis selection rather than solely considering EcN’s history as an effective probiotic.

Novel delivery systems for probiotic bacteria is an active area of research as there is a need to protect probiotic bacteria as they make their way to the gastrointestinal tract, the site of action. As they make their journey to the GI tract, these bacteria are exposed to extreme conditions, such as the low pH of the gastric juice, which are not compatible with their survival. This decreases the efficacy of the probiotic as a high number of cells must reach the site of action to be efficacious. Therefore, novel delivery systems must be able to protect the probiotic cells until they reach the GI tract where they can colonize the gut and undergo their mechanism of action.

Polysaccharide-based hydrogels are a novel delivery system which can protect probiotic bacteria and in turn increase their efficacy. These hydrogels meet the requirements for a protective delivery system as they: (1) provide a protective layer surrounding the probiotic which can withstand the acidic stomach environment and (2) can be triggered by the intestinal environment (pH and pancreatic enzymes) to decompose, releasing the probiotic. This is due to the properties of the polysaccharides comprising the hydrogel, such as alginate, carrageenan, xanthan, pectin, and chitosan, which allow for this to occur.

To ensure efficacy of this delivery system, the encapsulation of bacterial cells in the polysaccharide matrix must occur in mild temperatures and pH to prevent degredation of the probiotic. These polysaccharide hydrogels can be produced without requiring harsh reaction conditions through an ionic gelation method. This method relies on electrostatic forces to form cross-linking within the polymer, therefore does not require the use of any toxic crosslinking reagents.

Overall, polysaccharide hydrogels act as a very promising protective delivery system for our designed probiotic. These hydrogels can be produced under mild conditions, conducive with bacterial survival, and can be done with relatively low cost. In addition, these hydrogels are non-toxic, compatible with cell survival, and can withstand harsh conditions while undergoing triggered breakdown in the GI tract. As such, using a polysaccharide hydrogel as a delivery system for our probiotic will increase its efficacy while not raising any safety concerns for patients. 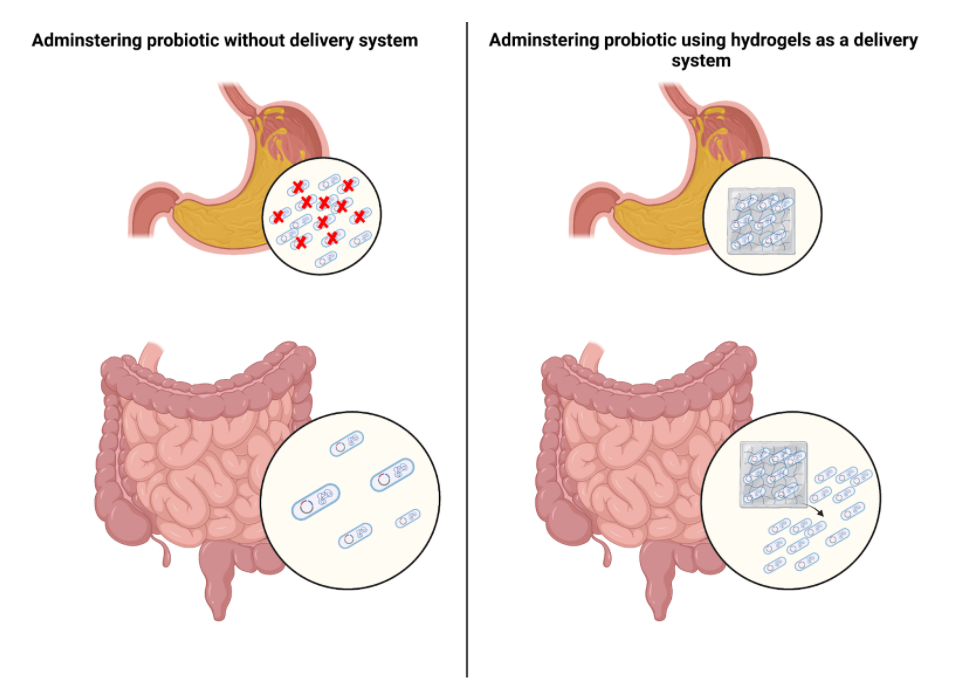 Probiotics are used to help maintain a healthy balance between the good and bad bacteria. Probiotics are most commonly used for treating infections, boosting the immune system, reducing allergies and inflammation, etc. Administration of probiotics is highly dependent on the intended use. Multiple factors play a role in delivering probiotics to the human gut. These factors include stability against gastric acid and adherence to the intestinal walls. They can be either taken as a conventional pharmacological method such as drugs or non-conventional method such as in food ingredients. The main difference between the two delivery methods is the formulation process, the dose, and the ability to survive in different physiological conditions of the human gut. Probiotics taken as drugs are much more viable and effective than other administration methods. These can come in the form of tablets, capsules, powder, liquids, and other such forms. Instead of a single strain, these products include a mixed culture of live organisms. These formulations are specifically designed to deliver the functional bacteria in the correct dosage while providing protections from harsh gastric environments. Probiotics embedded in food-based products include cheese, yogurt, milk, meat, etc. Other sources of probiotics can also come from fermented food such as kimchi, kombucha, pickles, miso, etc. Food-based products have the ability to deliver the probiotic bacteria alongside with the benefits of ingesting that product. These can be considered a good delivery of probiotics as they are easily available and convenient for the consumers. Both methods consist of similar challenges. One of the main challenges is for the microorganism to survive the acidic gastric environment. Many of the microorganisms die before reaching the intestine and thus having an adequate amount of microorganism delivered to the intestine is also a challenge for both of the methods. For a microorganism to deliver visible effects on the body, there must be at least 108-109 viable cells available in the gut. Different bacteria have different resistivity to the acidic environment of the stomach. For instance, Lactobacillus is able to survive the harsh gastric conditions more than other species.

It avoids loss of probiotic viability during processing, storage and digestion. It is a long-term preservation method for probiotic cultures that involves suspending the bacterial culture in a dormant state via a process of freezing and dehydration. These cells are distinctly characterized by impaired levels of growth, reproduction, and metabolic activity, which is necessary to prevent cell stress and cell death along the shelf life of the product. Lyophilized bacteria take the form of a fine white powder that can then be stored in enteric capsules, built to withstand the acidic environment of the stomach. Once the capsule hits the small intestines, the presence of adequate water and nutrients, along with the proper temperature and pH, rev up bacteria into metabolic activity.

Lyophilization is a 3 stage process which consists of a freezing, sublimation, and adsorption phase. The bacterial culture is quickly frozen at very low temperatures below the triple point. Rapid cooling is necessary to prevent the formation of large ice crystals that may rupture cell membranes, while temperatures below the triple point ensure that sublimation rather than melting will occur. Frozen water is removed by a gentle process of evaporation at low pressure and temperature in a vacuum. This process removes approx. 95% of the water from both the bacteria and its environment. Lastly, the temperature is raised to remove the ionically bound water molecules. This advances the freeze-drying process and ensures that water activity is as close to 0 as possible so that no metabolic activity will take place during the shelf life of the product.

Lyophilization can damage cell viability because the freezing of extracellular water results in an osmotic imbalance that dehydrates the cells while the formation of ice crystals mechanically disrupts the cell membrane. Thus the presence of cryoprotectants in the drying medium is required to increase the viability of cells after lyophilization. Use glycerol as a cryoprotective compound to depress the freezing point of the bacterial cells, thus enhancing supercooling by forming strong h-bonds with water molecules and competing with water-water h-bonding. This disrupts the crystal lattice formation of ice and results in the formation of large unfrozen pockets of liquid that reduces cellular damage associated with mechanical freezing and osmotic imbalance. 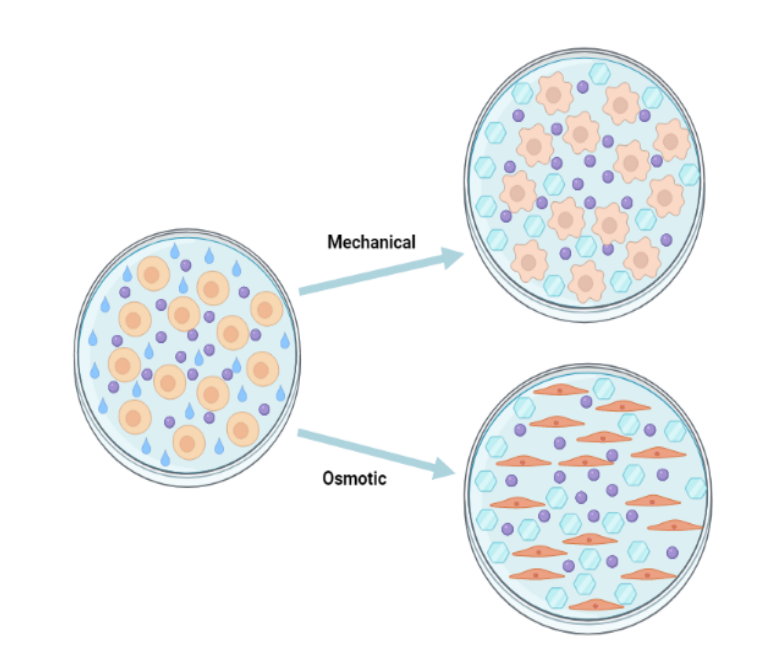