How can we help the public learn more about IBD?

Although Canada is found to have the highest number of Inflammatory Bowel Disease (IBD) cases in the world, IBD is not a major topic of discussions. According to the “2018 Impact of Inflammatory Bowel Disease in Canada” it was reported that 270,000 Canadians had been diagnosed with IBD, with that number expected to rise to 400,000 individuals (approximately 1% of the Canadian population) by the year 2030. Combining these statistics and the lack of discussion of this major disease, our team focused on raising awareness and educating several communities within Canada about Inflammatory Bowel Disease. In fact, in honor of World IBD day, the outreach team targeted specific regions in Ontario with a large youth population to have the most prominent impact. We felt it was important to not only focus on educating the broad community but also our close surrounding community. By publishing in local news outlets we were able to reach a population that may not be familiar with our social media outlets. As a result, the team was successful in publishing a news article based on relevant research materials gathered, in various news outlets including, The Standard, Niagara Falls Review, Welland Tribute as well as the reader's choice award winner, The Hamilton spectator. The article covered several important topics including a breakdown of the disease itself, the stigma surrounding the topic, as well as various social and economical aspects that are tied into this complex topic. Publications such as the one made on The Hamilton Spectator, with an average viewer count of over 7 million page viewers, allowed our team to further extend community outreach initiatives to educate the public about inflammatory Bowel Disease and several other topics surrounding this disease that we found to be of great value. 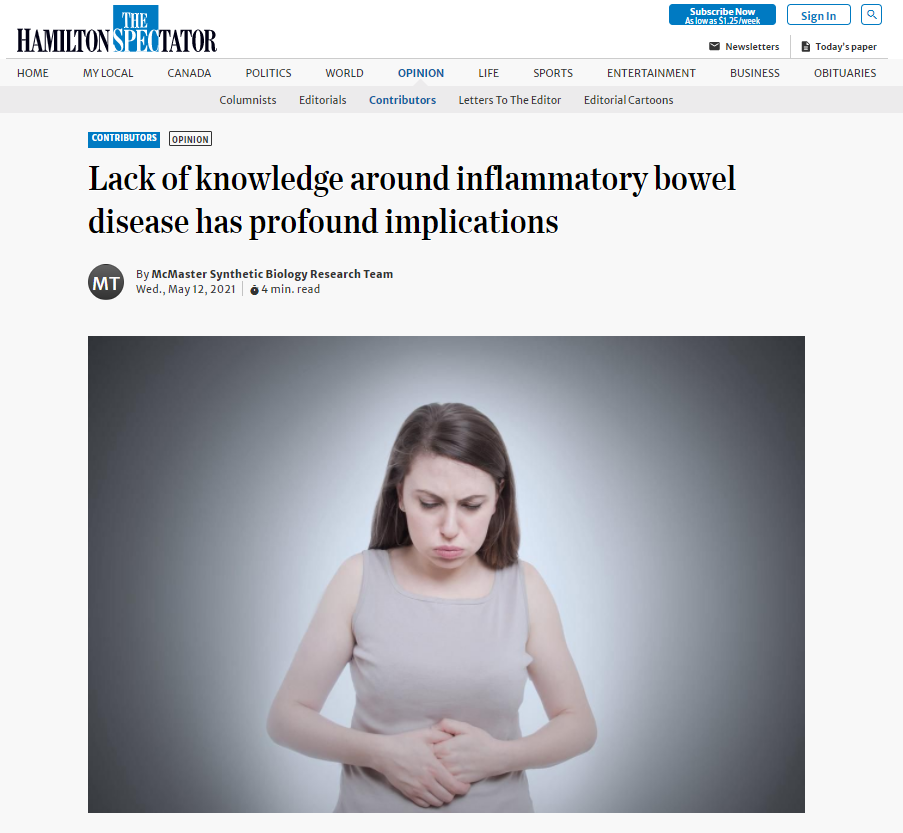 Trivia Night: What is IBD? 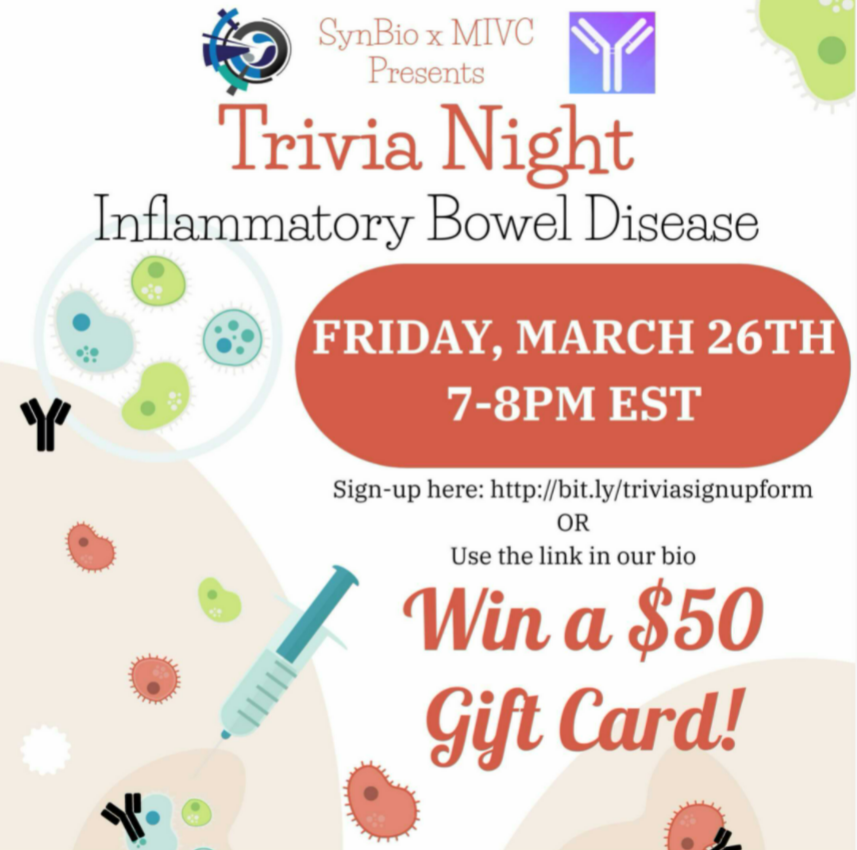 Although we had initiatives focused on global outreach or international collaboration, we also wanted to educate those locally given that the incidence of IBD in Canada is one of the highest in the world. In order to maximize our impact, we aimed to work with other clubs and initiatives. Working together with the Immunology and Virology Club at our university, we hosted a trivia night on IBD. The logistics of the event included having registered participants read a document on the type of information we would be quizzing on prior to attending, a 15-minute presentation on IBD given by our team at the start of the event, and 20 quiz questions on some of the main facts and misconceptions about IBD hosted on kahooit.it; a game-based learning platform. At the end of our event, we awarded the highest scoring participant with a $25 gift card which we hoped would encourage more participants to learn about IBD. We also suggested to our event attendees to get involved with organizations like Crohn’s and Colitis Canada or the Canadian Digestive Health Foundation should they want to make a difference in the lives of IBD patients. We also shared our project with other McMaster students, took feedback, and answered any questions and concerns about our research. As the first educational event we hosted, we hoped this would increase conversations about IBD at our school.

After having published an article on Inflammatory Bowel Disease (IBD) in the Hamilton Spectator, we asked ourselves how we could broaden our community impact. Given that newspapers and online articles may not be the preferred form of media by some, we thought of creating a series of animated videos that would distill the same important message we had in our article but make it more accessible to people worldwide. This project required us to separate our article into three individual videos, each less than a minute long in length. To improve our science communication, we also used visuals that were relatable and suited to a general audience.

Our first video tackled what IBD entails given the misconceptions about what someone actually experiences. Furthermore, IBD may be mistaken for other gastrointestinal disorders such as Irritable Bowel Syndrome (IBS). In this first video, we present where IBD occurs in the body, the most common signs and symptoms, as well as the impact of lifestyle and environment.

Our second video highlighted the population affected by IBD. This included not just the implications it had on finances and career development, but also what it meant for social interactions and mental health. We also emphasized that while most patients are diagnosed between the ages of 15 - 35, a quarter of IBD cases worldwide are in children which has profound implications on normal development.

Finally, our third video gave viewers insight into progress regarding IBD in the academic and medical world. We chose to highlight immune dysregulation and the role of bacteria in the pathogenesis of IBD as well as literature on diet in managing symptoms. We also chose to provide fellow Canadians with resources for more information by referring them to both Chron’s and Colitis Canada and the Canadian Digestive Health Foundation (CDHF).

By sharing these videos on various social media outlets, we garnered more than 1000 views. Additionally, CDHF shared our videos on their social media which attracted even more attention to the issue of IBD. This helped expand our educational outreach initiative from a single article in a local newspaper to something that could be easily viewed by anyone worldwide.

Inflammatory Bowel Disease (IBD) diagnosis and prevalence in Canada have been among the highest in the world. More notably, all age groups are susceptible to this disease with the most common diagnosis being made in adolescents and young adults (15-35). Thus we found that it was important for us to educate the younger generation on this condition and how environmental factors such as diet and lifestyle can put individuals at higher risk of diagnosis. To find our target audience the team analyzed several research papers to try and locate where exactly in Canada IBD diagnosis was on the rise. According to a paper published in the Journal of the Canadian Association of Gastroenterology in 2018, it was found that the province of Nova Scotia had the highest incidence of IBD reported, at a worrying rate of “54.6 per 100,000 people (1996 to 2009)”. We found it our mission to target schools and education centers in Nova Scotia to educate them on this condition. Upon contacting various schools and education centers, our hardworking team was able to communicate with a STEM summer program in Nova Scotia that gave us an opportunity to present to children ages 5 and up the information we had gathered. Our presentation consisted of topics relating to the gut microbiome, intestinal health, Inflammatory Bowel Disease (what it is, symptoms, and diagnosis), as well as dietary factors that help to improve gut health. According to a survey that was completed during the beginning of our presentation, we found that most students were not aware of the intestine being an organ, with only two of the students actually naming the intestine as an organ. Upon completion of the presentation however, students completed a fun Kahoot game which included topics relating to Inflammatory Bowel Disease and students were successful in answering the questions correctly. This indicated that the students had gained a better understanding of the topics presented to them which fulfilled our ultimate goal. We successfully presented these valuable topics to various groups of children- roughly 150 students- within the STEM program and received positive feedback such as “this is a perfect presentation for younger students” and a personalized letter for the team. Additionally, before the presentation, we asked the students to name an organ that they thought was susceptible to disease and what we saw from the results was that very few students named the intestine as an organ that can become ill. However, upon our presentation the students successfully answered questions relating to gut health and dietary factors which concluded that our presentation was successful in raising awareness and educating the younger generation about the emerging disease of the digestive system. 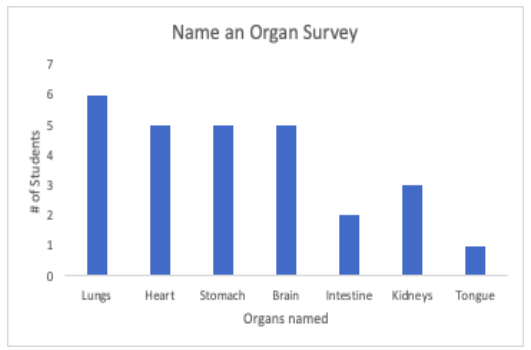