What was the experimental workflow and process of our project?
Detection Module Effector Module Timeline

For the detailed design process, please refer to the following page: Design 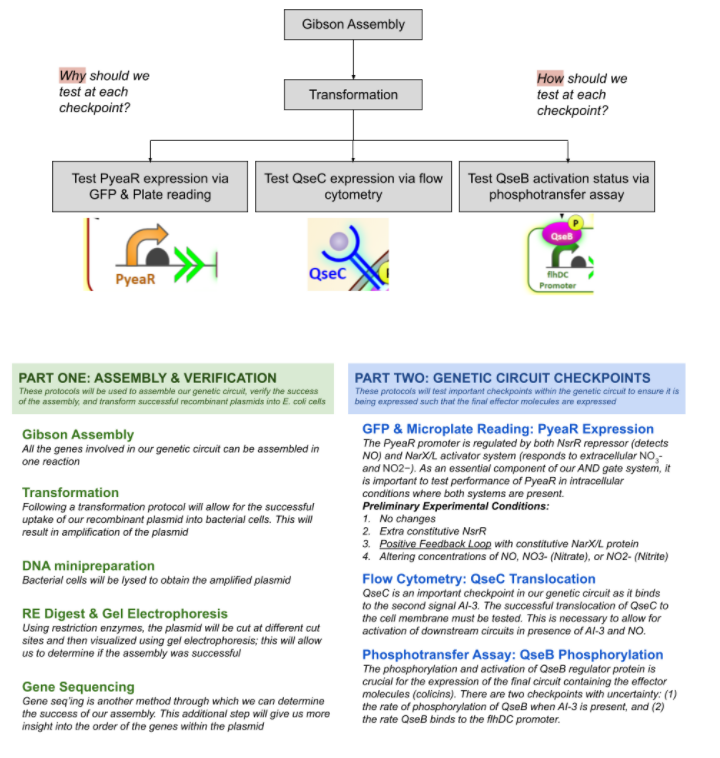 In our project, our circuits will express colicin E1 and E9 upon activation of a nitric oxide and autoinducer 3 AND gate. 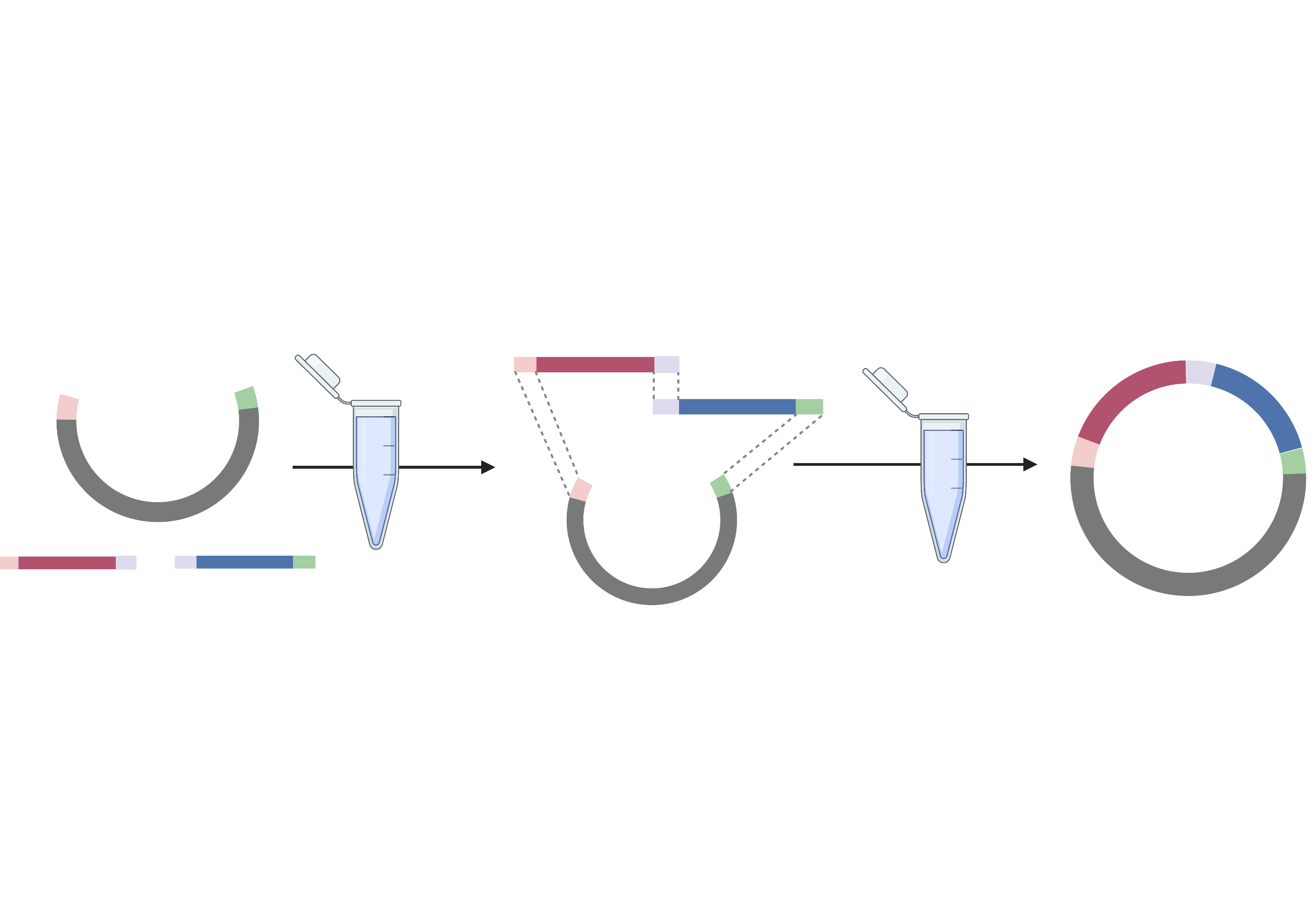 Green Fluorescent Protein (GFP) will be fused to the PyeaR promotor and its transcript to understand the activity and regulation of PyeaR. The intensity of GFP expression will be determined using microplate reading to understand the effect of different factors, such as presence of NO and the NarX/L feedback system, on PyeaR activation.

In our circuit design, QseB binds to the flhDC promoter in order to regulate the expression of the final circuit module containing the effector colicin molecules. As such, it is a crucial connector between the AND gate detection module and the effector module. Thus, we plan to study QseC phosphate transfer to QseB, a critical component to this process, by examining QseB phosphorylation status using phosphotransfer assay. Phosphotransfer reactions will be performed, whereupon take autophosphorylated radiolabeled QseC protein is mixed with the response regulator or with the water control so that the proteins can then be resolved on 15% SDS-PAGE and visualized for the presence of γ32P using autoradiography. The link to a more detailed protocol and a sample result can be found below. 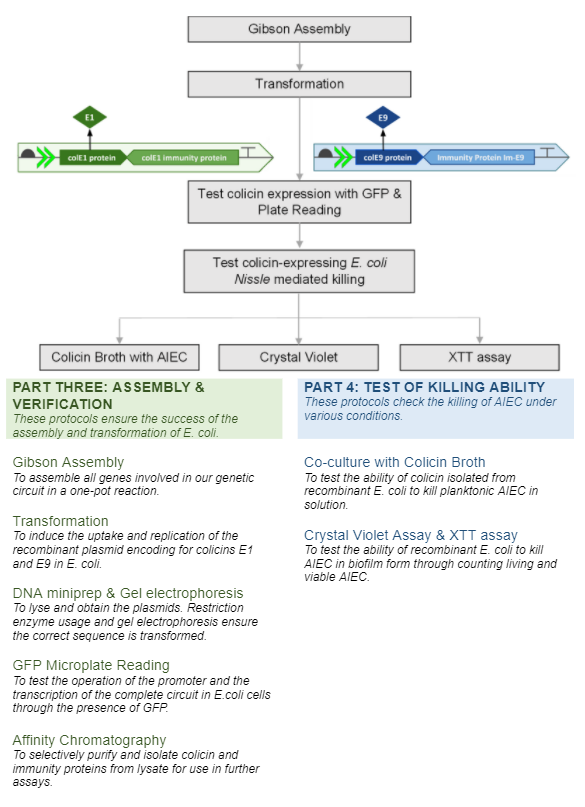 Affinity chromatography is a separation technique that is used to isolate proteins that are highly selective towards an immobilized ligand inside the chromatography column. This purification method is used to isolate the colicins proteins from the cell lysate for use in downstream experiments. Both colicin polypeptides have a His tag attached to the N-terminus which will bind strongly to the Ni2+ metal ion that is immobilized in the chromatography column. Imidazole is used to elute the colicin protein after the rest of the cell lysate has left the column. Imidazole completes with the his-tag and has a higher affinity for the metal resin, therefore it will displace the protein. Colicin protein is collected and processed through gel electrophoresis to verify it’s identity.

If final protein yield is too low: 1) increase size of the his-tag to increase affinity for the metal resin. 2) use higher concentration of imidazole to remove the bound proteins. 3) Hidden His-tag: purify the protein under denaturing conditions. After elution, renature the protein. OR add small linker sequence consisting of glycines to separate the tag from the protein. 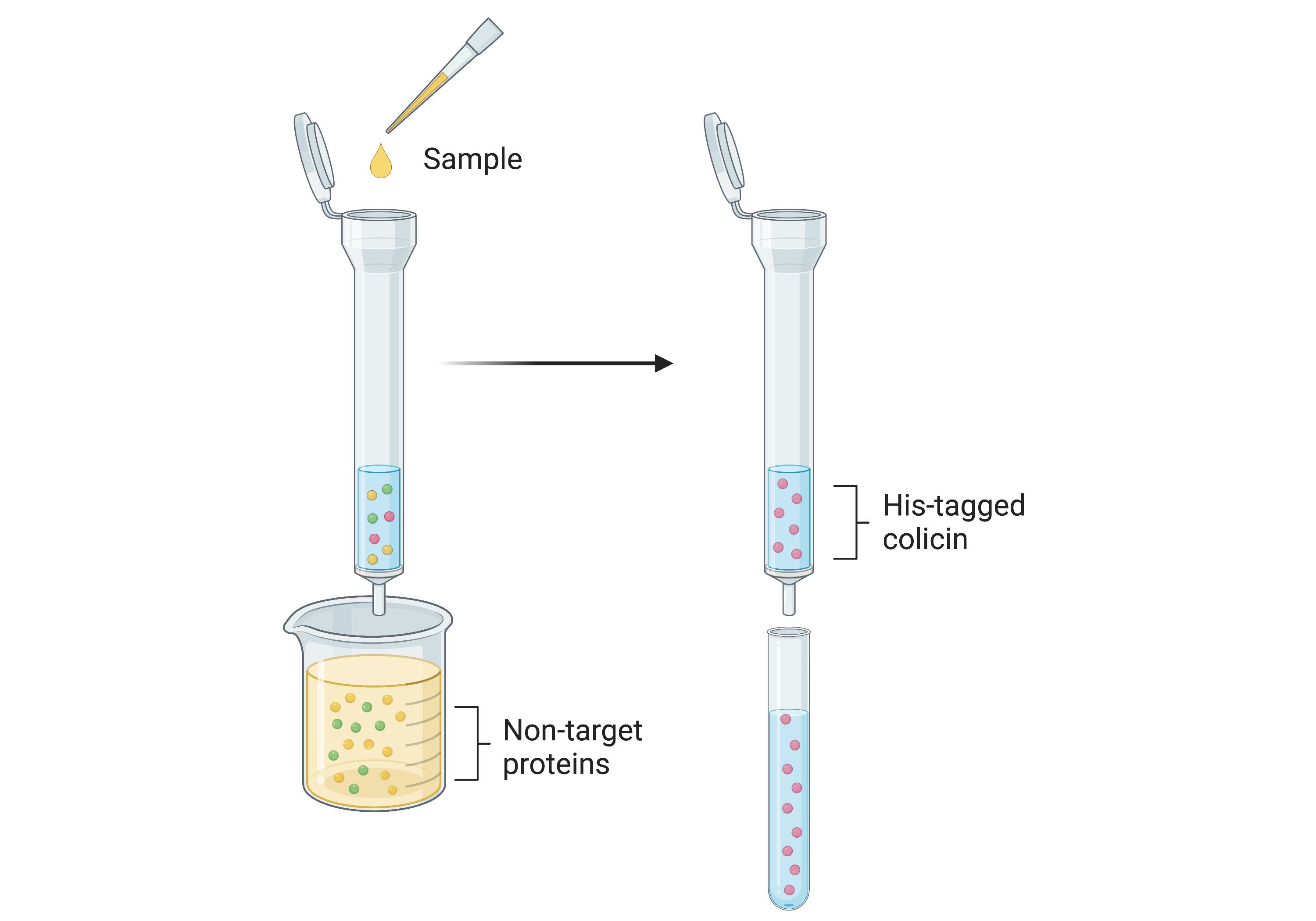 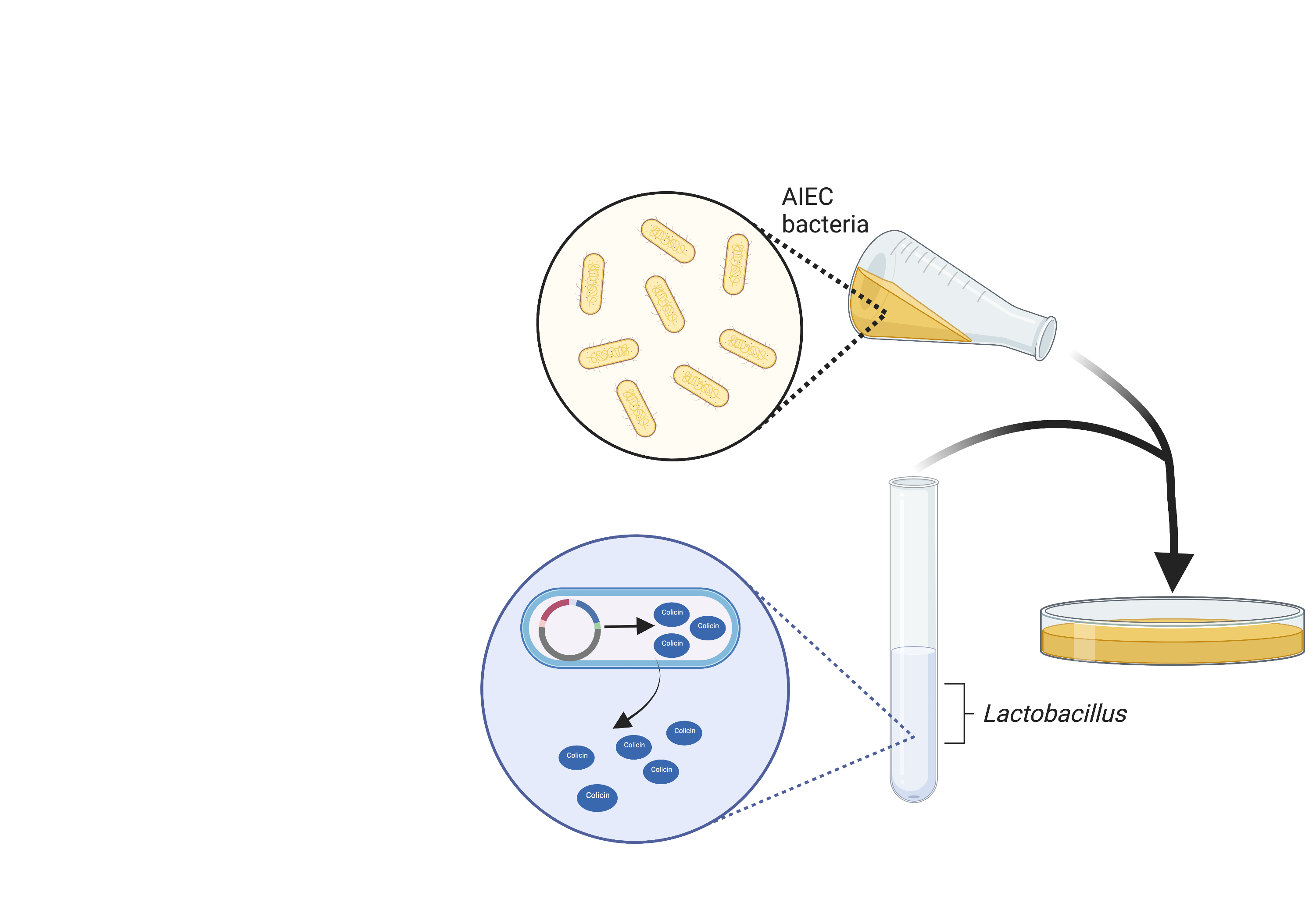 If the results are not as expected, here are some of the potential considerations for trouble shooting: 1) Scaling up/down molecules/nutrients for the bacteria to produce the expected response; 2)Increasing incubation period for expected bacterial growth; 3)Enforcing population density; 4)Adjusting pH, dilution factor of media, etc.

For our project, CV will dye both AIEC and E. coli Nissle, as such a baseline sample containing only Nissle will be used as a comparator. From this experiment, we will determine the amount of AIEC cells present to evaluate the efficiency of our colicin-producing EcN in reducing AIEC population. 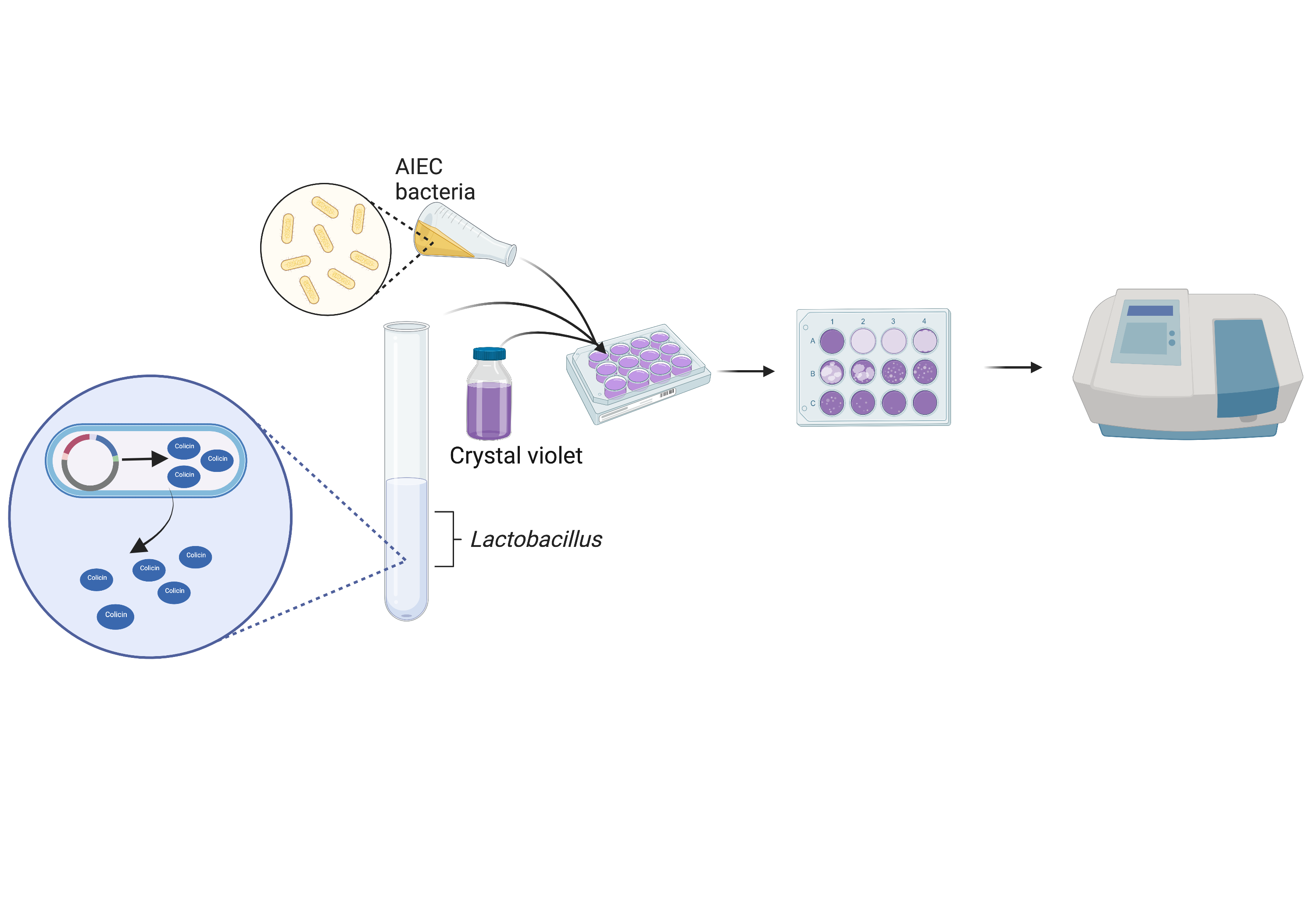 Because CV stains both living and dead cells (Schiebel et al., 2017), a separate colorimetric XTT assay will be performed to quantify the number of living cells. XTT (sodium 3'-[1-[(phenylamino)-carbony]-3,4-tetrazolium]-bis(4-methoxy-6-nitro)benzene-sulfonic acid hydrate) is a tetrazolium salt that is reduced to formazan by metabolizing, living bacterial cells (Kuhn et al., 2003). AIEC in biofilms will either be exposed to the supernatant of our engineered bacteria and or be co-cultured, and the number of surviving AIEC cells is quantified by the XTT absorption measured. This indicates the efficiency of colicin-production by our modified-Nissle bacteria and the effectiveness of colicin in AIEC in a biofilm state. Similar processes were used before for E. coli cultures and P. aeruginosa supernatant (Lopes et al., 2011), but if there are issues the following steps can be taken. 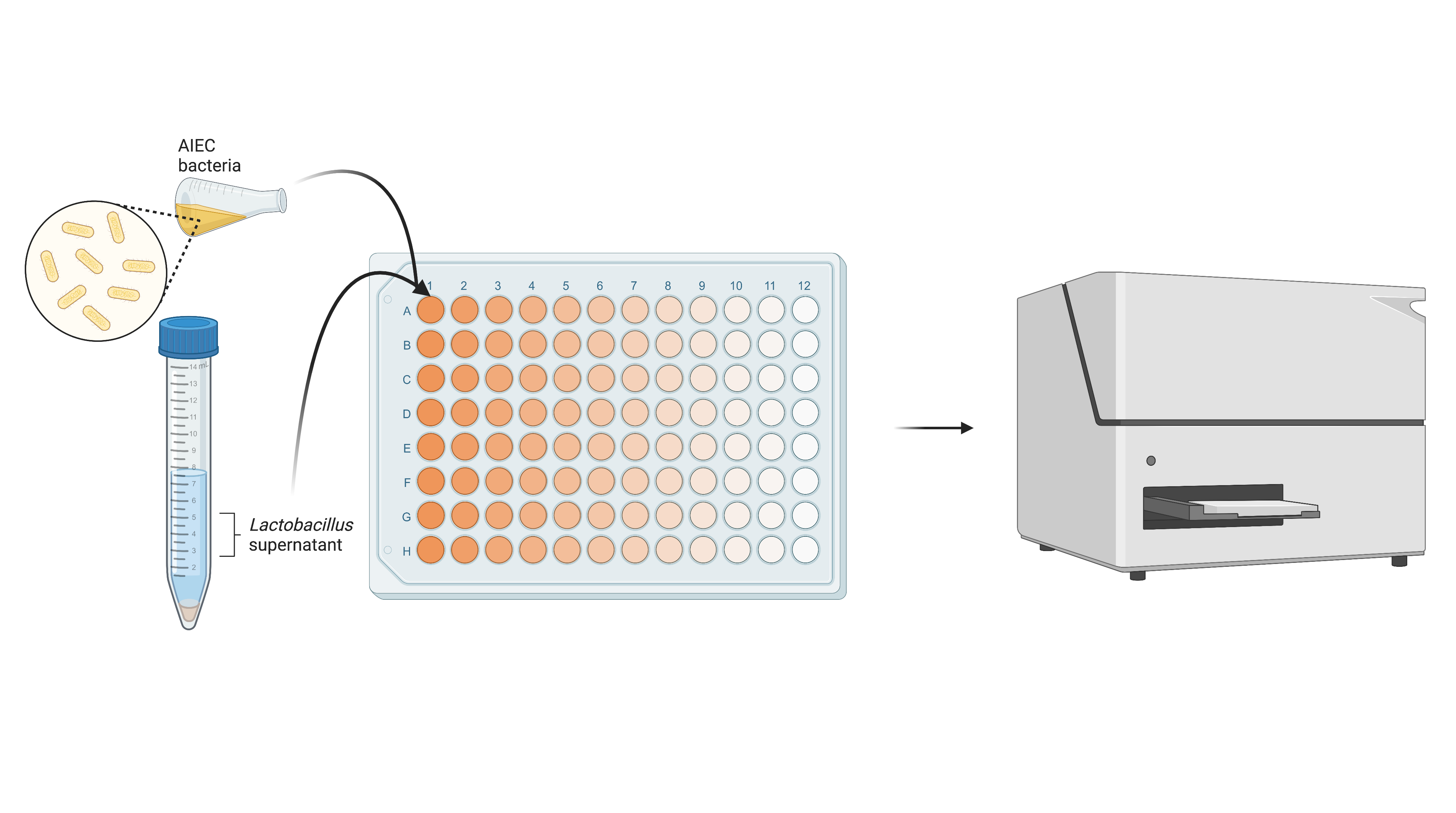 Using crystal violet and the 96 well plates we can quantitatively determine biofilm viability. This is an improvement to the existing biofilm metabolic assays that can have significant error. This is done by deriving the specific growth rate of a bacteria biofilm from a series of metabolic assays using pH indicator phenol red, aiding in the quantification of the relative number of viable bacteria in a biofilm. This is of great importance as it allows us to monitor the condition of the AIEC biofilms that we are targeting. Growth or increase in growth would indicate a mistake in our circuit, and decreased growth and number of viable cells in the biofuel would indicate our circuit’s performance as less viable cells in the biofilm indicate cell death by colicins. A parameter that this method finds is the specific growth rate of the bacteria at a point in time, indicating our circuit's performance at a period of time.