How are we conducting our experimental investigations?
Detection Module Effector Module 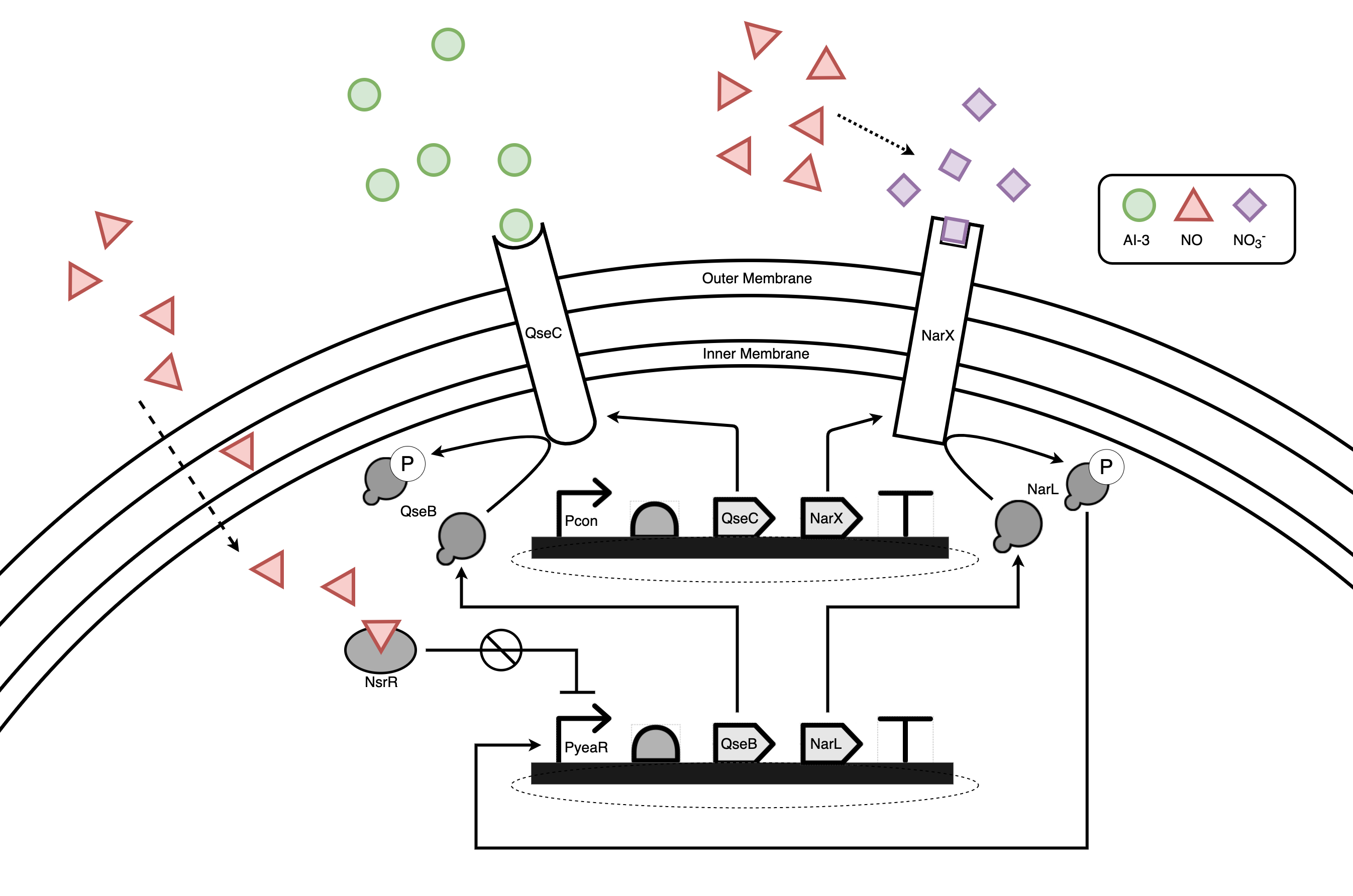 The PyeaR promoter (Parts:BBa_K216005 or BBa_K381001 or BBa_2967017), from the iGEM Registry of Standard Biological Parts, is a nitrate/nitrite/nitric oxide-responsive promoter of the E. coli yeaR/yoaG operon (Part:BBa K216005, Part:BBa K381001, Part:BBa K2967017). This promoter was designed by BCCS-Bristol in iGEM 2010 originally, and then modified by other iGEM groups. PyeaR promoter is functional under aerobic conditions, although it is more strongly induced under anaerobic conditions, and is regulated by phosphoNarL, a transcriptional regulator which activates gene expression in response to nitrate (Part:BBa K216005, Part:BBa K381001, Part:BBa K2967017).

NsrR, a protein native to most E. coli cells, represses the promoter when NO sources like nitrate or nitrite are absent (Part:BBa K381001). Once NO enters E. coli cells, either from inflamed surroundings or the cellular conversion of nitrates or nitrites, NO will bind to the repressor protein NsR, and halt its repression of PyeaR, thereby allowing the transcription of downstream genes (Part:BBa K216005, Part:BBa K381001, Part:BBa K2967017). Past iGEM groups have found PyeaR activation to be effective in a NO concentration that is often present in the inflamed gut environment of IBD patients, which is a concentration of 5.5 μM (Rolhion & Darfeuille-Michaud, 2007), (Lin et al., 2007). Past iGEM groups have also increased the sensitivity of this promoter by adding an additional NsrR binding sequence downstream of the promoter. In conclusion, the use of the PyeaR promoter is useful for creating genetic circuits that heavily implicate NO’s role in inflammation of the gut in patients with ulcerative colitis or Crohn’s disease.

As the first sensor to detect an input of NO, NsrR is undoubtedly the most crucial part of our AND gate design. However, its performance under physiological conditions within the human intestinal tract is unpredictable. Specifically, NO has been reported to have a short half-life of 11.4 seconds in the presence of hemoglobin and oxygen (Hakim et al., 1996). In an aqueous medium, NO has a half-life of 445 seconds (Hakim et al., 1996). When hemoglobin is present, NO binds to it to form nitrosyl hemoglobin (NOHb) (Hakim et al., 1996). This complex remains stable until oxygen becomes present, in which case NOHb will be oxidized to form methemoglobin (Hb3+) and nitrate (NO3-) (Hakim et al., 1996; Lundberg et al., 2004). The human gastrointestinal tract demonstrates a vertical oxygen gradient which ranges from a partial pressure of ∼42 mm Hg within the vascularized subepithelial mucosa to a partial pressure of ~3 to 11 mmHg within the anaerobic epithelial lumen within the colon (Singhal & Shah, 2020). While aerobic bacteria in the microbiota are responsible for maintaining a hypoxic intestinal microenvironment, endogenously-produced NO can potentially come into contact with oxygen and hemoglobin, resulting in a shorter half-life of NO that is unable to bind to NsrR for a long period of time. The direct consequence of this phenomenon would be a decreased rate of QseB regulatory protein production due to prolonged NsrR repression, ultimately leading to a short-lived downstream colicin production timespan. This problem is further exaggerated by the anti-leakage design of the PyeaR promoter that we are using, created by iGEM team NEU_China 2019 who inserted an extra NsrR binding sequence to reduce the sensor’s basal expression.

An ideal system design should be inhibited when no input is present and amplified as soon as the input is detected, which leads to increased efficiency of activation and reduced threshold for response. As such, we proposed a positive feedback mechanism for the PyeaR promoter using the NarX/L two-component regulatory system. Similar to the set-up in the QseBC system, NarX is a nitrate sensor which phosphorylates the NarL regulatory protein upon activation (Lin et al., 2007). The yeaR-yoaG operon contains a consensus sequence with the binding sites of the NsrR repressor and the NarL activator (Lin et al., 2007). In other words, the PyeaR promoter is simultaneously activated by NarL in the presence of nitrate (as sensed by NarX) and repressed by the NsrR protein in the absence of NO (Lin et al., 2007).

Woo et al. (2020) have previously designed a nitrate-responsive genetic circuit by constitutively expressing NarX and NarL and regulating a reporter gene expression through the PyeaR promoter. Our positive feedback system will also constitutively express NarX for the detection of nitrate, but the production of NarL will be regulated by the PyeaR promoter, which is normally repressed by the NsrR protein when NO is absent. When NO is present, however, NsrR leaves the PyeaR promoter and leads to transcription of NarL. With NO’s relatively short half-life, nitrate is likely to be present to activate NarX. Nevertheless, even if the constitutively expressed NarX sensor and nitrate are both present, downstream reactions should not be possible until NarL regulatory protein begins to be expressed, at which point the phosphorylated NarL will bind to PyeaR promoter. This leads to a positive feedback mechanism where even temporary pause in NsrR repression leads to continuous activation of PyeaR with amplified NarL production. 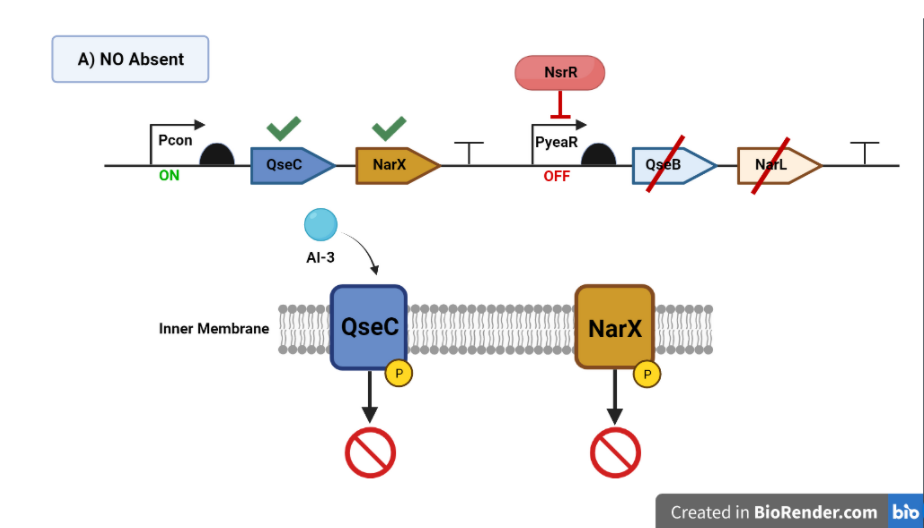 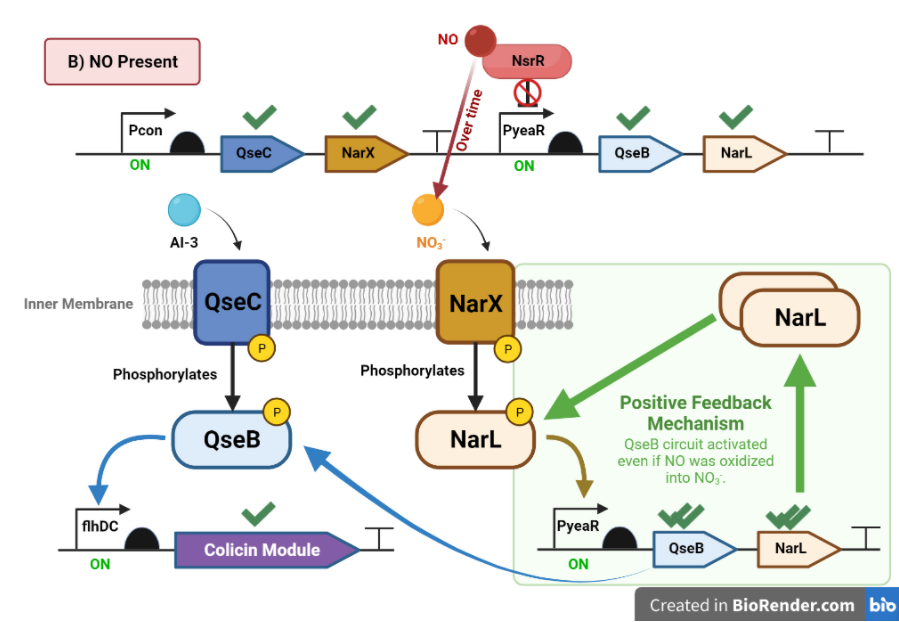 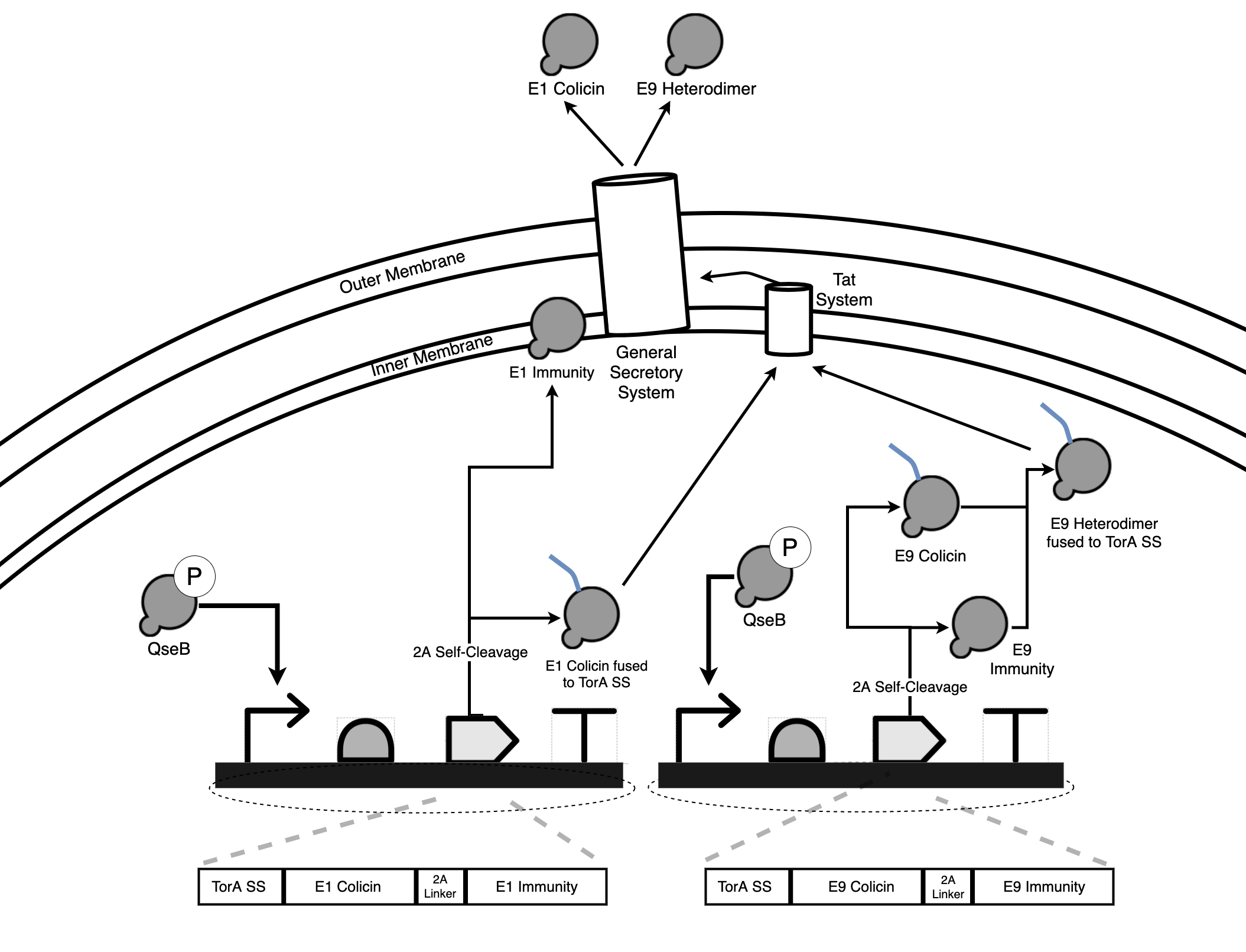 The E1, E9 and E1 and E9 immunity proteins are crucial parts to our circuit as the direct effectors in our module by which AIEC can be targeted. One plasmid in our circuit expresses the E1 colicin, a pore-forming bacteriocin (Gouaux, 1997; Masi et al., 2007), while th either expresses E9 colicin, a DNase (Mosbahi et al., 2004). The flhDC promoter (Clarke & Sperandio, 2005) will induce their transcription, allowing the colicin’s unique mechanisms to target AIEC. The respective E1 Immunity protein protects the host cell from creating pores through properties of being an integral proton in the inner membrane. The E9 immunity protein binds to E9 in a heterodimer to prevent DNase activity in the host cell. The E1 coding sequence contains TorA signal sequence (BBa_K3114005), E1 colicin protein (BBa_K4010001), 2A linker sequence (BBa_K2976010), and E1 immunity protein (BBa_K4010002). Each colicin and protein are essential parts to the circuit as they work towards targeting the AIEC and effectively reducing inflammation in the gut for IBD patients.

Natural colicin-releasing E.coli normally uses the Kil protein to induce cell lysis, which would create pores and release colicins into extracellular space. This lysis mechanism would be inappropriate to use in the colon due to the release of unknown pathogen-associated molecular patterns (PAMPs) that may further activate innate immune responses and exacerbate inflammatory activities.

While previous iGEM teams used the Kil protein (BBa_K797003), we determined that this mechanism would be unsuitable for use in the colon. Hence, we designed a novel mechanism of releasing colicin using native TorA and Type 2 secretion elements in E.coli. The TorA signal sequence is fused to the E1 colicin and E9-E9 immunity heterodimer, which allows both proteins to migrate through the inner membrane using the native Tat transportation system. Once in the periplasm, the native general secretory pathway secretes both colicins into the extracellular space through the Type 2 secretion system. While multiple other transport systems could have been employed, TorA was more effective than other tested signal sequences in transporting fully or partially folded proteins into the periplasm. Ultimately, this novel mechanism of releasing colicin prevents the undesired effects of E.coli lysis and allows the system to continuously secrete colicin when conditions are met.

A his-tag was added at the N-terminus of both colicin polypeptides in order to isolate both proteins during immobilized metal affinity chromatography. The polyhistidine residues have high affinity for the immobilized Ni2+ metal resins and this interaction will selectively remove the colicins proteins from the rest of the cell lysate.