Why should we investigate IBD, and what are some of the current treatment options?

Inflammatory bowel disease (IBD) is a group of autoimmune diseases characterized by inflammation in the intestines. One of the two existing subtypes of IBD is Crohn's disease (CD), distinguished by interspersed areas of inflammation. The incidence of IBD is on the rise, and Canada has among the highest prevalence globally. As of 2018, 270 000 Canadians are affected by IBD, and this number is expected to rise to 403 000 by the year 2030 (Kaplan et al., 2019). The direct cost of caring for individuals with IBD, which reached $1.28 billion in 2018, places a significant strain on the Canadian healthcare system (Kuenzig et al., 2019).

The pathogenesis of IBD encompasses both genetic and environmental factors. A dominant hypothesis suggests that IBD is exacerbated by an alteration of gut microbiota (Xia et al., 1998). The human gut microbiome consists of a dynamic and diverse community of commensal microorganisms that display a mutually symbiotic relationship with the host. The host provides a nutrient-rich environment for the microbiota, which in turn supports many physiological functions of the host, including fermentation of polysaccharides and production of short-chain fatty acids. Thus, the coexistence between the microbiota and host is necessary to maintain healthy gut physiology (Belkaid & Hand, 2014).

Research has indicated significant differences between the microflora profile of healthy individuals and those suffering from IBD. While the mechanism remains uncertain, it has been suggested that any change in gut microbiota composition results in dysbiosis, subsequently deteriorating the relationship between microbiota and host. This disruption results in an alteration of associated functions that contributes to the development of intestinal inflammation (Khan et al., 2019). 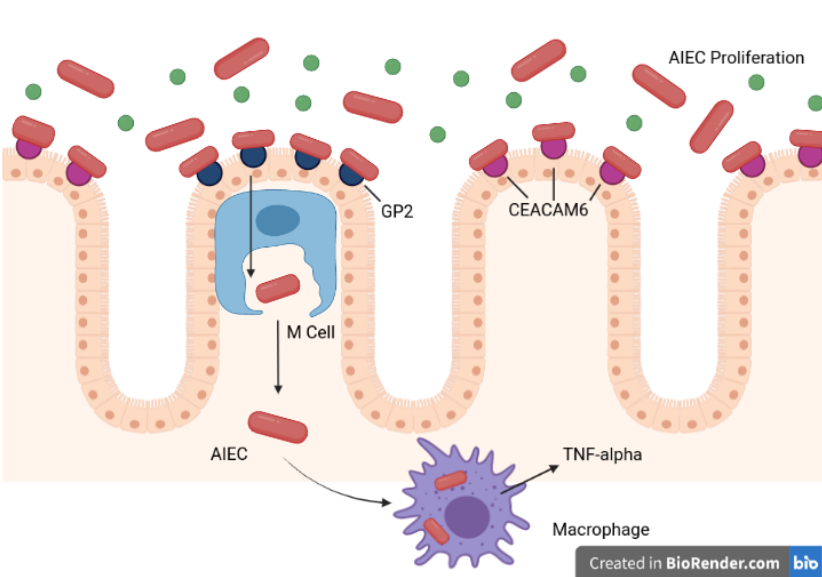 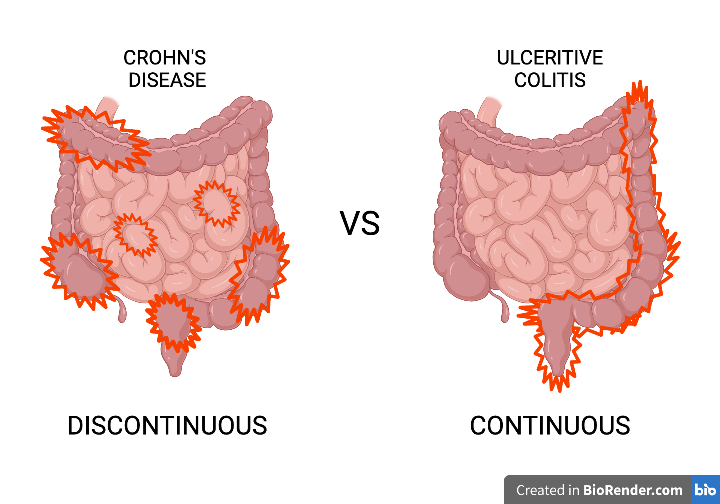 There is no cure for ulcerative colitis or Crohn’s disease, apart from invasive surgical intervention. Current medical treatments such as aminosalicylates (5-ASA), corticosteroids, and biologics only focus on controlling inflammation to achieve and maintain remission (Meier & Sturm, 2011). Mesalamine is a 5-ASA based-drug that is often used as the front-line treatment option for mild-to-moderate ulcerative colitis, however, only has a 15%-20% remission rate (Karagozian & Burakoff, 2007). Mesalamine and other 5-ASA, decreases inflammation in the colon by reducing production of inflammatory molecules, prostaglandins and leukotrienes (Karagozian & Burakoff, 2007). Corticosteroids are fast-acting and potent when trying to achieve remission but fail to maintain a healthy state and serious side effects can result from prolonged use (Xu et al., 2004). Biologics, such as the monoclonal antibodies, infliximab and adalimumab, inhibit tumor necrosis factor (TNF-α) to stop the immune response (Sandborn & Faubion, 2004). While these drugs are deemed safer than corticosteroids, they lead to higher rates of infection and malignancies (Stallmach et al., 2010). Despite the progress made in treating IBD, there is a gap in providing a treatment that kills AIEC bacteria, which is known to instigate chronic inflammation by altering the gut microbiome (Chassaing et al., 2014).

Probiotics, live organisms such as bacteria that confer health benefit on hosts when adequately administered (Hill et al., 2014), have been under examination as a potential adjunctive therapy for IBD. Probiotic actions may include (1) immunomodulation by means of downregulating proinflammatory or inducing protective anti-inflammatory cytokines (Picardo et al., 2020), (2) maintaining intestinal epithelial barrier integrity (Yan & Polk, 2020), or (3) eliciting cytoprotective and antipathogenic responses (Fedorak & Madsen, 2004). Since both the microbiome and the degree of permeability of the gut barrier are key players in IBD progression (Jakubczyk et al., 2020), these mechanisms have therapeutic potential to ameliorate IBD symptoms. Our project focuses on removing AIEC bacteria, while also leveraging the benefits of probiotics in our implementation plan to create a better gut microbiome for IBD patients. 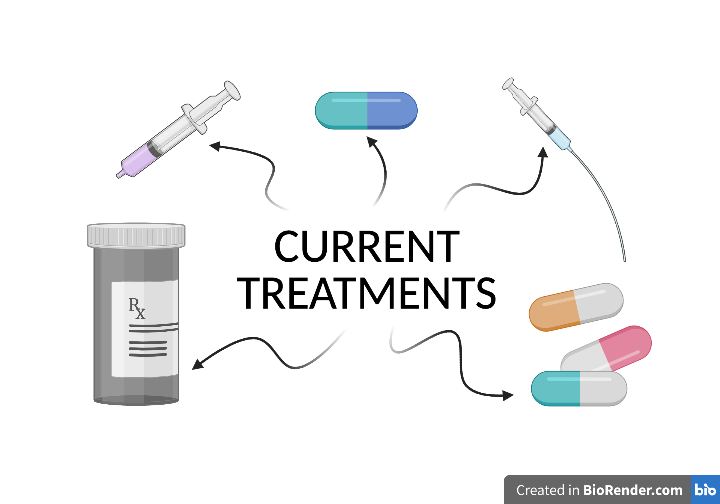 IBD impacts individuals to different extents in all aspects. As such, treatment plans need to be carefully designed in order to reduce each patient’s unique set of symptoms. Over the summer, we met virtually with a number of IBD patients and they shared their sentiments surrounding the desperation that many patients experience.

Certain treatments include immunosuppressive biologics that the body may reject or develop resistance towards. Having the body react erratically to the treatments that professionals suggest poses a risk of unintended side effects in the trial-based approach to treating IBD. The patient we spoke to has pursued multiple avenues of treatment, including Remicade infusions, to which they developed antibodies. Additionally, when they began the use of Humira, the patient initially responded well, however after some time developed complications including encephalitis. It is suspected that the drugs used in the treatment suppress the patient's immune system and lead to opportunistic viral infections - a prospect that continues to be investigated.

The overall takeaway from the patient feedback is that IBD treatments must be examined through a broad lens, which takes into account the multifaceted nature of the disease. Most patients will try almost any treatment that offers relief from their symptoms, even if it means subjecting themselves to disruptive and expensive methods. While current therapies may prove useful in alleviating certain symptoms, the disease as a whole requires further investigation into its various aspects as prevalence continues to grow worldwide.

*This section was written based on answers given by a current patient experiencing Crohn’s disease through an interview style process. Permission has been granted by the individual and reflects their personal observations and experience.

Past iGEM Projects on IBD

Many past iGEM teams have contributed to directions for IBD diagnosis or treatment. We have compiled the following table with a brief summary of their work, as well as their achievements and contributions for future projects. Those designs are not perfect. Firstly, many teams generalized their projects to gut inflammation without distinguishing between Ulcerative Colitis and Crohn’s Disease, the two major types of IBD. A few projects are outdated and are unlikely to succeed based on existing literature. In particular, retinoic acid, which was proposed by the Stanford_2009 iGEM team to promote immunosuppression, has been found to be elevated in Ulcerative Colitis patients and demonstrated a proinflammatory role (Rampal et al., 2020). As well, although the UFlorida 2018 iGEM team aimed to amplify butyrate production to ameliorate IBD symptoms, a study found butyrate consumption to be reduced in the active inflammation stage of IBD patients due to the influence of Tumour Necrosis Factor alpha (TNF alpha), which makes butyrate supplementation less feasible as a treatment option (Ferrer-Picón et al., 2019). Finally, as proposed in our Vector Comparison section, the popular approach of using Escherichia coli Nissle 1917 as a chassis for therapeutic purposes raises the concern of side effects, especially with the potential production of colibactin that may be implicated in colorectal cancer (Massip et al., 2019).

Nevertheless, their efforts have inspired us to pave the way towards a novel idea. Specifically, our AND gate design is based on iGEM team UNICAMP-EMSE_Brazil 2011’s contribution of the QseBC and flhDC parts as well as iGEM team NEU_China 2019’s nitric oxide (NO) sensor parts NsrR and PyeaR. The approach of using NO as a biomarker for intestinal inflammation also provided a method of localization of our chassis to specifically target inflamed regions. Building on top of their designs, our project integrated the most recent evidence of adherent-invasive E coli (AIEC)’s involvement in exacerbating inflammation in Crohn’s Disease (Chervy et al., 2020). Not only did we integrate the ability of QseCs to sense autoinducer-3 (AI-3), the quorum sensing molecule used by E. coli (Walters & Sperandio, 2006), but we also used colicins as our main effector mechanism to directly target AIEC bacteria (Brown et al., 2015). Beyond our project, we hope that future iGEM teams will be inspired from these past projects in the creation of their novel ideas about IBD therapeutics.