What is our project about?

How is our therapeutic unique?

A plethora of scientific studies, as well as past iGEM projects, have explored various strategies to genetically modify probiotic strains in order to exert therapeutic effects in a controlled manner. Although many of the studies have produced promising results in pre-clinical models, their clinical demonstration is limited. Having surveyed current strategies, we believe that an effective approach would require a mechanism that is intrinsic to the bacteria. Colicins are a family of bacteriocins produced by certain E. coli to inhibit the growth of closely related strains. Specific colicins have been found to target a pathogenic group deemed adherent-invasive E. coli (AIEC). AIEC has been shown to be implicated in the development of IBD through biofilm formation on the lining of the intestinal wall. This is due to the pathogenic bacteria’s ability to invade the intestinal epithelia and interact with the immune cell-rich mucosa. Additionally, AIEC is able to induce inflammation and exacerbate symptoms in IBD patients by surviving and replicating intensively inside macrophages and inducing inflammatory cytokines such as TNF-α. We believe that taking advantage of the natural survival mechanism of colicin production will allow us to selectively eliminate AIEC bacteria and treat IBD.

In this project, we propose the construction of a genetic circuit that can simultaneously detect the inflammation marker nitric oxide, and a pathogen-specific quorum sensing factor named autoinducer-3. Upon activation, the genetic circuit expresses colicin E1 and E9, two bacteriocins that can selectively eliminate the AIEC. 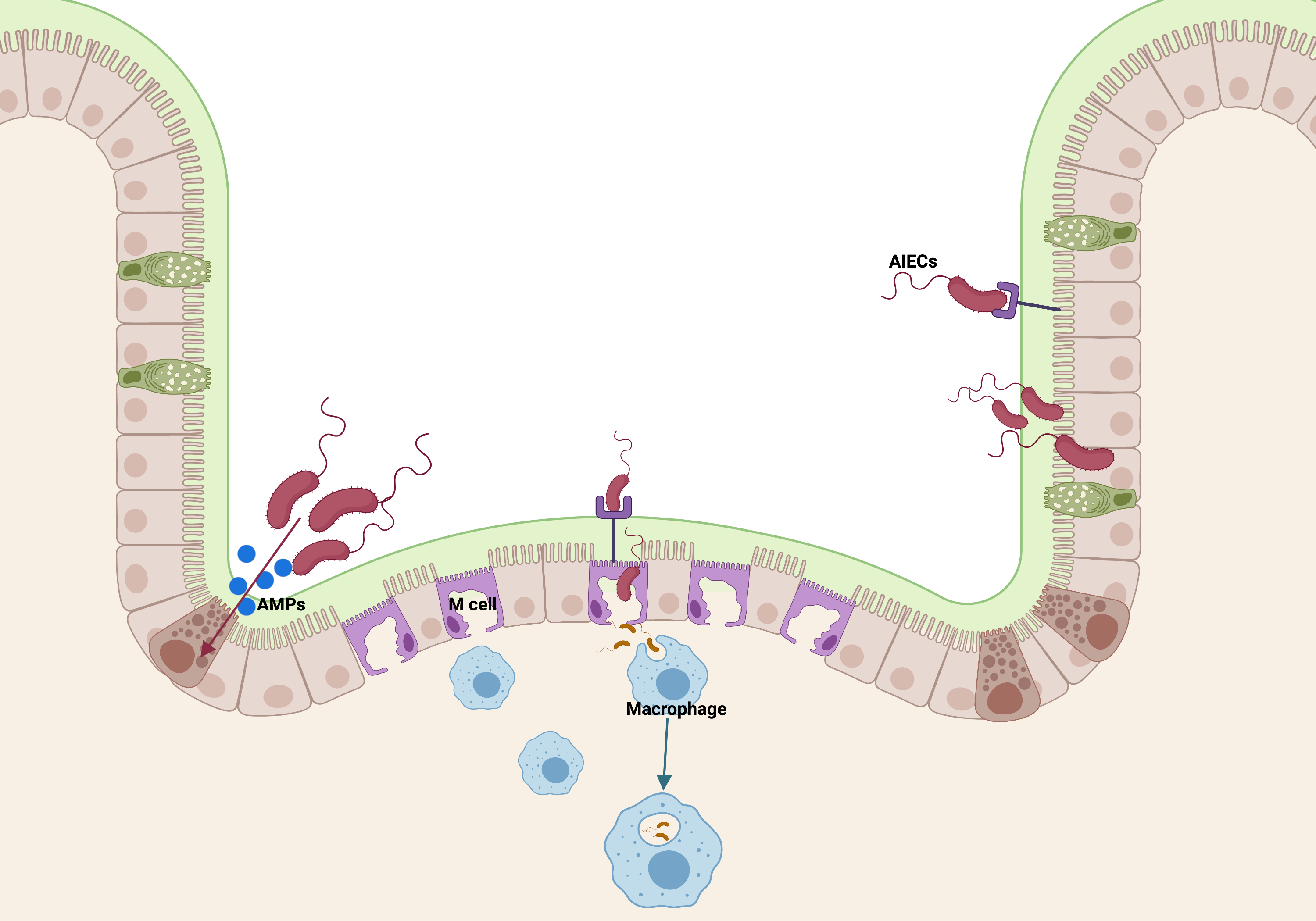 Why did we choose AI-3 as an input/marker of AIEC?

Quorum sensing (QS) is the process used by both gram-negative and gram-positive bacteria to communicate and sense population density (Miller & Bassler, 2001), (Kim et al., 2020). Specifically, it involves the concentration-dependent signalling of small molecules known as autoinducers (AI) which influence gene expression upon reaching a certain threshold (Miller & Bassler, 2001), (Kim et al., 2020), (Clarke et al., 2006). For AIEC, QS-regulated motility protein expression is one of the main drivers of bacterial virulence and colonization, which are implicated in diseases such as Crohn’s disease and bloody diarrhea (Clarke et al., 2006), (Rooks et al., 2017).

Autoinducer-3 (AI-3) AI-3 is a metabolite produced in E coli under stressful conditions whereby tdh and tRNA synthetases are used to produce substrates needed for the synthesis of AI-3. When the concentration of AI-3 produced exceeds the threshold, the metabolite can induce expression of flagella for bacterial mobility and of virulent genes for infection. The role of AI-3 in regulation of such transcription factors has been reported to play a significant role in AIEC bacteria’s ability to infect epithelial cells. As such, AI-3 is a crucial molecule for the virulence of pathogenic AIEC which colonizes the gut and contributes to the development of IBD. Hence, AI-3 will be used as a marker of IBD and input signal for the therapeutic genetic circuit.

Therefore, our genetic circuit will use AI-3 as a marker of AIEC bacterial presence in the gut. Detection of AI-3 in the gut will cause the metabolite to be bound by QseC in the cell membrane. This will activate our therapeutic which will eliminate AIEC bacterial pathogenesis on two fronts: (1) AI-3 bound QseC will activate the transcription of colicin genes which will directly eliminate AIEC bacteria and (2) binding AI-3 will also quench the signal produced by pathogenic AIEC to turn on AIEC virulent genes. Therefore, AI-3 will be used both as a marker of AIEC and quencher of the signal needed to produce virulence factors.

The E group colicins parasitize nutrient BtuB receptors, which are high-affinity receptors for vitamin B12 (James et al., 2002). They are around 60kDa (James et al., 2002) and have three functional domains: C-terminal domain for killing and cytotoxicity, R or receptor-binding domain, and N-terminal T domain for translocation into the bacterial host cytoplasm (Vankemmelbeke et al., 2005). However, the mechanisms of E1 and E9 in targeting AIEC differ. The colicin E1 R domain first binds to btuB receptors on the outer membrane, then through parasitizing the TolA pathway it would translocate through the TolC channel-tunnel in a mostly unfolded state (Masi et al., 2007). Then the C-domain, a decahelical channel forming domain, would tightly embed into the inner membrane forming a voltage-gated ion channel that results in depolarization of the bacterial inner membrane that kills the cell (Gouaux, 1997; Masi et al., 2007). Meanwhile, E9 is an enzymatic protein with a C-terminal domain that is an H-N-H endonuclease that nicks double-stranded DNA, as well as single stranded DNA and RNA (Pommer et al., 2001). Similar to E1, E9 translocation through the outer membrane is dependent on R domain interaction with Tol receptors in the periplasmic space, the space between the outer and inner membrane (James et al., 2002). Unlike E1, the entire enzymatic domain must cross the inner membrane into the cytoplasm. Although the mechanism is not well-understood, recent studies have indicated that the E9 DNase domain itself may be responsible for forming conducting channels in the planar lipid bilayers (Mosbahi et al., 2004). Once inside the cytoplasm, E9 DNase cleaves bacterial chromosomal DNA, resulting in cell-death. Its cytotoxic activity is dependent on the presence of metal cations (Pommer et al., 2001; D. C. Walker, 2002), pH (James et al., 2002), as well as net positive charge on E9 DNase domain (D. Walker et al., 2007). Importantly, the cleavage of supercoiled double stranded DNA depends on the presence of Mg2+ and E9 DNase preferentially cleaves thymine bases, while cleavage of ssDNA is optimal in presence of Ni2+, indicating that the mechanism of cleavage differs depending on the metal cation present (Pommer et al., 2001; D. C. Walker, 2002). The specific mechanisms are not well understood, but studies have indicated it is similar to i-Ppol, Serratia nuclease50, and caspase-activated DNase (D. C. Walker, 2002).

Current research on E1 indicates that it poses relatively little cytotoxicity. For example, E1 reduced cell viability in Vero monkey kidney cells no more than 30% compared to the control (Murinda et al., 2003), and high concentrations above 105-106 lethal units were needed to have significant cytotoxic effects on Chinese hamster lung fibroblast line V79 (Šmarda & Keprtová, 1987). Furthermore, E1 can be used as a safe food preservative (Patton et al., 2007) and dietary supplementation with E1 has improved growth of weaning pigs (Cutler et al., 2007). However, specific research on E9’s effect on animal cells were not found, so its cytotoxicity would need to be tested in this project.