The main measurement in our project are preparation of GNPs-aptamer and preparation of test probe &control probe. They are one of the most important parts in our test paper that used for detecting C4-HSL molecule.

GNPs-aptamer is used for detecting the C4-HSL molecule, we explored an approach to let gold nanoparticles(GNPs) successfully conjugate with aptamer, which included these processes.

2.Conjugation of GNP and aptamer1 ml GNP solution was mixed with 0.2 M potassium carbonate in order to change its PH value to 8.5. ·Centrifuging this solution in 10000rpm for 10 minutes, then removing 800μL supernatant. ·Shaking the GNP solution for 2 minutes. ·4μL Activated aptamer was added to the centrifuge tube that contains GNP, the final concentration of aptamer in the solution is 1 μmol/L. ·Shaking the centrifuge tube for 12h in dark environment, room temperature.

1.Preparation of the test probe ·Mixing 35μL of 10μM DNA probe 1 with 35μL of 1mg/mL streptavidin ·Placing the solution in 4℃ for 2h ·30μL PBS buffer was added to this solution

2.Preparation of control probe ·Mixing 35μL of 10μM DNA probe 2 with 35μL of 1mg/mL streptavidin ·Placing the solution in 4℃ for 2h ·30μL PBS buffer was added to this solution

1.Since aptamer can protect GNP after conjugating with it, when 17.5μL NaCl was added gradually, the GNPs-aptamer solution it can still have red colour. (As shown in figure1,2,3,4,5,6,7,8) 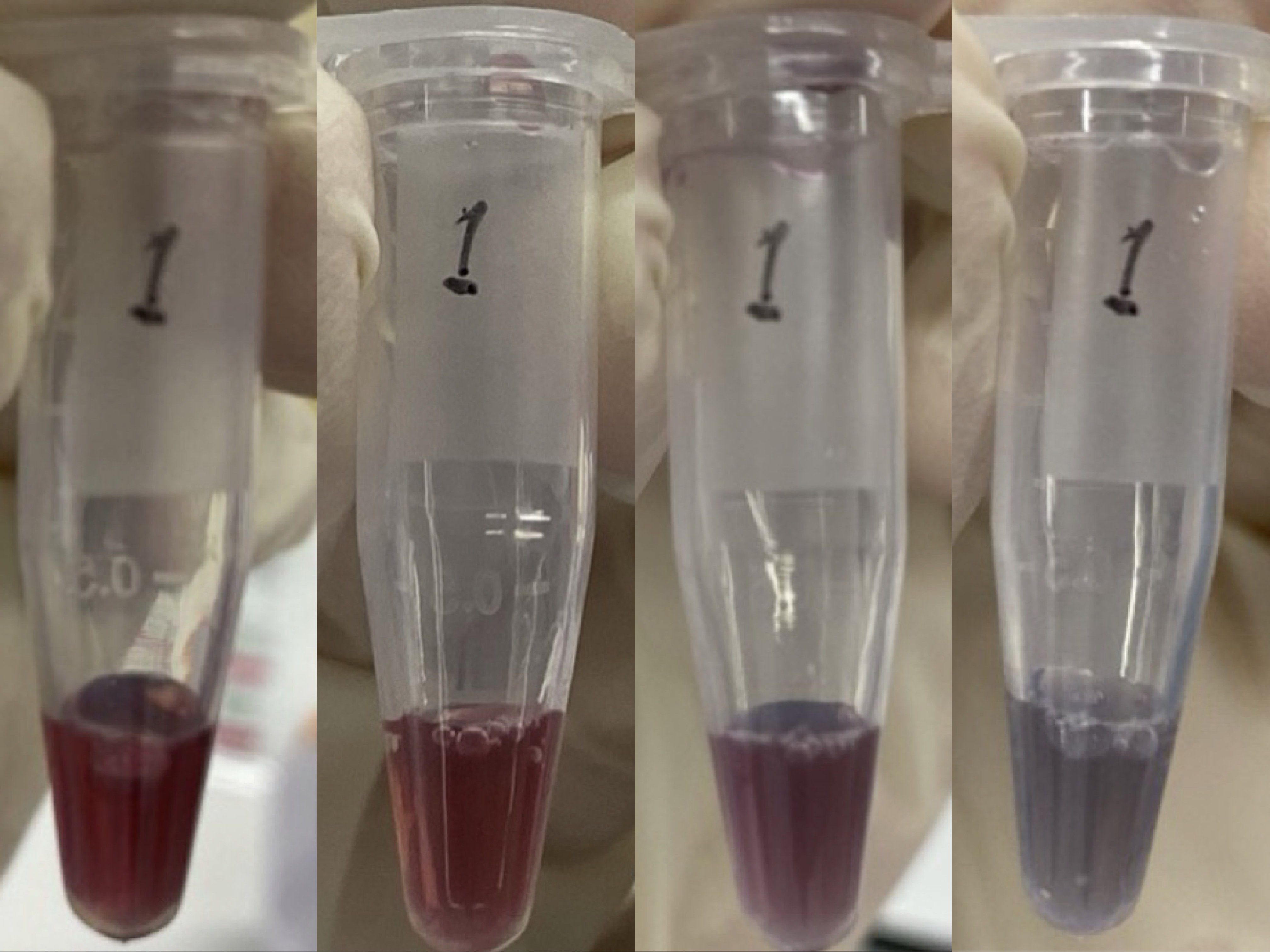 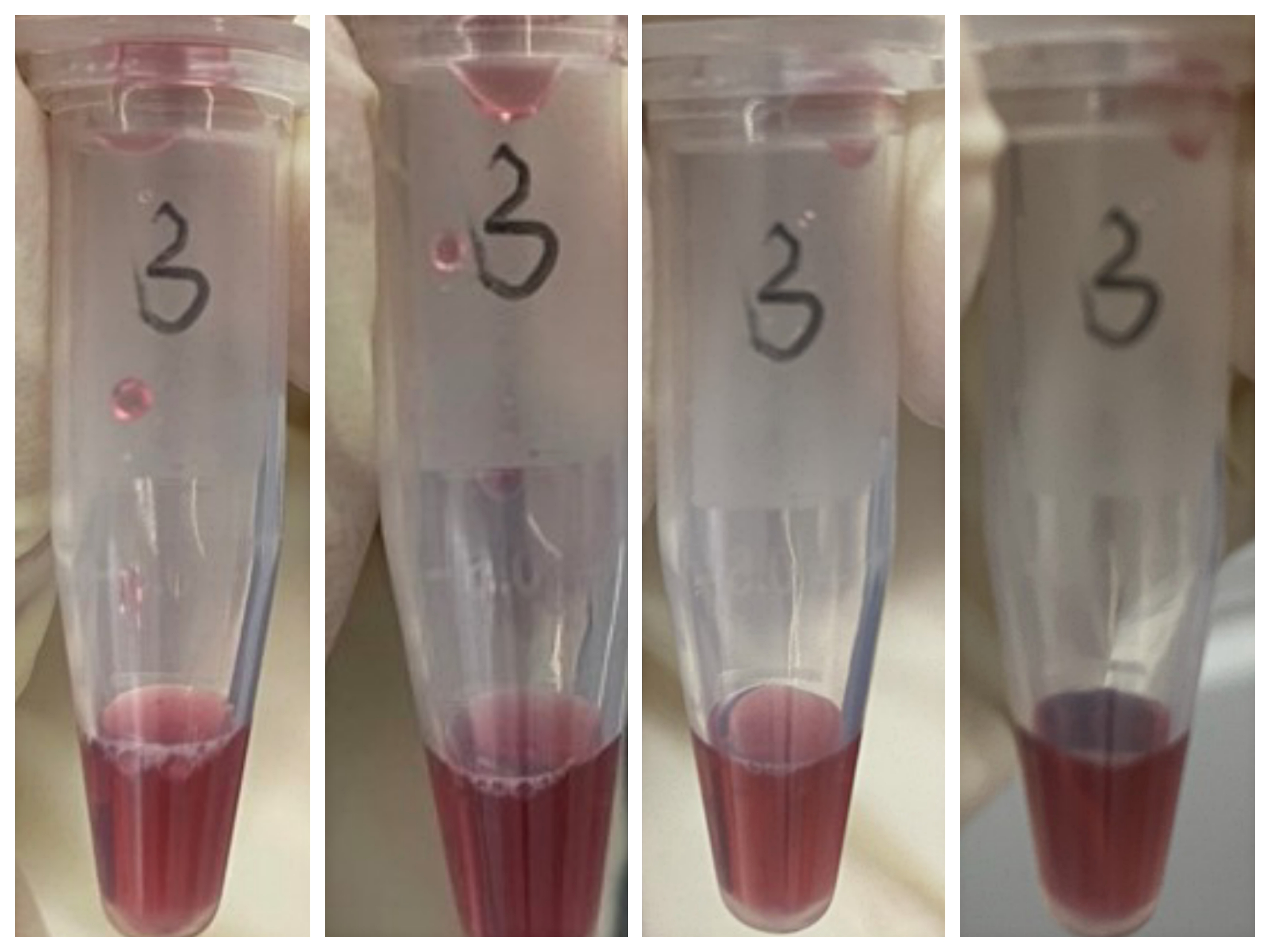 2.After sample was added to the sample pad, GNPs-aptamer can cnojugate with DNA probe in control line and show red colour.
(As shown in figure 3)

(Since we added water to the sample pad, GNPs-aptamer could accumulate in control line and test line and show red colour)

We used the SYBR Green Ⅰ（SG）fluorescence method to test the function of aptamers. The principle of this method is SG acts as a DNA fluorescent dye that does not carry a fluorescent signal of its own (Abraham et al., 2018). When bound to the aptamer, it fluoresces because it is embedded in the secondary structure of the DNA. Thus when aptamer is bound to the SG dye, green fluorescence is produced when stimulated by excitation light（with the excitation Wavelength 485 nm and emission wavelength 535 nm). However, when the target small molecule is added to the system, the specific binding of the small molecule to the aptamer results in competition with the SG for the binding site, and as a result, the fluorescence value of the system decreases.

In our project, the protocol we used for the method was as follows (using C4-HSL as example): 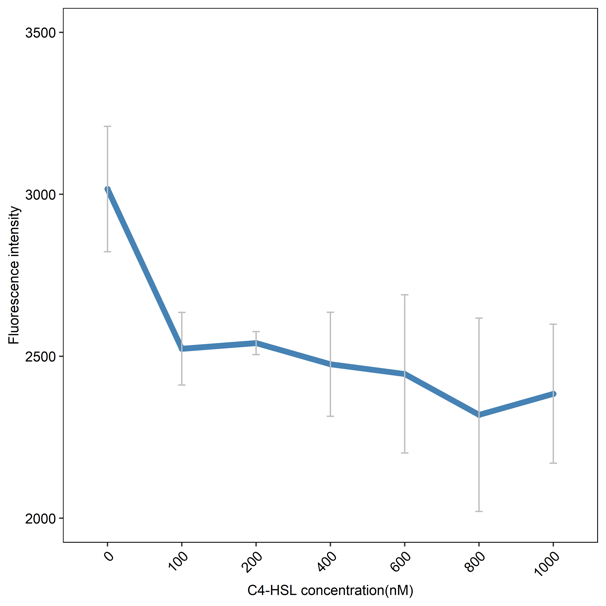