As a proof of concept of our targeted directed evolution system, Evolution.T7, we evolved the ampicillin resistance gene, AmpR, in a way that it would confer resistance against aztreonam, which is a powerful antibiotic against ampicillin resistant bacteria [1,2]. We discuss more about this choice in the human practices part.

AmpR is an E. coli gene coding for a β-lactamase enzyme. It is a derivative of the TEM-1 β-lactamase (Uniprot P62593) with two mutations V82I and V182A. This protein is associated with the resistance mechanism against the large family of β-lactams, antibiotics which include the well known penicillin and ampicillin.

β-Lactamases act by hydrolysing the β-lactam ring (Figure 1), thus inactivating the antibiotic. Fortunately, among all the subgroups of β-lactams (Table 1), some have less affinity with the β-lactamase(s) and overcome this resistance. For example, in monobactams, aztreonam is known to have a bactericidal effect even on bacteria carrying the AmpR gene [3]. We confirmed this experimentally by testing the resistance of the bacteria carrying AmpR to different β-lactam antibiotics (Figure 2).

Figure 1. The mode of action of β-lactamases: hydrolysis of the β-lactam ring.

Table 1. β-lactam groups and sub-groups, classified based on their core ring structures. 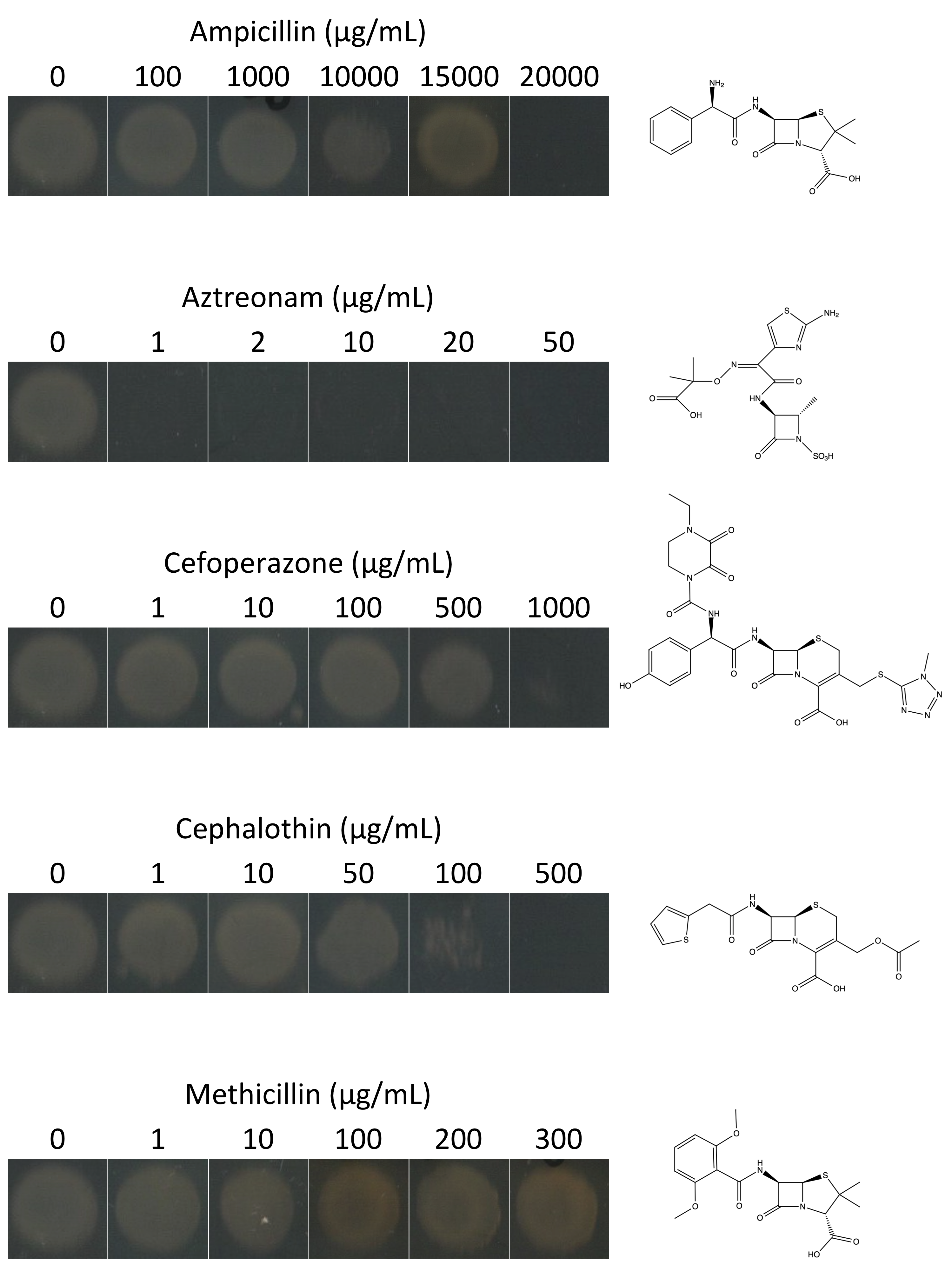 For AmpR evolution, we decided to use E. coli MG1655 cells harboring two mutations Δung and Δnfi that were shown to be important for enhancing the mutation rate of the mutagenic system [4]. ung is a gene encoding the uracil DNA N-glycosilase that is involved in the elimination of uracil from DNA molecules [5], while nif is a gene encoding the endonuclease V of E. coli which eliminates inosines [6,7]. Uracil and inosine are nucleobases produced by the action of cytosine and adenine deaminases, respectively, which are the mutator domains of our Evolution.T7 system. 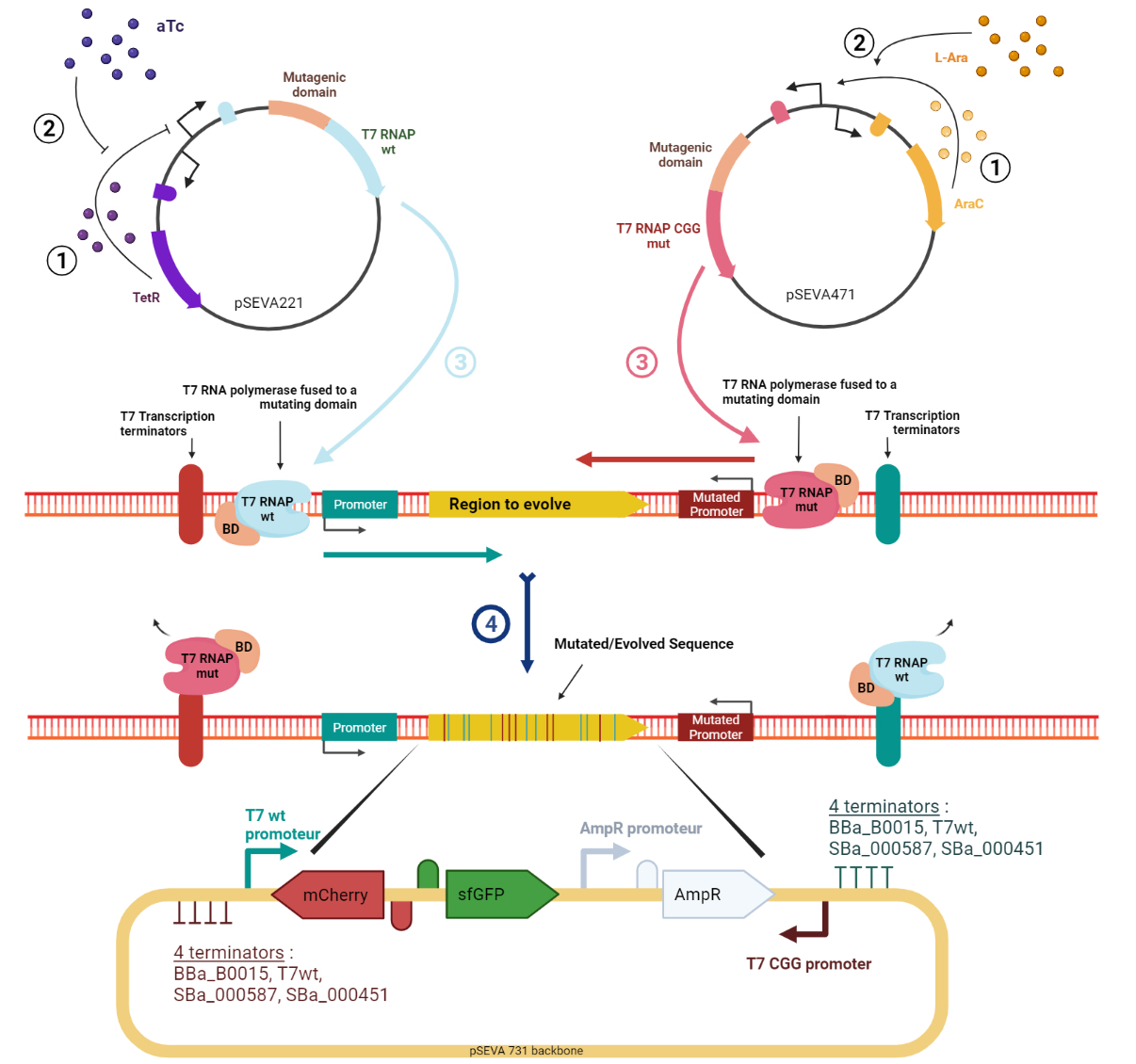 Transformed bacteria were first grown overnight in 96-deep-well plates containing 1 mL of LB medium supplemented with the relevant antibiotics (5 µg/mL trimethoprim, 12.5 µg/mL kanamycin and 12.5 µg/mL spectinomycin), then diluted by 40x into similar media. Upon reaching early log-phase, cells were further diluted 20x in 100 µL of LB medium supplemented with the antibiotics (5 µg/mL trimethoprim, 12.5 µg/mL kanamycin, 12.5 µg/mL spectinomycin), and inducers (200 ng/mL anhydrotetracycline and 1.5 mM L-arabinose) in a 96-well microplate. The plate was incubated at 37 °C at 200 rpm and 5 µL of cell suspensions were spotted, 1, 3 and 24 hours later, onto LB agar plate containing increasing concentrations of aztreonam. 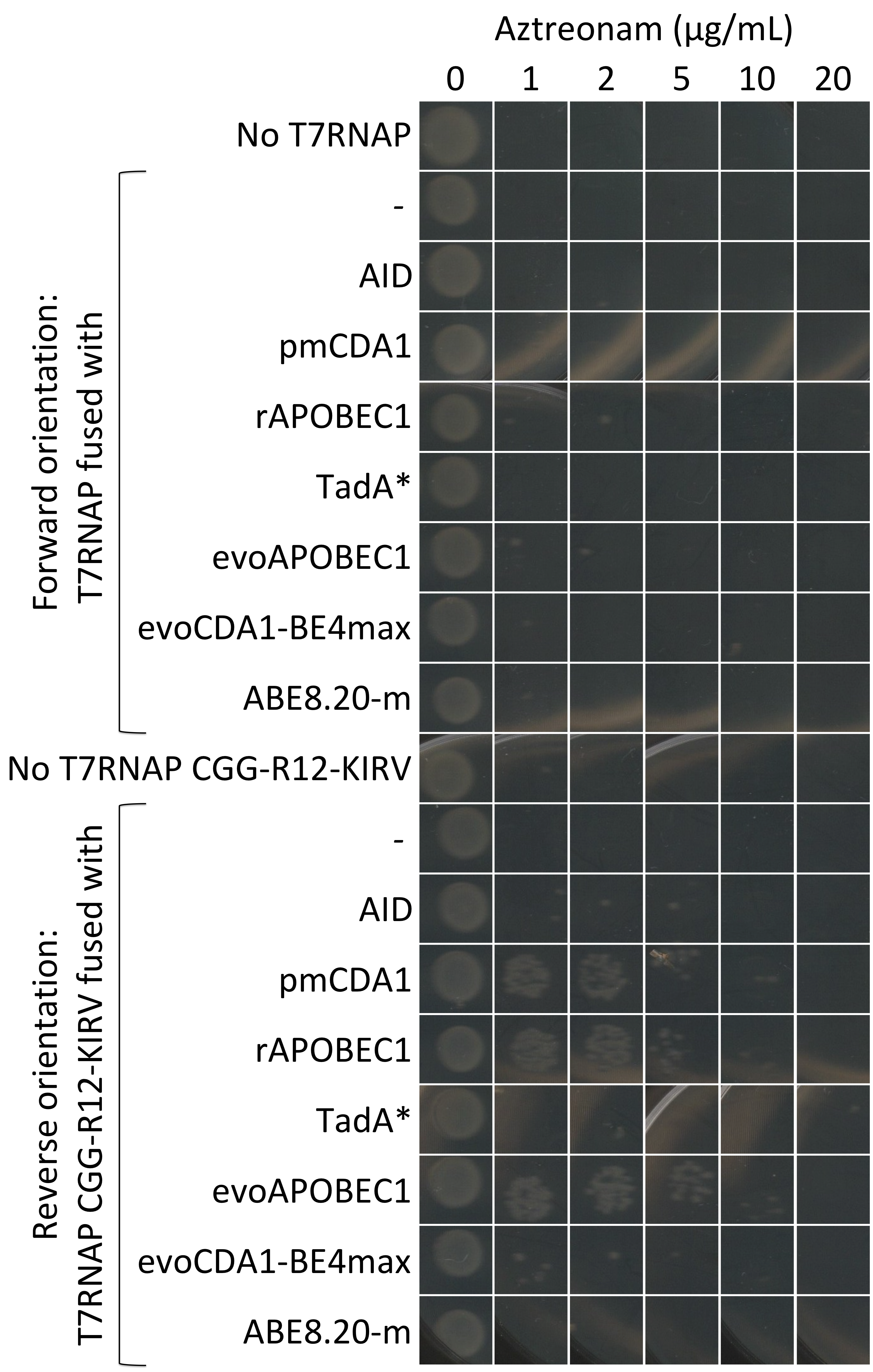 Figure 4. Pictures of E. coli cells resistant to 0, 1, 2, 5, 10 or 20 µg/mL aztreonam, 24 h after induction of the Evolution.T7 system. Cells were carrying the reporter plasmid (BBa_K3766111) and only either the forward or the reverse mutator. T7RNAP is the natural T7 RNA polymerase that transcribes from the T7wt promoter. T7RNAP-CGG-R12-KIRV is a mutated T7 RNA polymerase version that transcribes from the mutant T7CGG promoter. 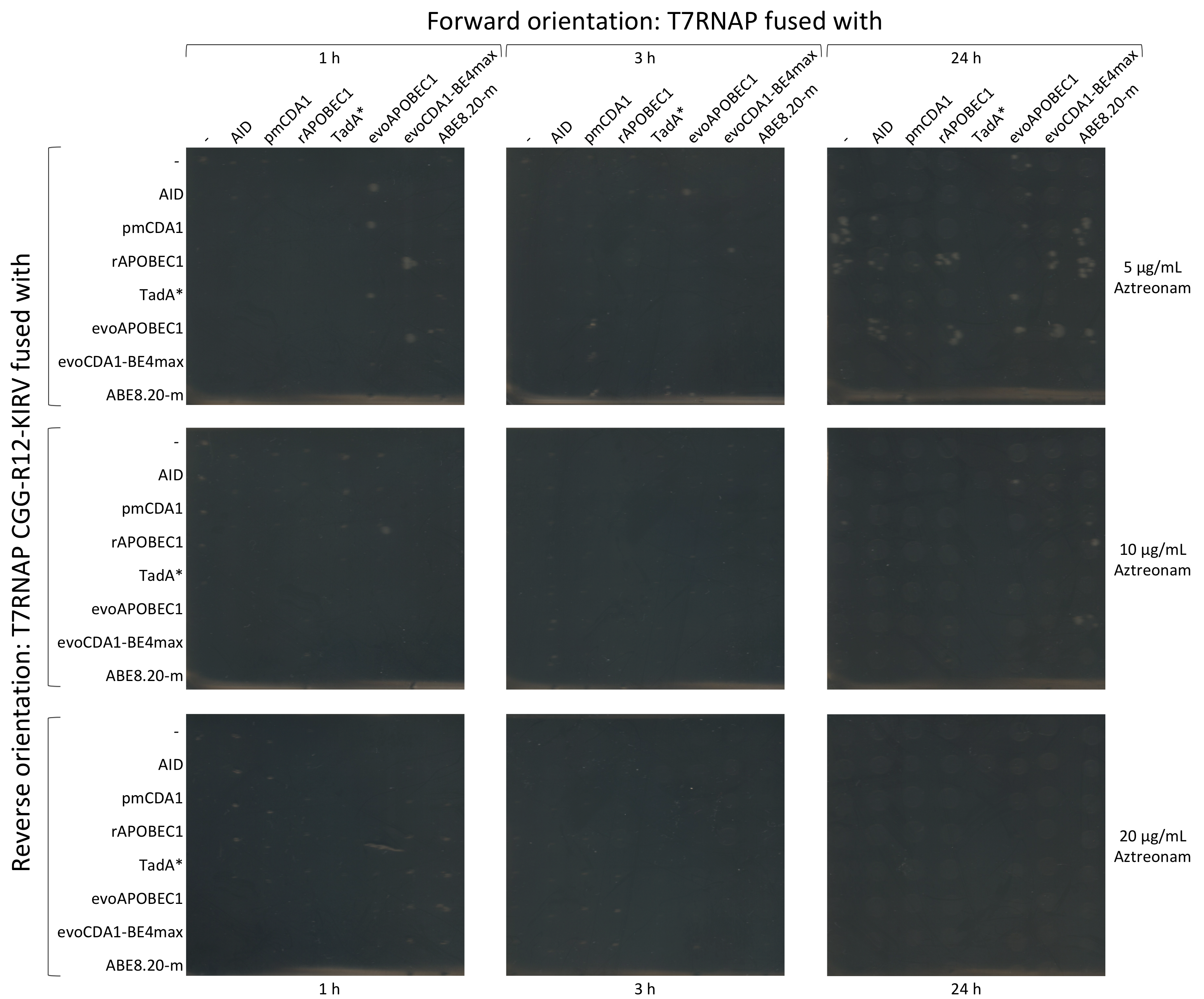 Figure 5. Pictures of E. coli cells resistant to 5, 10 or 20 µg/mL aztreonam, 1h, 3h and 24h after induction of the Evolution.T7 system. Cells were carrying the reporter plasmid (BBa_K3766111) and both forward and reverse mutators.

A total of 33 colonies were isolated on 10 µg/mL aztreonam plates and only 4 on 20 µg/mL aztreonam plates. As can be observed in Figures 4 and 5, and summarized in Figure 6, not all mutator domains were able to produce such mutants. We can hypothesize that some combinations are better than others but with the selection of aztreonam and the few repetitions, this experiment does not allow us to do so. We choose to answer this question in our modeling part to save lab time.

Figure 6. Number of aztreonam resistant colonies isolated on 10 and 20 µg/mL aztreonam plates as a function of different combinations of mutator domains of our Evolution.T7 system.

To further understand the impact of each mutation on aztreonam resistance, the IC50 values were estimated. For this, E. coli NEB5ɑ cells were first transformed with AZT-1 to AZT-35 containing plasmids (in pSEVA73 backbone), then grown overnight in 96-deep-well plates containing 1 mL of LB medium supplemented with 10 µg/mL trimethoprim, then diluted by 40x into similar media. Upon reaching early log-phase, cells were further diluted 20x in 100 µL of LB medium supplemented with increasing concentrations of aztreonam (0 to 50 µg/mL or 250 µg/mL) in a transparent 96-well polystyrene microplate (Sarstedt). The plate was incubated at 37 °C at 200 rpm and OD600nm was measured every 10 min for 24 hours in a CLARIOstar (BMGLabtech) or Infinite 500 (Tecan) plate reader. The OD600nm values at the time-point when the cultures performed in the absence of aztreonam reached the stationary phase were plotted as a function of the antibiotic concentration. These dose-response curves were fitted using the AAT Bioquest, Inc., Quest Graph™ IC50 Calculator to the sigmoidal equation

where OD600nmmin represents the minimal OD600nm, OD600nmmax represents the maximal OD600nm, C is the concentration of the antibiotic, IC50 is the antibiotic concentration that inhibits 50% of the bacterial growth, Hill coefficient is describing the steepness of the curve. The OD600nm values were converted into equivalent particles using the calibration curves presented on the "Measurement" page of this wiki. Similarly, IC50 values for aztreonam were estimated for the chassis cells, E. coli NEB5ɑ with or without the parental AmpR (BBa_K3766012). In this case, the aztreonam range was lower (0.005 to 10 µg/mL).

Sequence analysis of all selected AmpR variants revealed the presence of at least one and up to 10 mutations in comparison with the original AmpR sequence (Figure 6 and Table 2). All mutations were transition (no transversions observed), confirming that they were generated by the Evolution.T7 system and did not appear randomly.

Taking into consideration that the deamination occurs mostly on the non template strand, the expected results for the action of different mutators are:

We can observe that the majority of mutants were obtained with cytosine deaminases on the reverse strand and they contain G -> A transitions. We can also notice that adenine deaminase seems to be less active than the cytosine one.

Figure 6. Summary of variations in the sequences of AmpR variants evolved to confer resistance to aztreonam (AZT-1 to AZT-35) in comparison with the original AmpR sequence (BBa_K3766012). The mutants are presented in the same order as in Figure 7.


Table 2. Summary of variations in the sequences of AmpR variants evolved to confer resistance to aztreonam (AZT-1 to AZT-35) in comparison with the original AmpR sequence (BBa_K3766012).

Phylogenetic analysis allowed inferring the evolution of AZT variants (Figure 7) using the AmpR as the ancestral sequence. Although all AZT variants are very similar, we can observe 3 clades, each representing the sequences having one type of amino acid at a particular position: Arg162 encoded by CGT in AmpR and in the upper calde and that was mutated to either CAT (encoding a His) or to TGT (encoding a Cys). 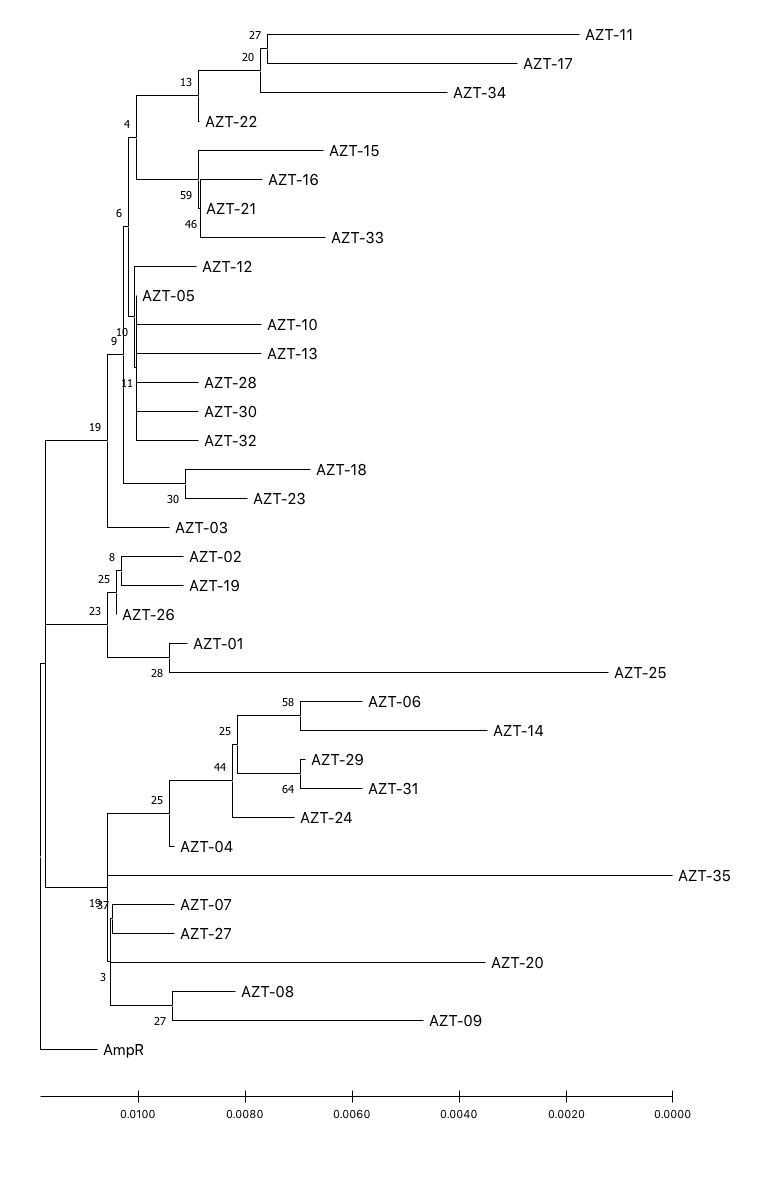 Figure 7. Evolutionary analysis by Maximum Likelihood method. The evolutionary history was inferred by using the Maximum Likelihood method and Tamura-Nei model [9]. The tree with the highest log likelihood (-1780.57) is shown. The percentage of trees in which the associated taxa clustered together is shown next to the branches. Initial tree(s) for the heuristic search were obtained automatically by applying Neighbor-Join and BioNJ algorithms to a matrix of pairwise distances estimated using the Tamura-Nei model, and then selecting the topology with superior log likelihood value. The tree is drawn to scale, with branch lengths measured in the number of substitutions per site. This analysis involved 36 nucleotide sequences. Codon positions included were 1st+2nd+3rd+Noncoding. There were a total of 861 positions in the final dataset. Evolutionary analyses were conducted in MEGA X [10].

After the mutations were generated at DNA level with our Evolution.T7, the selection was performed based on the function of the protein: hydrolyse aztreonam thus conferring E. coli resistance to it. As β-lactamases are well studied proteins, some mutations were already described in the literature mainly in clinical isolates, but their impact on the aztreonam resistance are generally not fully quantified. Table 3 reports mutations identified and highlights those obtained in more than two AZT variants, those that were already reported in the literature (in green) and others that seem to be specific to aztreonam resistance.

Table 3. Summary of variations in the protein sequences of AmpR variants evolved to confer resistance to aztreonam (AZT-1 to AZT-35) in comparison with the original AmpR sequence (BBa_K3766012). In green the mutations already documented in literature [3], in blue mutations that were seen two or more times, in black mutations that were only seen once.

Table 3 reports also the IC50 values for aztreonam of various mutants, that were all significantly higher than those determined for the chassis strain E. coli NEB5ɑ with or without the AmpR gene (Figures 8). 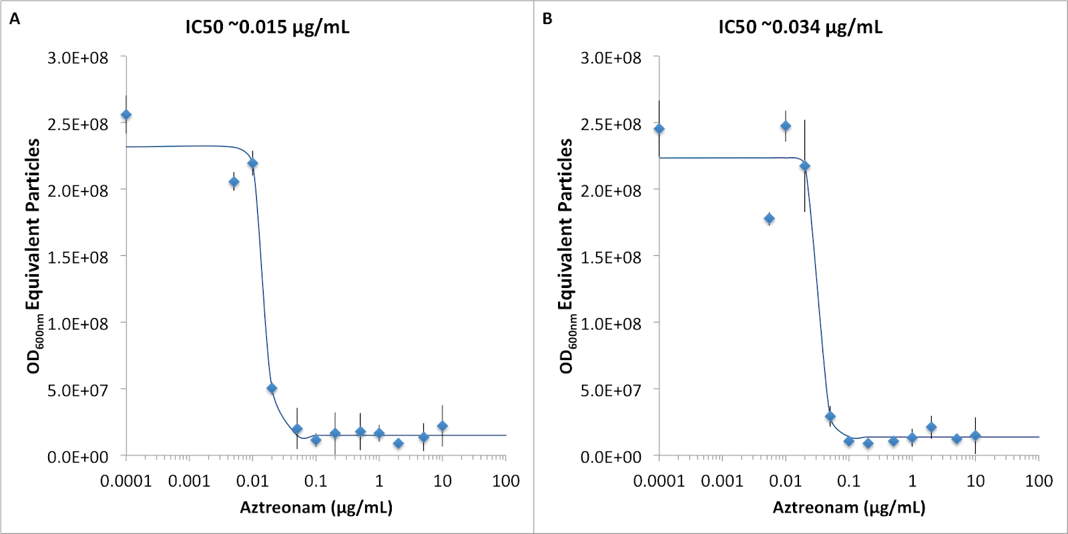 Interpretation may be difficult due to cross-mutations but we can already make some conclusions.

First we can quantify the impact of two known mutations (R162H and G326S) on the aztreonam resistance: both raise the IC50 of the cells from 0.034 µg/mL to more than 5 µg/mL aztreonam. 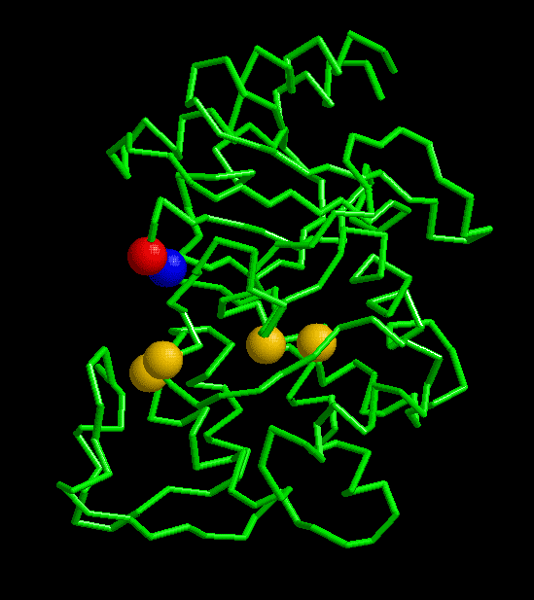 Figure 9. Structure of the β-lactamase protein (PDB 1AXB) with mutations G236S and E237K indicated in red and blue respectively. Amino acids forming the active site are in yellow.

Next, we can put in light some new mutations than seems to have a great impact on the aztreonam resistance but have been never seen before: 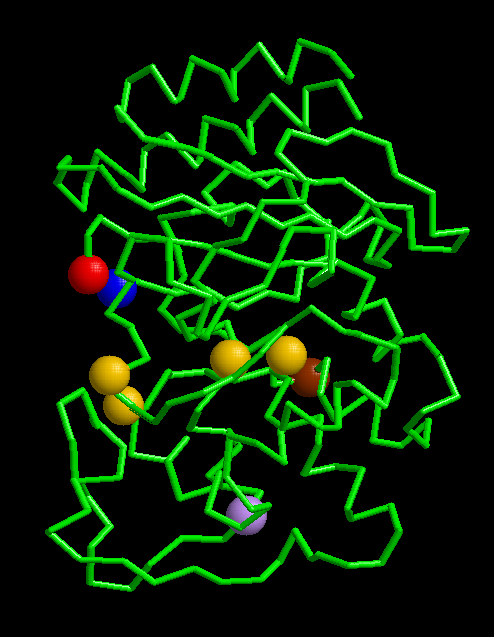 Figure 10. Structure of the β-lactamase protein (PDB 1AXB) with mutations G236S and E237K indicated in red and blue respectively and mutations V117I and D207N indicated in purple and brown respectively. Amino acids forming the active site are in yellow. 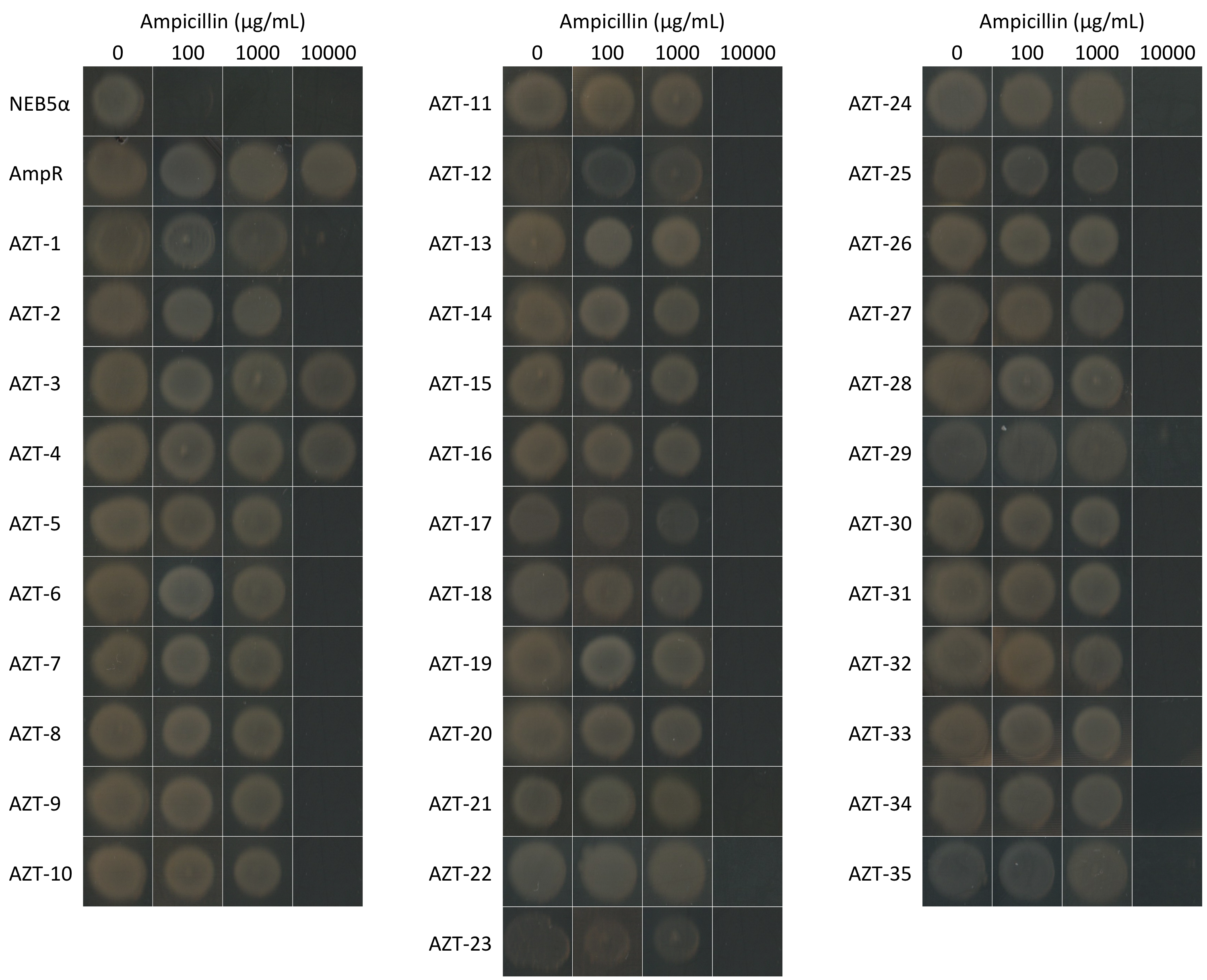 [2] Ramsey C, MacGowan AP. A review of the pharmacokinetics and pharmacodynamics of aztreonam. The Journal of Antimicrobial Chemotherapy (2016) 71: 2704–2712.

[9] Tamura K, Nei M. Estimation of the number of nucleotide substitutions in the control region of mitochondrial DNA in humans and chimpanzees. Molecular Biology and Evolution (1993) 10: 512–526.