Working with other Teams

The goal of the collaboration is to educate people about synthetic biology, share experiments and create strong links under the iGEM family! At Evry Paris-Saclay iGEM Team 2021, we were well aware of this challenge.

The Fête de la Science of Paris (the Science Festival) is an event that aims to highlight a multitude of scientific content for the general public, free of charge, throughout the French-speaking world.

On this occasion and for its 30th edition, the Cité des Sciences of Paris has hosted and organized fun activities and experiments throughout the weekend of 2nd to 3rd October. Under its full name, La Cité des sciences et de l'industrie (The House of Science and Industry), located at the Porte de la Villette in Paris, aims to promote, enhance and disseminate scientific culture to a wide audience. This institution regularly organizes scientific exhibitions and conferences on various themes (digital, health, professions, etc.). 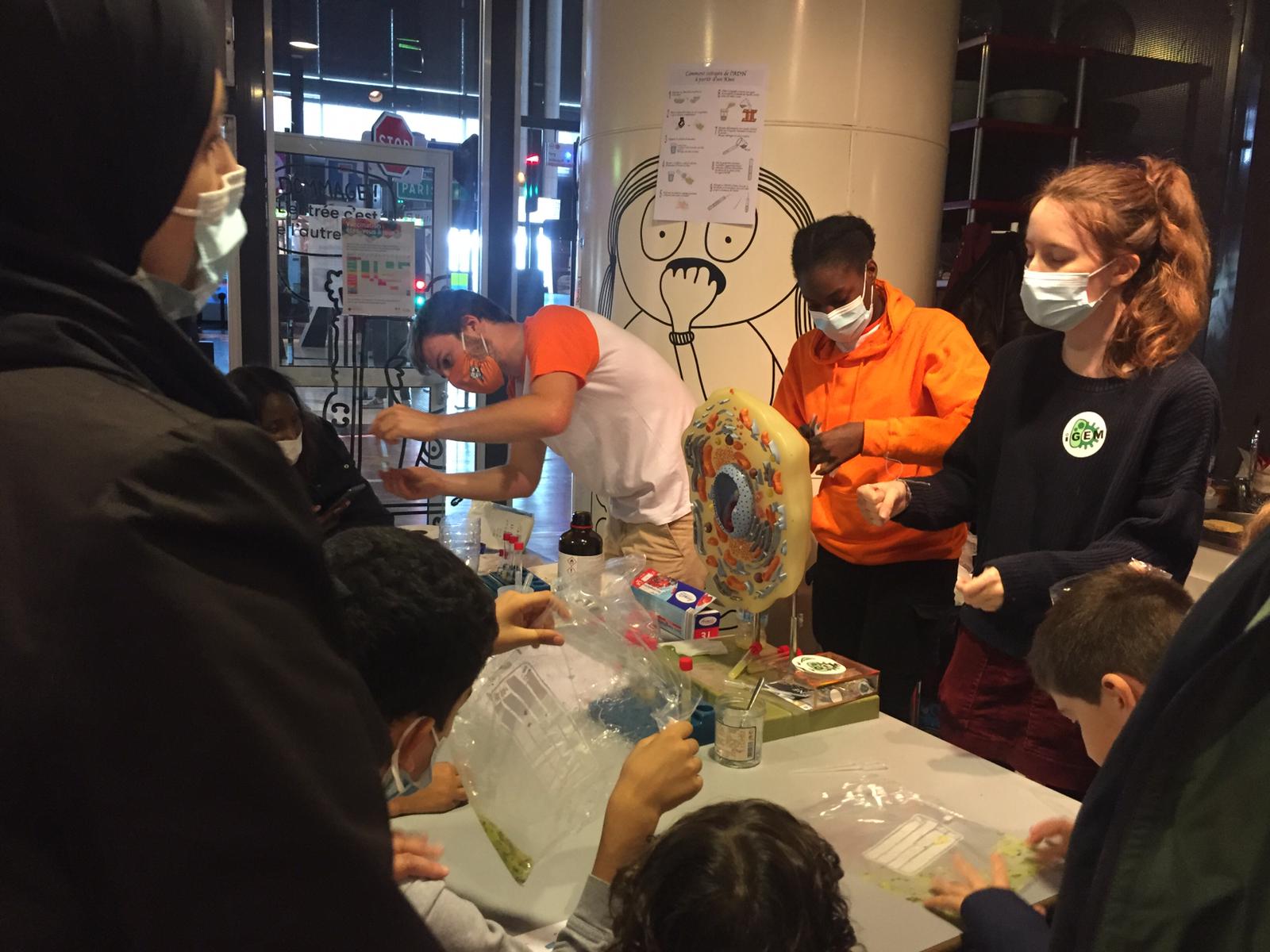 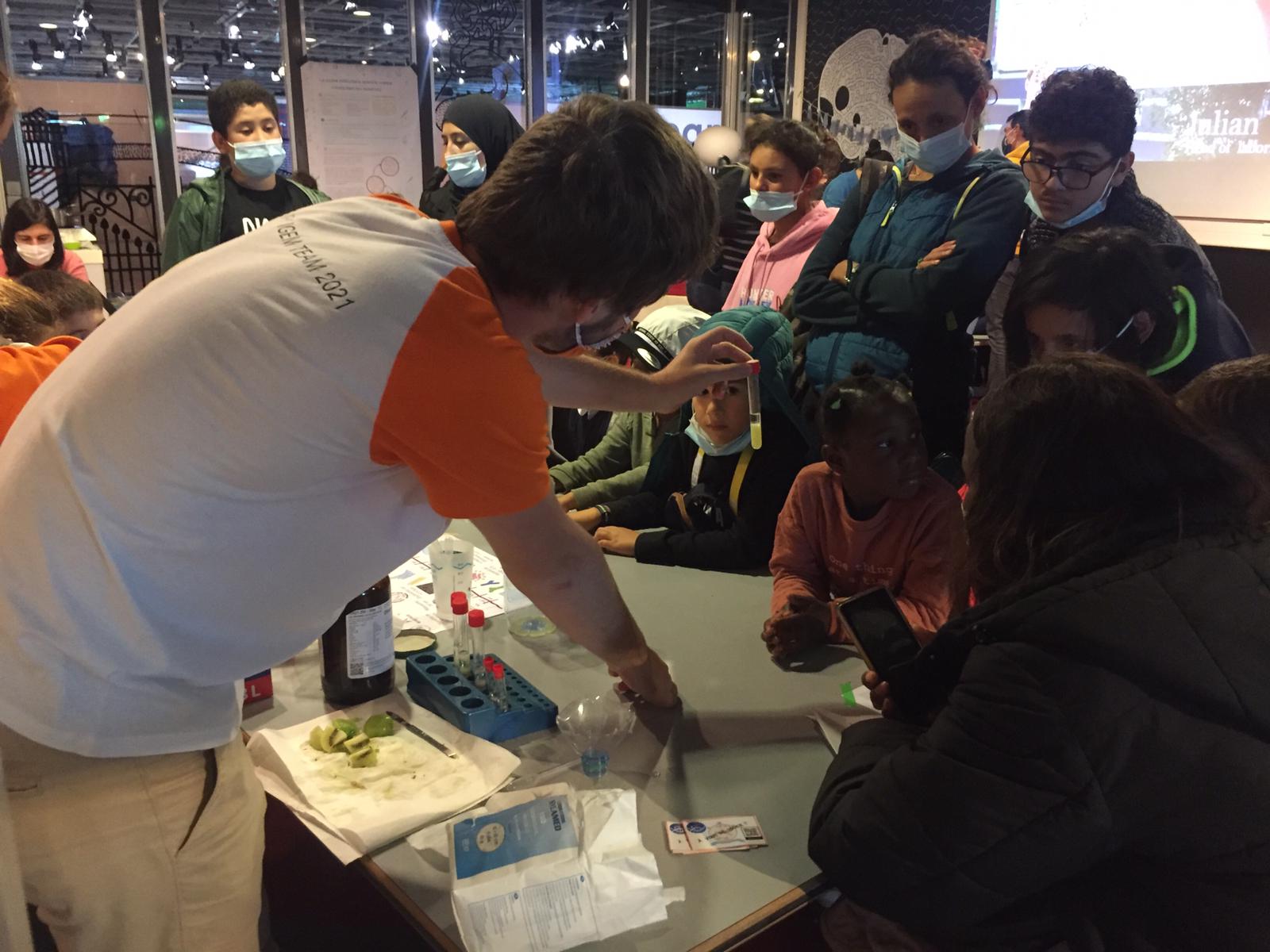 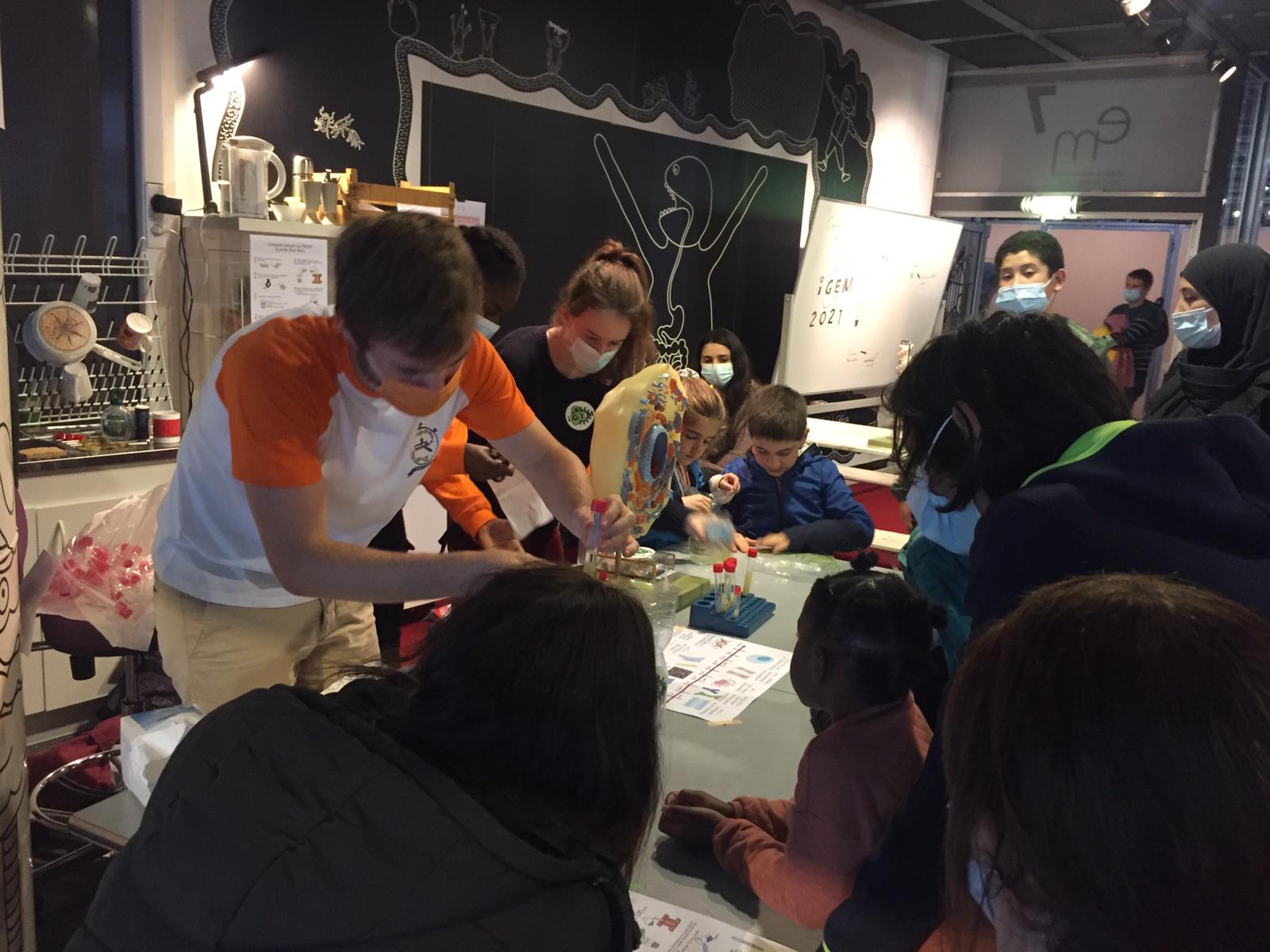 For the 2021 Science Festival weekend, workshops, animations, and demonstrations on fauna and flora, the ocean, and bacteria were organized and more than 15,000 people were expected to attend each day. Our team had the opportunity to participate in this event with 4 other Parisian teams (GO_Paris-Saclay, Ionis_Paris, Paris_Bettencourt, and Sorbonne_U_Paris).

Together, we animated a funny and entertaining stand of scientific mediation around the theme “DNA”. The public, mainly families, had the opportunity to learn more about the genetic information we all carry. Through simple experiments, such as the extraction of DNA from a kiwi, we took the opportunity to illustrate and make the audience understand the location of DNA and the protective layers that make up cells. The manipulations were accessible thanks to the use of common reagents found in every kitchen (such as salt and washing-up liquid). 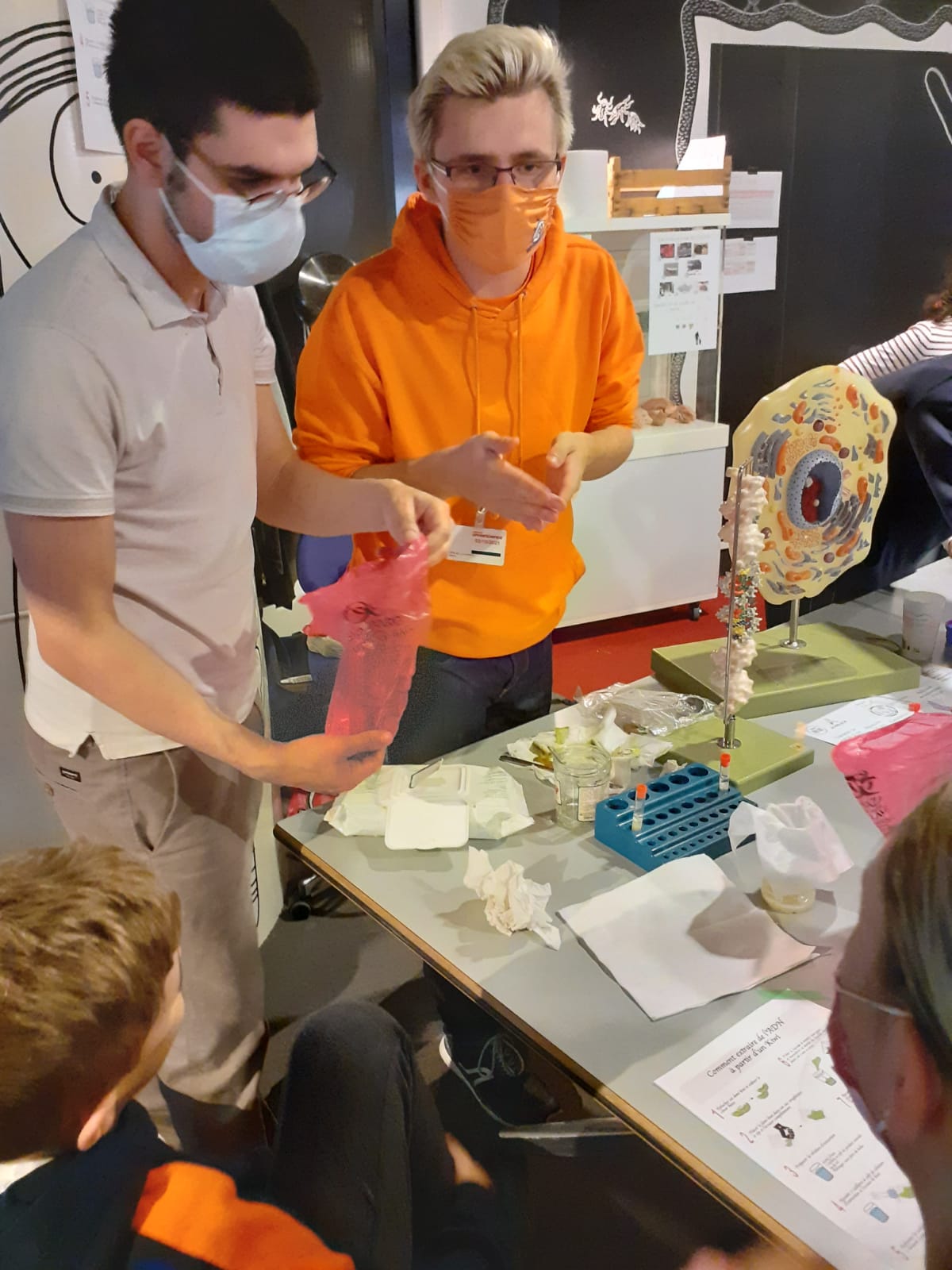 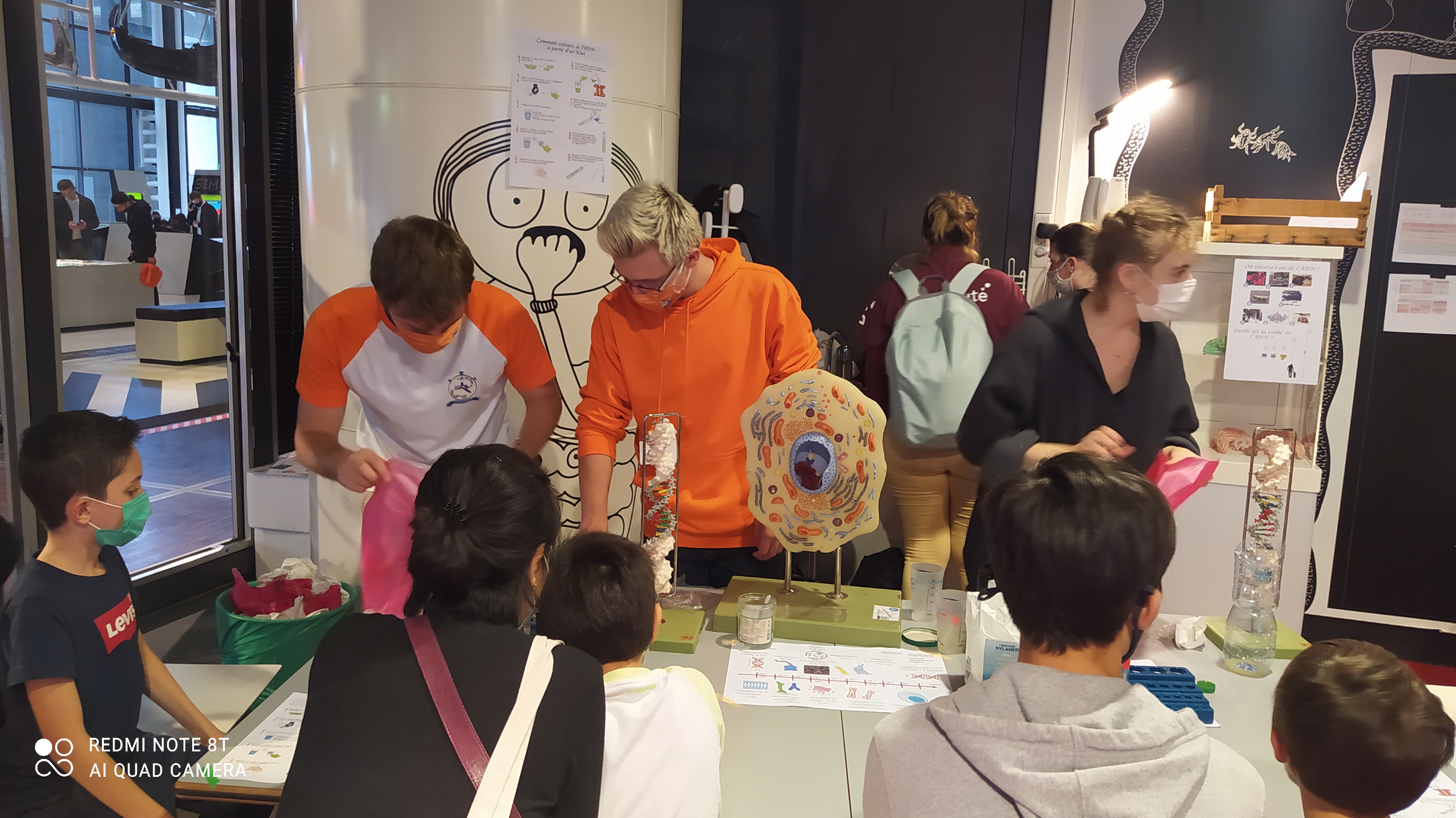 We also gave several lectures to explain our iGEM project in a clear and accessible way. We described how we came up with the idea of this project, the problems it addresses, and the solution we wish to provide.

We would like to give a special thanks to the iGEM GO_Paris-Saclay team who made possible this collaboration with the Cité des sciences, and to the Ionis_Paris, Paris_Bettencourt, and Sorbonne_U_Paris teams for making this day unforgettable.

We also honored the tradition of the Parisian meet-up which began in 2014. But for this year, the Parisian meet-up has evolved into a French meet-up, giving way to 9 French-speaking teams in total (GO Paris-Saclay; Ionis-Paris; Paris-Bettencourt; Sorbonne-U-Paris; Lausanne; Aix Marseille; INSA-UPS, Nantes, and us). Although the invited teams were French-speaking, European teams were also welcome to attend since this event took place online. During this meet-up, conferences, discussions, and games organized by each Parisian team punctuated the day and it was a success despite the distance. Every team was able to actively participate throughout the day. All of this was possible after several months of organization, meetings, exchanges, and anticipation! 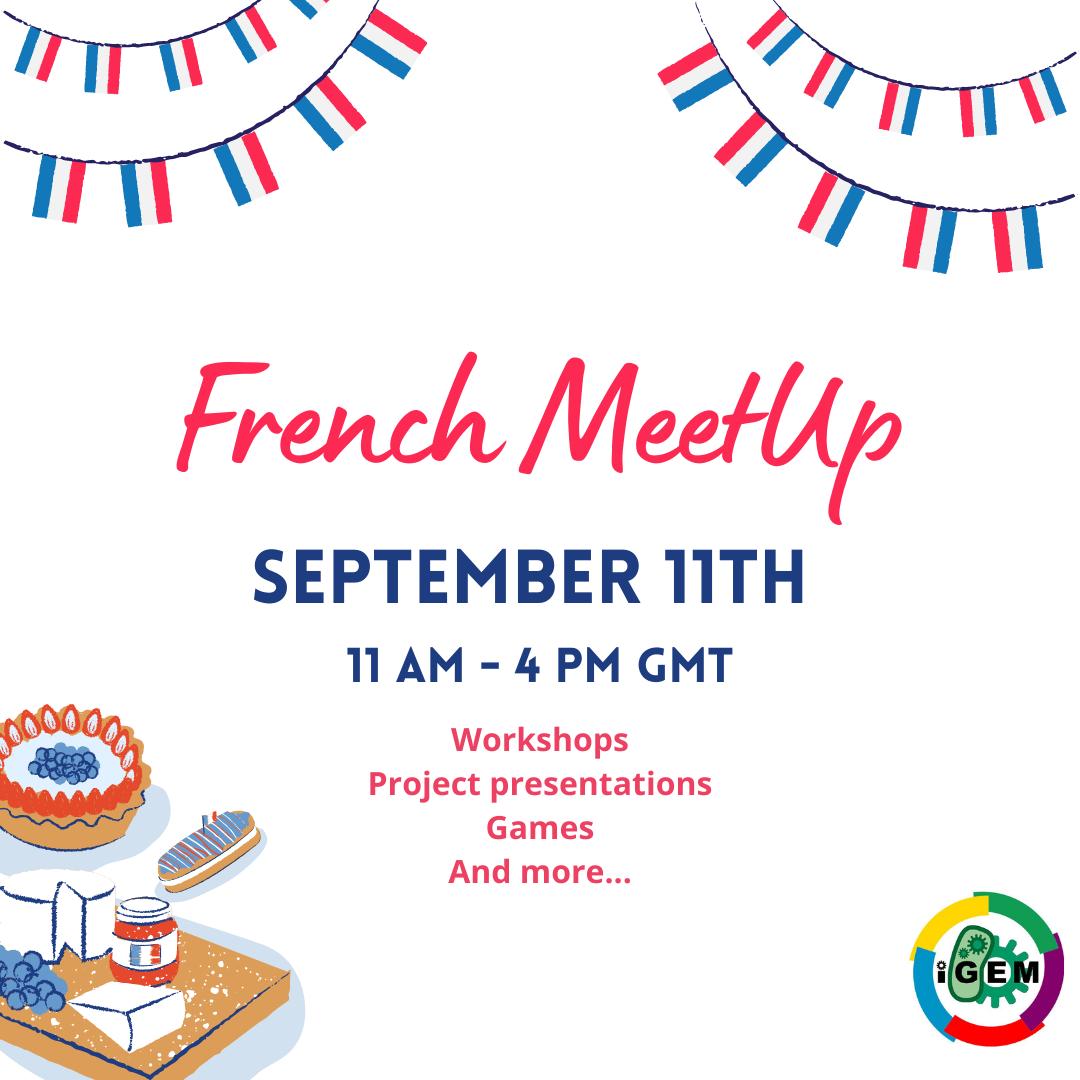 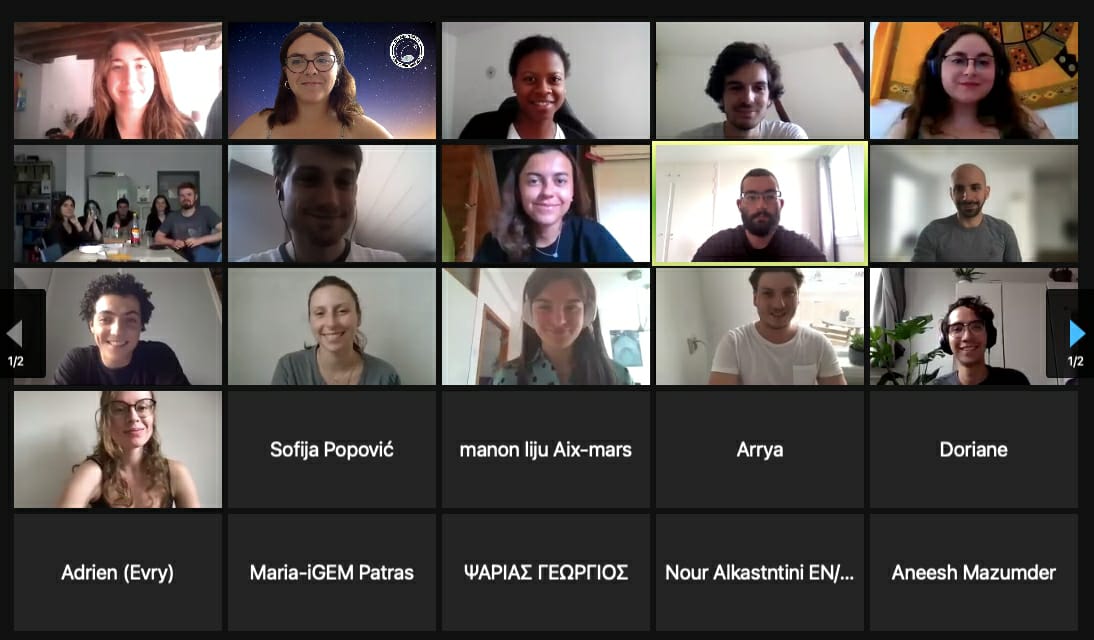 Our collaborations were multiple and our interactions were international. Indeed, apart from the Cité de la Science and the French MeetUp which allowed us to collaborate with French and French-speaking teams, the BioPuzzle application that we created allowed us to involve international teams, by playing our biobricks puzzle mobile game!
Check our "Education" page for more infos