To evaluate the performance of our targeted directed evolution system, Evolution.T7, we used two different fluorescent proteins, sfGFP and mCherry, and one antibiotic resistance gene, AmpR, all in one single composite part, BBa_K3766111. Full detailed results of fluorescence measurements are presented on the “Engineering” page of this wiki, while the effects of AmpR and its evolved variants on the “Contribution” and “Proof of Concept” pages respectively. All experimental data are presented using standard units of measure, obtained by converting the arbitrary units with calibration curves.

OD600nm calibration for a 96-well plate

In vivo growth experiments using E. coli cells were performed in either a CLARIOstar (BMGLabtech) or an Infinite 500 (Tecan) plate reader using either an opaque wall 96-well polystyrene microplate, the COSTAR 96 (Corning), or a transparent 96-well polystyrene microplate (Sarstedt).
To be able to convert the OD600nm arbitrary units into Particle Count, we performed the calibration of our experimental setup following the iGEM Plate Reader Abs600 (OD) Calibration protocol [1]. The calibration suspensions were prepared starting from dry Monodisperse Silica Nanoparticles with a diameter 950 nm from Nanocym that were resuspended in water to reach a stock solution of 3x1010 particles / mL (the calculations for silica beads suspension were performed using the online tool developed by the iGEM 2020 Evry Paris-Saclay team).
The results presented in figure 1, show limited but visible differences between the different plate readers and plate types. Most importantly, they highlight that both the CLARIOstar (BMGLabtech) and the Infinite 500 (Tecan) plate readers do not give much sensitivity to low values of Abs600 under about 0.1, but we can reliably measure above 0.1.

Figure 1. Particle standard curves used to convert OD600nm values to the number of particles in suspension.

GFP and mCherry calibrations for a 96-well plate

In vivo growth experiments using E. coli cells expressing GFP and mCherry were performed in a CLARIOstar (BMGLabtech) plate reader using an opaque wall 96-well polystyrene microplate, the COSTAR 96 (Corning). To be able to convert the arbitrary GFP fluorescence units into Molecules of Equivalent FLuorescein (MEFL) / particle and the arbitrary mCherry fluorescence units into Molecules of Equivalent Texas Red (MERT) / particle, we performed the calibration of our experimental setup following the iGEM Plate Reader Fluorescence Calibration protocols [2,3].
From the beginning of our in vivo experiments, we quickly noticed that both fluorescent proteins were not highly expressed in E. coli cells and that the sensitivity of the plate reader detector (i.e. the gain) needed to be adjusted in order to capture the differences in expression levels in various conditions. This raised a few questions: how high should each gain value be raised? when increasing the gain, would the linear relation between the Fluorescein / Texas Red concentration and the fluorescence values be preserved and to which extent, and in which range? At what Fluorescein / Texas Red concentration would the detector saturate? …
To address those questions, we performed the fluorescence calibration throughout the full gain range possible on our CLARIOstar (BMGLabtech) plate reader, with a resolution of 100 gain value units. The results presented in figures 2 and 3, show that for both Fluorescein and Texas Red, the standard curves show a linear relationship between the arbitrary fluorescence values and the compound concentration over the full range at a gain value of 700-800 for Fluorescein, and at 1500-1700 for Texas Red (Tables 1 and 2). This linear relationship between measured fluorescence and true fluorescence breaks down at extreme gains: at high gain values only small compound concentrations can be reliably measured, whereas it’s the contrary at low gain values. 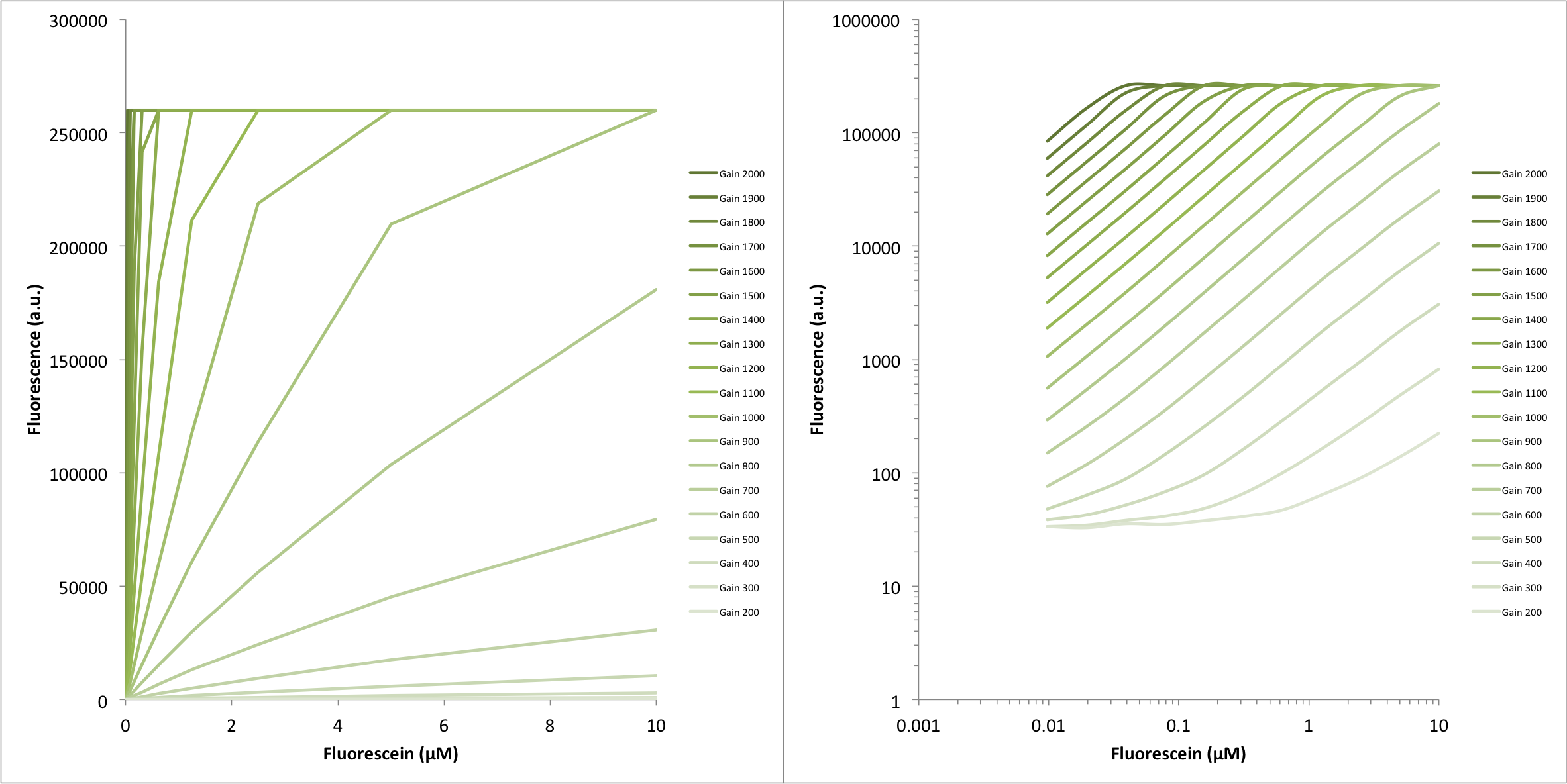 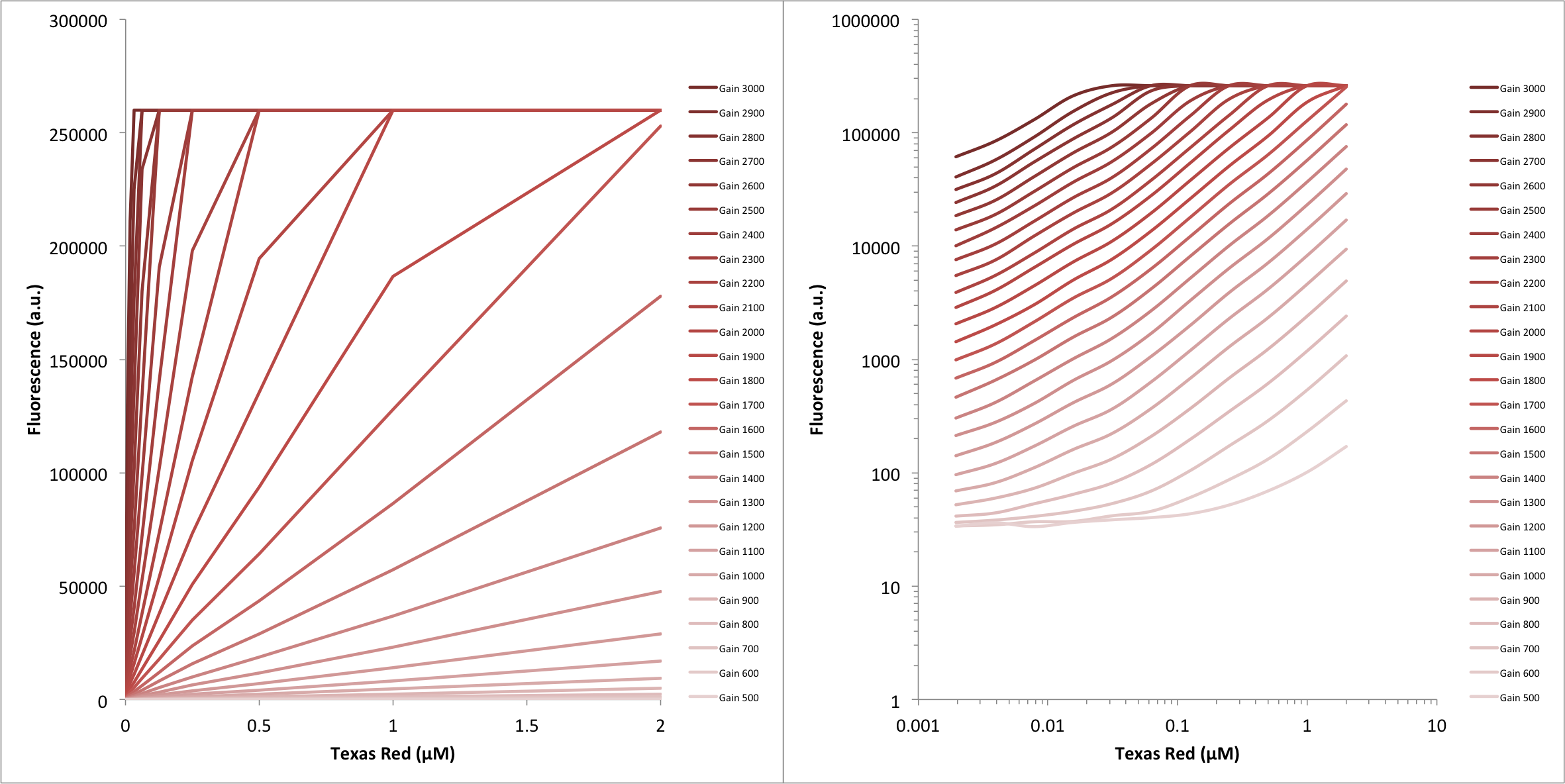 In addition, we computed the MEFL / a.u. and METR / a.u. ratios within the linear ranges of the standard curves presented in Figures 2 and 3 (Tables 1 and 2), and observed that they vary exponentially with the gain value (Figure 4). The fitted equations are useful for converting data collected at one gain to that at another gain (of course, within the previously determined safe range) without performing new calibrations.

Moreover, as in our in vivo experimental setup, sfGFP and mCherry are expressed simultaneously within E. coli cells, we used the calibration protocols to evaluate if both proteins can be properly quantified simultaneously. For this, Fluorescein and Texas Red were mixed in each well to the same final concentrations as in classical iGEM Plate Reader Fluorescence Calibration protocols [2,3]. The results depicted in Figure 5, show an increase by 35% of both MEFL / arbitrary fluorescence units and METR / arbitrary fluorescence units values when Fluorescein and Texas Red are together, suggesting limited, but non-negligible, interference between the two compounds.

We were successful in calibrating our experimental setups in classical 96-well plates for in vivo measurements of the expression of two different fluorescent proteins, sfGFP and mCherry, concomitantly. In addition, we evaluated the limits of the fluorescence detection as a function of the sensibility adjustment that can be performed on our plate reader. We estimate that such extended calibration should become the norm for all plate readers to identify the safe range of gains to use.