of an existing part

Lac operon gene regulation is one of the best studied prokaryotic transcriptional regulatory systems that have been used in genetic engineering extensively. Lac operon comprises three genes which are necessary for bacteria to switch its carbon and energy source from glucose to lactose. LacI (BBa_K091121 and BBa_K1088018) is the main regulator of this operon which binds to lac operator to repress the transcription of the operon. In E. coli, this repression should allow for some leakiness for the regulation and switch in carbon source consumption to be performed effectively. LacI cannot bind to the operator if it binds allosterically to allolactose, an isomer of lactose. This means that lactose should enter the cell to induce the lac operon expression. Indeed, the transporter allowing lactose entrance should be present in the membrane, and it is a part of the lac operon. Thus, this leakiness helps the cell to be ready to switch its metabolism towards lactose upon lactose presence and glucose depletion [1].

However, in genetic engineering, researchers are interested in non-leaky promoters allowing them to have tighter control over gene expression. Attempts have been performed to modify LacI repression properties. Gatti-Lafranconi et al. used rational mutagenesis to change the W220 residue in the core domain which is responsible for interaction of the protein with the inducer. This group reported that W220F mutation increases the dynamic range of the repressor as well as reducing the leakiness to 10% of the wild type LacI [2]. As an example of using directed evolution for this purpose, Q18M, A43V and F161Y mutations were reported to ameliorate the dynamic range and leakiness drastically [3]. The same mutations were reported by Fudan-TSI iGEM 2019 team for LacI improvement (BBa_K3257045). We used our directed evolution method Evolution.T7 to decrease LacI leakiness without changing its dynamic range compared to the wt LacI.

Generation and selection of LacI mutants

For LacI evolution (Figure 1), we decided to use E. coli MG*-SacB-TEM-Δung Δnfi cells kindly provided by Dr. Luis Ángel Fernández, at Centro Nacional de Biotecnología (CNB-CSIC) in Spain. This strain harbors two mutations Δung and Δnfi that were shown to be important for enhancing the mutation rate of the mutagenic system [4]. ung is a gene encoding the uracil DNA N-glycosilase that is involved in the elimination of uracil from DNA molecules [5], while nif is a gene encoding the endonuclease V of E. coli which eliminates inosines [6,7]. Uracil and inosine are nucleobases produced by the action of cytosine and adenine deaminases, respectively, which are the mutator domains of our Evolution.T7 system.

Moreover, this strain has two selection genes integrated into its genome at the flu locus: SacB and TEM-1 both under the control of a LacI regulated promoter. SacB encodes the levansucrase of Bacillus subtilis, converts sucrose to levan which is very toxic for E. coli. TEM-1 is a β-lactamase (Uniprot P62593) associated with the resistance mechanism against the large family of β-lactams. These two genes are used as positive and negative selection markers. 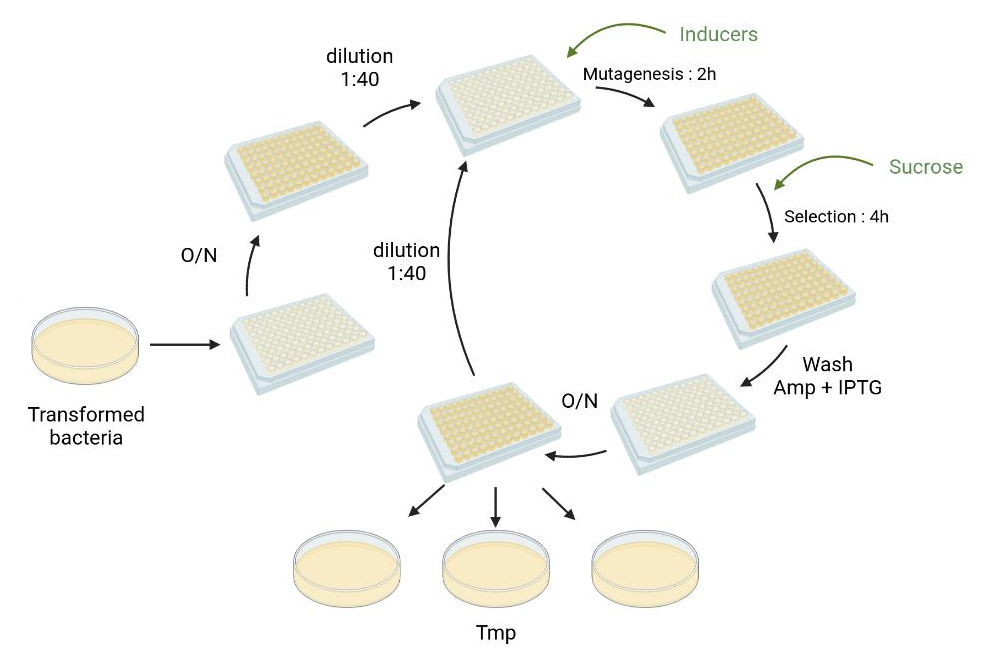 E. coli MG*-SacB-TEM-Δung Δnfi cells [4] were first transformed with a plasmid carrying the LacI resistance gene within the Evolution.T7 system mutational region, BBa_K3766190 in pSEVA73 backbone [8], together with different combinations of forward and reverse mutators in pSEVA22 and pSEVA47 backbones, respectively (Figure 2) (see the “Engineering” page of this wiki for details). 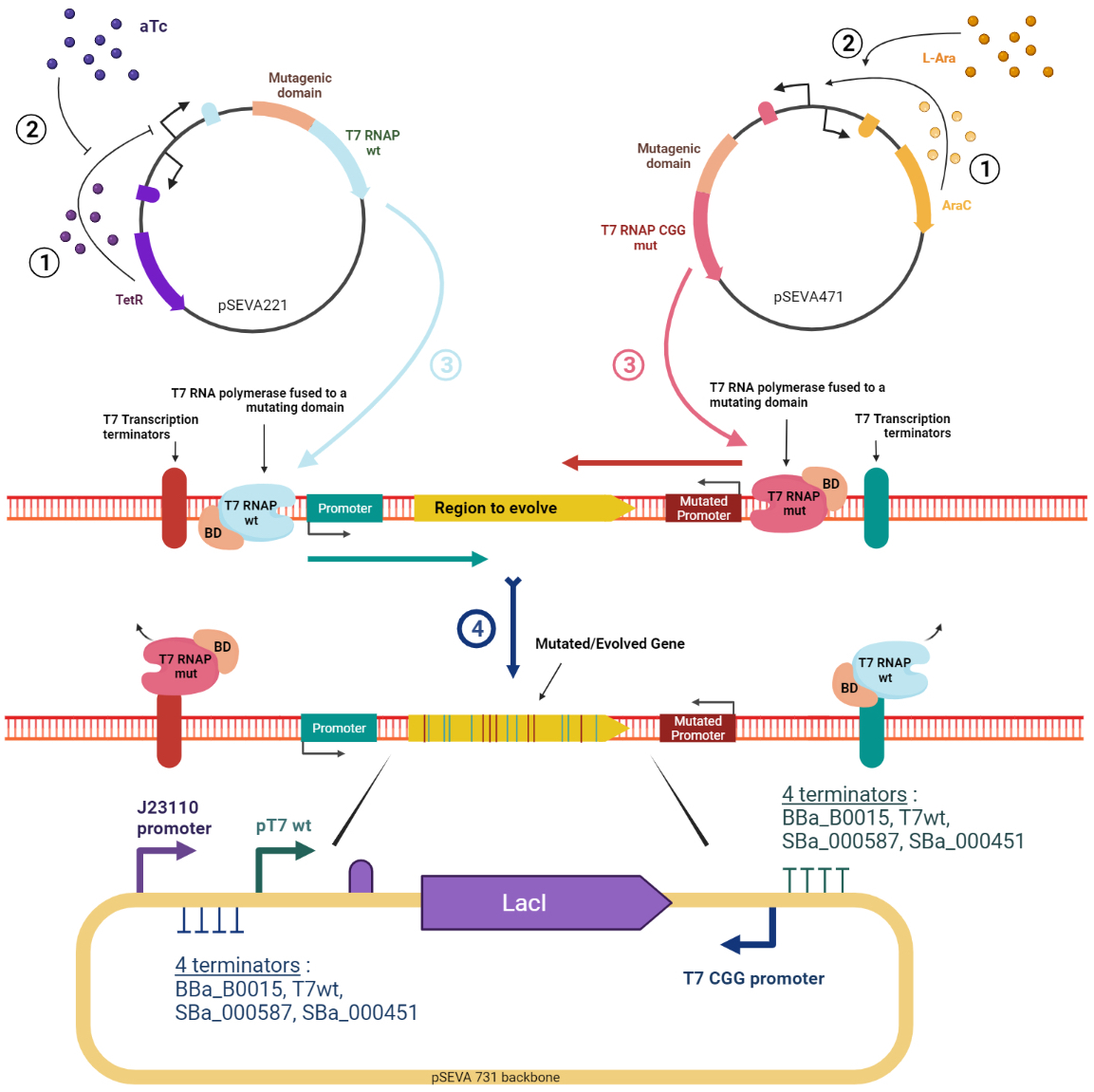 After 2 hours of incubation at 37 °C at 200 rpm, sucrose at a final concentration of 60 g/L was added to allow the negative selection of bacteria that express a LacI variant that is not able to tightly repress the SacB expression.

After 4 hours of incubation at 37 °C at 200 rpm, cells were washed and resuspended in into minimal salts media [9] containing the same antibiotics and inducers but also with 100 µg/mL ampicillin and 100 µM IPTG.

The incubation was continued overnight to allow the positive selection of bacteria that express a LacI variant that are able to release the repression of TEM-1.

The next day, 5 µL of various dilutions of this culture were spotted onto LB agar plate containing 10 µg/mL trimethoprim. The negative - positive selection was continued for 3 more cycles following the same procedure. Plasmid DNA was extracted from selected bacterial colonies from the LB agar plates obtained after the different rounds of selection from the various parallel evolution experiments with different combinations of mutator domains.

To identify gain of function mutants, those plasmids were co-transformed into E. coli NEB5ɑ cells together with a reporter plasmid carrying the sfGFP gene under the control of pTacI promoter in pSB3T5 backbone (BBa_K3766112). Non fluorescent cells were selected and the expression of sfGFP was quantified in the presence of various IPTG concentrations.

Among all clones, the mutant C1 carrying the K325R mutation is shown to be 50% less leaky in the absence of IPTG based on the normalized fluorescence signal of its downstream fluorescent (Figure 3A). Moreover, it’s ON/OFF ratio is increased compared to wild type LacI (Figure 3B).

Figure 3. In vivo characterization of sfGFP-LVAtag expression by E. coli NEB5ɑ cells harbouring the LacI K325R mutant expressing plasmid (BBa_K3766191) together with reporter plasmid carrying the sfGFP-LVAtag gene under the control of pTacI promoter in pSB3T5 backbone (BBa_K3766112). The negative control has been performed with an empty pSEVA731 vector the positive controls with the wild type LacI (BBa_K091121 and BBa_K1088018) expressed in the same condition (BBa_K3766190). (A) Fluorescence values were normalized by OD600nm and, using the calibration curves presented on the "Measurement" page of this wiki, we converted the arbitrary units into Molecules of Equivalent FLuorescein (MEFL). (B) MEFL / Particle fold changes in the presence of 10 µM IPTG compared to the MEFL / Particle value in the absence of the inducer. The data and error bars are the mean and standard deviation of at least three measurements on independent biological replicates.

We have successfully used our Evolution.T7 targeted directed evolution tool to generate and select a LacI mutant with enhanced repression capabilities in the absence of an inducer (BBa_K3766091). This represents an improvement of parts BBa_K091121 and BBa_K1088018 used by previous iGEM teams.