The lysis time of bacteriophage T4 in E. coli BL21(DE3) under different multiplicity of infection (MOI) had been measured (Figure 1). We found that our most bacteria could be lysed around 50 minutes in different MOI while the control group grew continually. This result indicated our final product may finish the detection of pathogen in an hour or so, which is a fast detection compared to traditional bacteria culture method.

In the future, we need to measure different kinds of bacteria using our engineered phage. 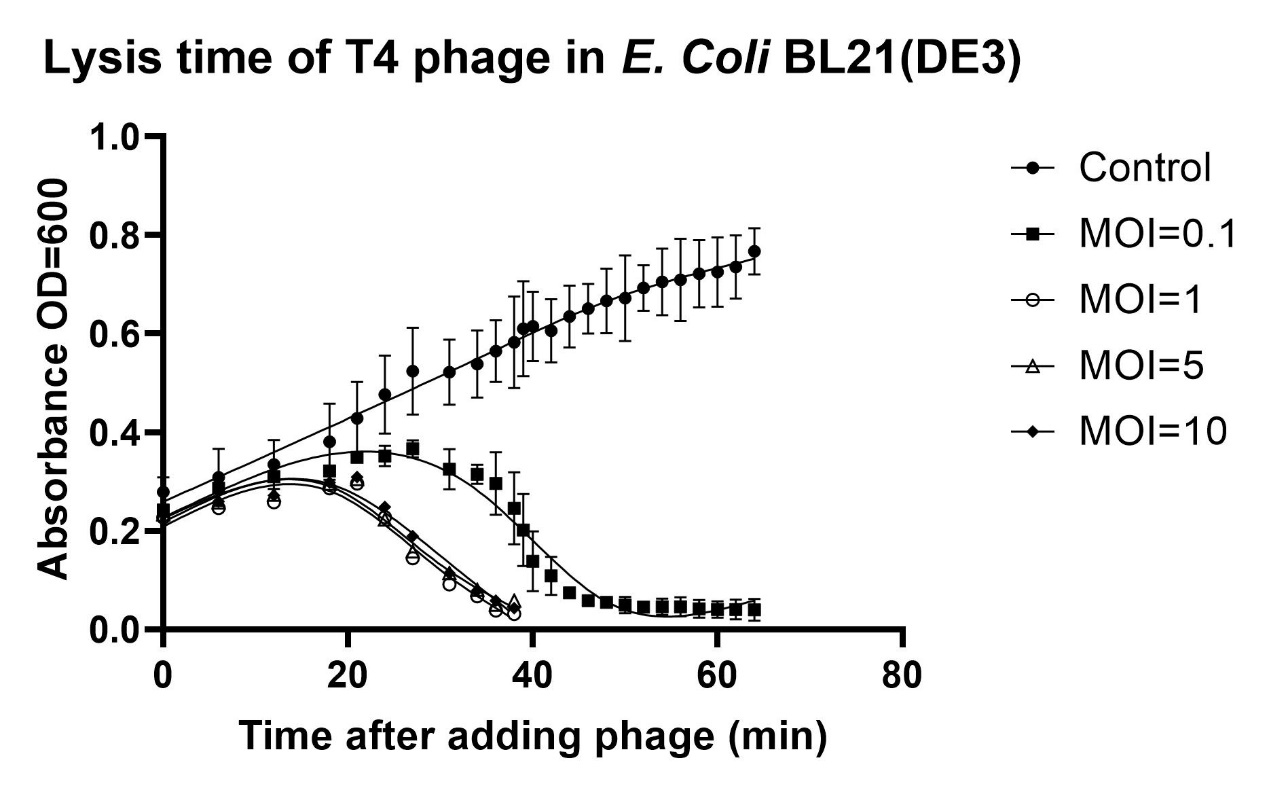 We applied CRISPR/Cas9 to edit our phage. Due to lack of time and experience, we didn’t create our desired mutant phage in the end. However, we verified one potent crRNA for gp23 from the literature, which could be further applied in the selection of our mutant and made it more possible to create mutants.

We designed 6 crRNAs for gp24 and used one crRNA for gp23 from young et al. (2014). The cutting efficiency for each crRNA in bacteriophage T4 had been analyzed by efficiency of plating (EOP) if the crRNA is effective at targeting and directing Cas9, it will induce a DNA double-strand break (DSB) hence killing T4 phages resulting in fewer plaques. All of the crRNA for gp24 had similar EOP with control group (pCRISPR and pCas9 plasmids), which indicated the genome of phage was not disrupted by those crRNA. However, the crRNA for gp23 from literature had very low EOP, showing potent cutting efficiency of T4 phage genome because it induced an 8-log reduction in EOP.

According to the literature, we knew that the glucosyl-hydroxymethylated cytosines (ghmCs) in phage genome hinders the action of Cas9 protein, leading to the failure of cutting finally.

Therefore, the selection potent crRNA for editing phage using CRISPR/Cas9 is the most unsure and difficult part, needing lots of efforts. 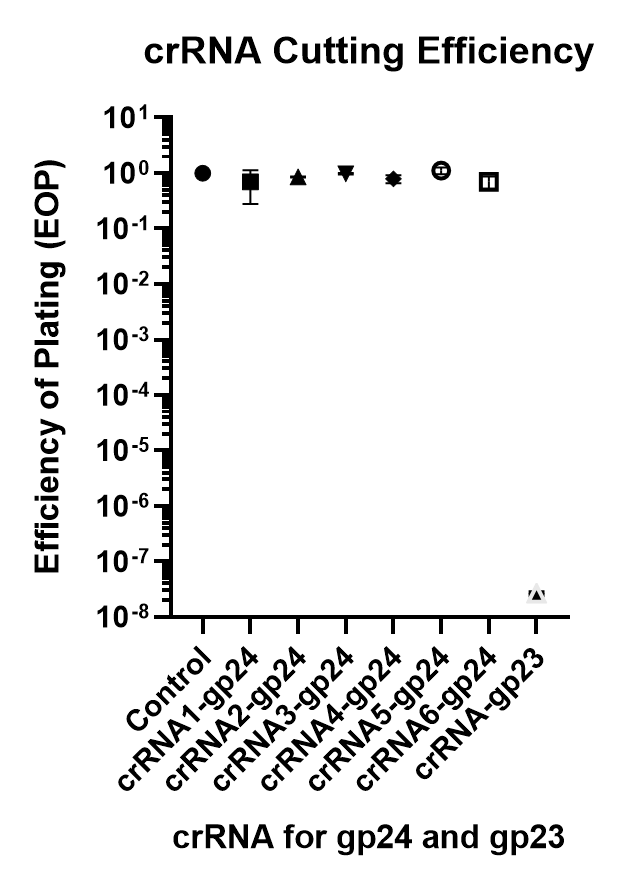 To verify the cutting function of our crRNA for gp24, we also performed the cutting of gp24 gene on pCas9 backbone. We applied qPCR to detect the quantity of mRNA of Cas9 gene in different cells with different crRNA. Our control group was the cell with empty pCRISPR backbones and pgp24-rhaB-Cas9 plasmids. The experimental groups contained different pCRISPR-crRNA plasmids and the same pgp24-rhaB-Cas9 plasmids with control. The results showed that all our three crRNAs had the ability to recognize gp24 gene on the plasmid and could form complex with Cas9 to cut the plasmid, which significant differences between control group and experimental group were observed (p< 0.0001). As the result indicated, crRNA1 might have the potent cutting efficiency while crRNA2 and crRNA3 might be little weaker than crRNA1 in vitro. Thus, we can conclude that our crRNAs for gp24 had no functional fault. 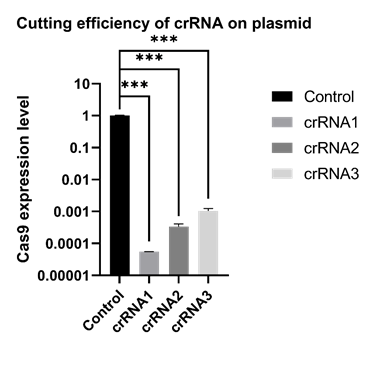 Results of regulation of RhaB promoter

The regulation of Cas9 protein expression by RhaB promoter was performed in E. coli BL21 (DE3) containing two plasmids (pRhaB-Cas9 and pCRISPR- gp23). We added 0.4% (w/v) L-rhamnose and 0.4% (w/v) D-glucose and the medium without sugar to culture the cell to OD600 around 0.5. We used these cells to perform phage plaque assay to verify the cutting efficiency of crRNA for gp23 and trace back the Cas9 expression. From the result of phage plaque assay, we all three plates had almost no phage plaque compared to BL21 control group, which meant our potent crRNA binding Cas9 protein cut the gp23 gene in phage genome so that the phage could not survive and had no generations (Figure 4). The result also indicated our promoter could be activated even without inducer L-rhamnose. Moreover, there were three plaques on the plates supplied with D-glucose likely observed by naked eye, which showed serval phages escaped from the CRISPR/Cas9 complex cutting and survived to have generations. Therefore, we supposed that the expression of Cas9 was the lowest inside the host bacteria treated with 0.4% (w/v) glucose while the expression of Cas9 in the cell either treated with L-rhamnose or without any sugar might be similar. The result of quantitative PCR for those cells partially supported our hypothesis. From the qPCR results (Figure 5), we found that our RhaB promoter might maintain a relative high expression without any inducers and might be repressed after adding L-rhamnose or D-glucose compared to the group without any sugars, which was contradicted with results from other literatures that RhaB promoter was activated by rhamnose. Therefore, RhaB promoter is not suitable for us to regulate the expression of Cas9 due to some unknown mechanisms.

We conclude our result as a negative result, crRNA cutting gp24 on plasmid in vitro. 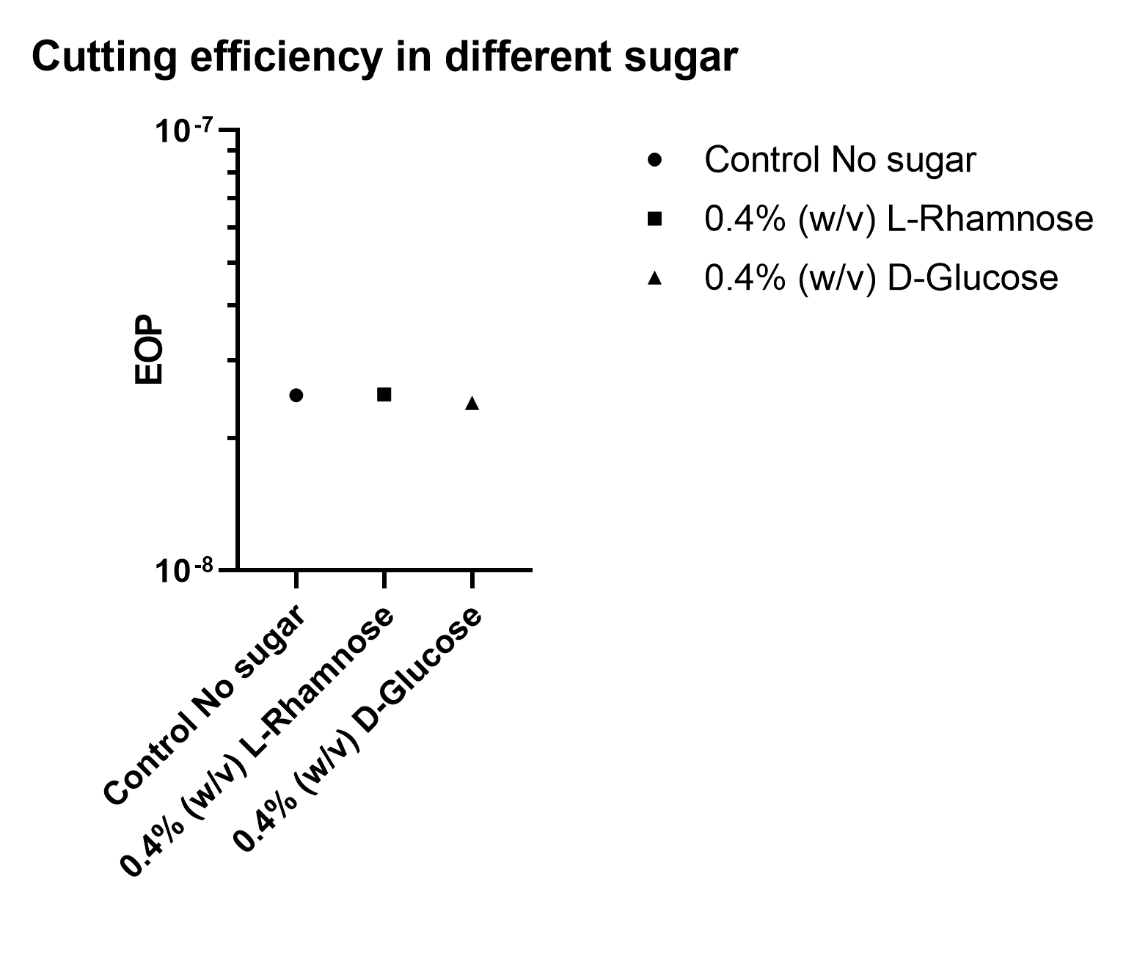 (Figure 4. the result of crRNA-gp23 cutting efficiency performed by either adding sugar or not adding sugar.) 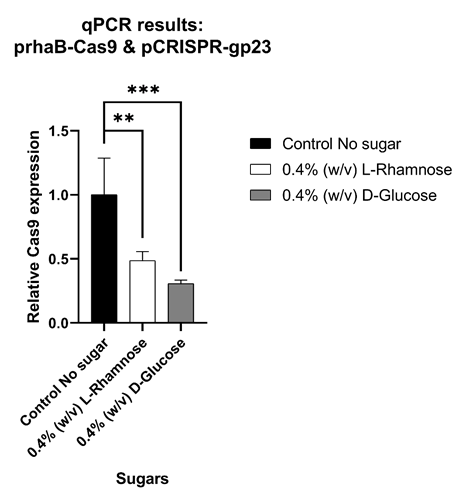 LuxR in vivo expression by BL21(DE3) 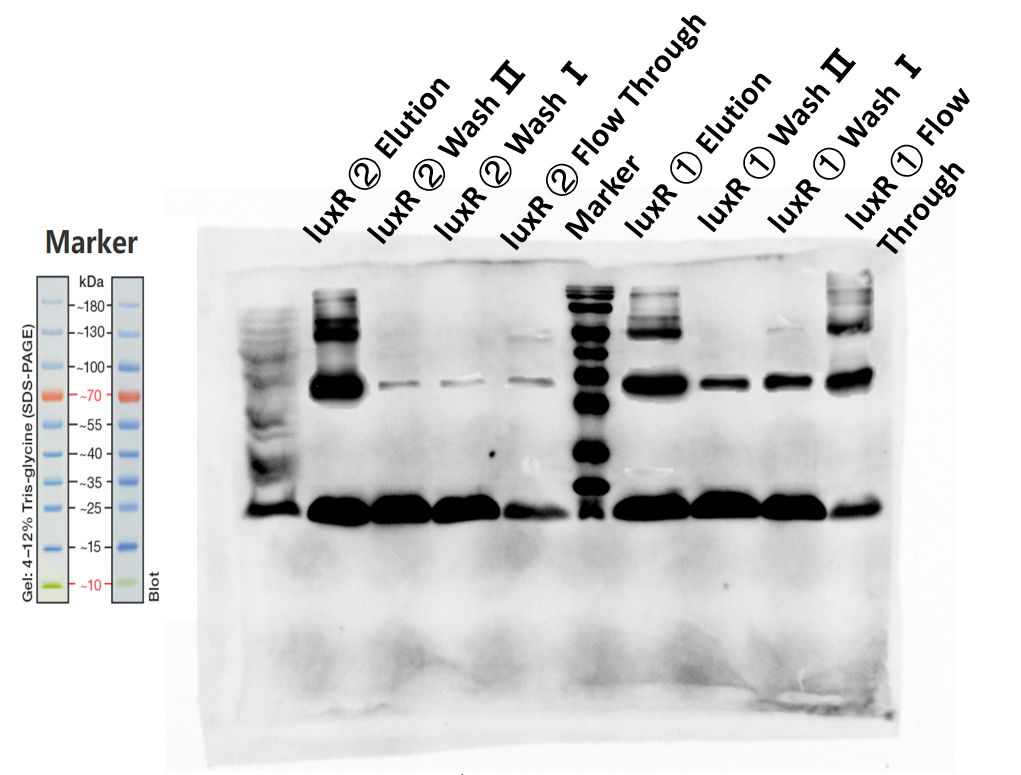 Figure 5. The result of WB for confirming the expression of LuxR.

The expression of eGFP with LuxR induced promoter in vitro

The expressed LuxR (by NEB cell-free system) (denoted as NEB-LuxR) were added into sets of Promega cell-free system as the transcription factor of pluxR_eGFP. Detection of excitation and emission by plate reader, The peak of the emission spectrum was detected at ~510nm, while that of the excitement spectrum was at ~490nm. 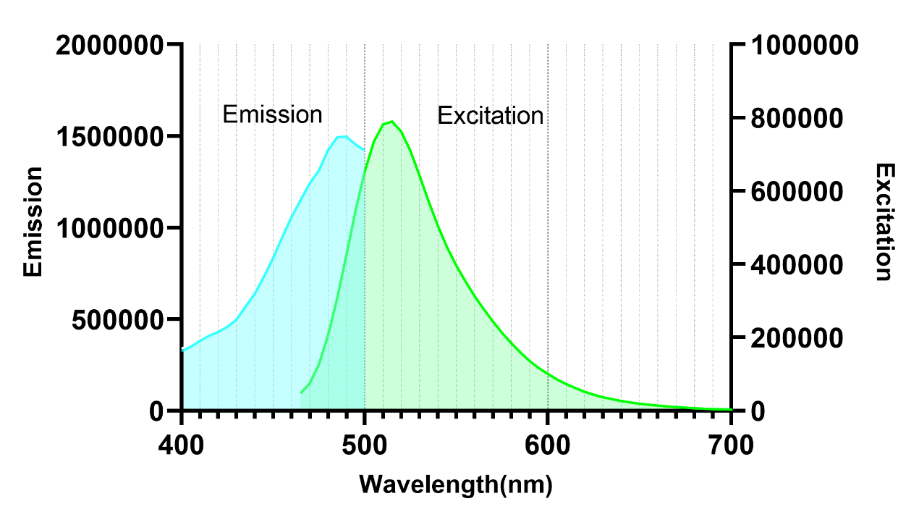 Figure 6. The measured Emission and Excitation of the NEB cell-free expression.)

The preliminary experiment for S-cruve construction

The original stock and the two dilutions of NEB-LuxR were added into 3 sets of Promega cell-free system as the transcription factor. After the expression of 4 hours, the emission curve of the 3 samples were measured, the value of the peak at ~510nm were obtained and used to construct the S-curve. 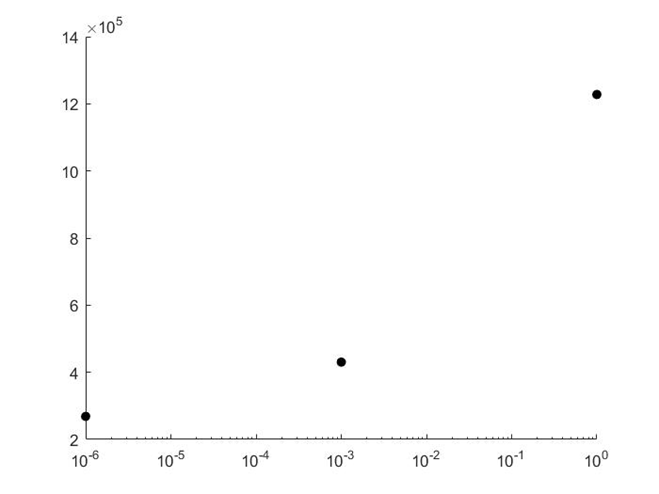 Figure 7. The average expression rate of the three LuxR concentration.

The original stock and the 8 sets of dilutions of LB-LuxR were added into the Promega cell-free system as the transcription factor. The real-time expression of eGFP were monitored by the plate reader. The average expression rates before the stationary phase were calculated and used to construct the S-curve. 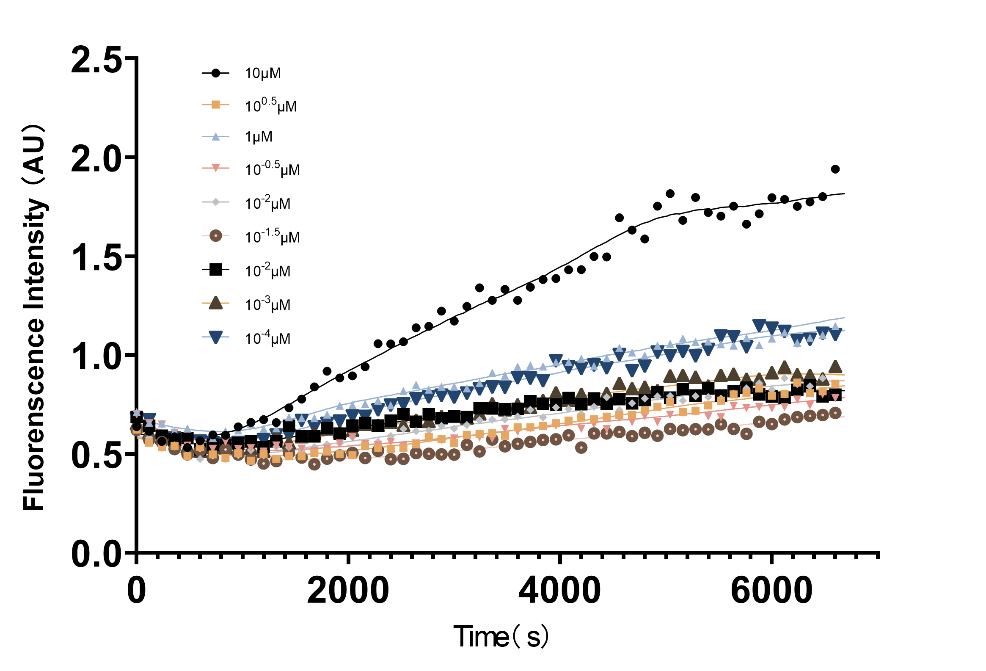 6-fold, 60-fold, 120-fold, 600-fold, 6000-fold and 60000-fold dilution of C-LuxR were prepared. The real-time expression of eGFP were monitored by the plate reader. The average expression rates before the stationary phase were calculated and used to construct the S-curve. 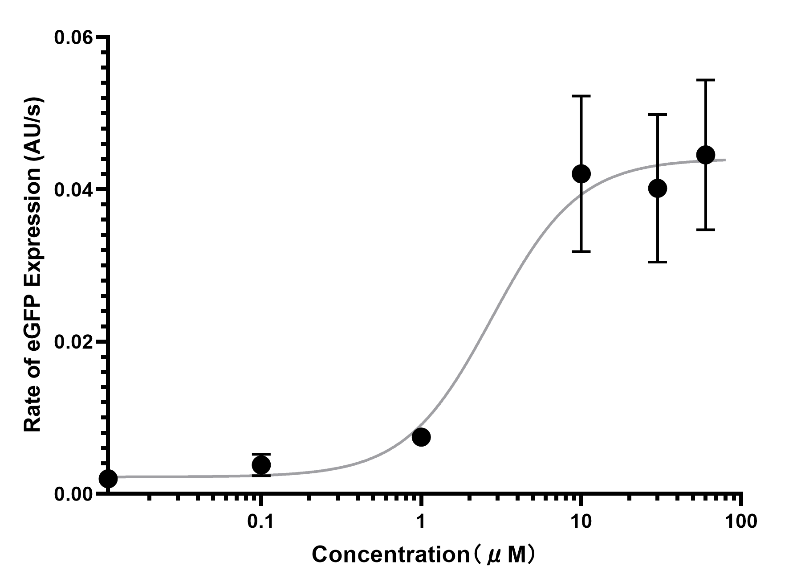 Inhibition of plasmid with pLuxR

Use promotors with nonsense code behind as competitive inhibitors of the LuxR induced protein expression. Comparing the two sets with 5μM LuxR, the one with inhibitory plasmid displayed a lower expression rate than that of without the inhibitor. Comparing the two sets with inhibitor, the one with higher concentration of LuxR displayed a higher expression rate than that of with lower LuxR concentration. 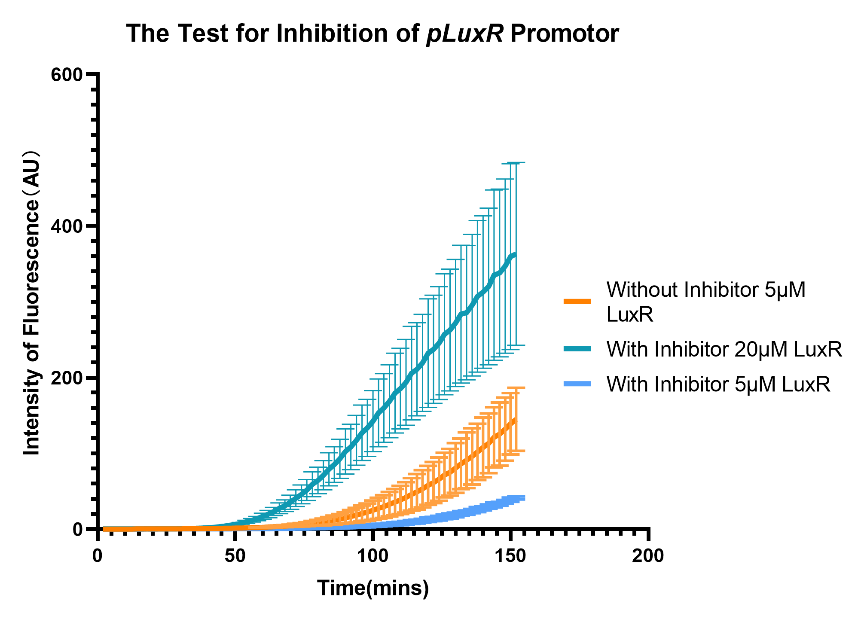 Figure10. The Inhibition ability test with 5 and 20μM.