From the literature review and field research, we decided to design a good and responsible bacterial detection kit.

Incorporating all of the information allows us to define the project goal as Fast, Multiply bacteria detection, Quantitative, and Visible.

To fulfil these requirements, we came up with a semi-quantitative system which can be divided into three main parts: the Detection and Signal Generation module, the Signal Modulation module, and the Signal Quantification and Visualization module.

The Signal Modulation module consumes a constant amount of excessive LuxR dimer from the upstream, mainly in response to the demand of system optimization (see Engineering and Modelling for details)

The Signal Quantification and Visualization module is responsible for the reception and transformation of the upstream LuxR signal, outputting fluorescence signals of eGFP which is visible to naked eyes when its concentration is high. The bistable synthesis/degradation system in it serves as the semi-quantification device, giving a “yes” or fluorescence signal when the bacteria number exceed the standard and a “no” or muted signal when it does not.

Apart from our biological device itself, the safety of it is also concerned. We knockout an essential protein of the phage using CRISPR/Cas9 to prevent the leakage and thus diminish its potential harm of the environment.

Bacteriophages can specifically infect bacteria. T4 can infect generic E. coli though specifically binding to lipolysaccharide (LPS) or OmpC protein on the surface of E. coli and then injecting its genome into the bacteria to start its life-cycle (Miller et al., 2003, Tétart et al., 1996). After that the phage will efficiently utilize the transcription and translation systems in the bacterial host to produce more of its own offspring in a short infection cycle (Hinkley et al., 2018). At the end of the infection, molecules such as lytic enzymes in the host produced by T4 will lyse the entire bacterium and release new offspring.

Therefore, in our design, we take advantage of original advantages of phages: specific recognition of a class of bacteria, production of a large amount of protein in a short period of time, and the ability to distinguish between dead and alive bacteria to build our detection part for our system. We hope that we can insert an exogenous gene, LuxR into the essential capsid gene of the phage. During the infection cycle of the phage, our phages can infect the bacteria normally, express the exogenous protein in large quantities inside bacterium, and finally lyse the bacterium to release the expressed protein but not the intact phage particles (Figure 1). 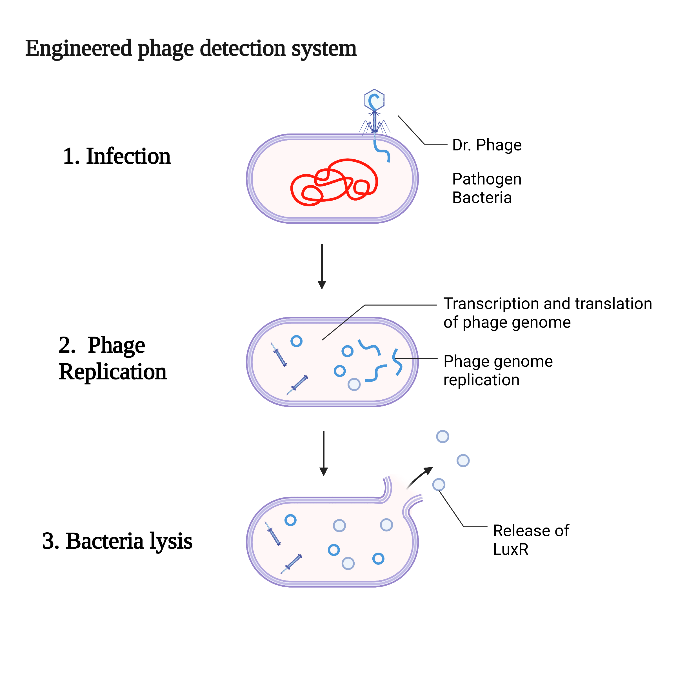 (Figure 1. the illustration of the upstream detection of our Dr. Phage. Created with BioRender.com)

Next, we need to know, if our assembly-deficient phage can infect and lyse the cell normally. The deletion of gp24 from T4 genome will not influence the infection ability of T4 phage compared to null mutant phage (Engman and Kreuzer, 1993). Moreover, during the interview with Prof. Rong in our university who is an expert in virus research, she affirmative agreed with our idea that if we do not disrupt the genes related to the ability of lysis, our engineered phage will lyse the cell when the lysins accumulate in a certain number.

Our goal is to make a kit that can fast and quantitatively detect bacteria. Therefore, after our phage induced the release LuxR, we need to know whether the amount of our protein can be positively correlated with the quantity of infected bacteria. Hinkley et al. (2018) engineered T7 phages allowing the infected colonies to emit fluorescence or to be visible adding the substrate of alkaline phosphatase and thus count the colonies on the carbohydrate filter. Theoretically, since the fluorescence emits from the proteins produced by the exogenous genes carried by the phage, the stronger the fluorescence intensity indicates there are more bacteria.

To demonstrate the positive correlation relationship between LuxR protein and infected bacteria, we performed modeling predictions for the simulations of expression of LuxR of our engineered T4 infected bacteria in different bacteria and phage ratio, using the Pinetree, a bioinformatic software developed by Austin Texas university and MATLAB. Based on these simulations, we also wanted to find the best initial phage number in the detection system in order to output an optimized signal for downstream.

The upstream signal of LuxR is sometimes required to be modulated for system optimization purpose: the signal may not lie in the favored interval of concentration for the downstream system. This module is therefore designed for signal intensity-modulation.

This proposal is derived from the intrinsic characteristic of transcription factor binding to its promotor. A certain amount of double-stranded DNA of the promotor sequence is immobilized onto a surface through which the cell lysate flows. A proportion of LuxR binds to these strands and is separated from the lysate. 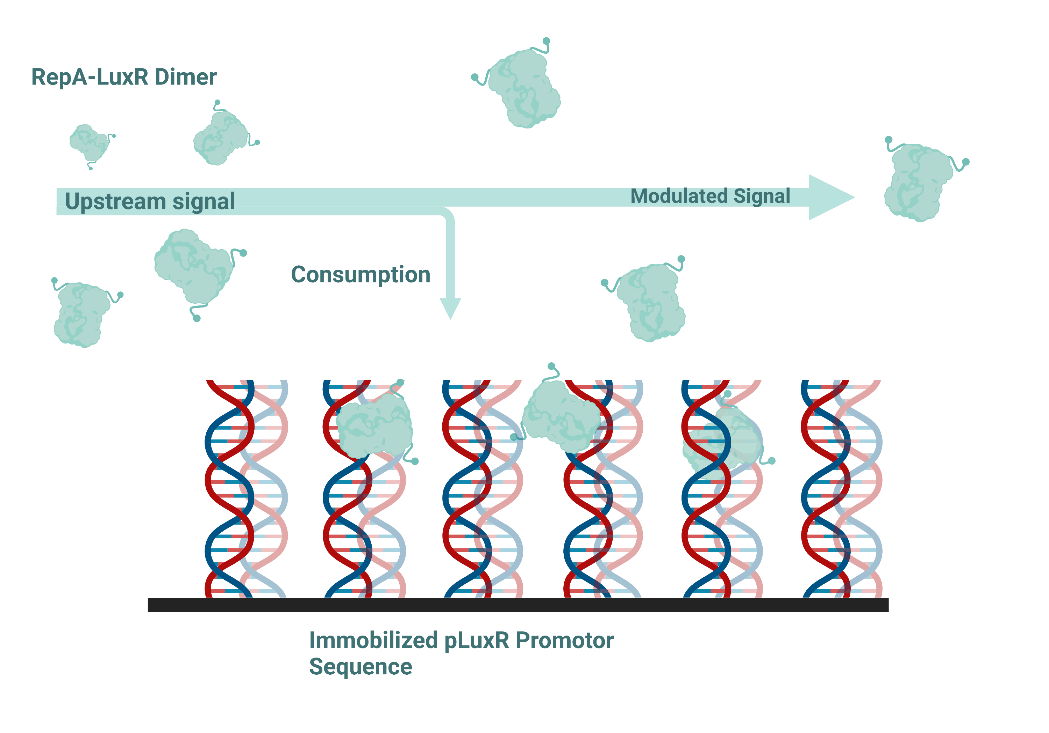 (Figure 2. The illustration of the working principle of LuxR-consuming signal modulation device.)

The upstream signal molecule is hence partially-consumed, resulting in the shifting of the input signal into the downstream system. 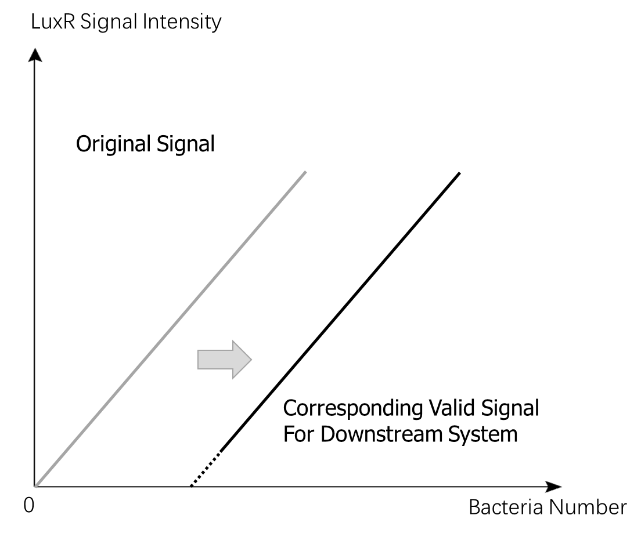 (Figure 3. The modulation result of the signal)

The upstream signals carried by the LuxR molecules contain two parts of information: the “present” of the target bacteria carried by the molecules themselves, and the “number” of that bacteria represented by the concentration of this molecule. The purpose of the signal visualization section is to detect these signals and convert it into signals that are more easily to be observed and interpreted.

To convert the first half of information, the “present” of bacteria, we used a straight forward expression circuit. The LuxR molecules from the upstream, which is already bound to AHL and dimerized, serve as the transcription factor for the downstream protein expression system, inducing the production of eGFP. 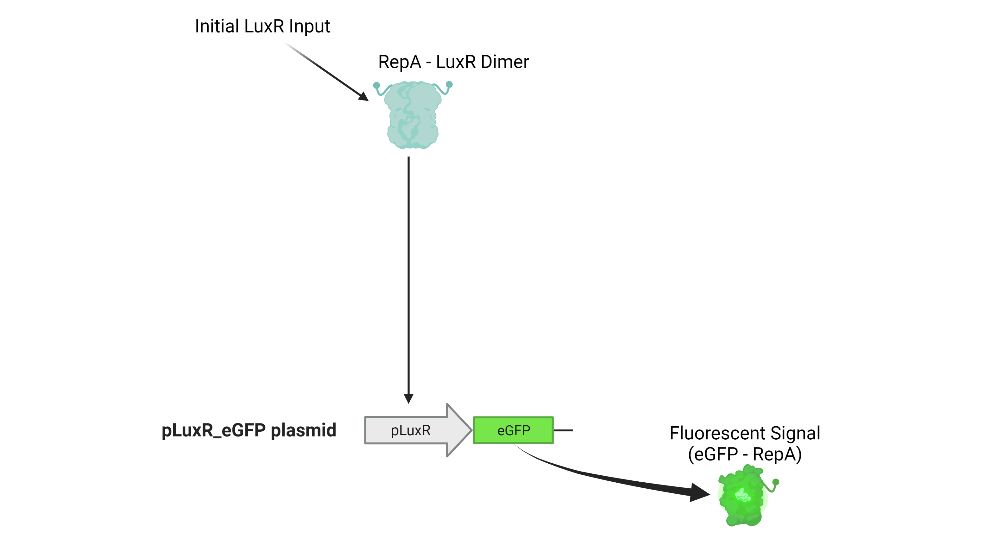 The convertion of the second half of the information, the number of bacteria, is achieved by a more complex system, the synthesis/degradation biostable system.

The convertion of the second half of the information, the number of bacteria, is achieved by a more complex system, the synthesis/degradation biostable system. 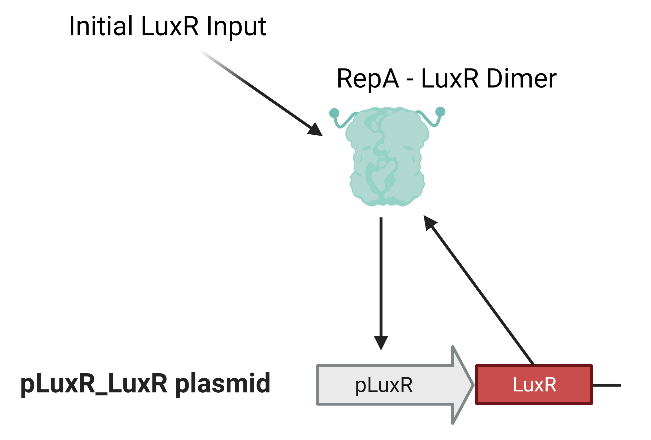 (Figure 5. The positive-autoregulation of LuxR. Created with BioRender.com)

The LuxR-dose-response eGFP expression rate is well-described by the Hill Equation, which is a sigmoidal-shape curve. Although there are two “platform period” where the rate hardly changes when LuxR concentration increase, the lower “plain” and the higher “plateau”, the expression rate is overall increasing. 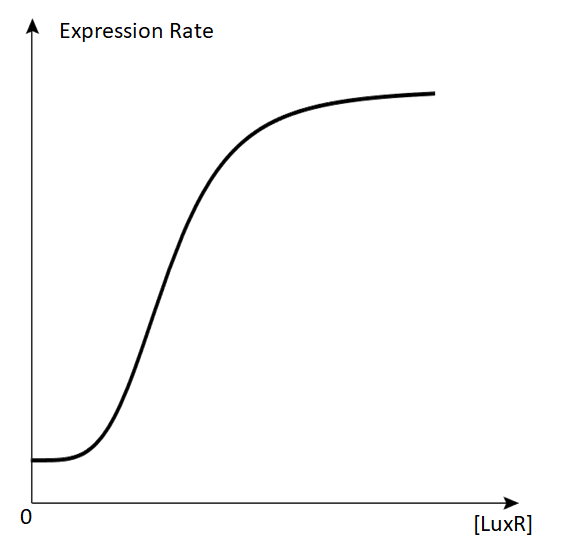 We also constructed a degradation system to counteract with the synthesis of LuxR. N-terminal degradation tag RepA were added onto the LuxR gene. This tag is recognized by protease ClpAP, leading to the cleavage of LuxR into short peptide fragments. This system pins down the Level of RepA-tagged proteins.

(Figure 7. The degradation of RepA-tagged LuxR by ClpAP protease. Created with BioRender.com)

The degradation is described by the Michaelis-Menten Equation, which is a hyperbola-like curve; the segment below the KM can be approximated to a direct proportion function. 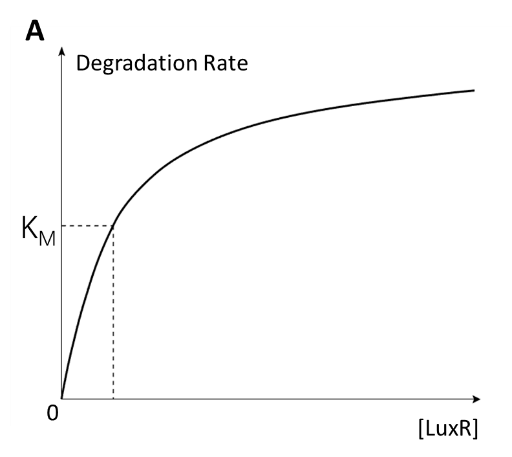 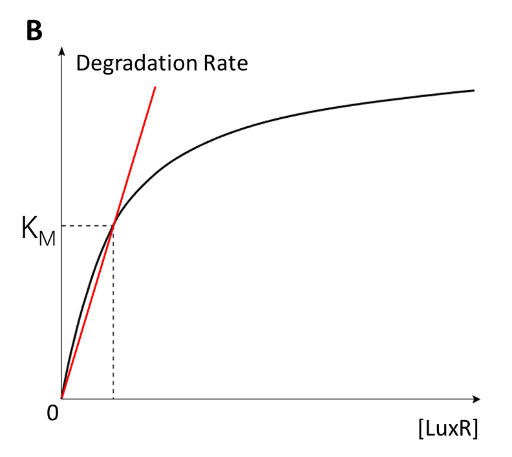 (Figure 8. A.The hyperbola-like dose-response degradation rate curve. B. The approximation to a direct proportion function of the segment below KM, denoted by the red line.)

With proper positioning, these two systems form a bistable system with only two states in sense of the level of the reporter protein, eGFP.

In one situation, the two system is combined into a bistable system with a threshold and two equilibrium point. 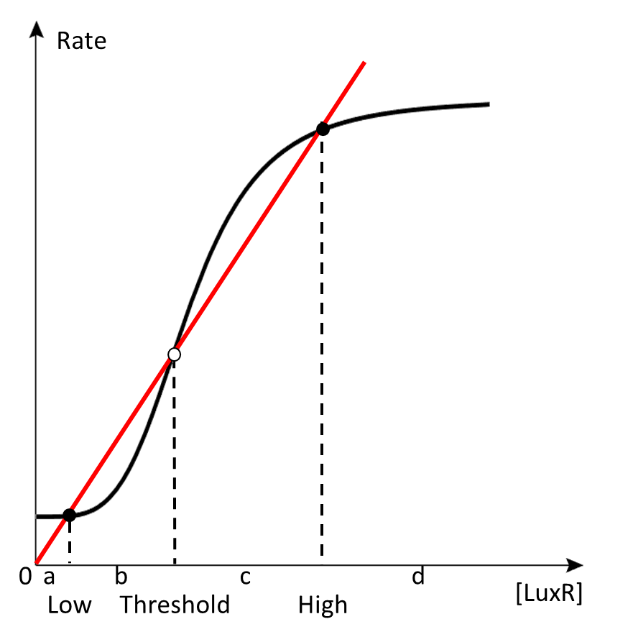 (Figure 9. The curves of the two core reactions of the bistable system. The threshold is denoted by a white dot; the other two intersection of the two curves denoted by two black dots are the lower and higher equilibrium point. The x-axis was divided into 4 sections. Initial input of LuxR concentration in section a and b results in the convergence to the “Low” point, while that of in section c and d leads to the convergence to the “High” point.)
Adapted from (Alon, 2019)

In another situation, where the synthesis and degradation curve are positioned in another way, there are only one equilibrium point; the halt of the other state of the system is accomplished by the depletion of raw materials or energy. 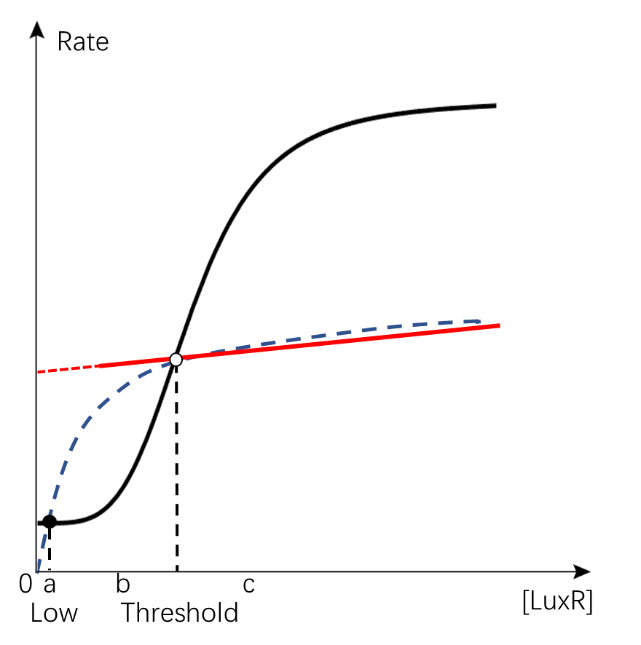 (Figure 10. The other variant of curves of the two core reactions of the bistable system. The threshold is denoted by a white dot; the intersection of the two curves denoted by a black dot is the lower equilibrium point. The x-axis was divided into 3 sections. Initial input of LuxR concentration in section a and b results in the convergence to the “Low” point, while that of in section c leads to high expression of eGFP until it reaches the system’s limit, as the imaginary “high” point.)

The fluorescence intensity is therefore used to represent a semi-quantitative signal, of whether the number of bacteria is larger than the national standard, with the help of signal modulation to place the threshold at the right LuxR concentration indicating the standard: if the input LuxR indicates a larger number of bacteria than the standard, the system will give an observable green fluorescence signal; if else, the lower equilibrium will display no observable fluorescence by naked eyes.

In our design, to minimize the negative effect to human health and cause minimal ecological impact, we decided to insert our exogenous gene into T4 genome by the disruption of gp23 or gp24. Gp23 and gp24 are both essential proteins to assemble phage head. The disruption of these proteins is detrimental to assemble the phage progeny. Thus, our phage will not produce offspring thus posing little risk to nature and humans (more descriptions in Safety parts). To produce such phage, we decided to use the CRISPR/Cas9 system and we will also provide gp24 or gp23 gene on the plasmid of pCas9 for complement so that a complete phage can still be produced. We can overcome the cutting of CRISPR/Cas9 complex of pCas9 plasmid by codon optimization for gp24 on the plasmid. The detailed description is delineated in figure 2. 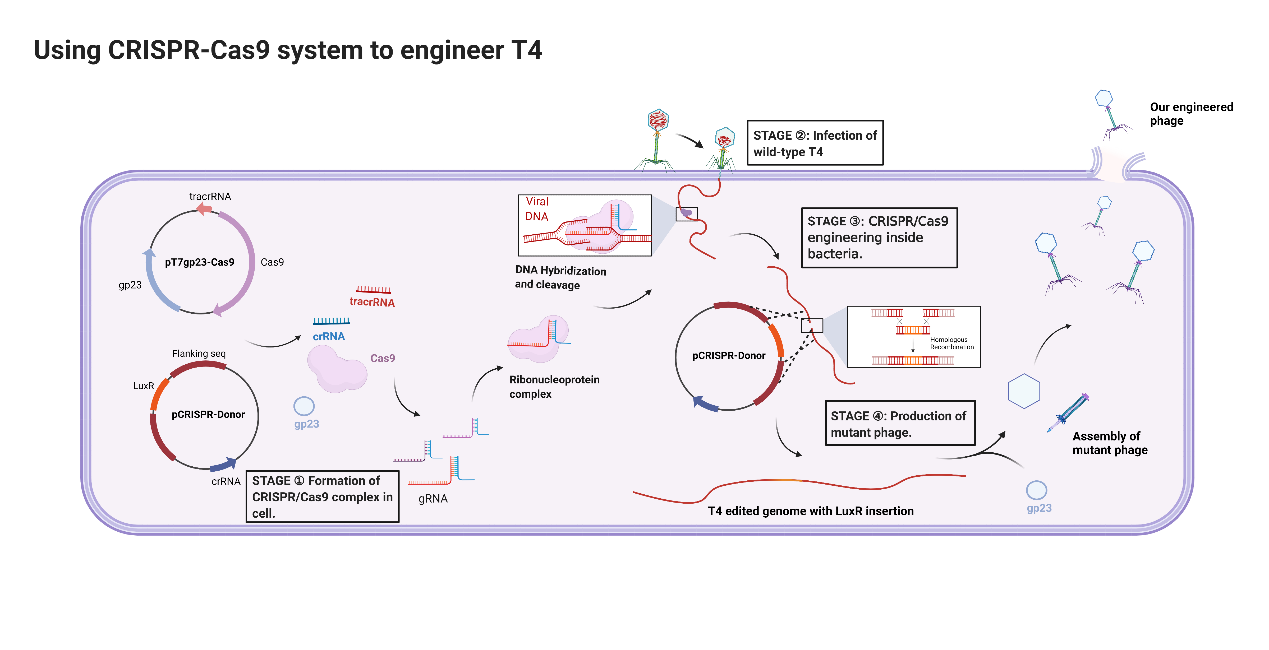 (Figure 11. The mechanism of engineering T4 phage by CRISPR/Cas9. Created with BioRender.com)