The goal of our project is to create a drug screen model for Alzheimer’s diseases and do some potential drug testing. We used full length Human APP 596 gene, which is thought to be the main cause of AD, and applied it on Drosophila. We will conduct a series of drosophila behavioral experiment to test if the creation of drug screen model on drosophila is successful. Lastly, we will examine the effect of Chloroquine as a potential medicine to inhibit the symptoms of AD.


In brief, our experiment design can be separated into three parts.
-Using molecular biology to construct the UAS-APP-Myc plasmid, and make transgenic flies bearing the UAS-APP-Myc transgene in the fly genome.
-Expressing APP-Myc in Drosophila nervous system by the Gal4/UAS binary system, and conduct behavioral experiment to test the AD model.
-With the established fly AD model, a potential drug is test for its effect on AD-like symptoms.

Why we chose Amyloid cascade Hypothesis:

Since Kang cloned the cDNA of Amyloid Precursor Protein for the first time in 1987, APP has become a research hotspot. The following research of APP has proved that its abnormal expression and metabolism are closely related to the pathogenesis of AD [1].

Why do we transfer whole APP gene?

Since no effective drug has been developed to reverse the disease in the study of the Aβ gene, we believe that there are undiscovered disease-causing genes in the whole APP. We transfer whole APP gene into drosophila and trying to restore an entire Alzheimer’s individual.


Biobrick design and plasmid we used.

Figure 2 shows a diagram of the plasmid we have used for experiment. The reason why we use this plasmid is because we are using the UAS/Gal4 binary system to drive APP expression in fly nervous system. 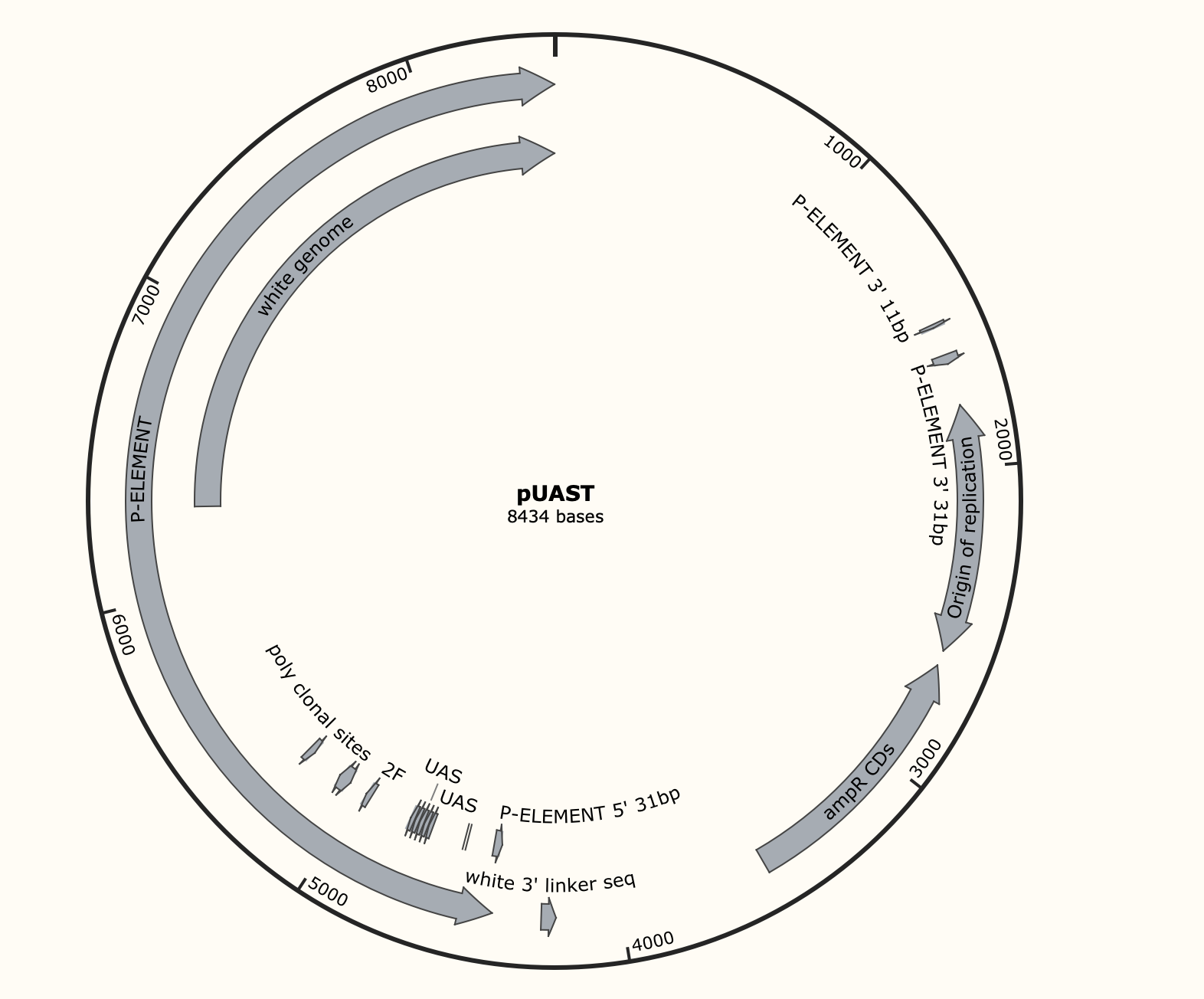 Figure 2 Diagram of the pUAST plasmid.


When crossing a UAS-APP-Myc fly with the Appl-Gal4 fly, Gal4 protein will be expressed in the nervous system driven by the Appl promoter. Then Gal4, as a transcriptional activator, will bind to UAS and activate APP expression.

Drosophila, being a common model organism, has been widely used in biomedical research. It possesses a short, simple reproduction cycle that is low cost when run. On the other hand, drosophila have a well-established researched background, with multiple Nobel winning findings. Nearly 80% of human genes have homologs in Drosophila, and Drosophila has been used as animal models for many human diseases, including cancers and neurodegenerative diseases. 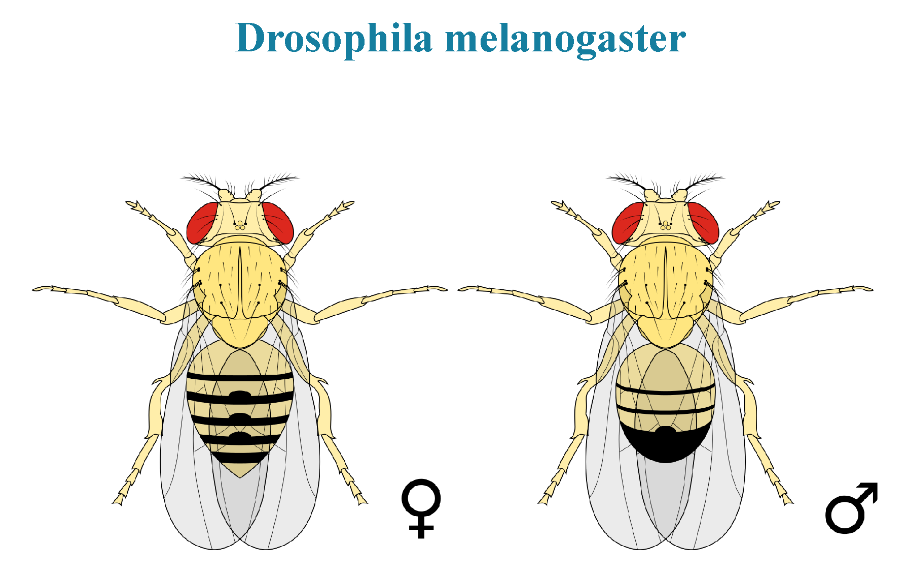 
The first goal for us is to express human APP gene in Drosophila. For this process, we first need to construct the UAS-APP-Myc plasmid, transform it to the Bacteria E. coli for amplification, then extract the plasmid, send the plasmid to a firm for microinjection. After receiving microinjected flies, we will screen and identify the UAS-APP-Myc transgenic flies by the eye color. Embryos from white eye flies were injected, and transgenic flies carrying UAS-APP-Myc will show orange eye, because a mini-white gene was included into the plasmid.


In our design, we thought of using Drosophila to create a model for Alzheimer’s Disease medicine testing. Human Alzheimer Disease (AD) is known to have its causes related to plaques of amyloid-beta peptides that are made by cleavage of Amyloid Precursor Protein. Previous research has established fly AD models by expressing the amyloid-beta peptide (Aβ), however, recent studies suggest that Aβ is not the only cause of AD, other parts of APP, like AICD (APP intracellular domain), are also involved in AD. For this reason, we decided to express full length APP in the fly nervous system.

Experiment 1: pupation height: in this experiment, we use Appl-Gal4 to drive APP expression in all larval neurons. 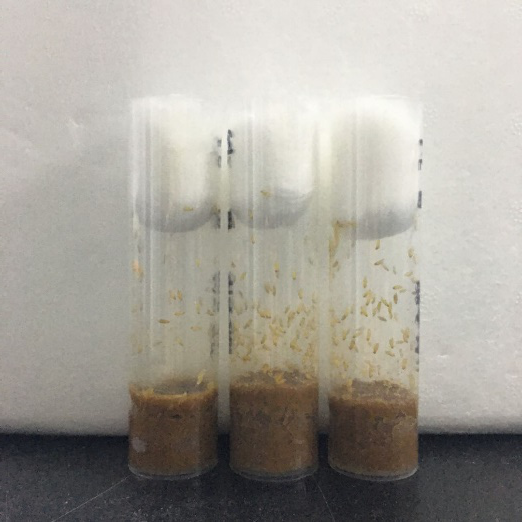 
Male will be rejected by the non-virgin female in courtship. So, control (wild-type) males will learn from the rejection experience, and show significantly reduced courtship in the final 10 min, compared with the first 10 min. We expect to see APP-expressing flies shown no difference between the final and first 10 min, suggesting a learning and memory defect.

As aberrant autophagy is frequently observed in the brain of AD patients, suggesting autophagy is likely a cause of AD, yet, this has not been investigated previously.

As aberrant autophagy will lead to cell death, which is also referred to as autophagy-mediated cell death. In this experiment, we will use Appl-Gal4 and GMR-Gal4 to drive APP expression in larval VNC and photoreceptor cells of eye disc, respectively.

Since we found that APP expression in fly nervous system causes autophagy-mediated neuronal cell death and multiple behavioral defects, including decreased pupation height, reduced learning and memory, and impaired courtship choice ability. We wonder whether these behavioral defects are the outcome of APP-induced autophagy-mediated neuronal cell death. To address this possibility, we decided to test the therapeutic effect of chloroquine on APP-induced AD-like symptoms in Drosophila, since chloroquine is a well-known inhibitor of autophagy.