Alzheimer’s disease (AD), since it was proposed in 1906[1], has left human beings helpless. Some of us have seen or heard the word "AD" from relatives or friends. We understand the pain of watching loved ones from staggering to forgetting, and we are afraid to face the parents who have forgotten us. Until now, however, the existing drugs can only effectively alleviate the disease, but not reverse the disease. Meanwhile, the number of patients of AD is increasing. We urgently need new drugs to fight against AD. Therefore, what we are doing is to create a new drug screening model for scientific research workers.

1. What is Alzheimer’s Disease?

Alzheimer’s disease is a neurodegenerative disease that usually starts slowly and progressively worsens, proposed by Alois Alzheimer in 1906. AD patients were divided into early, middle and late stages according to time. Meanwhile, patients will lose their memory, mobility, cognitive and learning abilities [1].
In the U.S., the incidence of AD among people 65 years of age and older is 11.3%. The death rate of AD in 2019 is 37 per 100,000 people. It is predicted that the number of patients will double in the following 40 years [2]. Alzheimer's disease has surpassed cancer to become the most terrible disease.

Figure 2 The proportion of Chinese patients with Alzheimer's disease in the world [4].

There are many genetic hypotheses of the cause of AD like “Cholinergic hypothesis”, “Tau hypothesis”, “Inflammatory hypothesis”, and “Amyloid Cascade Hypothesis”. Some experiments also point out external factors like brain damage, life pressure, blood disease etc. will lead to AD [1].
Among them, our team is concerned about the amyloid cascade hypothesis. It states that the deposition of amyloid-β peptide is important to the formation of Alzheimer’s Disease. Gene APP is located on chromosome 21 and contains 18 exons spanning 290 kilobases [5]. Three major isoforms arise from alternative splicing. They are APP 695, APP 751 and APP770. Under the sequential cleavages of β-secretase and γ-secretase, APP is generating to small peptides called Aβ. The over-production of Aβ leads to the formation of intraneuronal fibrillary tangles and cause the loss of neuron in that brain area[6].

As we known, AD patients can be divided into three phases: pre-stage, middle-stage and late-stage. Different treatments will be used to treat patients with different stages. Drugs remain the primary treatment, even though several new ways of treatment including immunization therapy, drug therapies, cognitive training, physical activity and treatments for cardiovascular disease and diabetes is having clinical trails[7]. 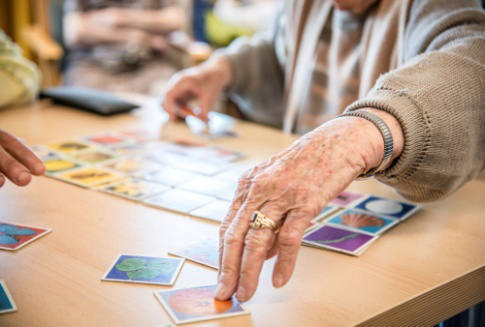 Cholinesterase inhibitors like galantamine, rivastigmine, and donepezil will be used to reduce the cognitive and behavior symptoms. However, the cholinesterase inhibitors will finally lose its effect because of the less production of acetylcholine [7].
Disease-modifying drugs. Aducanumab is the only disease-modifying drug approved in clinical treatment. Aducanumab is a human antibody, or immunotherapy, and it aims to reduce Aβ plaques. But at present, its effectiveness is still being tested, and the usage specification is also very strict [7].

N-methyl D-aspartate (NMDA) antagonist like memantine can be used to relieve symptoms in moderate to severe patients. It is believed to work by regulating glutamate. Donepezil, the rivastigmine patch, and a combination medication of memantine and donepezil are also allowed to severe patients. However, it has been reported that overproduction of glutamate may cause brain cell death[7].


The 2019 survey report by the Alzheimer's Disease Branch of the Chinese Geriatric Health Association (ADC) indicated that 90%, 60%, and 20% of Alzheimer’s patients stopped taking medications because of the ineffective treatment, obvious side effects, and concerns that long-term medication might affect their health (Figure 5). Furthermore, 91.52% of respondents are looking forward to more effective Alzheimer's therapy drugs. Thus, it is urgent and essential to screen effective medicines for AD [4].

Existing Model
·Transgenic mice Model
The currently available transgenic rat models recapitulate some, but not all aspects of AD. For example, APP transgenic mice initially occurred the accumulation of intracellular Aβ and occasional behavior deficits. However, the deposition of plague for transgenic mice is very long, and it seldom present with NFTs and neuronal loss[9].

·Non-transgenic animal model
Natural AD models: These aged animal models are valuable tools that may be used to reveal the natural pathophysiology of AD, since they are non-invasive and without any neurochemical manipulations. But these types of models have high cost and are difficult to experiment in batch [9].

·Intervention Model
The intervention model was established to explore the role of one specific neurotransmitter pathway in AD pathophysiology, and in particular to test the cholinergic hypothesis of AD. The established models only represent some characteristics of AD, such as deficits in cholinergic function and learning impairments.

·In vitro model
In vitro models of AD include tissue models, cell models, and Molecular simulation models, provide a prompt and direct manner with which to reveal the pathological changes occurring in AD and also to study the responses of nerve cells to treatments at molecular and cellular levels. The disadvantage is that it is impossible to test the effectiveness of the drug on the entire individual[9].

·Current Drosophila Model
Drosophila has advantages such as numerous samples, short growth cycle and strong homology with human. Therefore, in the resaech of AD, drosophila was set as model organism. It has been used to test the toxity of Aβ 42 and tau[10].

Our project -- Drosophila Model
In summary, some drug screening models have problems such as long growth cycles and difficulty in obtaining genetically modified animals, which greatly reduces the efficiency of drug screening. Based on this starting point, we intend to build an animal model with drosophila. Different from drosophila before, we are planning to transfer whole APP gene into drosophila. We will test the behavior of the drosophila from its pupae level, mobility, learning and memory, and cognitive abilities. Observation of cell apoptosis also gives us evidence to check the effectiveness of the drug. In the future, we hope we can develop a fast, simple and effective animal drug screening model, hoping to help the development of AD drugs.