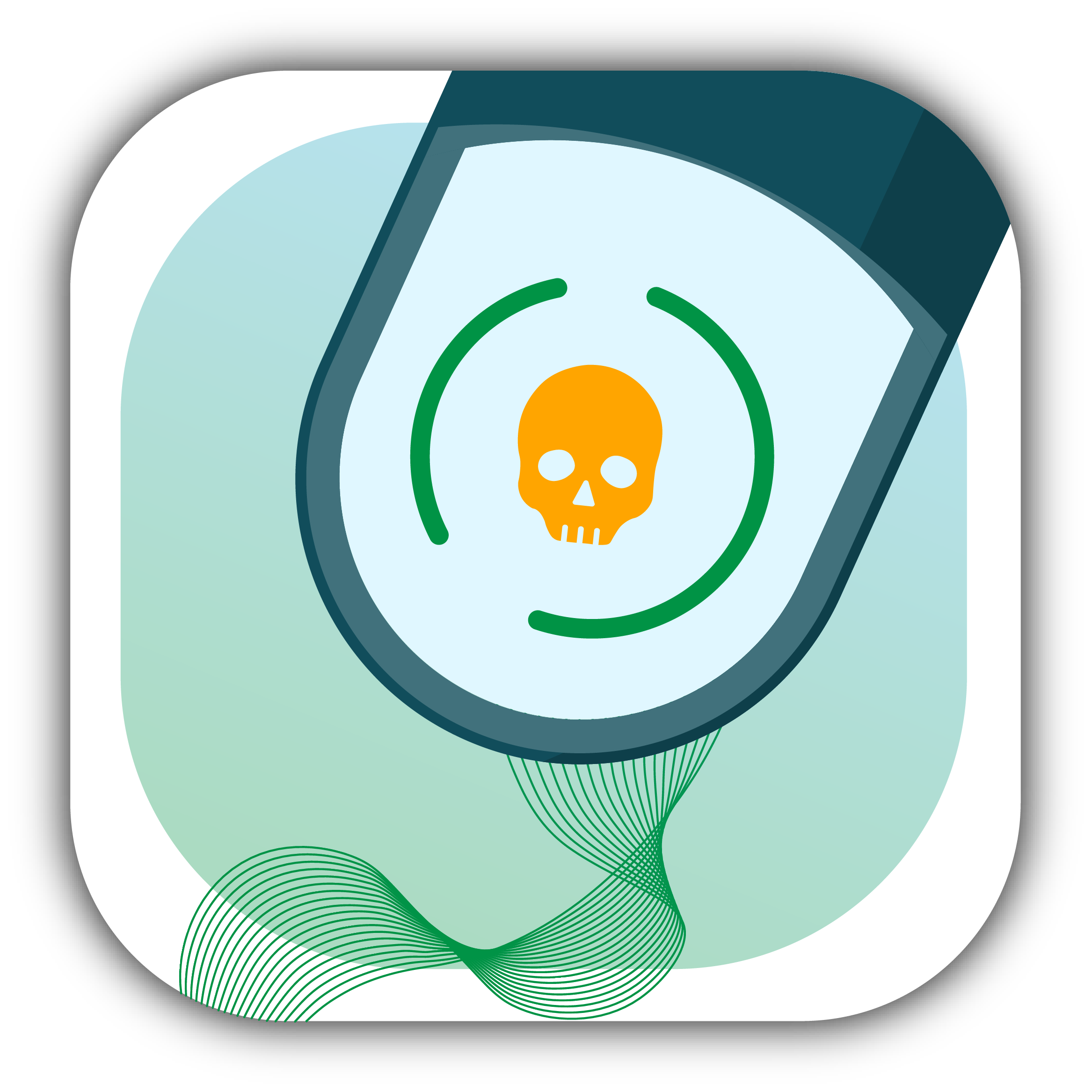 This project helps to ensure the biosafety of Cattlelyst by making the survival of the engineered methanotroph E. coli dependent on the higher methane concentration inside the biofilter. This is achieved by constructing a genetic circuit that senses the intracellular formaldehyde concentration, a direct intermediate of methane metabolism, and serves as a conditional kill switch by means of the hok/sok toxin-antitoxin system. Should the bacterium escape the biofilter, where the methane concentration is lower, toxin production is activated, thereby killing the cells. This genetic circuit is designed as a plasmid, to be expressed in E. coli. To enable increasing the formaldehyde sensitivity of the system, toxicity tests are performed on several strains containing knock-outs of detoxification genes.

This project is the first of the three safety systems to ensure that our engineered bacteria cannot escape the biofilter alive. It creates a conditional kill switch in the synthetic methanotroph E. coli that relies on the methane concentration present, which is higher inside the biofilter than outside. This ‘kill switch’ is a genetic circuit that responds to an intracellular input signal to generate two steady-state outputs: cell survival and death.

Here, we make use of the the hok/sok toxin-antitoxin system [1], which relies on the transcription of the long-lived Hok RNA, which encodes the toxic Hok (host killing) protein. The Hok killing mechanism is regulated by a small antisense RNA, sok (suppression of killing), that binds Hok RNA and prevents its translation [2]. When exceeding an intracellular hok/sok ratio of 6000, the Hok protein kills the cell by disrupting its membrane structure [3]. Therefore, only cells that ongoingly possess the hok/sok system survive [4].

To make cell survival dependent on the methane concentration in the biofilter, the hok/sok system is coupled to a methane-sensing module. In both native and synthetic methanotrophs, methane assimilation proceeds via the intermediate formaldehyde (CH2O) [5, 6], a highly (geno)toxic molecule [7]. In wild-type E. coli, formaldehyde is rapidly detoxified by the FrmRAB operon (Figure 1), consisting of the detoxification genes frmA and frmB and the regulator frmR. In the absence of formaldehyde, FrmR binds to the operator of the frm promoter (Pfrm), inhibiting the transcription of the frmA and frmB genes. When formaldehyde is present, it associates with FrmR, hence repression is lifted and the produced FrmA and FrmB catabolize this toxic compound [8]. This protein presents a sensing system that can detect levels as low as 1 μM of formaldehyde [9, 10]. Two other formaldehyde detoxification pathways are known in wild type E. coli [11, 12].

Figure 1: Mechanism of the E. coli FrmRAB operon that senses the presence of intracellular formaldehyde. A) Without formaldehyde, FrmR binds Pfrm and transcription is repressed. B) If formaldehyde is present, repression is lifted and the frmR, A and B genes are produced, of which the latter two rapidly break down formaldehyde. Figure adapted from [5].

The repressing signal of free FrmR in low formaldehyde and thus low methane concentrations is converted to a positive regulation of toxin production by incorporating LacI, a transcriptional repressor for its own promoter (Plac) [13, 14]. To incorporate the “double input” mechanism of both methane concentration and cell density that is desired for toxin production, the transcription of hok is placed under the hybrid promoter Plux/lac [15]. This promoter contains operator sites for both LacI and LuxR proteins, rendering transcription possible only if the expression of lacI is not repressed and the expression of luxR is induced.

The coupling of the FrmR formaldehyde sensor to the hok/sok toxin-antitoxin system by means of LacI creates the following genetic circuit that serves as a conditional ‘kill switch’ in E. coli (Figure 2).

Figure  2: In low methane concentrations outside of the biofilter, free FrmR represses Pfrm. This leads to repression of antitoxin production and toxin production, as lacI repression is lifted. This kills the cells.

The genetic circuit is expressed from a low copy number plasmid in E. coli. This project aims to construct this plasmid and test its dynamics in vivo in the formaldehyde concentrations of the biofilter, based on the previously constructed model. The plasmid is in total composed of 10 separate elements, that can be divided into 5 “modules” (Figure 4): 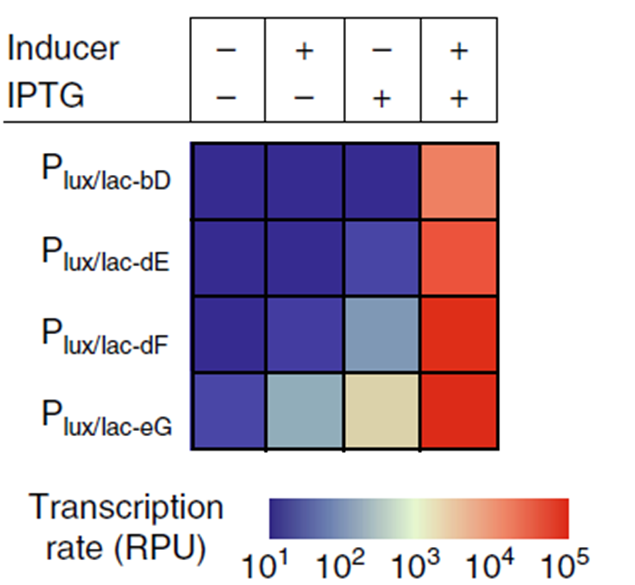 Figure 3: Transcriptional dynamics of the dE and dF Plux/lac promoters [13]. 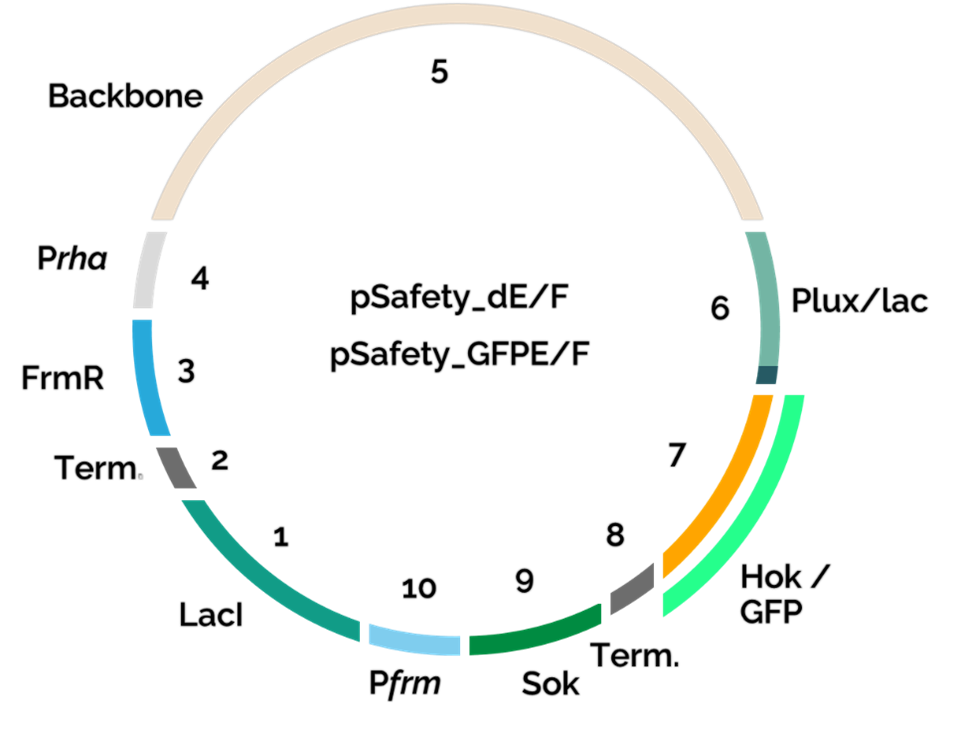 Figure 4: Schematic overview of the genetic circuit on the pSafety, containing either the hok or sfgfp gene, and the two hybrid promoters dE and dF.

Table 1: Origin of DNA sequences of the 10 fragments of the pSafety plasmids.

In parallel, the toxicity of formaldehyde on several E. coli strains was examined via growth experiments. Both a knock-out of the frmR gene and the whole FrmRAB operon were tested and compared to their wild-type counterparts. Moreover, the synthetic methanotroph E. coli strain SM1 was tested, which is also a knock-out for frmA, but redirects formaldehyde into the RuMP pathway for its growth instead [6]. An overview of the strains used is presented in Table 2.

At day 1, all strains were grown overnight (37°C, 200 rpm) in 10 mL LB, supplemented if necessary with 30  μg/ml chloramphenicol. At day 2, the cultures were diluted to an OD600 of 0.1, and inoculated in LB supplemented with variable concentrations of formaldehyde (0  μM, 100  μM, 250  μM, 500  μM, and 1mM) in a 96-well plate. Incubation was performed at 37 °C in the Synergy MX plate reader for 16 hours. For the SM1 stain, incubation was extended until 48 hours under the same conditions. For each strain, two biological and two technical replicates were performed. Finally, the growth rate of each strain was calculated in every condition in order to observe its tolerance to different formaldehyde concentrations.

Construction of the circuit

Due to cloning difficulties and time constraints, none of the four complete plasmids was constructed in the available time. Therefore, the dynamics of the system could not be tested.

The growth rates obtained from the growth experiments are presented in Figure 5. In all cases, bacterial growth was inversely proportional to the concentration of formaldehyde, indicating their sensitivity to its toxic effect [12]. The wild-type strains BW25113 and SIJ488, which both originate from the parent strain MG1655, display similar growth rate dynamics upon increasing formaldehyde concentration. In the absence of formaldehyde, the BW25113 strain grows at a higher rate than the SIJ288 strain, a phenomenon also previously observed when grown in glucose minimal medium [21]. Compared to its parent strain BW25113, the %Delta;FrmR knockout strain also exhibits similar growth dynamics, as lack of regulation on the FrmRAB operon means the detoxification genes frmA and frmB can likely still be expressed. This changes when the whole FrmRAB operon, including the detoxification genes, is knocked out. In the absence of formaldehyde, the SIJ488 %Delta;FrmRAB strain grows faster than its parent strain, probably due to the additional deletion of the lipoamide dehydrogenase (lpd) gene. Intriguingly, the SIJ488 ΔFrmRAB strain shows higher sensitivity to formaldehyde (up to 500  μM) compared to the wild-type and the ΔFrmR strains, which are still able to tolerate these conditions, as they express the frmA and frmB detoxification genes. This is consistent with literature, where concentrations up to at least 750  %mu;M are reported to be tolerated by E. coli strains with intact frmA and frmB genes [22, 23]. 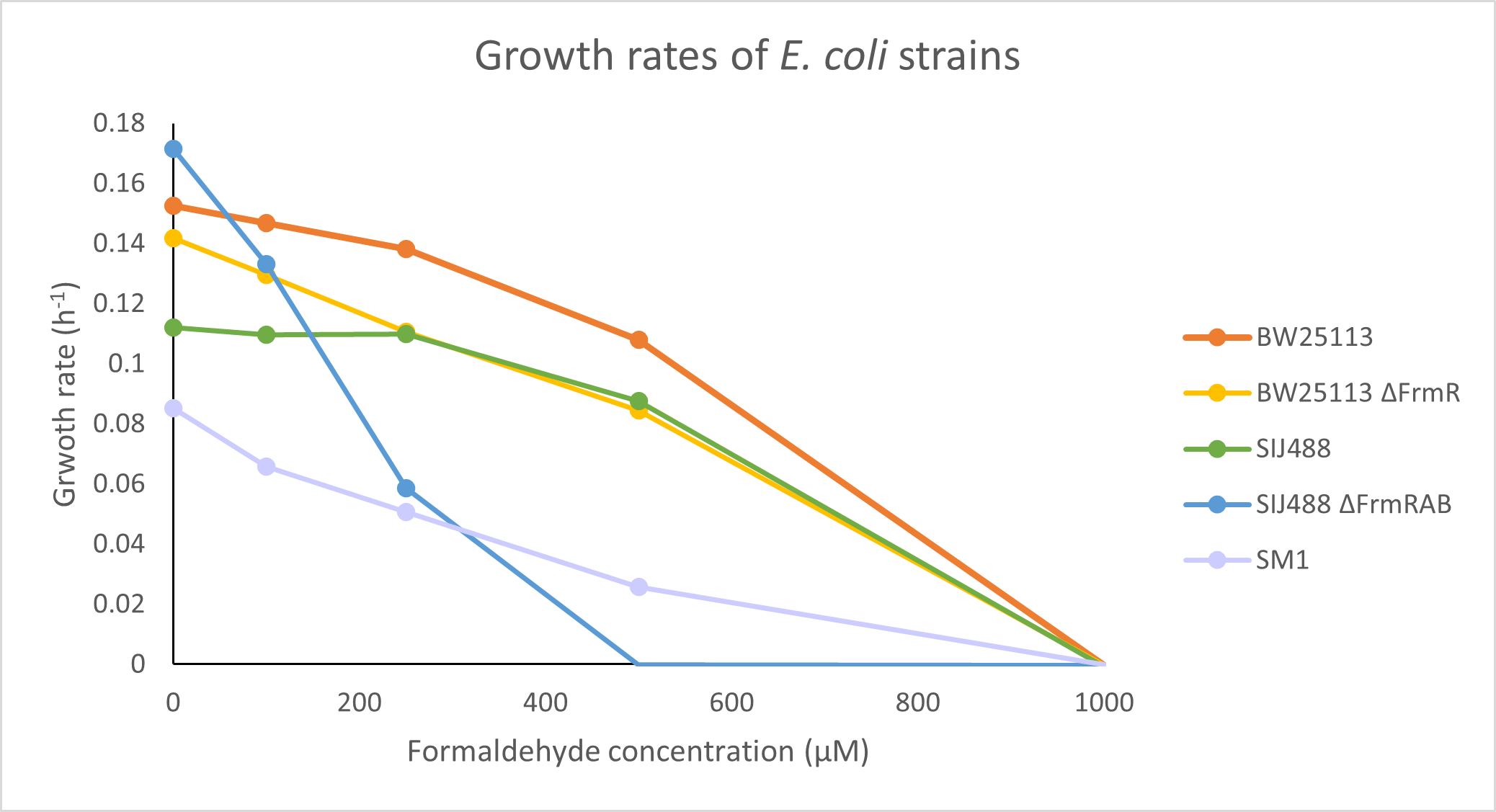 This is advantageous in the context of the Cattlelyst project, as the modelling of this system showed that the sensitivity to formaldehyde needed to be increased to show the desired dynamics in the lower methane concentrations cow stall conditions. However, the eventual Cattlelyst organism would be a methane monooxygenase (MMO)-expressing variant of the synthetic methylotroph SM1, which would then be able to grow solely on methane. Therefore, the increased formaldehyde sensitivity would need to be present in this strain as well for the kill switch to function as desired.

Measured growth rates of the SM1 strain on LB are almost half of the other tested strains, likely because of its large number of genetic alternations (insertion of two operons and disruption of 18 genes) [6]. Formaldehyde sensitivity of the SM1 strain seems to display a similar pattern as the BW25113 ΔFrmR strain, with an increased sensitivity and longer lag phase, but retaining its ability to grow at 500  μM formaldehyde. This might be attributed to the fact that although the SM1 is a ΔFrmA strain, formaldehyde is redirected into the RuMP pathway for growth, presenting an alternative ‘detoxification pathway’. Therefore, sensitivity to formaldehyde is not increased in the SM1 strain compared to its wild type, which means that other methods are required to increase formaldehyde sensitivity of the synthetic methanotroph in order to achieve the cell survival and death in the methane concentrations present in the biofilter.

In order to overcome this limitation, the other naturally existing formaldehyde detoxification pathways of E. coli can be knocked-out to increase sensitivity [11, 12], even though the FrmRAB operon shows the greatest effect on formaldehyde degradation [12]. In addition, the induction of the FrmR protein by Prha could be tuned, to more tightly control the free FrmR pool inside the cell, which could also increase the sensitivity of the system. The extensions to the circuit suggested by the previously constructed model may also be incorporated. Experiments are needed to test the dynamics of the system and validate these approaches. Lastly, the growth experiment of the SM1 strain needs to be repeated to obtain results in its full methanol-growing state. In ideal conditions, the SM1 strain expressing an MMO enzyme, thereby growing fully on methane, can be tested to obtain information on the eventual dynamics in the biofilter.

Due to cloning difficulties and time constraints, the plasmid with the complete circuit was not obtained. Growth experiments with formaldehyde concentrations up to 1 mM showed that the sensitivity of E. coli SIJ488 ΔFrmRAB, lacking its detoxification machinery, to formaldehyde is increased. This could lead to improved sensitivity of the system, aiding the practical implementation in the low methane concentrations of the cow stall. However, this is not observed for the SM1 strain that is intended to be used in the biofilter, so other methods need to be explored to increase formaldehyde sensitivity of this strain.