In Cattlelyst, we have engineered a number of metabolic pathways to alter the behaviour of Escherichia coli and Pseudomonas putida. This required a lot of research, however wouldn't it be nice to design your Genetically Engineered Machine with just a few clicks? That’s why the Cattlelyst team worked on a program that does all the work for you.

The iGEM Pipeline for Improved Pathway Engineering, the iGEM PIPE is a Python package that offers tools to explore the engineering strategies to make a chassis organism able to grow on atypical carbon sources (e.g. pollutants such as methane) and produce targets (e.g. high-value compounds). The goal of the iGEM PIPE is to suggest the most favourable engineering strategy to obtain strains that are optimal for both bioremediation and bio-production purposes. This tool was built to facilitate the transition between the computational design and the validation of the strategies in vivo. For this purpose a wikibase of standardised biological parts was connected to the PIPE, which is thereby able to suggest the Biobricks that have to be introduced into the chassis for reproducing the designed pathway. Additionally, a variant of a codon harmonisation algorithm has been implemented in the iGEM PIPE with the purpose of generating codon-harmonised restriction site-free Biobrick sequences.

In this page you can find answers to questions such as:

We provided a manual and a list of tutorials to help the users in getting started with this Python package and guide them step-by-step through the main functionalities. The tutorials have been validated by other iGEM teams, the Groningen and Maastricht iGEM teams 2021. We are very grateful to them, since they helped us pointing out bugs and making the installation simpler.

The iGEM PIPE was developed while working on an original engineering objective: the development of a strain of E. coli utilising methane as the sole carbon source and producing L-lactate. We validated the PIPE by using it for the identification of engineering designs in three test cases on the models of two organisms: E. coli and P. putida. Additionally, the PIPE has been used for the identification of possible engineering strategies for establishing auxotrophic co-dependency between the same two microorganisms. This should give you an idea of its relevance for the Cattlelyst project. In our case, we asked the PIPE to suggest how to alter the metabolism of the two bacteria to make them produce an amino acid which the other organism is auxotrophic for.

If you want to know more about the test case and validation and how we made use of the iGEM PIPE in our project follow the links below.

Why is the iGEM PIPE needed?

Biotechnology is particularly suited for targeting two societal needs: the degradation of pollutants and the production of commercially relevant chemicals. Microorganisms have great potential for the completion of both tasks [1], [2]. Their natural variability is harnessed by means of metabolic engineering and synthetic biology with the aim of creating strains with improved phenotypes for bio-degradation/production [3],[4]. Currently, numerous tools are available for the in silico design of microorganisms producing compounds relevant for industry [5], [6]. Nonetheless, few tools exists for the identification of organism-specific strategies for strains to be used in bioremediation. Tools that suggest designs involving both addition and deletion of reactions exist only in the context of improved (growth coupled) production. Thus one of the novel aspects of the PIPE of WUR iGEM team 2021 is the suggestion of engineering strategies allowing growth of genome scale metabolic models on uncommon substrates (e.g. pollutants and xenobiotics).

Additionally, this Python package aims at facilitating the transition from in silico design of the engineering strategy to application in vivo of a microorganism in the laboratory. The transition usually consists in using biological parts, Biobricks, to confer the new functionalities (e.g. gene knock-ins) and other molecular techniques to knock-out other genes. The identification of the Biobrick that matches the reactions that the iGEM PIPE suggests could be a time consuming task to do manually, this is why the PIPE automated this search, by making use of a new version of the Biobrick database, the Biobrick wikibase.

Biobricks can encode for proteins or other regulatory elements such as promoters. When they encode proteins, most of the times they encode for enzymes. However, successful expression of heterologous proteins in a host organism is not a trivial task [7]. Many aspects can hamper protein expression and cause misfolding, which ultimately results in the formation of inclusion bodies that affect cell growth [8]. Differences in codon usage frequencies between organism are often recognised as the cause of poor expression [8]. Hence, this strain design pipeline we present, not only includes the identification of the Biobricks within its workflow, but it also takes into consideration one of the most commonly used methods for the optimization of protein expression, codon harmonization. Functions of this Python package codon harmonizes the coding sequences of the Biobricks in order to have a higher change of successful expression the new host.

The PIPE has been made accessible to other iGEM teams during the final developmental stage and this collaboration have led to the resolution of several bugs and the easing of the installation procedure with all the required packages.

Read more about how they helped us impoving our tool in the Collaboration page!

The iGEM PIPE is a Python package that has been developed on the basis of CobraPy package, thus the user should be familiar with the principles of constraint-based analysis. Given the absence of a graphic user interface, the user should ideally have some basic knowledge of coding in Python. This basic knowledge facilitates the usage of the functions of the PIPE independently. To guide the users in getting familiar with this Python package we created tutorials in the form of Jupyter notebooks. The Jupyter notebooks are available at the GitLab repository of our Cattlelyst project. Follow this link to go to the repository of the PIPE in our WUR iGEM 2021 GitHub page.


Some useful links that we used ourselves to familiarize with the mentioned platform are given below:

The functionalities of the iGEM PIPE are performed in a series of steps that the program follows one after the other. Here is a brief explanation of these steps, that explain how the PIPE is able to perform its functions. 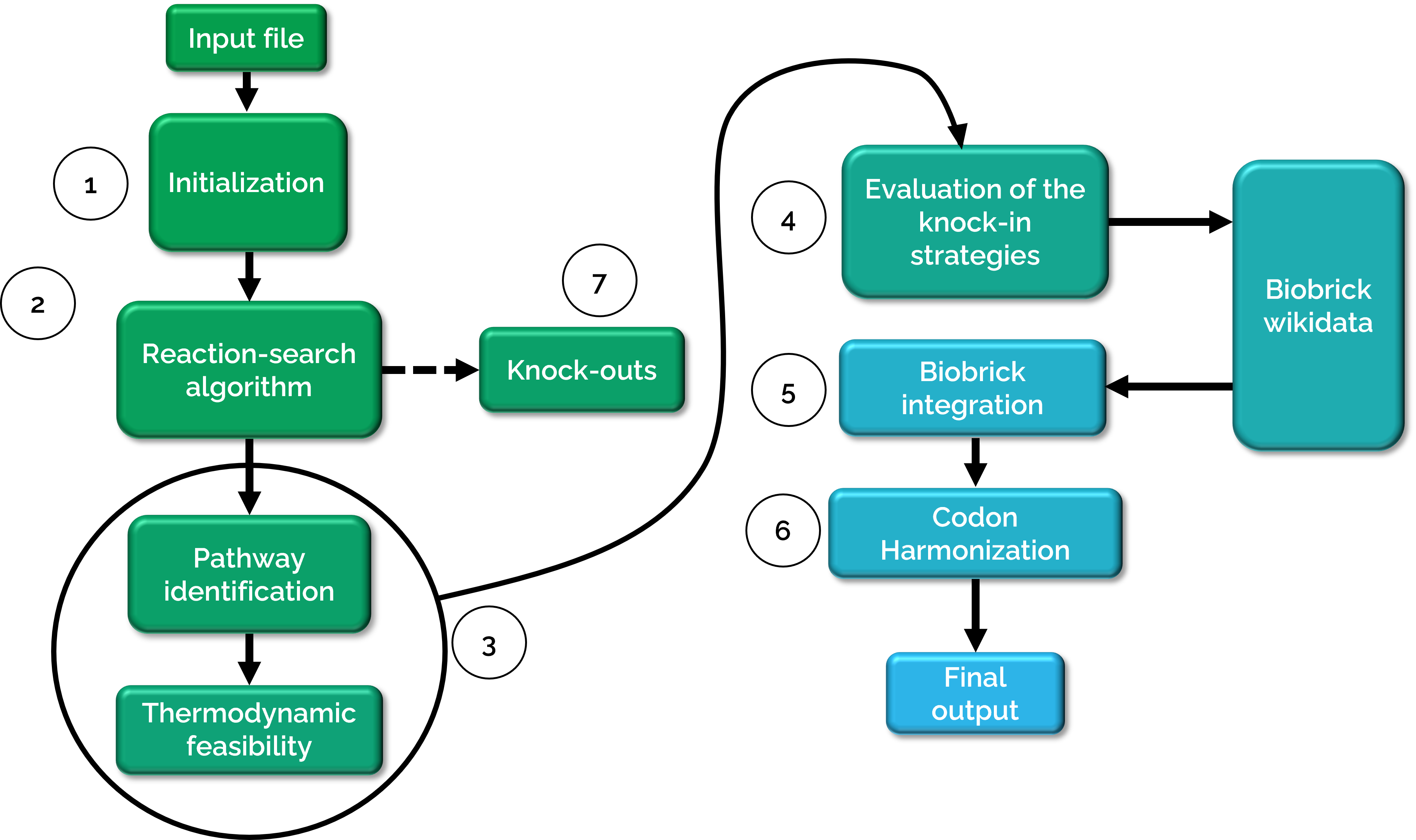 Figure 1: The flowchart consists of seven steps: 1) Initialization; 2) Reaction search within a database using the Gapfilling algorithm [9], [10] 3) Pathway definition and thermodynamic feasibility assessment; 4) Comparison of the metabolic engineering strategies involving reaction knock-ins; 5) Query of the Biobrick wikibase to find biological parts matching the added reactions; 6) Codon harmonisation of the coding sequences from the Biobricks; 7) Optional identification of reaction knock-outs with the Optknock algorithm [11]. Each step is explained in detail in the following paragraphs.


Here is a simplified image is of the PIPE's set-up (Figure 1). The program uses models of organisms as input. Successively, it performs analyses for the addition and removal of reactions in order to reach the goal set by the user. In this way several design strategies are generated. The next steps involve the evaluation of the strategies and the identification of the Biobricks that have to be used to reproduce the engineering strategy in vivo. The output consists of comma separated values (CSV) files with the detailed information of the analyses and the suggested strategies.

The PIPE first uses flux balance analysis (FBA [9]) to check whether the model of the organism can grow on the indicated carbon source and produce the target. If the optimization is infeasible it does the following:

The results from the identification of knock-ins strategies and pathway evaluation are used to compare the model variants of knock-ins mutants among each other. The comparison criteria include:

The values of each model criterium were first normalised with formulas that return a number between 0 and 1, with 1 indicating the optimum and 0 indicating the worst among the models.


The normalised scores Si,j for criteria a-d for each variant are summed using an additive scoring function in which user-defined weights ranging from 0 to 1 are included. Equation 1 indicates that the sum of all criteria’s weights equals one:

where wj is the weight of criterion j. As show in equation 2, per each model the normalised scores Si,j are multiplied by wj and the weighted scores are summed up to obtain the final score Si :

The Biobricks suggested by the previously described module can encode genes from different organisms, therefore we suggest codon harmonization for improving gene expression in the host of choice. The tool named Codon Harmonizer has been implemented in the iGEM PIPE to provide codon harmonized versions of the coding sequences for the heterologous functions. The recent rewrite of the Codon Harmonizer tool [10] has been chosen for the implementation of codon harmonisation in the PIPE.

This algorithm minimises the parameter called codon harmonization index that evaluates the differences in codon frequencies between the expression host and the native organism. The lower the CHI the better. The codon harmonization algorithm implemented in the PIPE had an additional feature. Which is the elimination of restriction sites (RSs). This is done by adding a check step after the harmonisation of the sequence in which the algorithm looks for one RS at the time. When a match is found, it substitutes the first codon involved in the RS with a synonymous one that has the next best impact on the CHI.

Codon harmonization does not guarantee optimal expression, although by providing the sequence already harmonized we think to speed up the still necessary trial and error tests for cloning.

The iGEM PIPE can be called in a unique workflow from command line by calling the script "call_full_script_cmd.py". Alternatively, the functions that constitute the iGEM PIPE can be used from any Python IDE in combination to CobraPy package.


Have a look at the iGEM PIPE’s manual and make use of the tutorials 0 – 6 in the GitHub repository of the WUR iGEM project 2021 to get started.

This pipeline is packaged as a .whl file. It can be installed with pip.


The scripts that constitute the iGEM PIPE can be accessed from the GitHub repository of Cattlelyst. Gurobi is used a solver for the PIPE, therefore, the Gurobi licence is necessary. A free academic licence can be made at this link. Only registration is necessary. The licence can be then saved in your PC following the procedure indicated at the website.