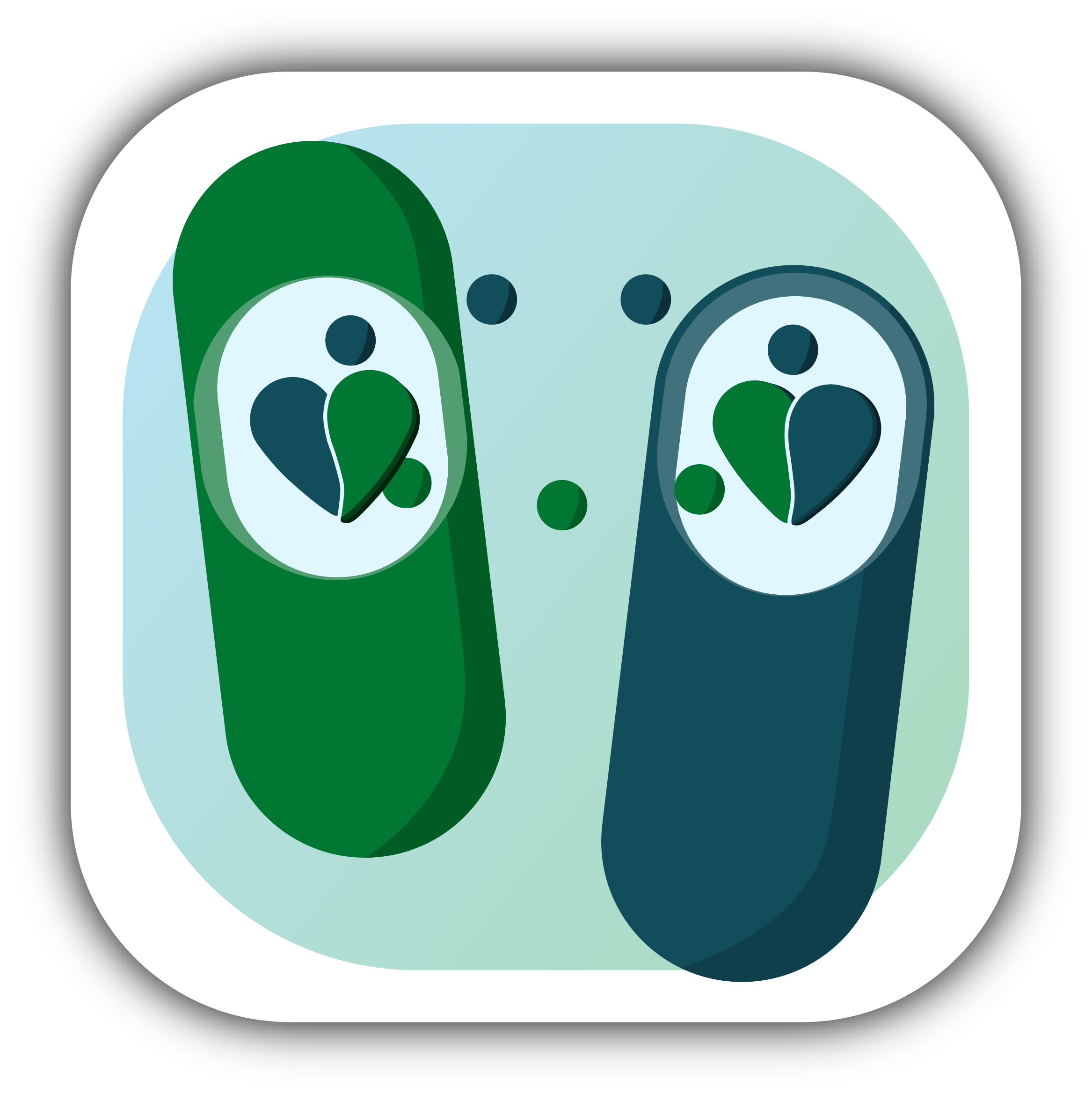 Due to its proximity to cattle, the safety of the Cattlelyst biofilter is extremely important. Complementing the two safety circuits designed to ensure the containment of the genetically modified bacteria in the biofilter, this study offered promising preliminary results regarding the establishment of a cross-feeding community of Escherichia coli and Pseudomonas putida, based on amino acids exchange and carbon-source dependency. Specifically, auxotrophic and overproducing strains for tryptophane and tyrosine were characterized, and carbon-source dependency was shown to play an important role in the maintenance of the ratio between the bacterial species during co-culture.

Cattlelyst aims at reducing the emission of both ammonia and methane from cattle stalls and is based on genetically modified bacteria able to efficiently metabolize ammonia and methane. Inside the biofilter, two synthetically engineered bacterial strains, a methanotroph and an ammoniatroph (bacterium able to metabolize ammonia) cooperate to purify the air. Due to the physical characteristics of the biofilter and its proximity to the surrounding natural environment, it is of utmost importance to guarantee the containment of the genetically modified bacterial strains used inside the biofilter. To answer this need, three complementary projects were carried out within the 2021 iGEM project. Specifically, two safety circuits – one based on the presence of methane and the other on a quorum sensing mechanism - were implemented inside the synthetically engineered bacterial strains. Nevertheless, in stressful conditions, the bacteria will be prone to mutate sequences essential for these circuits to operate and escape [1]. To complement the aforementioned measures, this project aimed at establishing a synthetic cross-feeding community of E. coli and P. putida based on amino acids exchange and on carbon-source dependency. This choice was based on the easiness to obtain auxotrophic strains for amino acids in laboratory conditions [2] and the fitness benefits that derive from the establishment of cross feeding communities based on amino acid auxotrophies [3], [4]. Codependency of E. coli and P. putida was designed to rely on the knock-out and overproduction of different amino acids in both bacteria. In this scenario, E. coli was knocked-out for amino acid 1 (AA1) and engineered to overproduce amino acid 2 (AA2), while P. putida was knocked-out for amino acid 2 (AA2) and modified to overproduce amino acid 1 (AA1)(i.e. cross-feeders) (Figure 1).

Carbon-source dependency was included to confer an additional layer of safety to the system. Here, P. putida was engineered to rely solely on E. coli for the carbon-source necessary to accumulate biomass (Figure 1). E. coli was shown to excrete acetate both during anaerobic and aerobic growth [5], and P. putida was proven to grow on acetate as sole carbon-source [6]. Thus, a P. putida strain not capable of using glucose as a carbon-source was used in this project. This strain presents a double knock-out for the operon gtsABCD (encoding the ATP-dependent ABC glucose transporter) and for the gene gcd (encoding the glucose dehydrogenase) [7]. The two knock-outs are reported to impede the uptake of glucose by preventing its transport through the inner membrane, mediated by the ABC transporter, and by blocking the peripheral oxidative route, which, through the action of Gcd, converts glucose to the intermediate D-gluconate. Altogether, the goal of this minor thesis project was to make E. coli and P. putida dependent on each other. The double auxotrophy and carbon-source dependency, together with the safety circuits, should ensure the containment of the genetically engineered bacteria inside the biofilter. 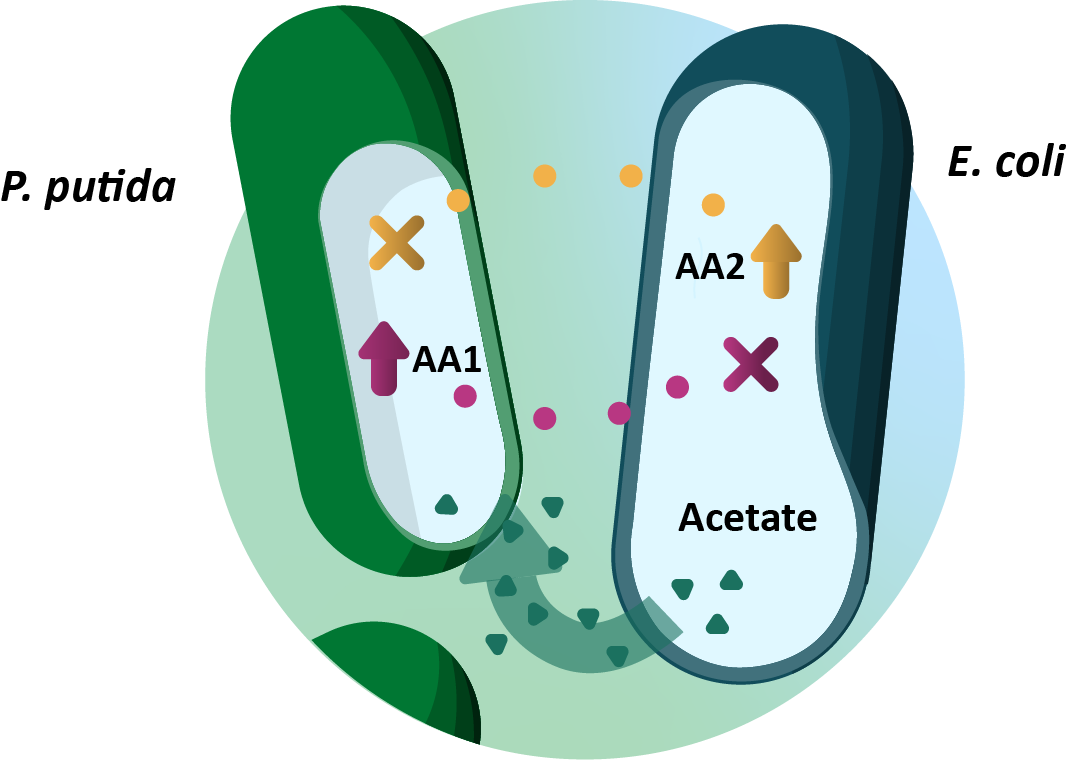 Figure 1: Cross-feeding community of E. coli and P. putida based on amino acid auxotrophy and carbon-source dependency. In this graphical representation, E. coli and P. putida are knocked-out respectively for amino acid 1 (AA1) and amino acid 2 (AA2) while overproducing the other amino acid. Auxotrophic and overproducing characteristics of the two bacteria make them cross-feeders. Co-culturing of the cross-feeders results in the reciprocal exchange of amino acids. In addition, E. coli is shown to secrete acetate, carbon-source on which P. putida can rely entirely for growth.

A literature study was initially performed to determine which amino acids represent the best candidates to establish co-dependency between E. coli and P. putida. The criteria that were taken into consideration are presented below. Based on these criteria a comprehensive table was compiled (Results section - Table 1) and the most promising amino acids were selected.

Following the preliminary literature study, the six most promising amino acids (leucine, lysine, arginine, tryptophan, tyrosine and histidine) were subjected to experimental analysis to determine which amino acids are needed in the lowest concentrations to re-establish wild type (WT) growth of the respective E. coli auxotrophic strain. Six E. coli strains belonging to the KEIO collection [8], auxotrophic for the most promising amino acids were incubated in a microplate reader with increasing concentrations of the required amino acids (ranging from 0.5 μM to 100 μM). Growth curves and doubling times of each strain were generated and analyzed.

Following growth curve analysis, Trp, Tyr, and His were selected as the most promising amino acids to establish a cross-feeding community of E. coli and P. putida. The cross-feeding behavior requires each strain to be auxotrophic for one amino acid while simultaneously overproducing the other amino acid. In this context, two approaches were tested to select the best overproduction strategy: general overproduction and targeted overproduction.

In this strategy, the knock-out of genes encoding for enzymes belonging to the TCA cycle - malate dehydrogenase (mdh) and phosphoenolpyruvate carboxylase (ppc) – was hypothesized to lead to the interruption of the cycle and the accumulation of intermediates of this pathway. This, in turn, was assumed to result in an increased production of a mixture of different amino acids deriving from the TCA cycle [3], that could sustain the growth of the partner auxotrophic strain.
In this strategy, the overproduction of the complementary amino acid was assumed to result from the elimination of the native feedback inhibition of the biosynthetic pathway of Trp, Tyr, and His.

E. coli overproducing strains belonging to the KEIO collection were tested for their ability to secrete amounts of amino acids high enough to sustain the growth of a biosensor strain auxo-trophic for the corresponding amino acid.

The creation of an auxotrophic P. putida strain for Tyr requires the knock-out of two genes: tyrA and phhAB [11]. The knock-outs in P. putida EM42 were performed via a two-step deletion method relying on the integrative vector pGNW and on homologous recombination.

2. Creation and characterization of overproducing strains

The knock-out of tyrR was performed in the mutant genomic background of E. coli ΔtrpD following the λ-red protocol.

The overproduction of Trp in P. putida EM42 was designed to rely on the construction of an overexpression vector harboring trpES40F. The S40F mutation was chosen to remove the feed-back inhibition that high concentrations of Trp would cause on the TrpE enzyme.

In parallel to the establishment of an amino acids codependency between E. coli and P. putida, a carbon-source dependency was engineered to confer an ulterior layer of safety to the system. In this context, E. coli - shown to natively excrete acetate during aerobic growth due to overflowing metabolism - was used as carbon donor, while P. putida – shown to be able to grow on acetate as sole carbon-source – was the carbon receiver. Specifically, P. putida EM42 Δgts Δgcd, a strain solely reliant on acetate for biomass generation was used in this project. In preparation for the co-culture experiment, the method for determining the relative abundance of the two strains in co-culture was validated. Following validation, co-cultures of the two strains were set up.

Overall, the amino acid needed in the lowest concentration to restore WT growth was Trp. The growth curves indicate that the addition of Trp – in the 25 μM to 50 μM range – to E. coli ΔtrpD would restore the final OD600 of the strain to values similar to the WT. Similarly, the addition of 50 μM of His almost reached the WT OD600 of E. coli ΔhisB, while the addition of 50 μM of Tyr to E. coli ΔtyrA restored more than half of the final OD600 reached by the WT. Despite exhibiting higher needed concentrations, Tyr was required in lower amounts than Leu, Lys, and Arg to restore the WT growth of the respective auxotrophic E. coli strains. Altogether, these results suggested that the amino acids that are needed in the lowest concentrations to re-establish WT growth in auxotrophic E. coli strains are Trp, His, and Tyr (Figure 3). These results are in accordance with the predictions obtained by PIPE. Specifically, PIPE was able to successfully predict that Arg is needed in higher concentrations than Trp to re-establish WT growth in E. coli auxotrophic strains.

Figure 4:  Graphical representation of the doubling times of each auxotrophic strain normalized for the WT. Two amino acids concentrations are represented 25 uM (A) and 50 uM (B). Each bar represents the normalized doubling time. The horizontal line indicates the WT value.

Following the choice of Trp, His, and Tyr, further analysis were carried out on the growth curves of E. coli ΔtrpD, E. coli ΔhisB¸ and E. coli ΔtyrA. Specifically, the OD600 of the auxotrophic strains was shown to increase proportionally to the increase in concentration of the respective amino acids added to the medium (Figure 5). The statistical significance of the positive linear correlation was tested by means of a Pearson correlation test (Trp r = 0.977, p value < 0.001; Tyr r = 0.983 p value < 0.001; His r = 0.986, p value < 0.001).

The creation of an auxotrophic P. putida EM42 strain for Tyr necessitates the knock-out of two genes: tyrA and phhAB. After following the knock-out protocol, colony PCR was performed. The band size of the mutated genotype was expected to be ~1290 bp for ΔphhAB and ~1360 bp for ΔtyrA, while the WT – used as a negative control - was expected to be ~3000 bp in both cases. Electrophoresis of the PCR amplification revealed the presence of two P. putida EM42 colonies knocked-out for phhAB and seven colonies knocked-out for tyrA (Figure 6). 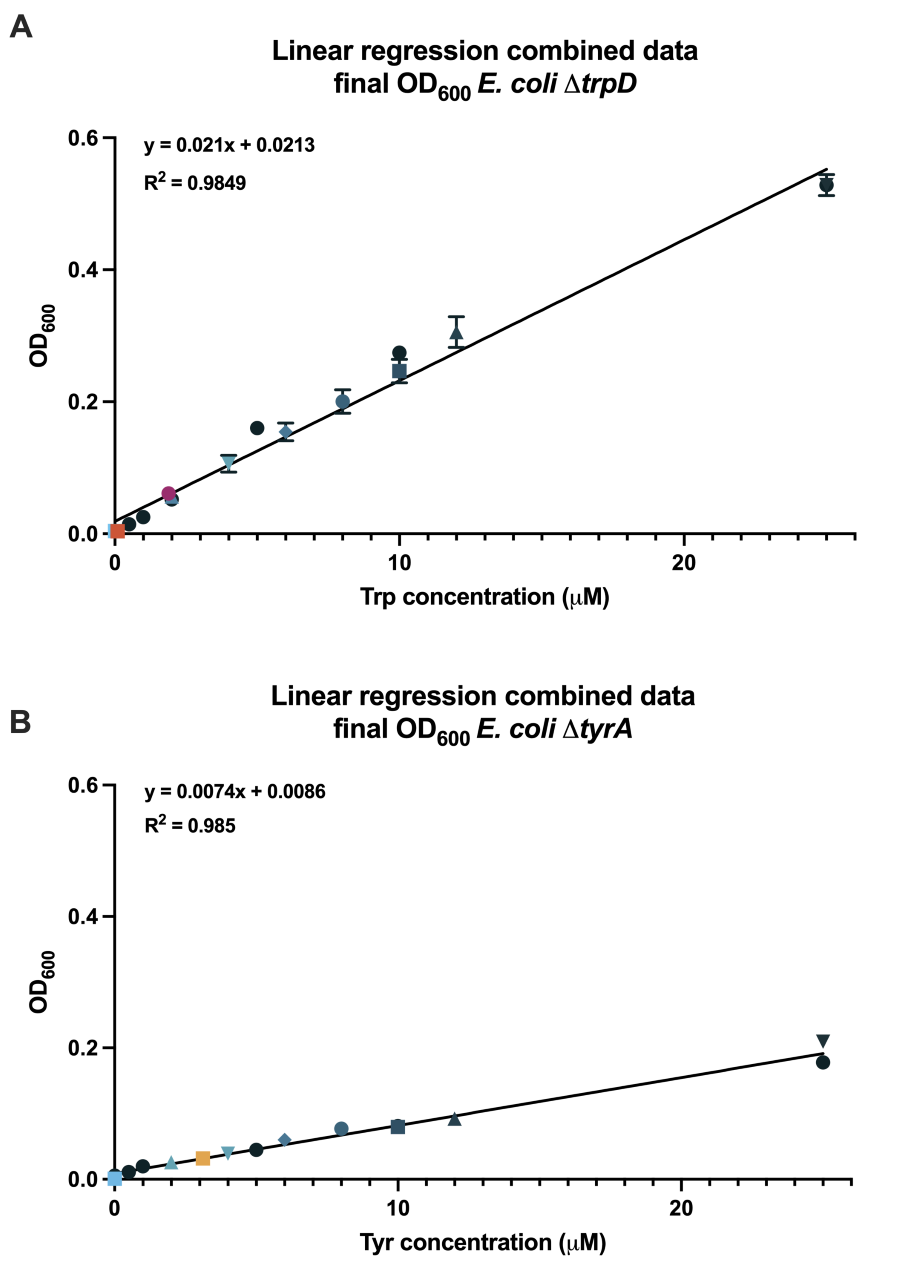 In parallel to the establishment of an amino acids codependency between E. coli and P. putida, a carbon-source dependency was engineered to confer an ulterior layer of safety to the system. 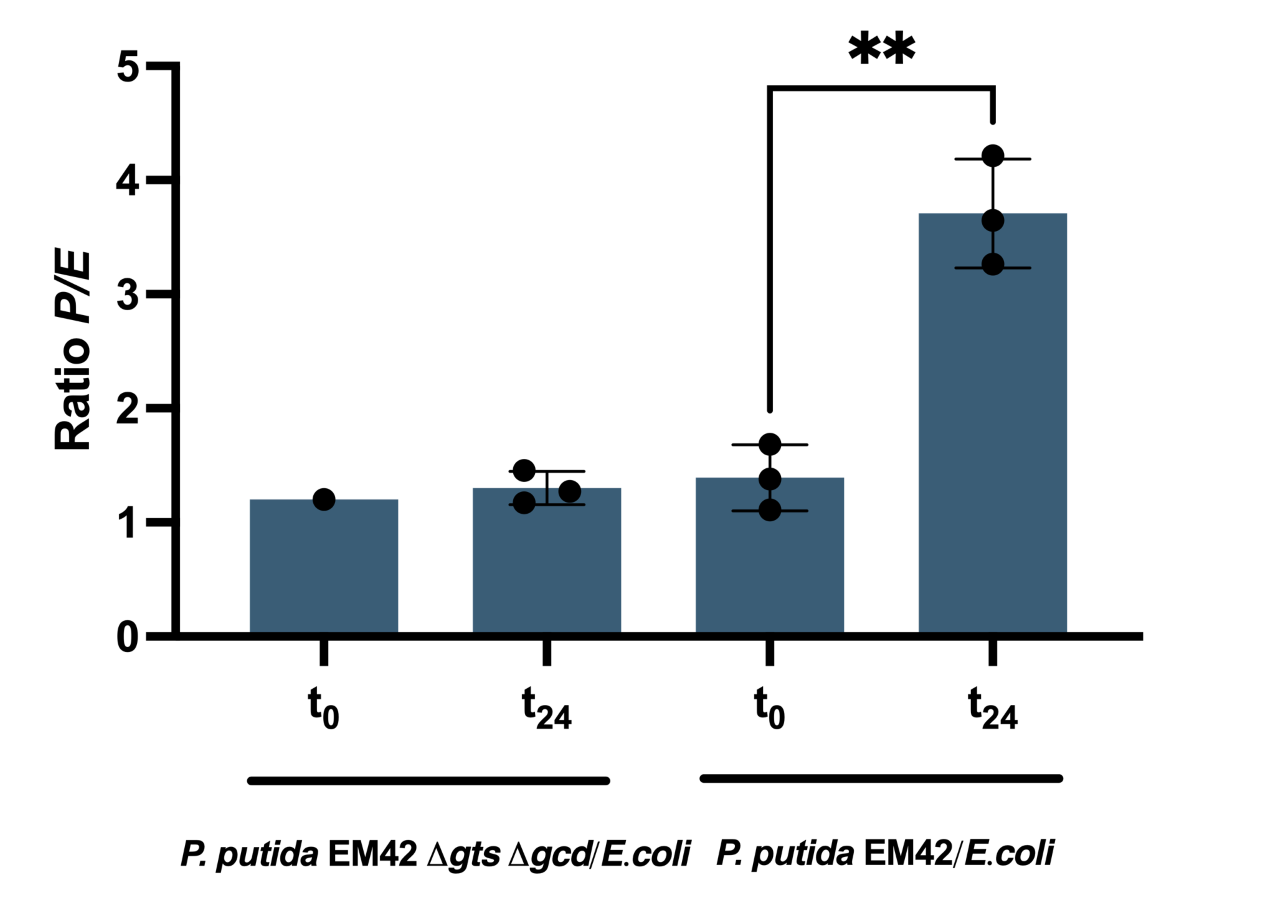 Figure 8: Graphical representation of the ratios of P. putida and E. coli in co-culture at t0 and t24. Each dark circle indicates a single replicate, while the bars indicate the mean of replicates at the time points indicated below the graph. The letter “P” indicates P. putida, while the letter “E” indicates E. coli. t0 = 0 hours, t24 = 24 hours. Only significant differences are plotted and are indicated with a ** (**p value < 0.01).

This study laid the first basis to establish a cross-feeding community of E. coli and P. putida. Specifically, codependency of the strains was engineered to rely on the exchange of Trp and Tyr and P. putida was found to be dependent on the acetate secreted by E. coli for growth.

To conclude, this study offers promising preliminary results regarding the establishment of a cross-feeding community of E. coli and P. putida, that could effectively be implemented within the Cattlelyst biofilter to increase the safety of the system.