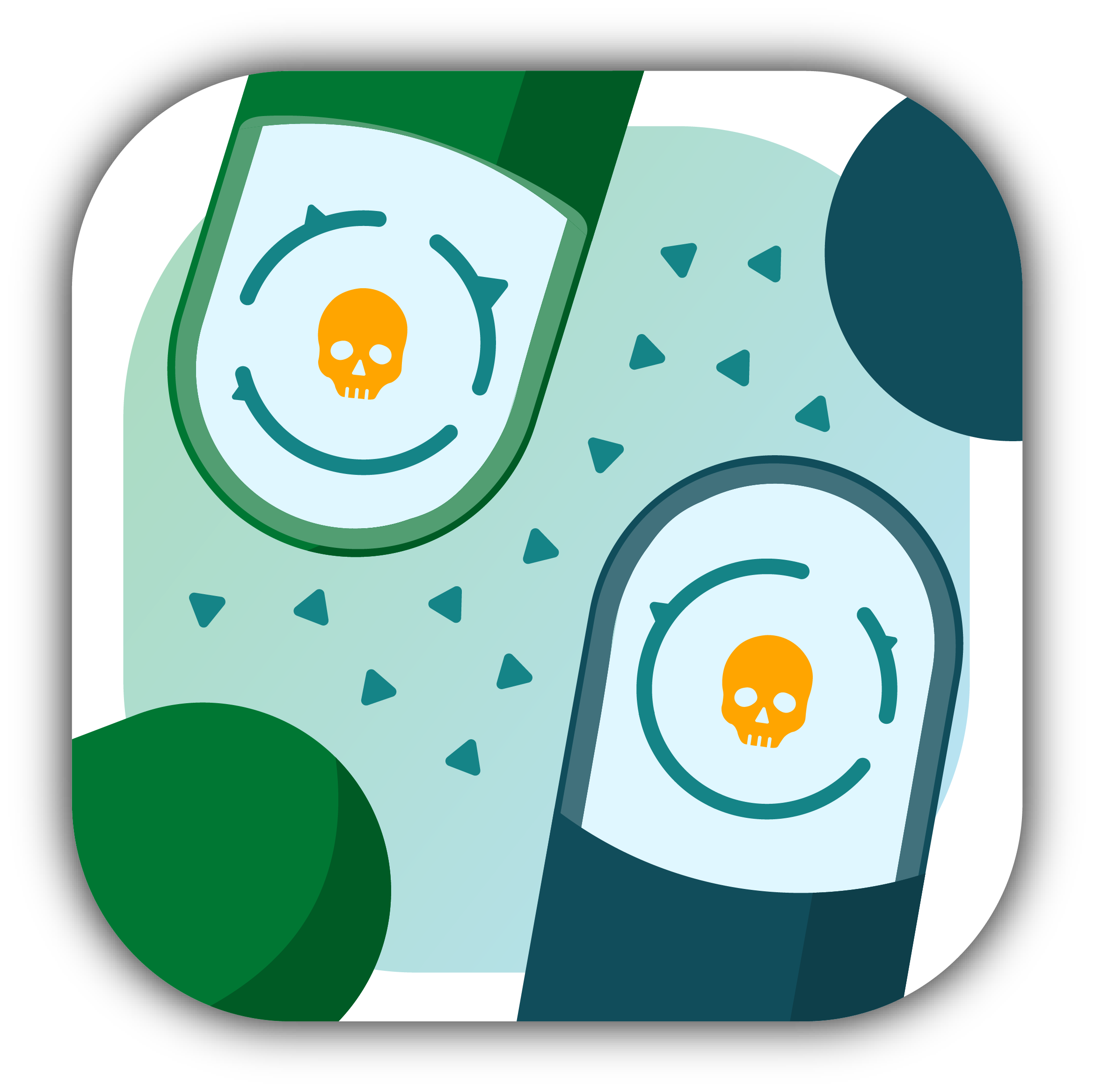 One of the pillars on which Cattlelyst is build is biosafety. To ensure biocontainment, three safety mechanisms were designed, of which one is the proximity-based kill switch. Quorum sensing is used to ‘sense’ the cell density. If a bacterium escapes from the biofilter, the low cell density activates the production of a toxin and repress antitoxin production, thereby killing the cell. Using a proof of concept study in which the envisioned toxin is replaced by GFP and the corresponding antitoxin by RFP, the dynamics of the circuit were tested. This showed that medium rich in the quorum sensing molecule, AHL, represses GFP production and activates RFP production. Our biofilter will consist of a co-culture of P. putida and E. coli. We built the circuit in P. putida, and to make E. coli dependent on P. putida, we built the same circuit in E. coli without the ability to produce AHL. A co-culture experiment of P. putida and E. coli showed that P. putida is able to activate the quorum sensing circuit in E. coli. Combined with the observed high AHL sensitivity, we showed that quorum sensing might be a good mechanism to base this safety circuit on.

Because we designed our biofilter Cattlelyst for real-world application on cattle farms, biocontainment of the GMO’s is crucial. Therefore, we have designed three layers of safety. The first layer is based on the methane concentration, which is relatively high inside the biofilter, resulting in a methane-dependent kill switch . The second layer is the proximity-dependent kill switch, which is linked to the methane-dependent kill switch, as proximity is an input signal for the hybrid promoter that control toxin production in that kill switch. Lastly, the third layer is based on auxotrophy, which makes Escherichia coli and Pseudomonas putida dependent on each other, making them unable to escape from the biofilter by themselves. Combining these three layers of safety ensures total dependency of the two bacterial species with the biofilter conditions and with each other, making them unable to escape from the biofilter.

To link the cell density to cell survival, this quorum sensing circuit needs to be coupled to something that can kill the cell. For this, we chose the hok/sok toxin-antitoxin system (BBa_K1783001). In its natural context, the system ensures plasmid maintenance [4], [5]. The Hok protein can kill the cell by damaging the cell membrane [4], [6]. Translation of the hok mRNA is inhibited by sok RNA by binding the hok mRNA, thereby blocking ribosome access [6]. When the cell loses the plasmid, there is no new transcription of hok and sok (m)RNA. The sok RNA is very unstable, with a half-life around 30 seconds, while the hok mRNA is relatively stable with a half-life of 20 minutes [7]. After plasmid loss, only hok mRNA will be left in the cell which is translated to Hok protein, killing the cell [4], [8].

The quorum sensing and hok/sok toxin-antitoxin system will be coupled as follows; The hok gene is put under the control of the lux pL promoter, which is inhibited by the AHL-LuxR complex. The sok gene is put under the control of the lux pR promoter, which is activated by the AHL-LuxR complex at high cell densities (see Figure 1). When the cells are inside the biofilter, where the cell density is high, the toxin production is inhibited while the antitoxin production is activated (see Figure 2). When a cell escapes from the biofilter, the cell density is low, so the toxin production is no longer inhibited while the antitoxin production is not activated anymore (see Figure 3). The hok mRNA accululates, so the toxin protein is produced, leading to cell death. This circuit is build in P. putida. In our biofilter, we have a co-culture of E. coli and P. putida. We built a similar system in E. coli, without the ability to produce AHL. This adds an extra layer of safety (see Figure 4), as E. coli is now dependent on P. putida for AHL, while P. putida is also dependent on E. coli because of the carbon source-dependency, making them unable to escape alone.

Figure  2: Inside the biofilter, the AHL (blue circles) concentration is high because of the high cell density. This activates antitoxin production while inhibiting toxin production.

Figure  4: In E. coli, a similar circuit is build, without the ability to produce AHL. This makes E. coli dependent on P. putida for AHL production, giving an extra layer of safety.

To test this system, a proof of concept study is performed in which hok and sok are replaced by a fluorescent reporter. This is done to prevent cloning difficulties and because fluorescent proteins are easy to measure. The goal is to make P. putida activate the quorum sensing circuit in E. coli. To achieve this the following questions need to be answered:

The constructs were transformed in E. coli K12 (MG1655). To test if the designed constructs were activated by AHL, plate reader experiments were performed in which both the OD and the fluorescence were measured over time.

As both the lux pL and lux pR promoter need to work simultaneously, E. coli K12 was transformed with both the reporter-pR-RFP and reporter-pL-GFP construct. With this strain, plate reader experiments were performed.

To test if the quorum sensing circuit in the reporter E. coli strain can be activated in co-culture conditions, an experiment was conducted where two E. coli strains were grown together on a agar plate. The two strains used were the AHL-producing positive control-pR-RFP strain and the reporter-pR-GFP strain. Different dilutions of an overnight (ON) culture of the positive control and wild type strain were plated. On top of this, drops of different dilutions of the reporter strain were added and the plates were incubated overnight. The next day, pictures of the fluorescence of the plates were made. This experiment was repeated with the co-culture of P. putida and E. coli.

To investigate the dynamics of the designed constructs explained in Figures 5-10, plate reader experiments were done. The fluorescence was divided by the optical density and plotted over time (see Figure 14 – 16). Bargraphs were made at t=11 hours (see Figures 11 – 13). The bargraphs and time series plots show an increase in fluorescence of the reporter strain with the lux pR promoter when AHL is present in the medium compared to when no AHL is present in the medium (see Figures 11 – 12). For the constructs in which have the lux pL promoter, the time series plots and the bargraphs show that AHL in the medium downregulates GFP production (see Figure 13).

As both the lux pL as the lux pR need to work simultaneously in E. coli in our final circuit, both the reporter-pR-RFP and reporter-pL-GFP constructs were put in one E. coli strain. The plate reader experiment was repeated with this strain and showed that the constructs also show the desired dynamics when present simultaneously (see Figure 17).


For the functioning of the biosafety circuit, the toxin/antitoxin ratio in high cell densities versus low cell densities is important [9]. To obtain a sufficient big change in the toxin/antitoxin ratio in high versus low cell censities, the circuit needs to be sensitive to an input signal, in this case AHL concentration. The sensitivity of the circuit to the AHL concentration (with is related to the cell density) is calculated by;

As can be seen in Figure 18, the circuit is sensitive to the cell density and the sensitivity increases over time.

Figure 19: Fluorescence of the reporter-pR-GFP strain at t=11 hours grown in 25% CM rich in AHL produced by P. putida or 0% CM medium as negative control. The fluorescence is corrected by the OD and normalized for the fluorescence where 0% AHL medium is added.

As the CM produced by both E. coli and P. putida showed activation of the lux pR promoter, an experiment was done to investigate if this activation is also obtained in co-culture conditions. The positive control-pR-RFP strain of E. coli and P. putida were grown on an agar plate with the reporter-pR-GFP E. coli strain. Pictures of the fluorescence of the plates showed activation of the reporter-pR-GFP E. coli strain when grown together with AHL producing E. coli or P. putida strains.

Figure 22:Co-culture of the E. coli reporter-pR-GFP strain and the P. putida positive control-pR-RFP strain (left) or the WT (right) as negative control. The positive control/WT strain was spread over the plate and drops of different dilutions of the reporter strain (OD = 0.5·10-1 - 0.5·10-5) were added on top. Pictures of the green fluorescence were made.

To test the dynamics of the quorum sensing part of the safety circuit, a proof of concept study is performed in which hok (toxin) is replaced with GFP and sok (antitoxin) by RFP. The quorum sensing constructs with the lux pR promoter were shown to be activated by the conditioned medium rich in AHL produced by both E. coli and P. putida and the lux pL promoter was repressed by the conditioned medium. Both promoters were still activated or repressed when they were both present in the same strain, and were showing a high sensitivity to AHL. A co-culture experiment done on agar plates showed that in co-culture conditions where P. putida is producing AHL, the quorum sensing circuit with the lux pR promoter in E. coli is activated. These results show that quorum sensing is a suitable input signal for the proximity-dependent kill switch. Replacing the fluorescent proteins with the envisioned toxin and corresponding antitoxin, could lead to a safety circuit that is able to kill any escaper cell.