1. Brief description of the issue

Using α-acids as a standard to estimate the shelf life of beer. Aging is the main problem in the preservation of beer. Beer aging is generally an oxidation process that causes off-flavors and darkened colors. α-acids are a class of compounds that provide the bitter taste of beer. While brewing α-acids may be isomerized to form the iso-α-acids due to the application of heat in solution. The two different kinds of α-acids in beer, trans-iso-α-acids, and cis-iso-α-acids, have a very similar structure but different in oxidated speed. Trans-iso-α-acids are much easier to be degraded while the cis- is more stable. Thus, the concentration ratio of trans- and cis- α-acids are different between fresh beer and aged beer. In Li, Huang & Lu’s research, the concentration of cis/trans-iso-A-acid was determined by high-performance liquid chromatography. The ratio of cis/trans-iso-A-acid decreased from 0.62 to 0.49. Therefore, calculate the average ratio of trans- and cis- α-acids in the oxidation progress, we may get this ratio as the shelf life bound of our products. 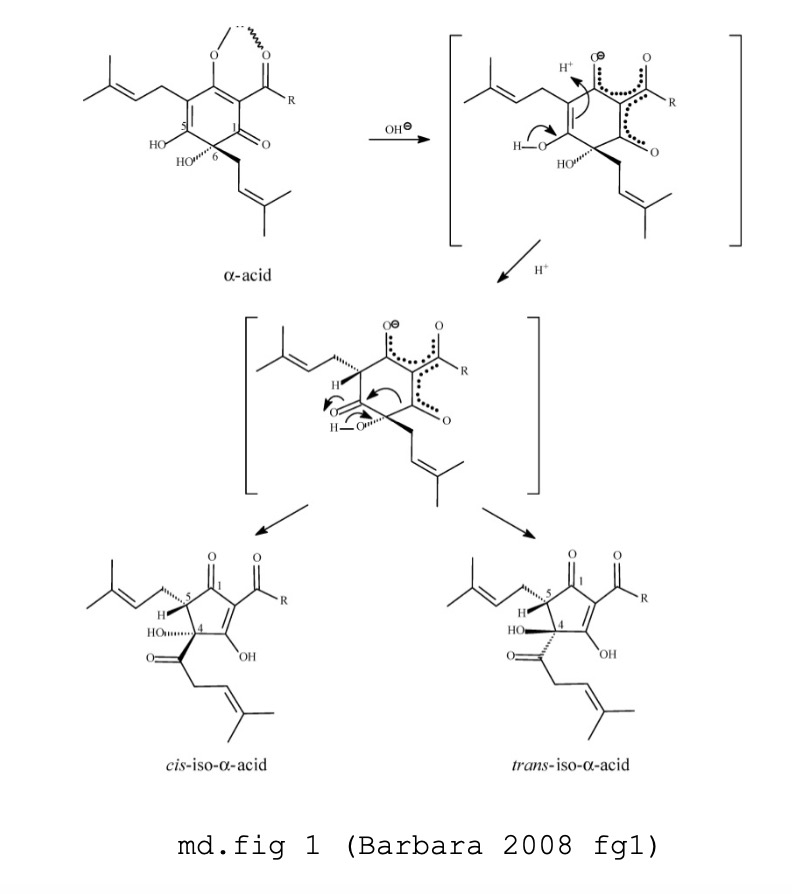 On the basis of knowledge of ratio between trans- and cis- a-acids, using least squared method, we are able to build a fomular to estimate the shelf life of beer. 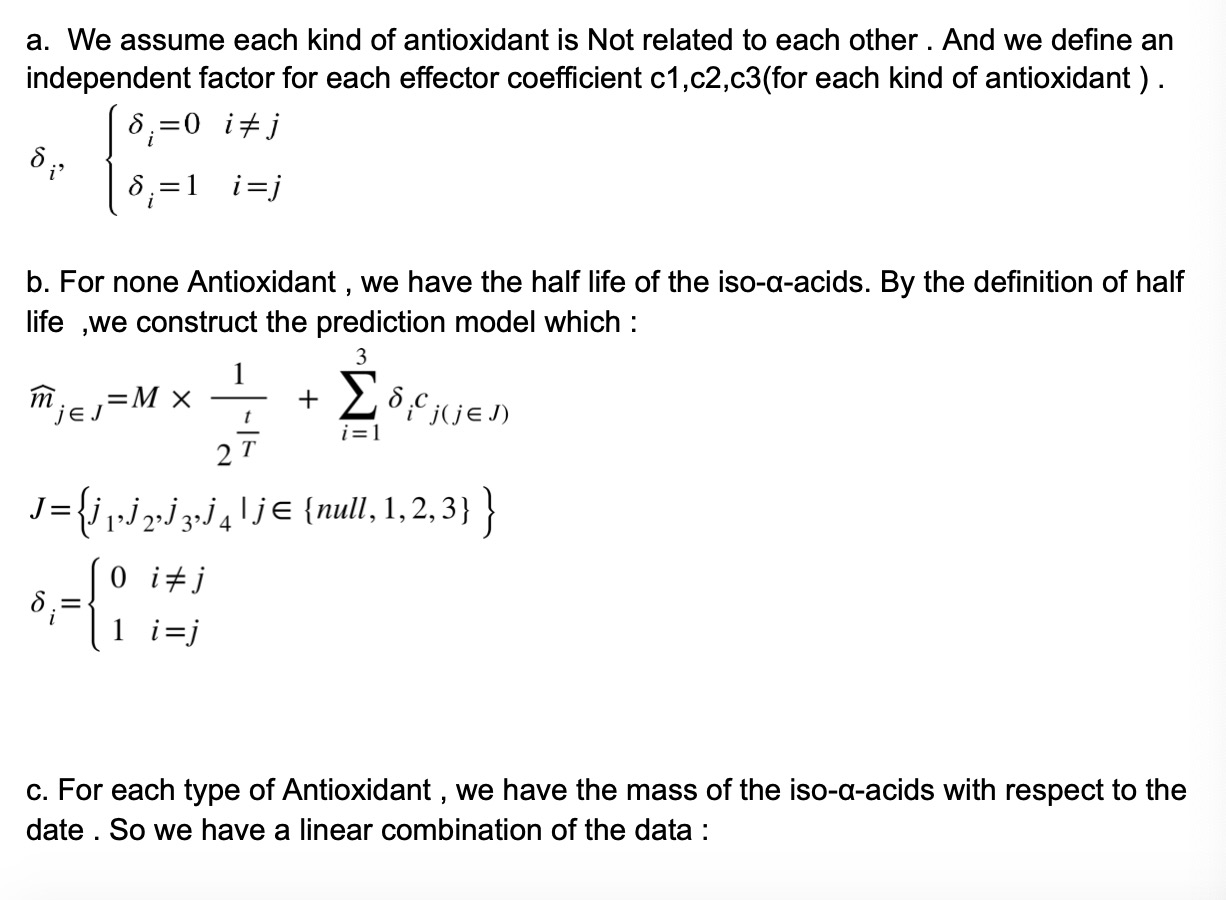 b. Assuming the storage temperature for the beer is 25 Celsius degrees. Here is the beer shelf life we collect on the internet. We can predict the tol using the half life function. According to table we assume the shelf life for normal beer is 7 months(7/12 year):

Because no paper online had a quantitative analysis of iso-a-acid and chitooligosaccharides. So we used theatrical kinetic analysis and based on online data and wet lab approach.

<1>. The iso-a-acid and chitooligosaccharides are all reducing agents. They all have reactions with ROS in beer. So, we have such relation :

Suppose the total amount of energy in this redox-reaction system is the same amount. In that case, a relation between the amount of substance can be defined.

<2>. According to Barbara’s research, They have used the kinetic equation and experiments to get the Ea for all iso-a-acid:

<4>. We could form a Normal matrix by the kinetic equation provided by Li, since the chitooligosaccharides are added. As (5) shows, more iso-a-acid can be counted. Their energy is 19.28 KJ.

f. For SOD data, SOD has a very short half-life which makes it hard to predict and prove its utility.

As matlab computation shows , The shelf life of beer added COS is 327 days !

a. We can briefly predict the shelf life of beer using our Yeast(chitooligosaccharides) through our model.

b. The model proved the chitooligosaccharides in beer can actually extend beer’s shelf life, increasing the antioxidant energy.

c. The model give an idea for further experiment which try to extend the shelf life of beer to get the training data. Also, further calculation could depend on the general model in 1.

a. The model relies on a huge amount of experiment datas. And, recent research about this field is lacking data. To improve it,we can do those experiments on our own.

b. The model only uses one approach to predict the data.Overfitting or poor fitting would occur. We should also test the accuracy ,either by using a new method(machine-learning) or doing experiments and collecting the testing data by ourselves.

c. Some overfitting would occur at our halflife equation since we only use 3 data to predict the relation. We only use the Linear model to prevent overfitting.

V. Code for our model

The overview of the code 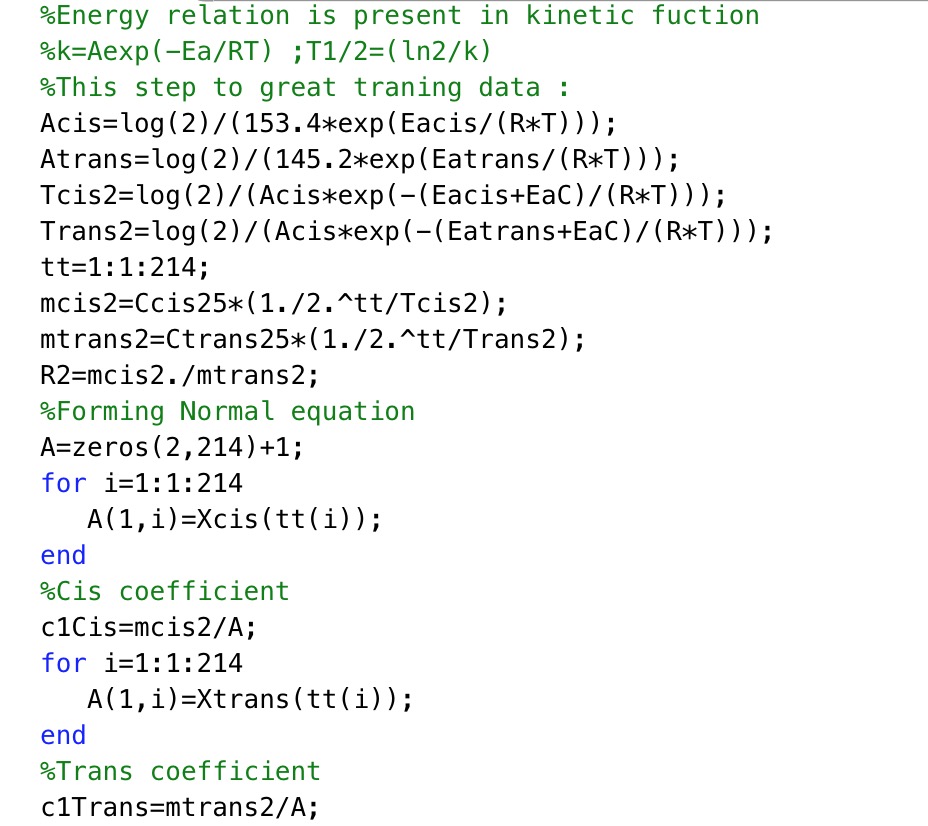