Modeling
A Continuation of 2020’s aSAP
In the 2020 edition of aSAP, modeling helped us identify and study the theoretical behavior of candidate enzymes. This year, that led to the experimental confirmation and characterization of our chosen enzyme, a dextranase from G. Algens.

This evolution is a great example of how modeling has already helped us bridge the gap between theory and practice within a short time frame, helping solve a problem that would have otherwise taken a long time to solve strictly with wet lab experiments. This modeling paved the way for many of our other scientific achievements this year, such as those described in Syrup Microbiology, Proof of Concept and Engineering Success.
Modeling Background of 2021’s aSAP
In 2021, using modeling in a completely different way this time, we set our sights on figuring out how aSAP would actually work in a real-world scenario. With our wet lab work covering biochemistry and microbiology in the scientific sphere of our project, we wanted to get a better grasp of its practical sphere: actually mixing our enzyme. This model would not be molecular, as it was in 2020, but rather mechanical.


Our goal: find a way to homogenize our enzyme with ropy maple syrup.

Maple syrup, defective or not, is stored in barrels that are then placed inside warehouses managed by maple syrup organizations in Quebec, such as the Producteurs et productrices acéricoles du Québec (PPAQ, French for Maple Producers of Quebec). 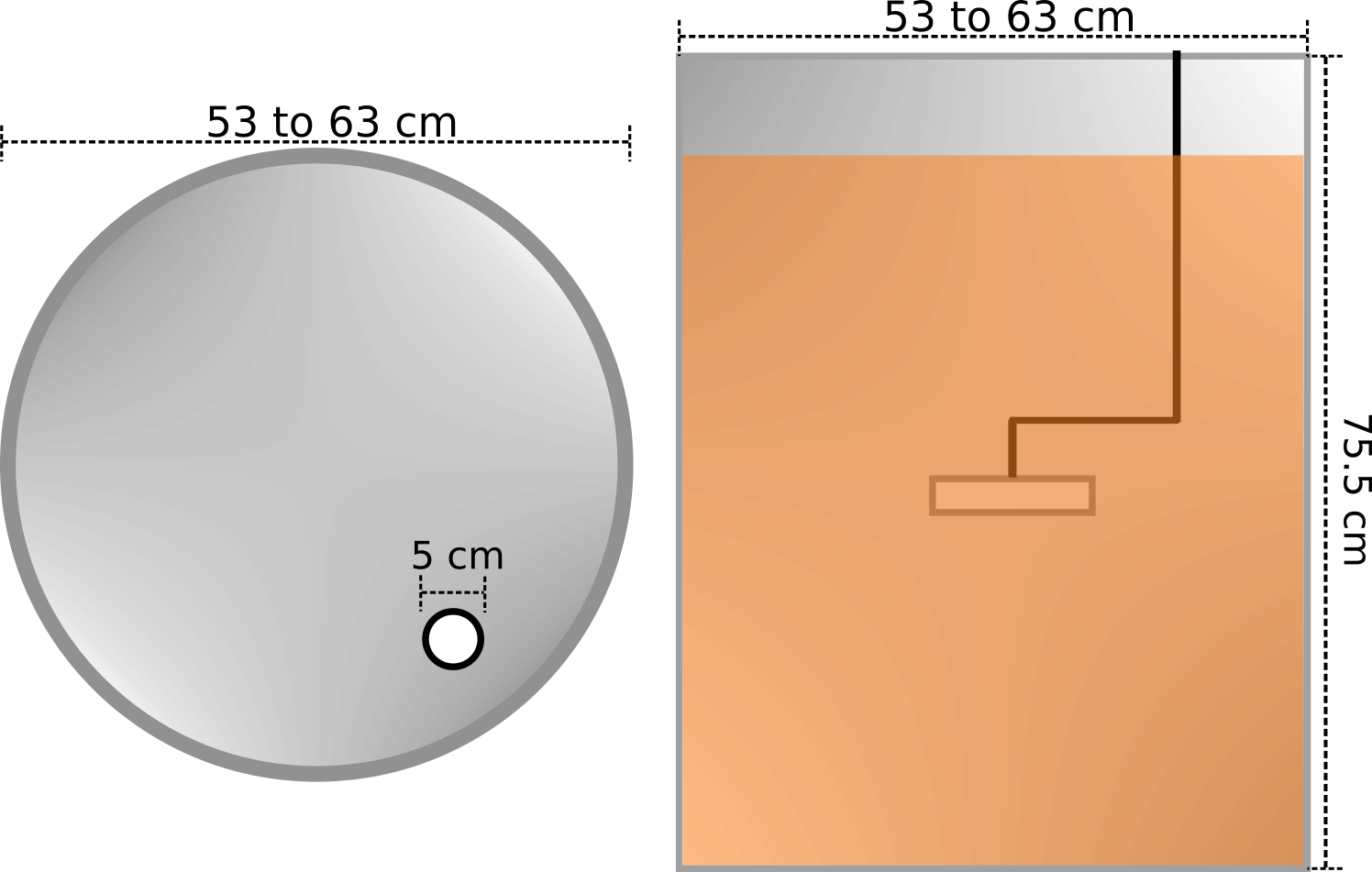 Figure 1: Barrel views from the top (left) and from the side (right). The initial mixer type is also shown on the side view. Barrel diameter varies from 53 cm to 63 cm (Arzate, 2010).
That proved to be difficult because of the small diameter (around 5 cm (Arzate, 2010)) of the hole used to fill barrels with maple syrup. A mechanical mixer strong enough to mix a viscous syrup, such as ropy maple syrup, would hardly fit through such a small opening. Another point is that the hole is not in the center of the barrel’s top, so it would also need to fold to pass through the filling hole, then unfold inside the barrel to rotate at its center to effectively mix the syrup (see Figure 1). This posed a problem for the mechanical capability and effectiveness of the mixer.

Figure 1: Barrel views from the top (left) and from the side (right). The initial mixer type is also shown on the side view. Barrel diameter varies from 49 cm to 58 cm (Arzate, 2010).


However, in discussions with the PPAQ, we discovered that producers and organizations each have their own storing barrels, meaning that maple syrup is transferred from a producer’s barrel to a storing barrel used by said organizations. That sparked the idea to implement a way for our enzymatic treatment to act during the transfer of the syrup between the two barrels, as shown in the picture below. Once again, this would not add a new processing chain, rather just a step in the current processing chain. Having solved the physical implementation step, the next step was to find a mixing process with the help of modeling.


In order to model a realistic mixer, we needed knowledge of the existing mixers, parameters to consider, and modeling possibilities. With some research, we discovered the existence of computational fluid dynamics (hereby referred to as CFD). However, among our student team members, none had prior knowledge of CFD, since no one had been trained in mechanical or chemical engineering. We therefore contacted and partnered up with Hossein, a chemical engineering Ph.D. student who helped us through all modeling steps. 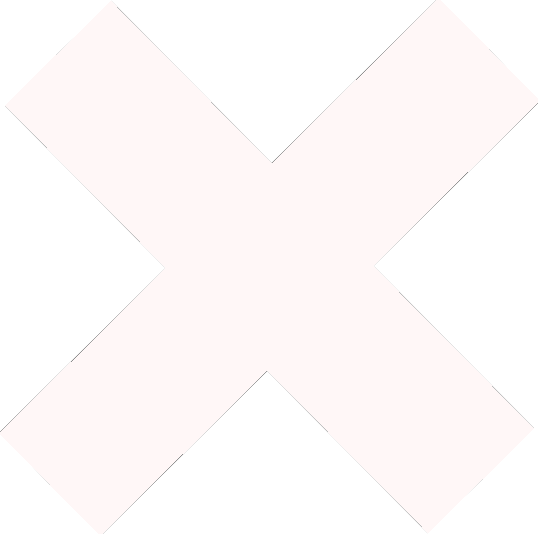 The first step was to measure viscosity of ropy maple syrup, since no data was publicly available. These results were taken independently from rheological experiments mentioned in Results because data was required prior to those experiments. We also had earlier access to a rheometer in Hossein’s research group’s laboratory.

Rheological measurements show viscosities of 0.4 Pa·s, 1 Pa·s and 0.7 Pa·s for ropy maple syrup samples 1, 2 and 3, respectively. These results were an important parameter to know in order to do CFD simulations. 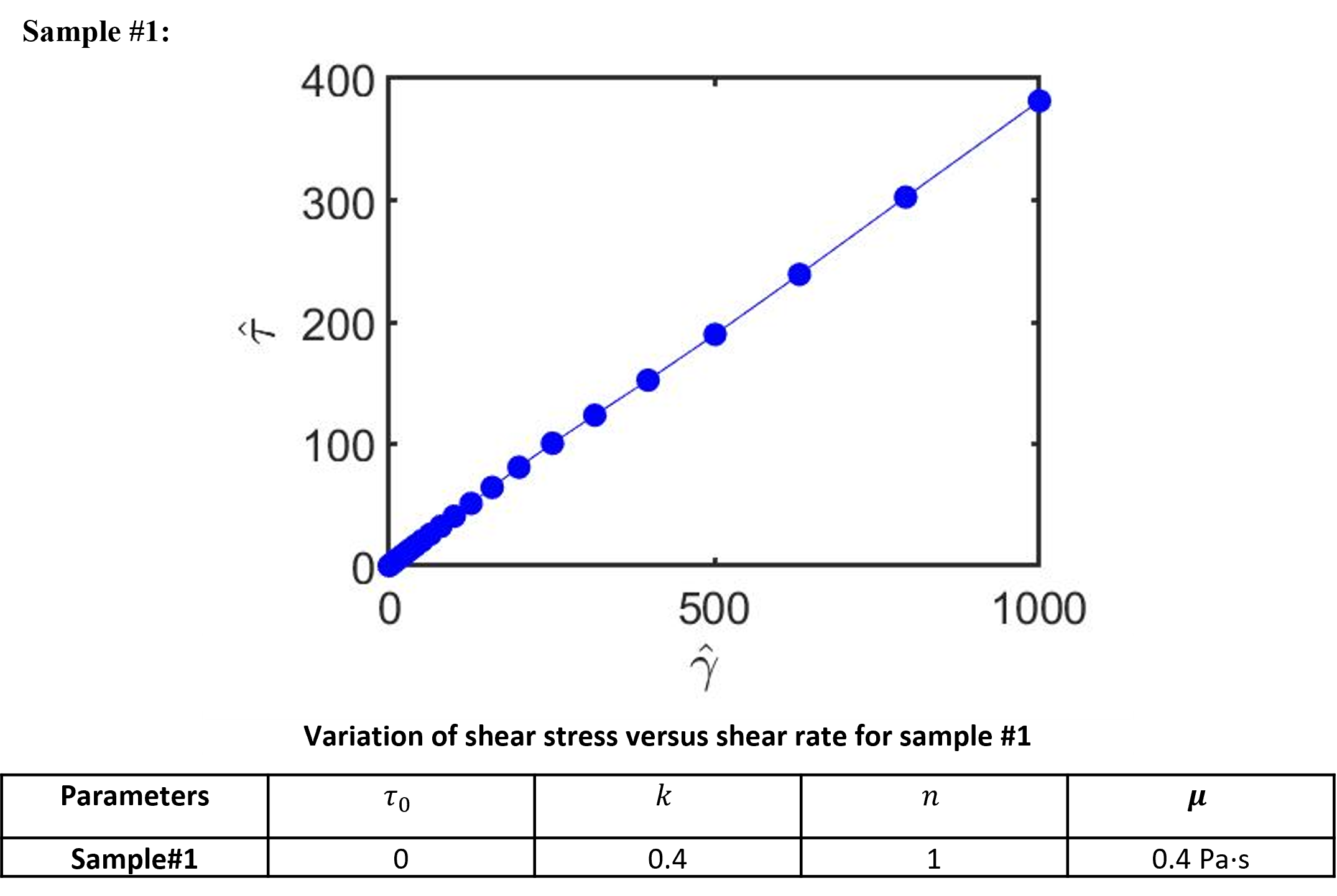 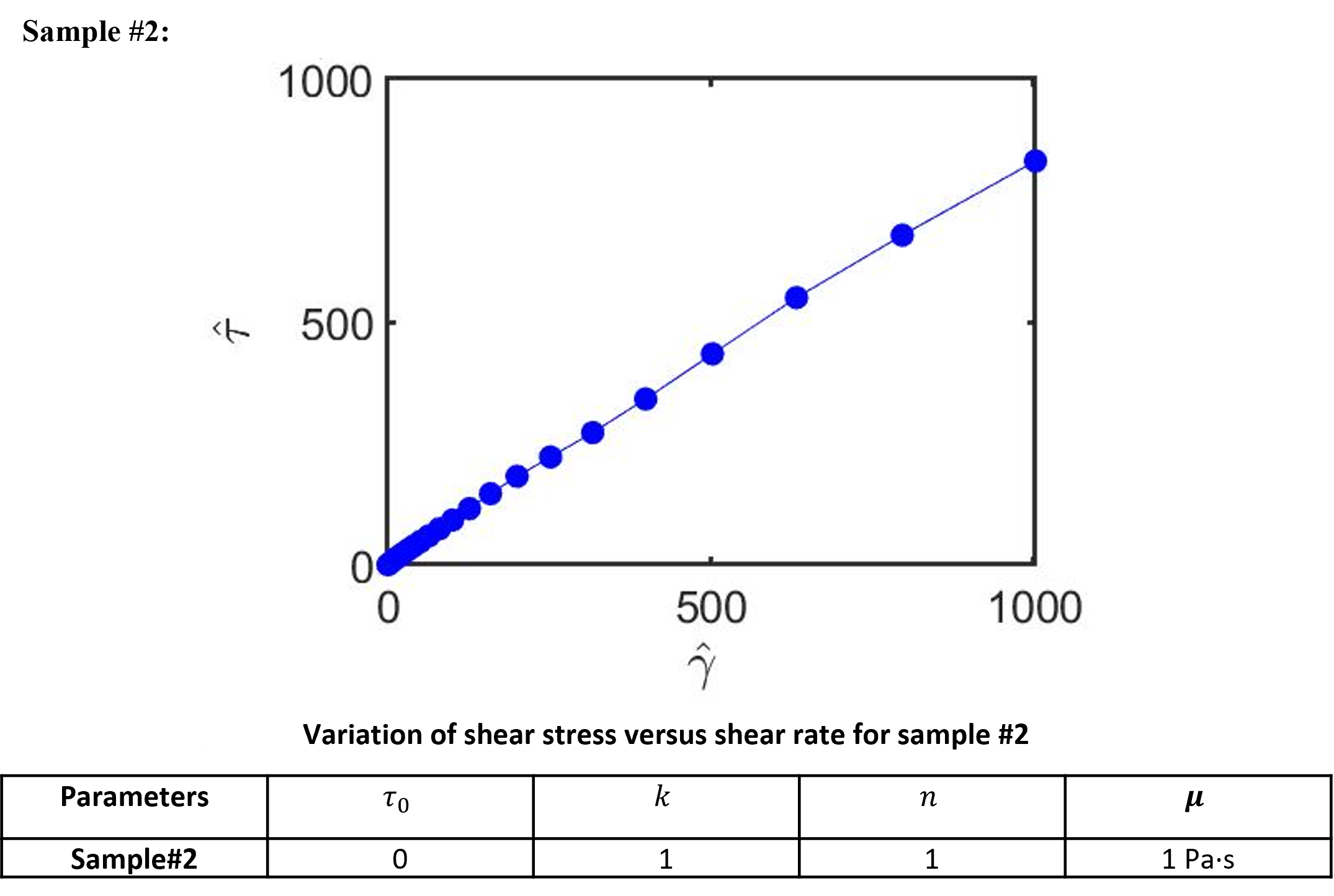 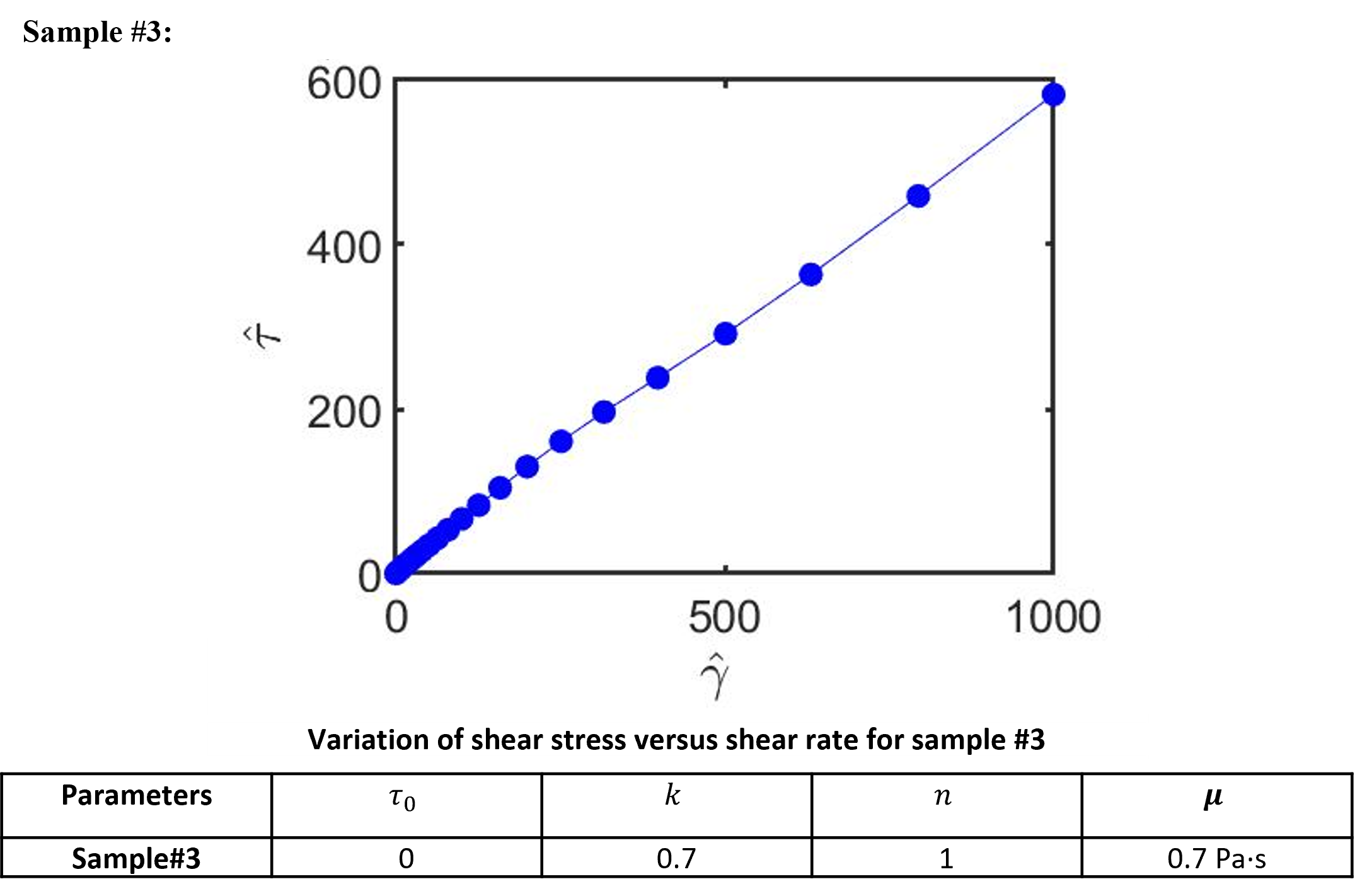 In this work, to calculate the viscosity based on the rheological parameters, we used the constitutive equation of the Herschel-Bulkley model:


where τ is the shear stress, γ ̇is the shear rate, τ0 is the yield stress, k is the consistency index, and n is the flow index.


Note that, if n ≈ 1 and τ0 = 0, this model reduces to the Newtonian fluid. The rheological parameters of our samples were measured using a high precision digital rheometer (DHR-3 TA Instrument) at 4°C*.

* Temperature at which ropy maple syrup samples were stored.

The second step involved research of existing mixers to plan CFD simulations. From that research, two mixing processes stood out for their applicability in the processing chain, effectiveness and modeling possibilities: a jet mixer (Patwardhan and al., 2003) and a paddle mixer (Ebrahimi and al., 2018) .
3. Simulations

The final step consisted of doing CFD simulations on both mixers to eventually consider one in a potential implementation in maple syrup organization facilities.

Computational Fluid Dynamics Simulations
In this work, a numerical scheme using CFD method is developed to analyze multiphase flow, or the interactions of multiple liquids, within a mixer tank. In this regard, ANSYS Fluent (ANSYS, 2016) is used as the modeling tool.

A tank with an integrated mixer is used in our simulations because in a real scenario, ropy syrup would be transferred from the producer’s barrel into a tank, then mixed with our dextranase and finally transferred into another barrel for storing. See Figure 2.

The Eulerian-Eulerian approach is implemented to simulate the multiphase flow during the mixing process. In our case, the ambient fluid (i.e., ropy maple syrup) and the injection fluid (i.e., the enzyme mixture) are assumed as the primary phase and the secondary phase, respectively. In this simulation, the governing equations are described in the following forms:


where α and ρ represent the volume fraction and density, respectively, for each phase.


∂/∂t (αρv →) + ∇.(αρv → v → ) = -α∇P + ∇.τ ̿ + αρg →
The interaction forces between phases are considered on the right-hand side of the momentum equation. Based on the literature, in this study, we merely consider the drag force and the impact of other forces are neglected. In addition, the Schiller-Naumann model is implemented which is widely used in literature for this kind of problem.


Assumptions and Parameters* to Consider

* Parameters mentioned are non-exhaustive and only portray the specific conditions of ropy maple syrup.

For the simulations, we used a ropy syrup viscosity of 1 Pa·s corresponding to the sample #2. That viscosity score is 1000x higher than water. We wanted to test with the highest viscosity to recreate a “worst-case scenario.” However, some ropy maple syrup may be even more viscous than the samples we had access to. We made the assumption it would still represent an accurate simulation of real mixing processes.

We used water to represent the enzyme in the simulations. This assumption is made considering that the presence of the enzyme will not significantly modify the viscosity of its vehicle. The vehicle will also contain other components such as ions and a buffer solution rather than pure water. Again, we assume this will not alter the results significantly considering the high ratio of ropy syrup / water viscosity.

Density of water is considered to be 998.2 kg/m3 according to Ansys Fluent library (ANSYS, 2016). We set maple syrup density at 1333 kg/m3 by converting 67 Brix degrees (°Bx) to density units. The usual sugar concentration for maple syrup is 66°Bx, but syrup of 67°Bx is also made by maple producers and is slightly more viscous. We assumed regular or ropy maple syrup has the same density because producers monitor the boiling process of maple sap to aim for 66°Bx.

Lastly, all simulations were made in a two-dimensional environment due to Ansys Student license limitations and to the lack of computational power (such as a calculation server).

Jet mixers require a continuous flow in order to have an effective mixing process. Since we didn’t want to dilute ropy syrup any more than with the small quantity of the enzyme vehicle required, we had to consider using the syrup inside the tank to create the mixing flow. To test that, we simulated the mixing of ropy syrup with ropy syrup taken from the tank and coming out of the jet nozzle. To compare the mixing effectiveness of the jet mixer using a far less viscous fluid, we simulated water coming out of the jet nozzle. The Simulation 1 indicates that the syrup-water (ambient-injected fluids) combination mixes far better than the syrup-syrup combination. The flow pattern of the first combination shows a rotation of the fluids throughout the tank instead of the push of one fluid by another in the latter. Research also showed that the syrup-water combination is what is expected of jet mixers, but not the syrup-syrup combination (Patwardhan and al., 2003) .

These results made us realize that, in a practical situation, it would be hard to make ropy syrup, a highly viscous fluid, get pushed out of a nozzle through another highly viscous fluid. We couldn’t expect it to mix well enough for a small quantity of water (the enzyme vehicle) to homogenize well throughout the tank. We then turned to a more standard mixing approach in commercial uses: a paddle mixer.


For this type of mixer, we only analyzed a ropy syrup and water (enzyme vehicle) combination because of the ability of paddles to mix without being affected by the viscosity, unlike the jet mixer. However, we studied two types of paddles to determine which one would be best.

Simulation 2 shows the two types of paddles studied. In these simulations, it is important to know that the blue color not only represents the enzyme but its trajectory. When solid blue, this means that the enzyme has made contact with ropy syrup and is actively reacting. Red shows that the enzyme has not yet made contact with ropy syrup. Knowing so, it is easy to see higher turbulence with the cubic paddles, meaning better contact between the enzyme and the syrup. The flat paddles produce a smooth mixing, leaving bigger unmixed areas at the end of the simulation compared to cubic paddles.

Therefore, a paddle mixer using cubic paddles would be more efficient than one using flat paddles.

Limits: We are aware of the limitations imposed by a 2D aspect of a rotating impeller. The characteristics of 3D simulations are far more complicated and time-consuming. In the case of a real-world implementation, more accurate simulations will be done. The purpose of these simulations was to test two types of researched and recommended mixer models and propose a more suited model for further study.

As we established, we did not only use computing power to generate our results for the modeling aspect of aSAP 2021. It also involved research, data gathering, substantial learning and a lot of optimization to better represent what our project could offer in terms of CFD simulations.

Between the models we tested, the paddle mixer with cubic paddles was the most appropriate model to mix our enzyme with ropy maple syrup. After doing these modeling experiments, we now have a much more solid idea of how aSAP can be implemented, a net improvement to this year’s project.