In the Design section, we briefly introduced the experimental purpose and design ideas. In the Measurement section，we rigorously explain how we concretely realize these designs, and show the rationality of our process and the reliability of the results. In this section, we will correspond to it, summarize our final experimental data and results and make meaningful analysis to obtain new knowledge, re-evaluate the known and unknown factors in our experimental design. Finally feedback to the project to make it futher improved.
In this section，you can learn :
（1） We verify that the improved par--nfGFP has a shorter half-life.
（2） Through nucleic acid dyes, we observe the gradual disappearance of DNA in cells, thus verifying the formation of CREATE.
（3） By observing the rapid disappearance of nfGFP fluorescence signal in cells, it reflects the loss of gene expression ability of CREATE chromosome genome, thus confirming the formation of CREATE.
（4） By observing the growth status and colony number of the induced cells and normal cells on the solid medium, the results show a huge differences in the growth and reproduction capacity of the two groups of cells, which confirms the disappearance of chromosomes.
（5） Through flow cytometry analysis, we confirm the formation of CREATE by many parameters and signals and get the proportion of CREATE in the sample.
Due to the limitation of time, we have not complete all the experiments on exploring the features of CREATE, but the relevant experimental design has been determined.

In the following subsections, we will analyze all the experimental results in detail.

We used changes in the nfGFP fluorescence signal to characterize chromosome degradation. In the beginning, we directly took the GFP part into practice, while later, it is observed that GFP has a relatively long half-life, which is not conducive to further measurement. So, we designed and constructed the nfGFP part with a shorter half-life to improve the feasibility. 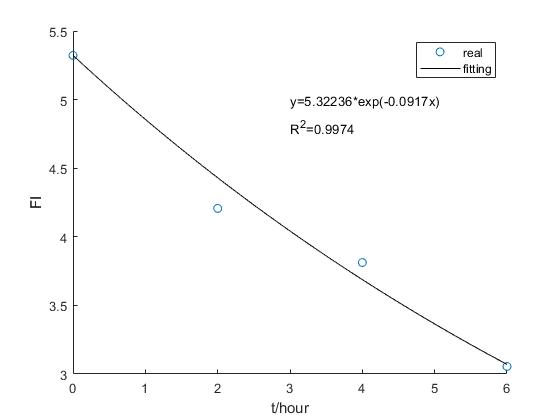 After cessation of induction, the nfGFP signal decreased to the level when the expression was not induced, indicating that nfGFP was rapidly degraded in the cells after the fGFP gene was no longer expressed. The data show that the half-life of nfGFP is around 7.6h, which is significantly reduced compared to the half-life time of GFP on average, confirming the validity of our design.

Characterization of the formation of CREATE


Observe the disappearance of the nucleic acid dye

Nucleic acid dyes made it possible to visualize the degradation of chromosomes. Hoechest is a membrane-permeable nucleic acid dye that binds to DNA and generates a strong fluorescent signal. We stained the cells with the dye and photographed them under a fluorescent microscope to directly verify whether the cells' DNA was lost.


The following two figures show the changes in the control group (Saccharomyces cerevisiae 4742 nfGFP) after 18h of staining with Hoechst dye. The control group showed an increase in the number of cells in the same field of view after 18 h, and the tiny dots in the cells with solid fluorescent signals due to Hoechst dye staining were always visible, which indicates that the control chromosomes were intact.
The following video shows the changes in the experimental group (Saccharomyces cerevisiae 4742 nfGFP with 7flip plasmid + Cre plasmid (cleavage system 2.0)) from 0 to 18h.

In the video, it is observed that most of the fluorescence signal disappears, visualizing the process of degradation of brewer's yeast DNA, which indicates that the cleavage system takes some time to work and the efficiency of CREATE formation is not yet 100%.

We use changes in the fluorescence signal of nfGFP to characterize chromosomal degradation. The nfGFP is a short half-life GFP that we designed, constructed, and experimentally validated.


More relevant information can be reached by clicking on the nfGFP part.

We expressed nfGFP with a frequently expressed promoter and integrated the part on the chromosome by homologous recombination. After that, we induced both experimental and control cells in culture. Since the chromosome genome of CREATE is disrupted by cleavage and no new nfGFP can be expressed, the fluorescence signal of CREATE will be lost soon with the rapid degradation of the original nfGFP. In contrast, normal cells in the control group can continuously express GFP, and the fluorescent signal intensity does not diminish. This difference can reflect whether the chromosome genome of the cells is degraded or not.
The following two figures show the changes in the control group (Saccharomyces cerevisiae 4742 nfGFP) in the nfGFP channel after 18h of induction. 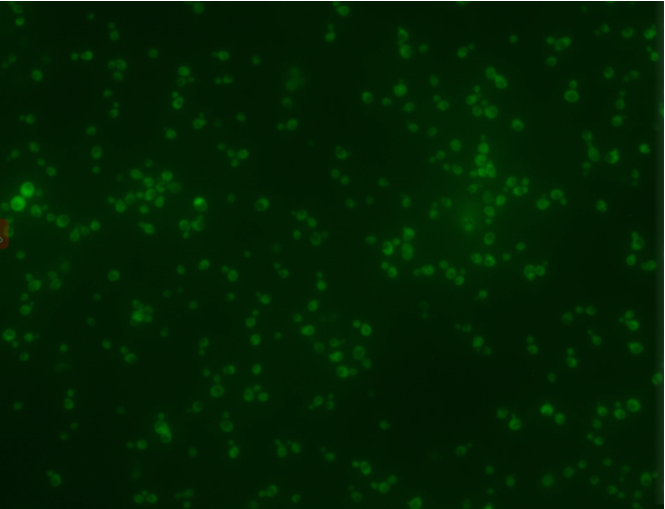 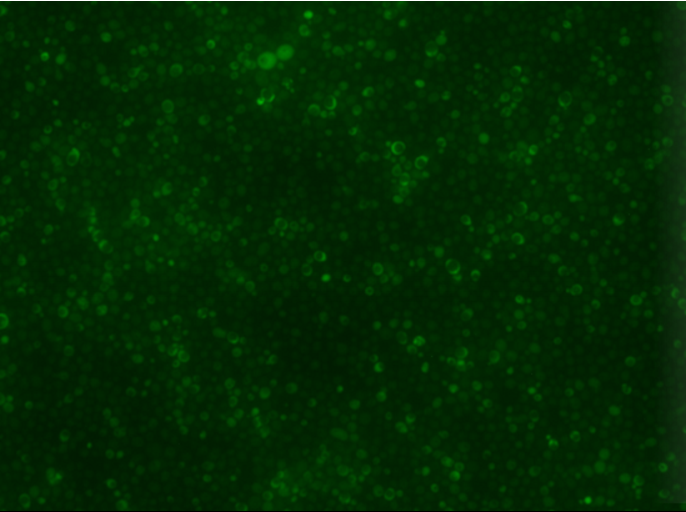 It can be observed that the number of cells increased, and the overall average brightness was approximately the same, which indicates that the continuous production and degradation of nfGFP fluorescent protein in the control cells reached a balance, the nfGFP part works properly, and the cell growth condition was well.
The following video shows the changes in the experimental group (Saccharomyces cerevisiae 4742 nfGFP with 7flip plasmid + Cre plasmid (cleavage system 2.0)) from 0 to 18h.

Comparing to the control group, we observe that the nfGFP fluorescence signal turns significantly dimmer, as seen in this video. Reasons for this phenomenon we assumed are : 1. The cleavage system disrupts the chromosome, and thus cells can no longer express nfGFP, which indicates that our cleavage system works appropriately.
2. The half-life of the expressed nfGFP is short, and the degradation rate is fast, which also coincides with our data on nfGFP parts, indicating that our measurement of the half-life of nfGFP is plausible. In the meantime, since the mechanism of nfGFP rapid degradation involves organelles and enzymes, it also reflects that CREATE still has a complete cellular mechanism, organelles, and metabolic activities despite the loss of the genome. We also took pictures of the same field of view after removing the GFP channel, showing that although CREATE could no longer express nfGFP, the cell structure remained intact. 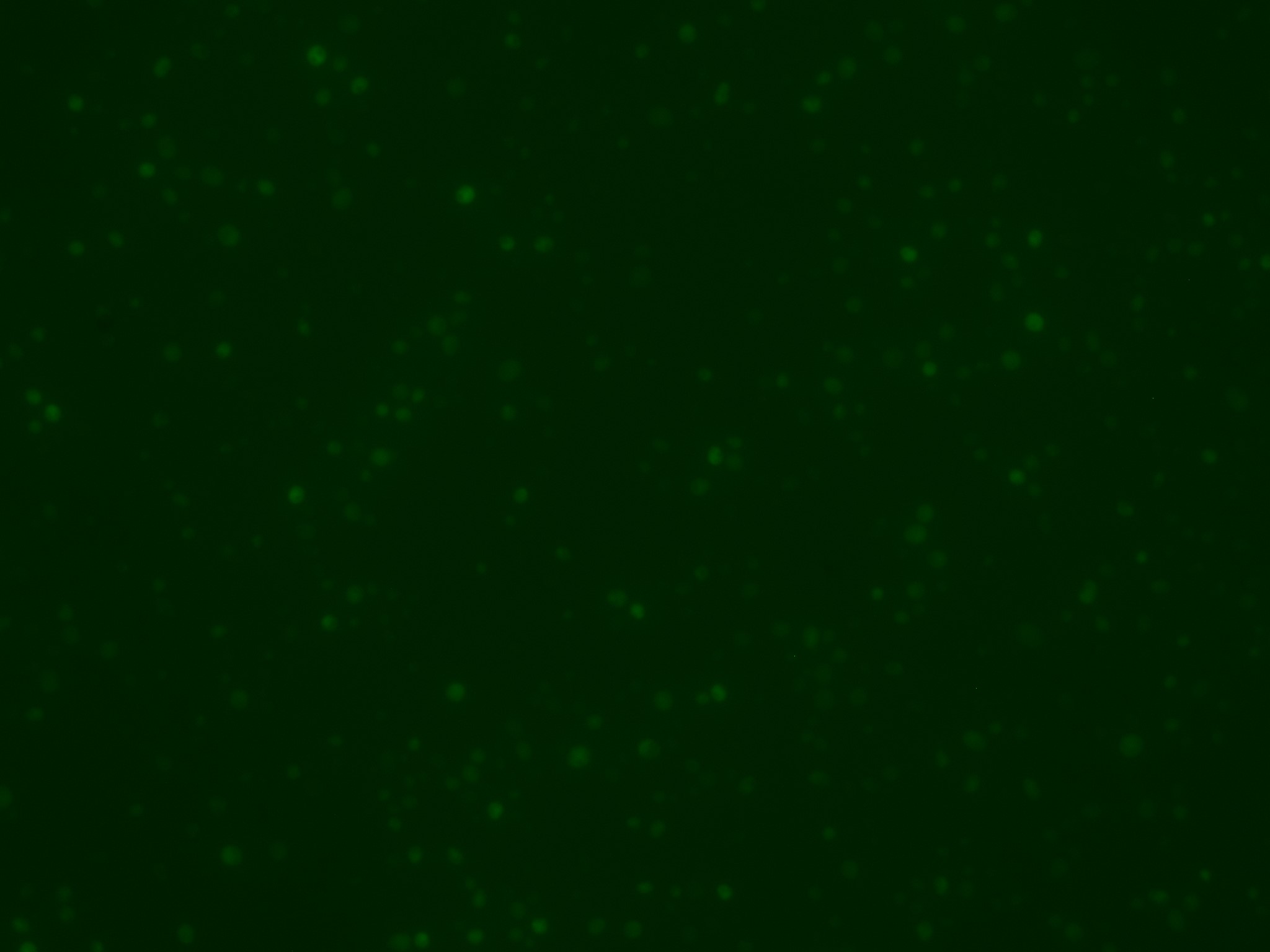 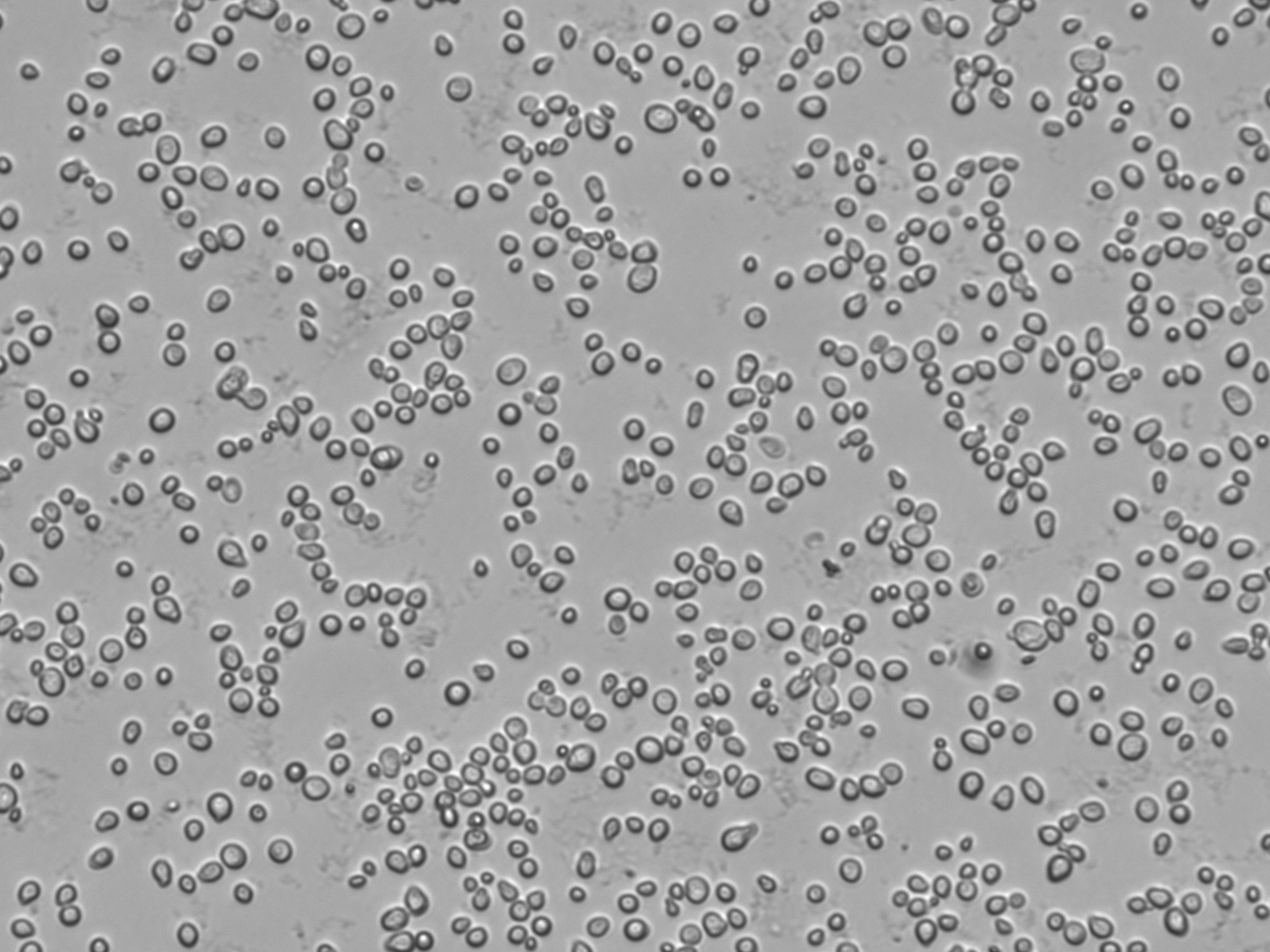 
To summarize the above analysis, we believe that CREATE is indeed being formed. Most of the CREATEs have complete cellular structures and the ability to complete some cell metabolic activities. This critical conclusion predicts that CREATE has the primary conditions to perform cellular functions and is a prerequisite for other future applications that we can perform with CREATE.

For our thoughts on how to apply the CREATE, you can click here

We used the difference in the growth curves of the experimental (CREATE) and control (without the cleavage system) groups to show that our cleavage system worked successfully and obtained a chromosome-free eukaryotic CREATE that was completely different from normal cells.
According to other research, OD600 was positively correlated with cell concentration during the logarithmic growth period.
We used a UV spectrophotometer to measure the OD600 of the bacterial solution. By measuring the optical density of CREATE and normal cells, we obtained the growth curves of both. If it was indeed CREATE, it could not grow and reproduce, while the normal cells of the control could. We confirmed this difference and thus corroborated the formation of CREATE.

From the figure, the experimental group that had their chromosomes cut did not significantly increase in yeast population compared to normal yeast cells, which coincides with our hypothesis that the CREATE cannot reproduce. After cutting, the growth curve of the colony in the experimental group should be below the normal yeast. The curve formed by the modified 7flip+cre cutting system is below the curve formed by the delta cutting system in the lower position, which shows that our improvement of the cleavage system is effective.

The following two figures show the results of the flow cytometric analysis, the left graph is the control group, and the right is the experimental group. According to the analysis results, our highest chromosome-free eukaryotic cell CREATE formation rate reached more than 80%. 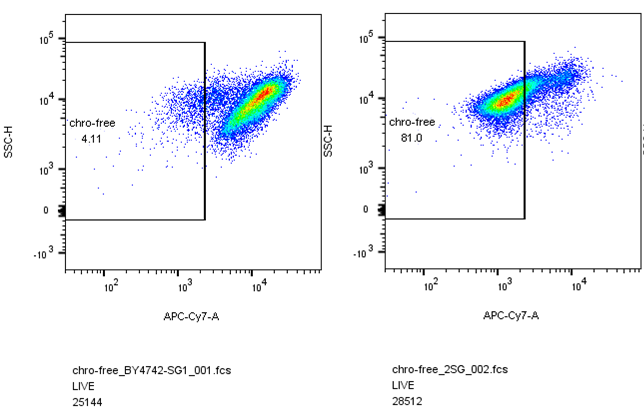 During the iteration of the project, we considered using the Saccharomyces cerevisiae SY14 strain, which has only one chromosome, as a chassis to make chromosome-free eukaryotic cells CREATE. We conjectured that SY14 might form chromosome-free cells more efficiently. We used flow cytometric analysis to compare the effect of the same cleavage system within different chassis strains simultaneously. To our surprise, the rate of chromosome-free formation was lower in strain SY14 than in strain 4742.

we can observe the different growth status between experimental group and the control group based on the results of the point dilution plate.This indicates that the part is in working condition and indirectly support the formation of the chromosomal-free eukaryotic cell CREATE. 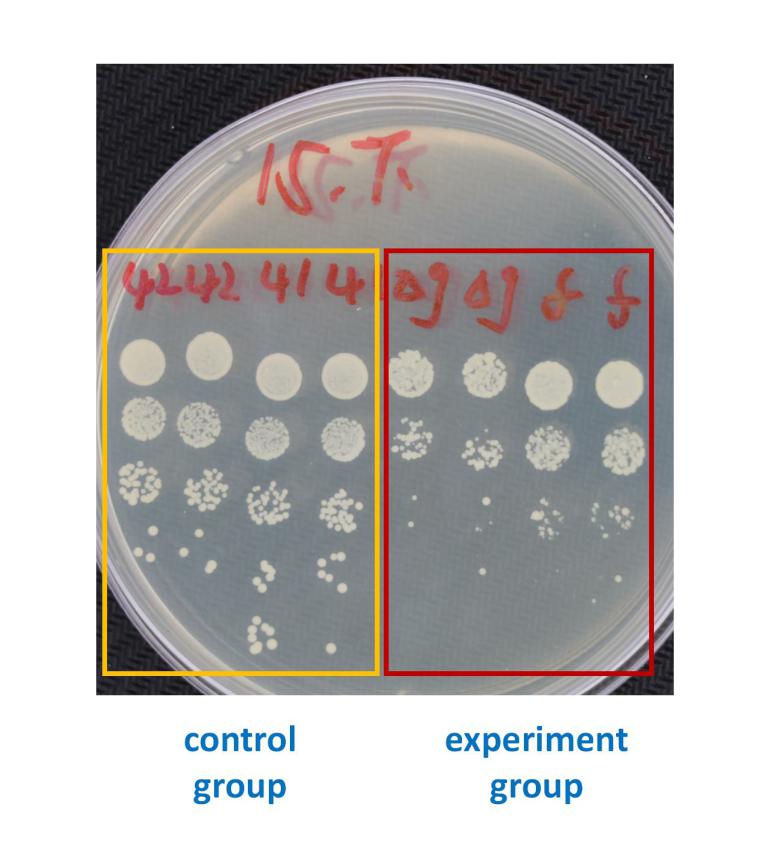 According to the number of colonies grown on the solid medium between the experimental group and the control group differed significantly. This indirectly support the formation of the chromosomal-free eukaryotic cell CREATE. 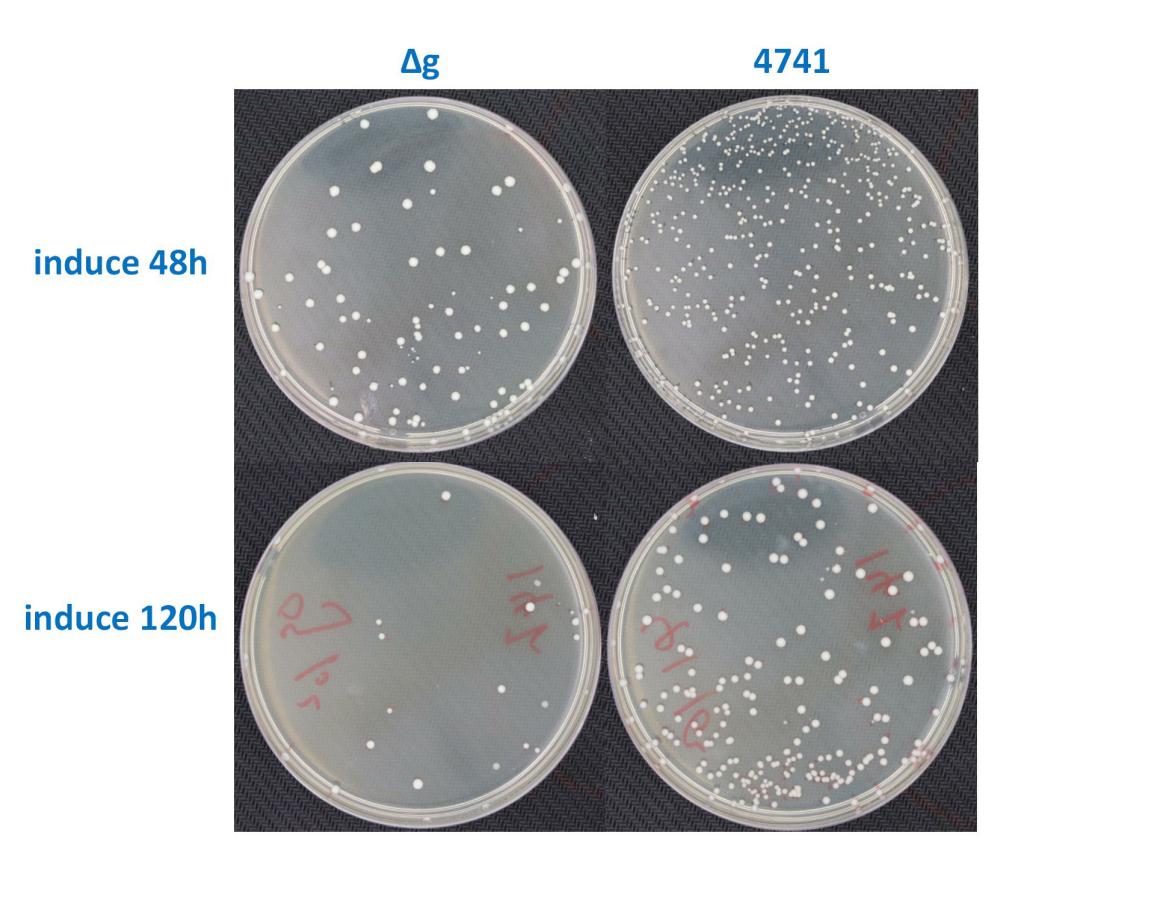 Exploration of the features of CREATE


To investigate whether cell morphology is affected when chromosomes are removed. 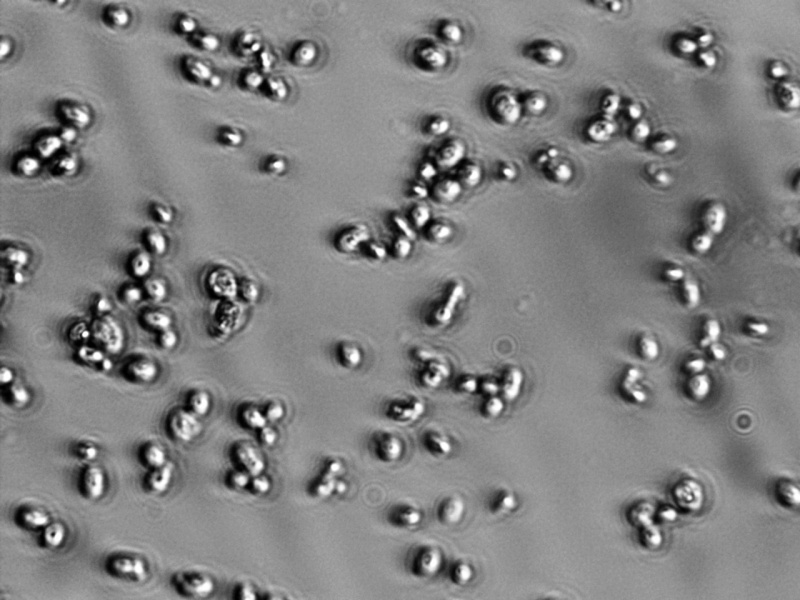 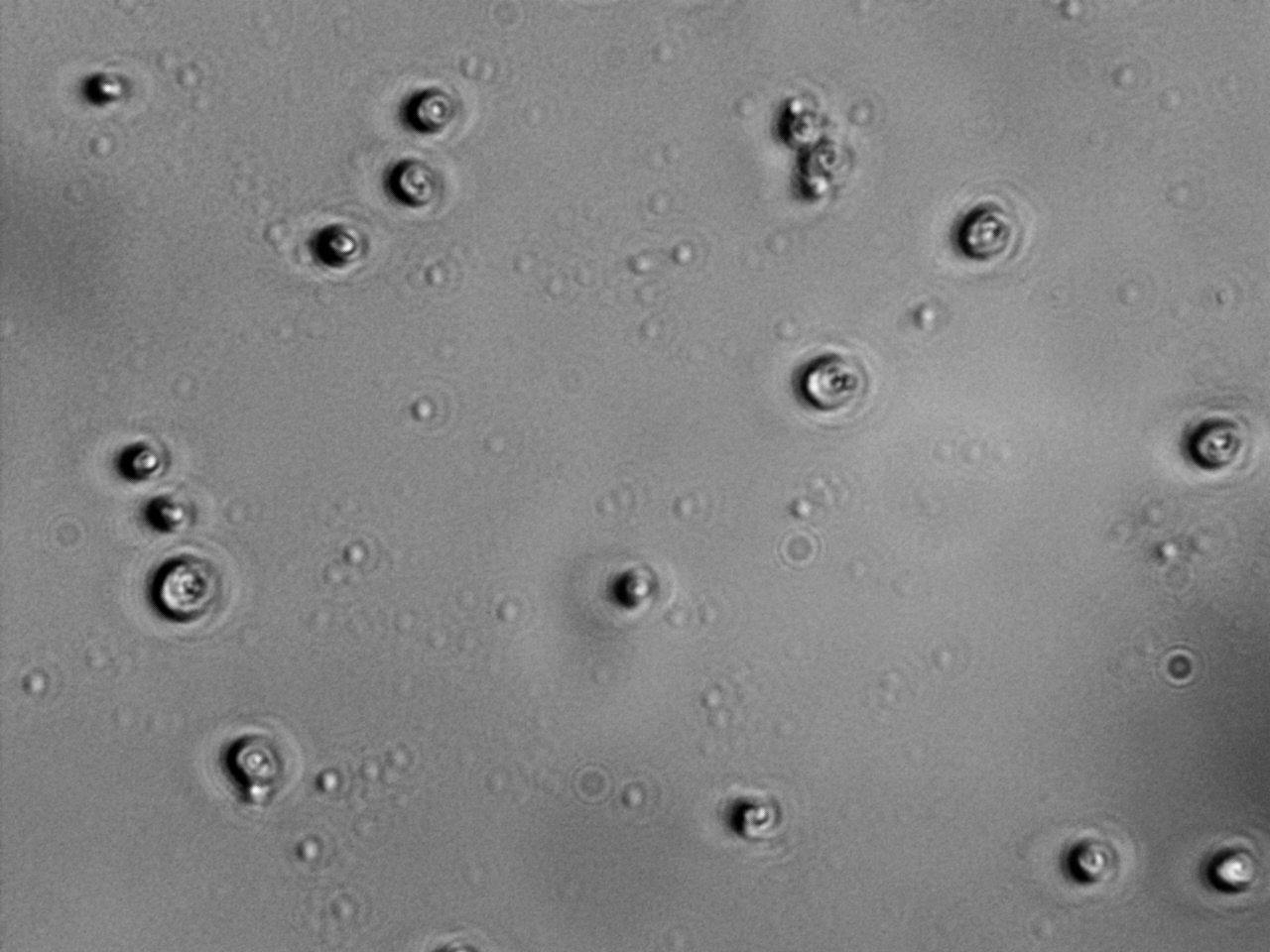 Compared to the control, no significant changes in cell morphology and size were observed in the experimental group, which indicates that even if the cells lose their chromosomes, the basic features of the cells will not alter within a short period.
Another result that can support this conclusion is that in experiments observe nfGFP signal when removing the GFP channel, and we can see that the morphological structure of cells without nfGFP fluorescence in vivo (CREATE) remains intact.

Click on this link to find a relevant image