One of our primary goals was to ease the use of the organism Leishmania tarentolae for the production of pharmaceutically important proteins. We therefore decided to introduce the Modular Cloning system to Leishmania, which is based on Golden Gate Assembly.

For this it is important to note that each organism has its own codon usage. This means that if you want to express a protein in a particular organism, you need to adapt the DNA sequence of the gene encoding your protein of interest to the codon usage of that organism. Here you can find the codon usage of Leishmania tarentolae.

In our project, we mainly focused on the expression of the receptor binding domain (RBD) of Sars-CoV-2. This was fused to a secretion signal (sAP), different fluorophores (mVenus, mCerulean) and purification tags (Strep8His/GST).

To this end, we had to remove BsaI recognition sites from the original plasmid pLEXSY_I-blecherry3 from Jena Biosciences. Since there were three BsaI sites in the original plasmid, we had to design six primers, forward and reverse, for each of the three sites. Each of these primers contained point mutations at the BsaI recognition site. PCR was used to amplify the altered fragments. Since sequencing showed that sequence stretches were missing in our final vector (they were extremely GC-rich), we decided to cut the erroneous sequence from the original vector and insert it into our domesticated vector. The problem with this, however, was that the only suitable restriction enzyme was dam methylation sensitive. Therefore, we first had to transform the vectors into a dam - E. coli strain. After purification of the plasmid DNA, we were able to cut the vector and insert the cut sequence into our domesticated vector.

A diagnostic digest was then used to demonstrate that the BsaI recognition sites were successfully removed. In addition, the LacZ gene was inserted using traditional cloning to enable blue-white screening.

Parallel to the domestication of our expression vector, we designed different L0 parts. It was important to pay attention to the correct codon usage and to adjust the overhangs for the correct cloning position. We obtained different parts either through designing the sequence and having it synthesized or, for smaller parts, we performed a PCR on parts existing for Chlamydomonas reinhardtii and simply adjusted the overhangs to fit our cloning position. Chlamydomonas has a similar codon usage as Leishmania tarentolae.

To clone a desired L0 part, it was ligated into a suitable destination vector using MoClo, which results also in deletion of the LacZ gene present in that vector. The enzyme BbsI was used for this purpose. The resulting vector was transformed into E.coli and selected by blue-white screening. An overnight culture was prepared from the positive (white) E.coli to produce sufficient plasmid. Plasmid DNA was then isolated and test-digested to verify correct cloning of the L0 part.

After successful construction of the vectors containing the L0 parts, L1 vectors combining various L0 parts were produced. For this purpose, the desired L0 parts and the destination vector were digested with the enzyme BsaI and ligated, with the specific overhangs allowing assembly of the parts in the desired order.

Subsequently, the obtained plasmids were transformed into E.coli. Using blue/white selection, colonies harboring successfully assembled L1 vectors were identified and grown in overnight cultures. After plasmid preparation, they were test-digested, again propagated in E. coli, purified, and given to the Leishmania team for transfection.

Testdigest with SacI of the original pLEXSY_IE_bleCherry_3, weird plex and various L1-constructs.
Evidence for successful transfection (a) Gel electrophoresis for the detection of BleCherry marker and reporter genes. PCR products obtained on DNA extracted from Leishmania cells (1) untransfected original culture, (2) transfected with pLEXSY_I-blecherry3, (3) transfected with Lt UCAS pTB007. Left: PCR amplifying the ble cassette. The plates of (b) + (c) show colonies of Leishmania transfected with pLEXSY_I-blecherry3 after induction with tetracycline, (d) is a plate with untransfected Leishmania cells supplemented with tetracycline. Next to it is an Eppendorf tube containing purified mCherry.

The agarose gel shows that PCR on DNA extracted from Leishmania cells transfected with pLEXSY_I-blecherry3 gives rise to a band at about 340 bp. Our primers were designed to bind to the Bleomycin resistance gene, which should result in a size of the amplified DNA of 349 bp. Another primer set was designed to bind to a gene in the genome, for which the amplified DNA is supposed to have a size of 920 bp. These results confirm successful transfection.

However, since this only confirms successful transfection, not successful protein production, we performed Western blots with proteins from cultivated Leishmania cells harboring our different constructs before and after induction with tetracycline. 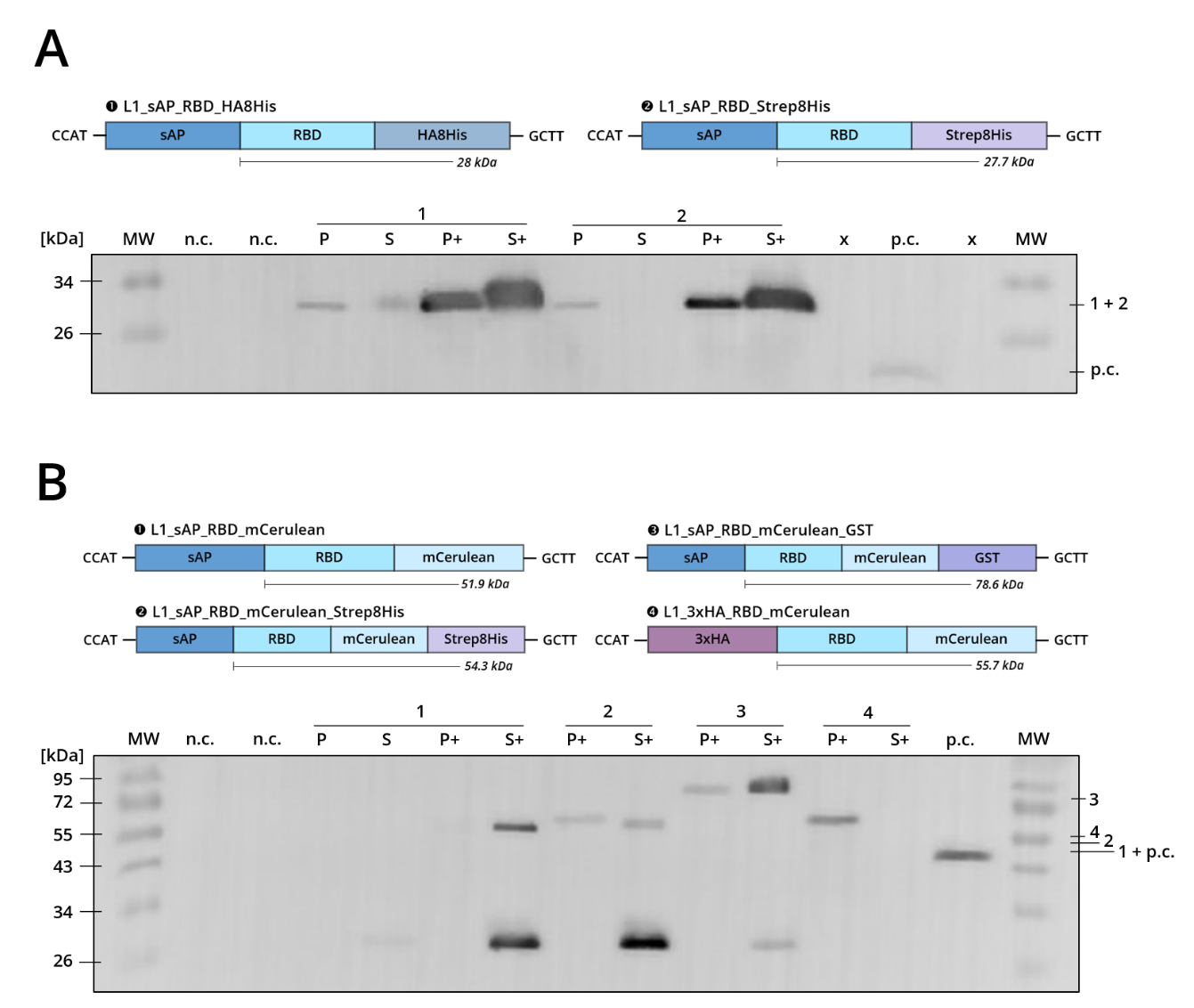 The western blots show the signals expected for the RBD, which allows us to conclude that all transfections were successful.

Since we wanted to not only detect but also purify our protein, we grew cultures with larger volumes (50-500 ml) and induced them with tetracycline prior to affinity chromatography. 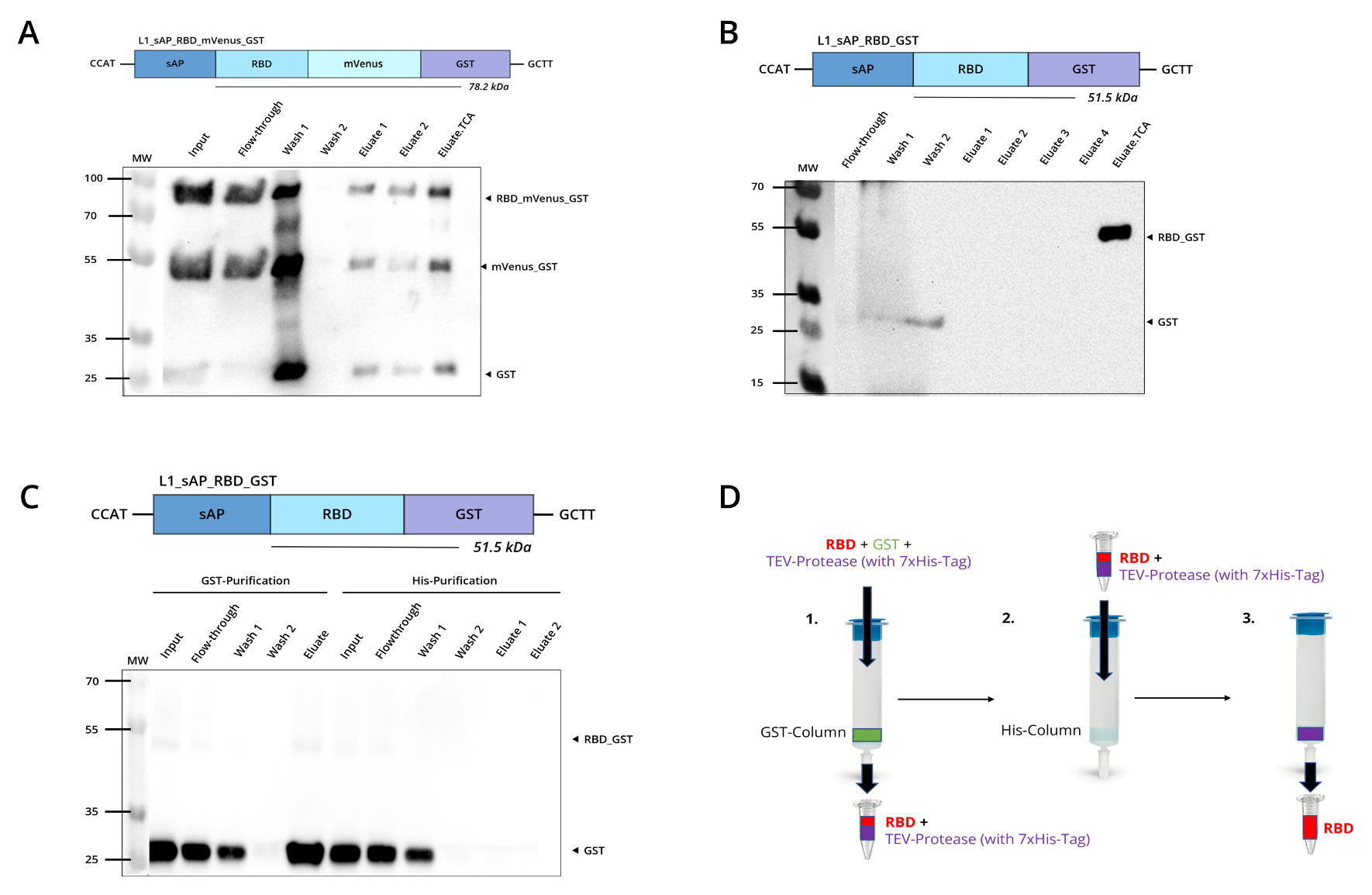 Western blots showing successful purification of proteins expressed in Leishmania a) Western blot stained with GST antibodies of proteins purified from the supernatant of cells harboring construct L1_sAP_RBD_mVenus_GST. Here we see that both GST and mVenus+GST were cleaved from the RBD to some extent. This might be due to proteases present in Leishmania. b) Purification of the GST-tagged RBD with Glutathione-Sepharose affinity chromatography. The eluates from (a) were loaded onto a Glutathion-sepharose column and samples were taken from flow-through, wash and four eluate fractions. A mix of all eluates was precipitated with TCA (Eluate TCA). Samples were analysed using SDS-PAGE and Western blotting. The blot was stained with antibodies against the RBD. c) Application of the scheme shown in d) with medium obtained from cells harboring construct L1_sAP_RBD_GST. c) Scheme for the production of pure RBD. First, the RBD-GST protein is run over a column that binds GST. TEV protease is added, which cleaves the GST tag from the RBD, while GST remains on the column. Subsequently, to separate the TEV protease containing a 6-His tag from the RBD, the mixture was run over a nickel affinity column, which binds the 6His-tagged TEV such that pure RBD is in the supernatant.

But not only were we able to purify our RBD_GST but also show that it probably is functional, because we did one successful activity assay. 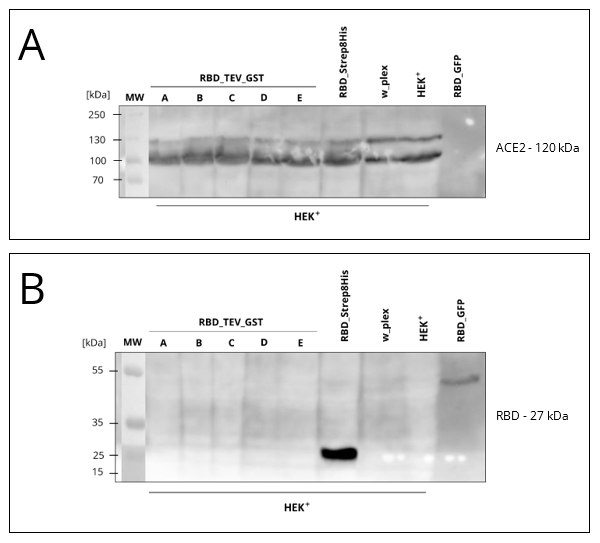 The visible band for RBD 27 kDa shows that our RBD binds to the ACE2 receptor. In addition to the detection via Western blot, we could also show the binding of our RBD_mCerulean to the ACE2 HEK-cells via flourescence microscopy. Since there was only one try for those activity assays, this is only preliminary data!

Finally, we can see that our project to establish the MoClo system in Leishmania was successful. We were able to domesticate an expression vector for MoClo, build several L0 parts for secretion, detection and purification, to express proteins of interest in Leishmania, and then to purify them. Also our first tries of activity assays hint to a functionality of the RBD.