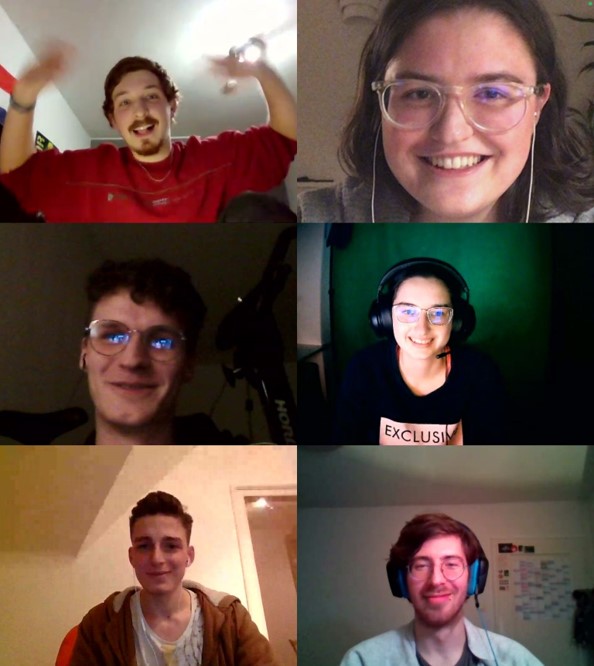 On March first iGEM Bonn contacted us and asked for help regarding sponsoring. Since we got support from our advisors, we sent out a sheet with all the important information on how to acquire sponsors. Since it was the first other iGEM Team we were in contact with, we decided to ask them if they were interested in cooperation. They were and so we scheduled our very first meeting via Zoom. There were a few people from each team, and the first thing was to introduce ourselves to each other and also give a quick overview about our projects. We left the following brainstorming sessions with two big ideas:

A Science Slam and an online – biology-themed Escape-Room. After talking to our teams, we split the tasks up and had one team for organizing the Science Slam and one for the Escape Room, each consisting of people from both teams.

In regular meetings, every 2 weeks, we discussed the whole organization and had a lot of fun with funny stories from the lab of each team.

For the science slam iGEM Bonn already had a list of Slammers that they already knew from their Science Slams the years before. We added our Slammers from the TU Kaiserslautern and then we were ready to start. We sent out a mail to each slammer, asking if they were interested in participating. While waiting for their answers, we planned on how we want to hold the virtual Science Slam. We ended up deciding on twitch because some people already had experience using this platform. In total we had eleven meetings where we planned the schedule for the Science Slam, talked about how we can promote it properly, and drafted press statements. Two weeks prior to the science slam we had a meeting with all the slammers that were interested in testing the technical stuff and talking about the schedule once more. Everything worked perfectly fine, so we were ready to go. You can read more about the event here.

Inspired by the great meetup we attended, which was organized by iGEM OSU, we decided to host another meetup for all the German iGEM Teams. We wanted to facilitate the communication between different teams and also get them to meet each other and give all of us the chance to establish more collaborations or even partnerships. After deciding on a date, we brainstormed what topics we wanted to talk about and chose 3 topics and divided the topics between the team members. Everyone prepared the topics for the rooms. We didn’t want to have only iGEM related topics so we decided to invite a speaker from Uni Bonn, who gave a talk about “Sugars of the future – the biotechnological production of healthy sugar substitutes”.
We promoted our meetup via social media and invited all the German teams. Our post on social media was also seen by Promega. They like the idea and want to help us out with a little sponsoring but since we didn’t need any financial resources for the online MeetUp we agreed on a gift package which we could raffle between the attending teams. Everything was prepared and we had confirmed participants. You can read more about the event here.

Another of our ideas was done in cooperation with not only iGEM Bonn, but also together with iGEM Aachen and iGEM Düsseldorf. The first meeting with them was only to check if someone had any experience with creating online Exit Games. Since no one had, some people shared their experiences with playing online Exit Games. The next steps were to talk about the story line and the format, where we decided on riddles that were not only solvable for biologists or iGEM teams but also for people with less or no scientific background. We want to present some parts of our project to the people and give them the chance to learn a little about biology while still having fun.

After the storyline was written, each team took photos for their part and created the riddles for their scenes. As a format a simple google form was chosen, since it does not require any specific program or skills to use. After creating our parts of the story and testing it, in a last meeting we talked about how to merge the different parts. After putting it together, it was ready to go online. You can find our Escape Room here.

With our survey we wanted to find out about the opinions of people around the world on genetic engineering, as we felt it differs from country to country very much. What better way would there be to reach as many different people as possible, than asking the iGEM community for help. This is why we created a collaboration request, where we asked all the other teams to spread our survey around their country, their university, their friends and family. Unfortunately we didn’t get enough samples from outside Germany, and therefore were not able to draw a conclusion on the comparison between different nations, but we still learned a lot especially about the German views on genetic engineering. You can find our results here.

Apart from the above mentioned Collaborations where we were responsible for the organisation, we also contributed to collaborations that were organized by other teams.
We took part in the iGEM Düsseldorf postcard Collaboration, the virtual lab gallery of iGEM Hamburg. We also attended the international iGEM MeetUp organized by iGEM Ohio State University. In iGEM Maastrichts VectorJournal, you can also find our paper that we wrote for their collaboration. Nawi Graz also invited us to be part of their podcast and also took the chance to invite them for one episode of our own podcast.