Proteins are needed for a wide range of applications, e.g. in industry, pharmaceuticals and medicine for the production of food, cleaning agents and therapeutics such as insulin. For a long time, these proteins were obtained from animals, but now many proteins can be synthesized in the laboratory using microorganisms, which guarantees safer, more streamlined and cheaper production.

Biotechnology is taking advantage of the production of proteins in microorganisms. As technological development advances, more and more organisms are being genetically engineered to express the desired proteins. There are many conventional organisms for this conversion, including Escherichia coli, insect and yeast cells.

But especially when it comes to therapeutic protein production, these organisms also have some disadvantages. For example, their glycosylation patterns, which may render these proteins non-functional in humans.

This is where our project comes in.

Our goal is to establish an efficient system for protein production in a microorganism that has similar glycosylation patterns to humans. - Leishmania tarentolae.

The inspiration for this project came from our professors Dr. Michael Schroda and Dr. Marcel Deponte. Prof. Dr. Michael Schroda works in his department with the Modular Cloning (MoClo) System using the model organism Chlamydomonas reinhardtii and Prof. Dr. Marcel Deponte works in his department with Leishmania. Since the production of proteins is becoming increasingly important in industry and medicine, we decided together in joint brainstorming sessions that we wanted to establish the MoClo system in Leishmania. We chose the expression of the receptor-binding domain of the SARS-CoV-2 spike protein as our target, since it is a glycoprotein.

MoClo is a kind of building block system. It enables the simple assembly of various DNA building blocks into a fully functional gene. This can then be introduced either individually or in combination with other genes into the organism to be engineered. 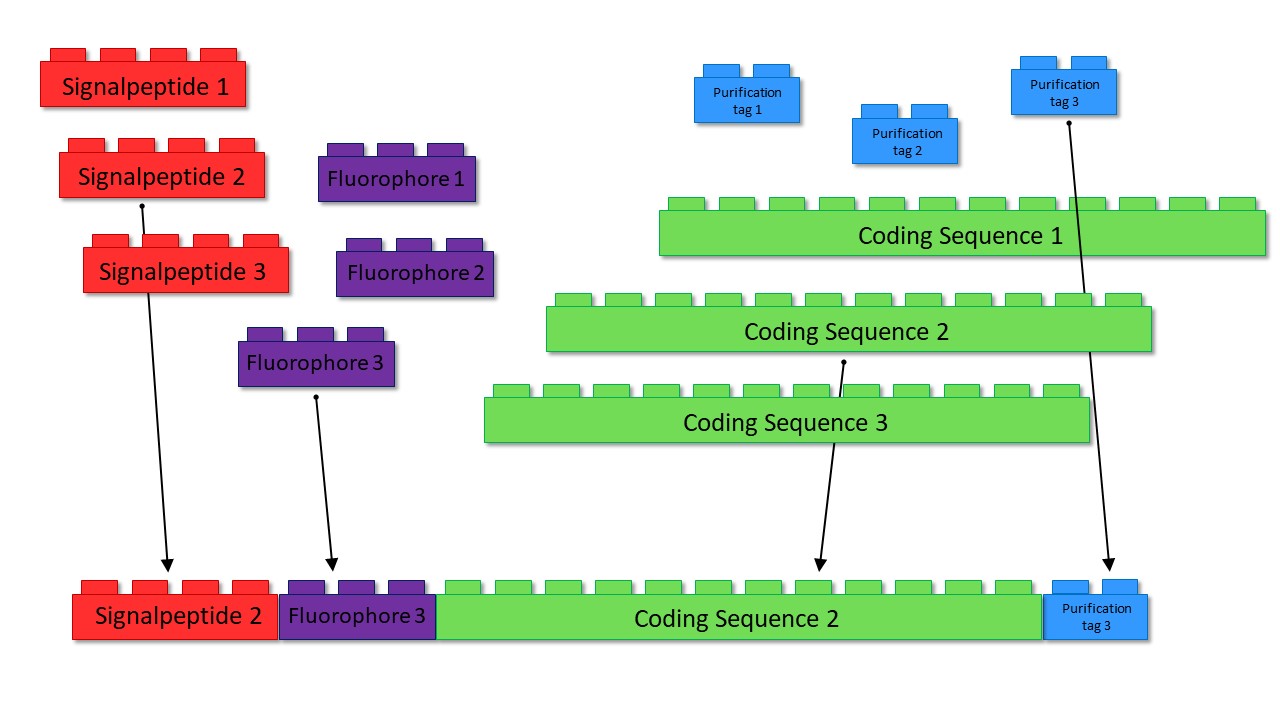 MoClo is based on the Golden Gate assembly developed in 2008 by Marillonet et al. [2] This method uses type II S restriction enzymes, which cut DNA at a precisely defined distance from its recognition site. The cut then results in predefined overhangs on one of the two DNA strands, known as "sticky ends." 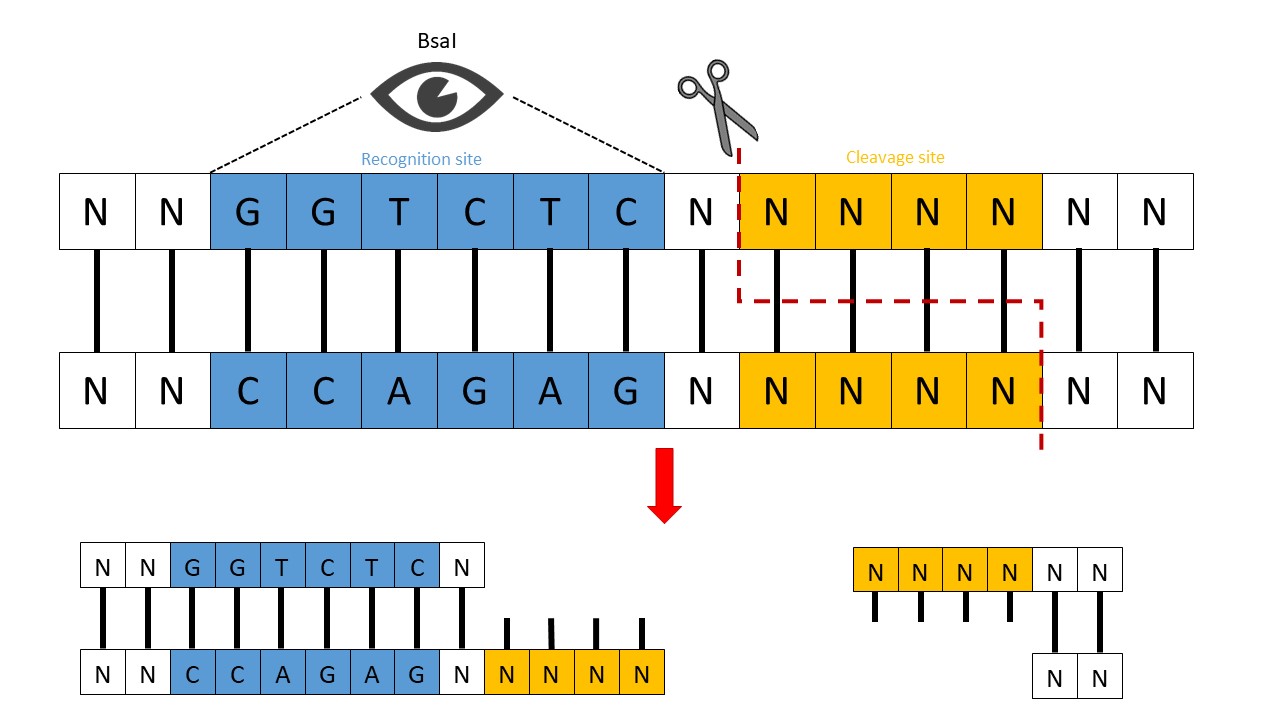 This ability is exploited in MoClo in two important ways. Once the desired module (e.g., a promoter) that will later be part of the gene is designed, it is treated with the restriction enzyme. Since the cleavage site is not identical to the recognition sequence of the enzyme, the recognition sequence itself, if used skillfully, can be eliminated so that it is no longer present in the final product.

In short, once the module is inserted in the right place, it cannot be removed by the same enzyme.

The advantage of this process is that release of the designed modules from their source vector and insertion into the target vector can be done simultaneously in one reaction, and the reaction is massively "pushed" toward the desired product.

The second point that makes MoClo truly modular is the ability of the enzyme to always cut at the same distance from its recognition sequence. If you know the distance at which the cut is made and the length of the resulting overhang, you can design the bases present in the overhang.

The advantage of all this: When you set up this system for a particular organism, you define standardized genetic parts. Once you have completed your catalog of genetic parts, you can assemble them into entire genetic circuits in short time.

The genetic parts, can be reused at any time for new constructs and combined with newly added ones from your or another laboratory given that they adhere to the same standard. 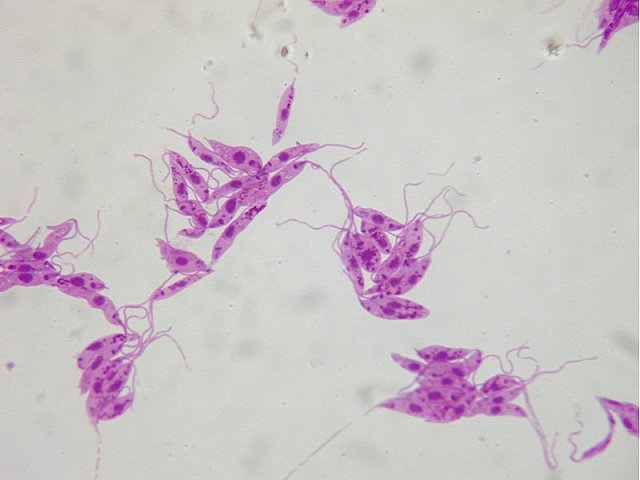 As mentioned earlier, our organism of choice is Leishmania tarentolae, which belongs to the protozoan family. As obligate parasites, Leishmania are dependent on their host and usually undergo host switching during their life cycle.

They usually first infect a mosquito, whose saliva allows them to invade secondary hosts such as sheep, reptiles, or humans. Once the Leishmania have reached their final host, they multiply in certain blood cells and sometimes cause considerable damage to the host.

The infectious disease caused by Leishmania is called leishmaniasis, and it is common in tropical regions. However, the strain of Leishmania that we use in the laboratory, Leishmania tarentolae, is not pathogenic to humans.

Cultivation of Leishmania is quite simple, as they can be grown in liquid medium, much like bacteria. However, the major advantage of Leishmania that makes them so valuable for biotechnology is that the glycosylations made by Leishmania are similar to those of humans. Therefore, human-like glycosylated proteins can be produced in the protozoa with high accuracy. Moreover, it is possible to produce particularly large proteins in Leishmania, which often fails in other laboratory organisms.

In our project, we are focusing on the expression of the receptor binding domain (RBD) of SARS-CoV-2 in Leishmania using the MoClo system, which is important for research because the RBD can be used to perform various experiments that will allow a better understanding of the coronavirus infection process. In addition, it may be used to produce a protein-based vaccine.