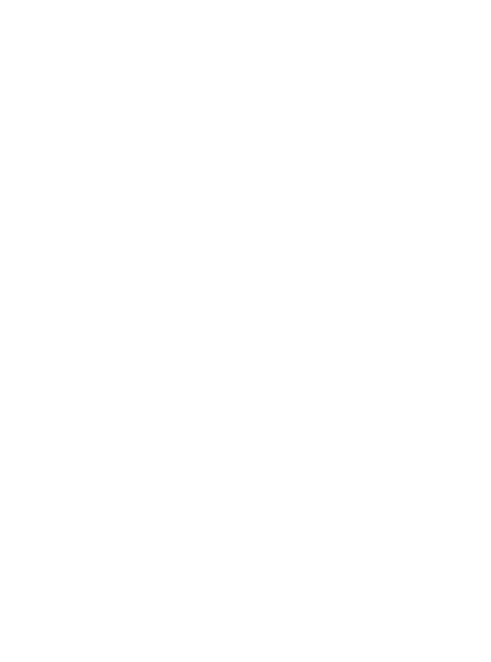 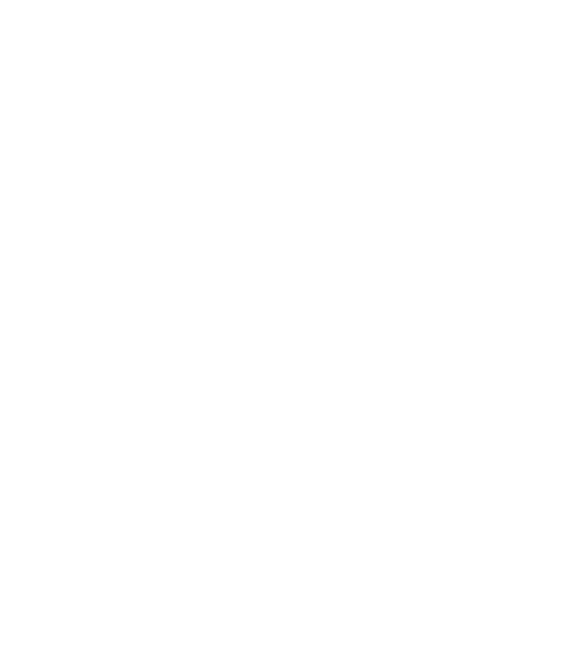 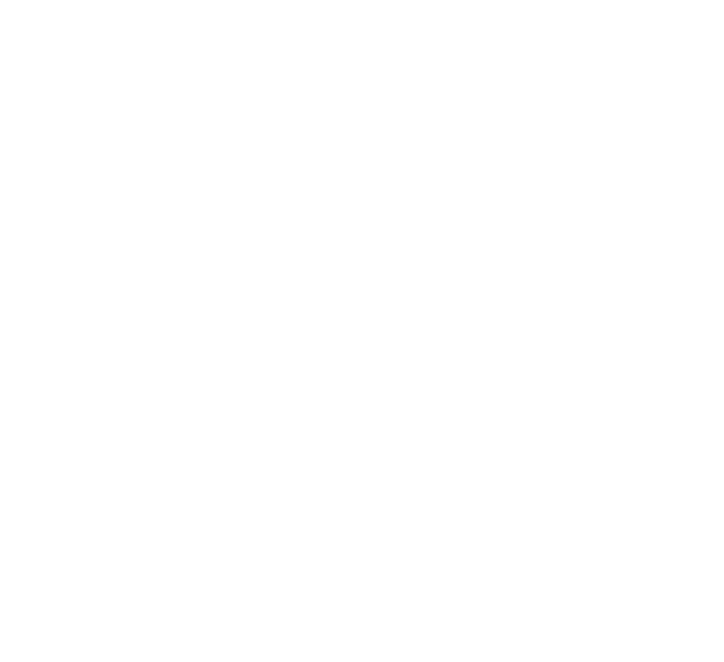 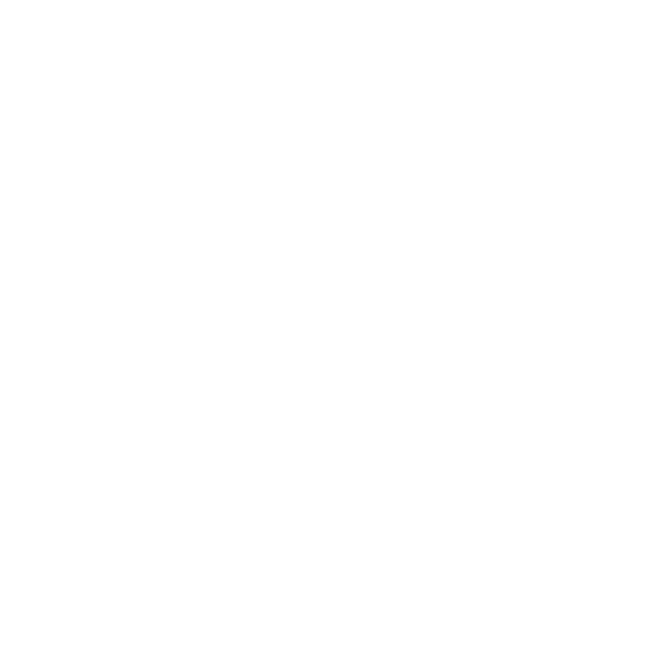 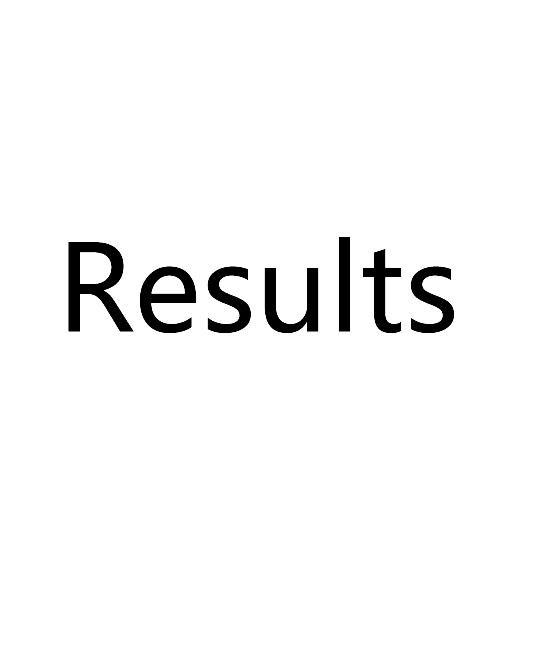 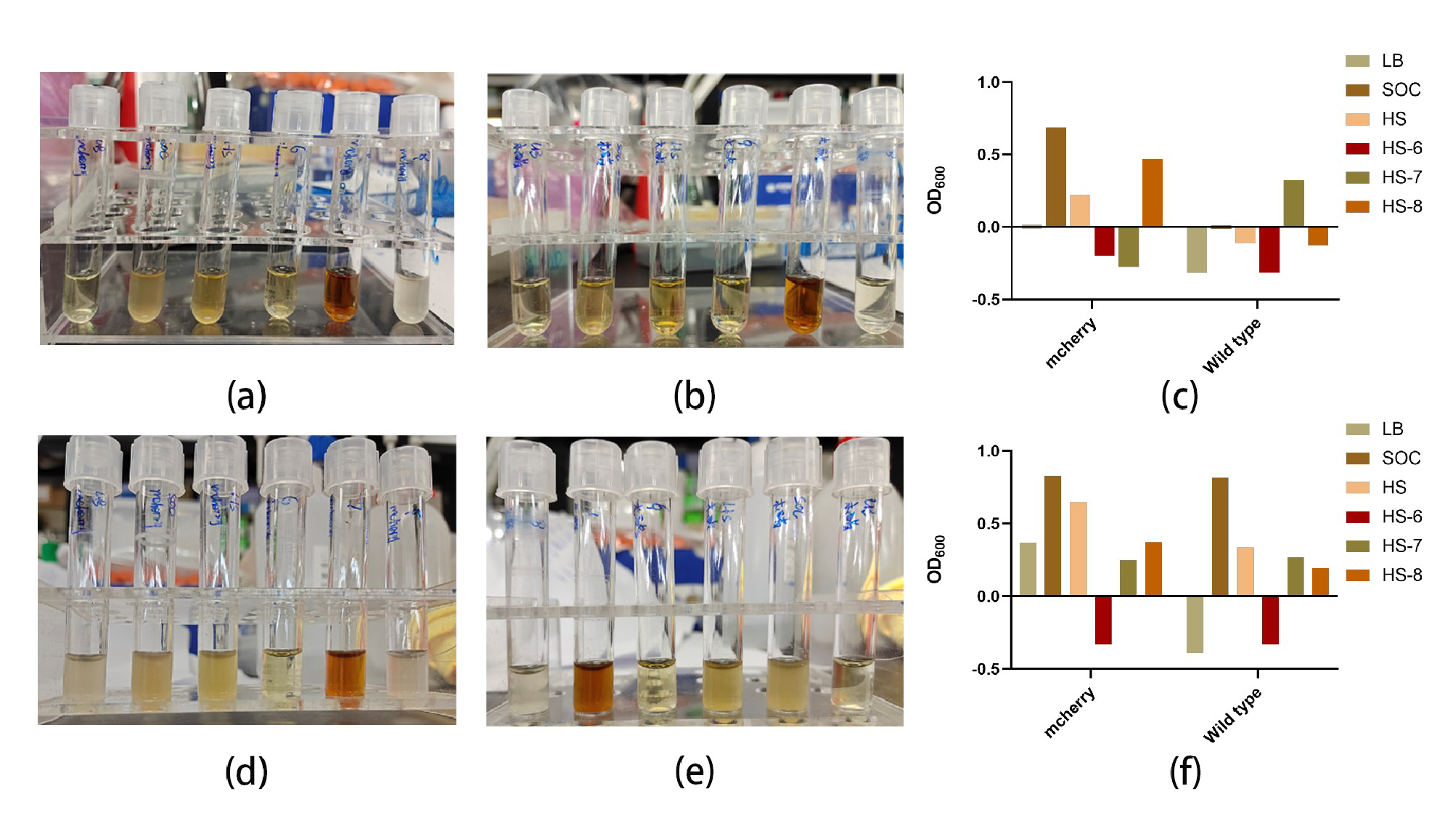 Figure 2. (a) Visualization of bacterial cellulose production in 2mL, 2.5mL and 3mL of HS and SOC medium after 4 days of fermentation in 12-well plates, (b) Quantification of the bacterial cellulose dry weight.
3. Eletrotransformation condition exploratory experiment
In order to optimize the transformation efficiency of plasmid into G. hansenii ATCC 53582, we conducted electroporation assay with the different voltage values, either 2.5kV or 3kV. A larger amount of bacterial transformants can be found on selective plates in the 3kV-treated group. Therefore, we chose 3kV to perform the electroporation of G. hansenii ATCC 53582 with plasmids in the following experiment.
4. Illumination intensity exploratory experiment
During the consult to the experts( For more detail, please click Human_Practices), suggestions were made to explore the effect of details intensity on G. hansenii ATCC 53582 product BC in the NIR light intensity in the c-di-GMP signaling and BC film production module. Then we cultured respectively J23100-bphS-J23109-fcsR-pSEVA331-G.hansenii ATCC 53582 under 5， 10， 20， 50μW/cm2. The yield under 5, 10, 20, 50 μW/cm2 illumination intensity had no significant difference. Therefore, we still chose 50μW/cm2 for film production experiment. 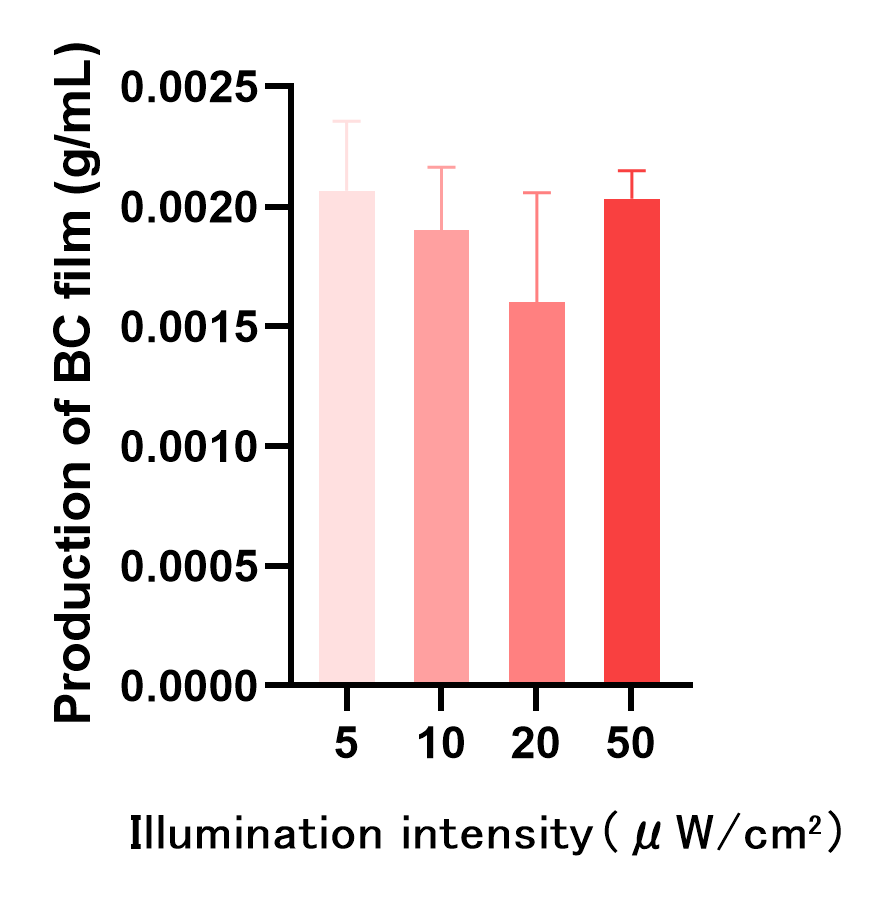 Figure 3. The BC yield at different illumination intensity
● Antipseudomonal drug production module
1. Goal
The function of this module is to produce a chimeric bacteriocin that can target Pseudomonas aeruginosa while having a broader antipseudomonal spectrum than pyocin S2. To enhance the antipseudomonal effect, we further engineered the RBS strength to modulate the expression of SE protein.
2. What work we have done
① Verify that the SE fusion protein has an antibacterial effect on P. aeruginosa.
② Successfully construct a series of plasmids to express different levels of SE protein.
③ Through the inhibition zone test and growth curve test, screen G. hansenii ATCC 53582-derived strains with a pronounced antipseudomonal effect.
3. Proof
3.1 Antipseudomonal properties of SE protein
IPTG was added to a final concentration of 0.1 mmol/mL to induce SE protein expression in E. coli BL21 with S2-PET28A or SE-PET28A at 25℃ for 12 hours. Supernatant containing SE or S2 proteins were obtained by sonication and centrifugation. The crude protein extract was loaded into SDS-PAGE gel and stained by Coomassie Blue to verify the presence of target proteins ( For more detailed steps, please click Experiments). After IPTG induction, S2-PET28A-BL21 produced a 83.9 kDa protein (lane 2) while SE-PET28A-BL21 produced a 81 kDa protein (lane 3). In contrast, non-induced E. coli BL21 cells did not express S2 or SE protein (lane 1, lane 4). The results showed that the constructed plasmids S2-PET28A and SE-PET28A could be used to express the fusion protein (Figure 4. a).

Then, supernatant containing SE or S2 protein was respectively added into the culture of Pseudomonas aeruginosa PAO1, P. aeruginosa PAO1 Δ1150-1151（PAO1 Δ1150-1151）and E. coli MG1655. PBS was used as a negative control. Inhibitory effect of supernatant on the P. aeruginosa growth was determined by measuring OD600 using SYNERGY H1 micro-plate reader. The result showed that the SE-fusion protein could prevent P. aeruginosa growth, irrespective of the presence of the PA1150-1151 region, while pyocin S2 can only inhibit the PAO1 Δ1150-1151 mutant, but not the wild type strain. In addition, both SE and S2 proteins had no effect on E. coli growth (Figure 4. b). 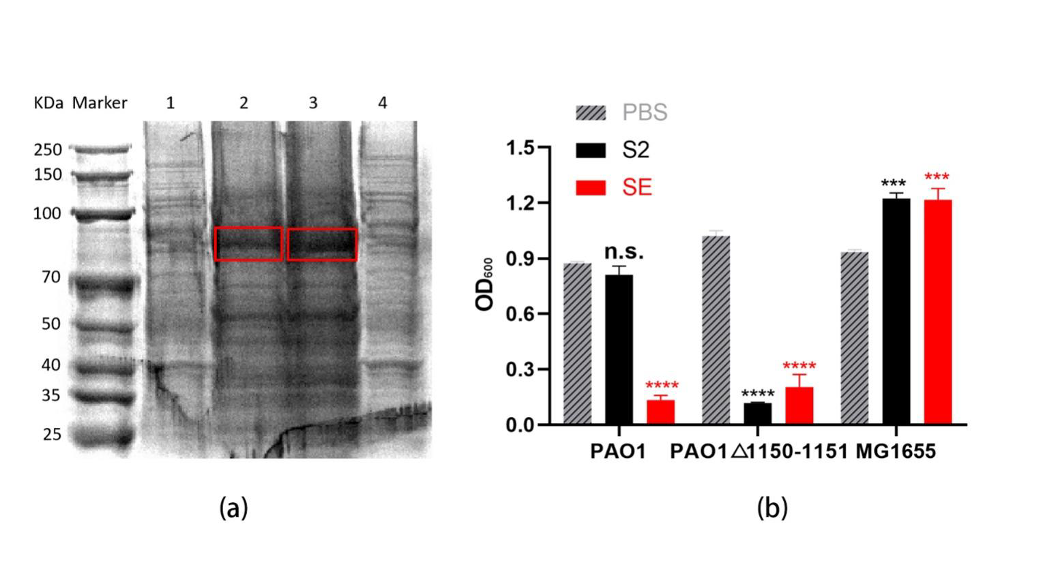 Figure 4. (a) SDS-PAGE analysis of protein expression in engineered E. coli. Lane 1 S2-PET28A BL21 without IPTG induction, lane 2 supernatant of S2-PET28A BL21 with induction by 0.1mmoL/mL IPTG, lane 3 supernatant of SE-PET28A BL21 with induction by 0.1mmoL/mL IPTG, lane 4, SE-PET28A BL21 without IPTG induction, (b) Optical density of bacterial culture of PAO1, PAO1 Δ1150-1151 and E. coli MG1655 treated by the supernatant of S2-PET28A-BL21 or SE-PET28A-BL21 lysate for 790 minutes. PBS was used as the negative control.
3.2 Screen and identify an RBS to express SE protein with an optimal antipseudomonal effect.
Using high-throughput screening, we engineered the strength of RBS that control the SE protein expression level in E. coli, and the resultant plasmids were extracted and in turn introduced into the G. hansenii ATCC 53582. G. hansenii ATCC 53582 culture supernatant containing SE proteins that were expressed under control of different RBS were obtained by sonication and centrifugation and further purified by infiltration with micro-pored membrane. Then, supernatant in different groups was individually mixed with PAO1 culture, and incubated at 30℃ for 12 hours. SYNERGY H1 micro-plate reader was used to measure the OD600 to determine the effect on PAO1 growth. As shown in Figure 5 a, supernatant of culture derived from the 3rd, 4th, 7th, 8th colony had significant antipseudomal effect.

3 μL of the supernatant containing SE protein was dropped on FAB plate with PAO1 evenly spread (for more detailed steps, please click Experiments). Then, the plates were incubated at 30℃ for 12 hours. Supernatants from all the G. hansenii isolates have formed inhibition zone, yet with different sizes. Isolate 3rd and 4th displayed the most significant antipseudomonal effect. The results of the optical density measurements of PAO1 growth and the inhibition zone prove that SE protein is successfully expressed in the engineered G. hansenii. A series of G. hansenii containing the SE expression module with difference RBS were constructed to screen for the strain with the best antipseudomonal property. As shown in Figure 5, the 4th strain pR-RBS300-SE-J23118-IMM-pSEVA331-G. hansenii ATCC 53582-4# is best as it has the largest inhibition zone area.

Figure 5. (a) Optical density of PAO1 treated with the supernatants of different bacterial strain lysates cultured after 12 hours of growth in PBS, (b) Drop plate assay to check the inhibitory effect of SE proteins on Pseudomonas aeruginosa PAO1, (c) Strains used in Figure (b).
● C-di-GMP signaling and BC film production module
1. Goal
As bacterial cellulose (BC) production in G. hansenii is regulated by the second messenger c-di-GMP. Therefore, we aimed control BC film production by regulating c-di-GMP concentration, i.e. so that G. hansenii ATCC 53582 can produce BC under illumination of Near Infrared light (NIR light) at 680nm, but cannot under dark conditions.
2. What work we have done
① Construct the synthesis and hydrolysis modules of c-di-GMP in G. hansenii ATCC 53582.
② Screen the best modules for BC film production, and integrate them into one single plasmid.
3. Proof
We used bphS which is the coding part of the photo-activated diguanylate cyclase BphS as well as the coding parts of c-di-GMP phosphodiesterase from different bacteria to construct the plasmids for c-di-GMP synthesis module and c-di-GMP hydrolysis module in E. coli competent cells. Then the plasmids were extracted and transferred into the G. hansenii ATCC 53582.

Figure 6. (1) The genetic circuit for c-di-GMP synthesis module, (2) The genetic circuit for c-di-GMP hydrolysis module B, amplification of different regions by PCR, (c) Plasmids used in Figure B.
According to the 12-well plate test (Figure 7. A, for more detailed steps, please click Experiments), BC was dried and weighted. A marked difference in BC production between J23100-fcsR-pSEVA331-G. hansenii ATCC 53582 and our control group pSEVA331-G. hansenii ATCC 53582 was observed (Figure 7. B1). Therefore, J23100-fcsR-pSEVA331 was shown to have a marked hydrolytic function. On the other hand, J23100-bphS-bphO-pSEVA331-G. hansenii ATCC 53582 produced a higher level of BC under the illumination of NIR light than the dark condition (Figure 7. B2). Based on the above results, we chose BphS and FcsR as the c-di-GMP synthetase and hydrolase respectively in our system. 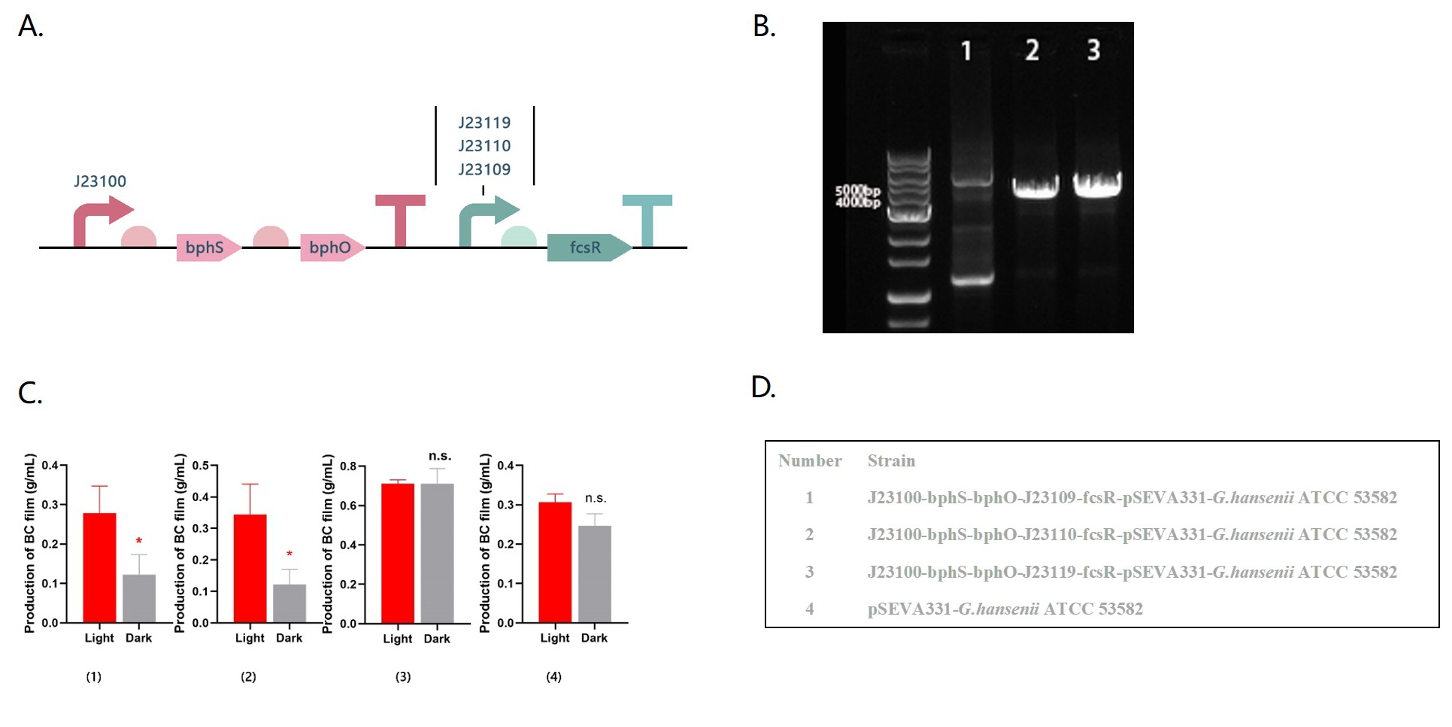 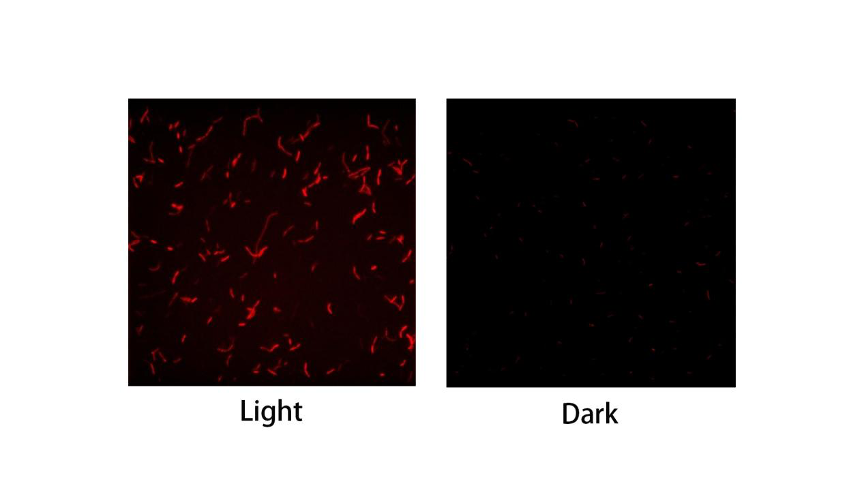 Figure 9. Red fluorescence photo of the pDawn-RFP-pSEVA331-G. hansenii ATCC 53582 cultured under 470-nm blue light or dark conditions for 24 hours.
3.2 Functional verification of lysis protein in G. hansenii ATCC 53582
We employed the blue light-responsive promoter pDawn to control the expression of different lysis genes, including S105, X174 E and LKD16 (Figure 10). Random primer-guided mutagenesis on the target RBS position was performed (BBa_B0034) ( For more detailed steps, please click Improvement). To verify the lysis effect of these components, we conducted the plate dot assay ( For more detailed steps, please click Experiments). Expression of lysis genes will be considered effective when bacterial colonies can grow normally in the dark, but not under blue light irradiation.

Figure 10. Genetic circuit for safety and drug release module.
To be specific, 20 single colonies on the culture plate were picked to spot on two parallel plates (if the number of single colonies on the culture plate is less than 20, picked all of them). The plates were incubated either in the dark or under blue light illumination for 24 hours to observe the colony morphology, based on which we determine whether there is a lysis effect.

Although the colony of S105 could not grow under blue light its growth state was abnormal in the dark. We attributed this phenomenon to a basal expression level of lysis protein controlled by pDawn promoter (Figure 11. A (a1), (a2)). Of note, the 4th isolate of with pDawn-X174 E-pSEVA331- E. coli grew normally in the dark but not under the blue light irradiation（Figure 11. A (b1) and (b2)）. Additionally, as shown in Figure 11. A (c1) and (c2), all the colonies of E. coli with pDawn-LKD16-pSEVA331- E. coli were able to grow under both conditions, whereas the growth of 4th, 9th,10th and 12th colonies was remarkably inferior than those in the dark, indicating that pDawn-LKD16 allowed bacteria to be lysed in response to blue light, yet with a modest effect. 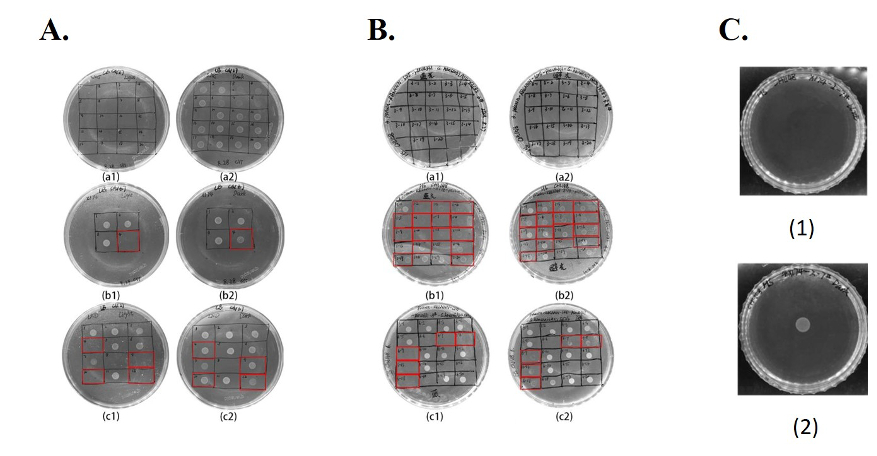