In the work of P. Cetnar et al, they construct 16 operons, each designed and inserted 5’ UTR sequences that contained between 0 and 40 polyA nucleotides, and used GFP as the report gene. During the characterizing experiments, they keep the promoter unchanged and maintain cells in the exponential growth phase for a long time period, so the changes in the mRNA levels can be primarily attributed to changes in mRNA stability[1].

For simplicity, here k is 1

Obtain the following data in the experiment

Table 1. length of ssRNA in 5’UTR affect the mRMA level

Considering that the length of the ssRNA sequence at 5’UTR is only one of the indicators to measure the stability of mRNA, in order to avoid the influence between different indicators, the obtained degradation needs to be dimensioned, that is, the relative degradation rate R is obtained.

According to the above model and experimental data[1], the following results can be obtained:

Table 2. mRNA stability based on the model (5’UTR)

Daniel P. Cetnar et al. carried out work similar to Part 1, constructing 16 operons and inserting 0-40 nt adenylate into the internal region of the gene. Similarly, after inserting the reporter gene, GFP, a series of characterization tests were performed.

According to the degradation rate model provided by the literature:

The meaning of each parameter is the same as in Part 1, where C , the activity coefficient is 0.018.

We can also have the relative degradation rate and relative stability

According to the above experimental data and model, the following results can be obtained:

Table 4. mRNA stability based on the model (intergenic region)

In the experiment of Daneil et al., it was found that the first three nucleotides in the 5'UTR affects the activity of the RppH enzyme, thereby affecting the degradation rate of mRNA. After constructing the cistron under the same experimental conditions as part 1 and 2 for characterization experiments[1], the following mRNA level data was obtained

Table 5. mRNA stability based on the model (first three nucleotides in 5’UTR)

Since the culture conditions of the experiment are the same as Part 1, the mRNA level is also only affected by the degradation rate of mRNA, so there is also a positive correlation between mRNA stability S’ and mRNA level T.

For simplicity, here k is 1

Therefore, the table data can be used as the relative stability value of mRNA.

After obtaining the RNA relative stability model under the influence of the three structural factors, which are 5′ untranslated region length, First Three Nucleotides in the 5′ Untranslated Region, Intergenic Region length, we plan to unify the three models into one model, so that the overall relative stability of the RNA can be estimated based on the various characteristics of the RNA.

Entropy is a measure of the uncertainty of the system state, which can be used to measure the information contained in the index data in the evaluation index system and determine the weight of each index accordingly.

Before using the entropy method to find the relative weights, we need to normalize the existing index data from 0 to 1. There are two formulas as follows.

First, calculate the weight of the jth indicator of the ith object:

Calculate the weigh of the jth indicator:

From this, we can get the contribution of the three structural factors

we have obtained all the data of the experiment[1] to measure the influence of three structural factors on RNA stability.

Part of the data is as follows:

In this modeling process, we choose to establish a multivariate linear model based on the data characteristics, and use Octave to calculate the linear regression. The ultimate goal is to make the following formula reach the minimum.

Calculated by Octave. The final result are as follow.

Two models are used to fit the experimental data respectively, and then compared with the actual data. The following figure is obtained: 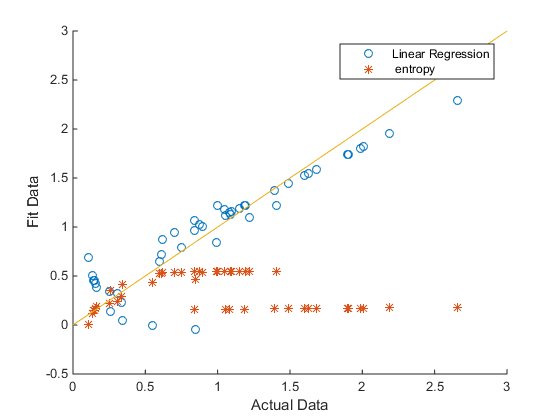 Fig 1 result of two models compared with the actual data
(* Is entropy method, ⚪ is linear regression)

It is clear that when the fitted data is less than 0.5, the entropy weight method has a better fitting effect; otherwise, the linear regression has a better effect.

So, the final model result we get is:

Previous studies have suggested that ribosomes can protect mRNA transcripts from RNase activity, possibly by covering RNase binding sites and limiting their accessibility[5][6].

Fig 2 Schematics illustrating how a mRNA’s translation rate controls the accessibility of RNase binding sites in an operon’s coding regions.[1]

In order to quantify the relationship between the translation rate and the decomposition rate of mRNA, we constructed a relevant model to simulate the process.

The key to modeling is to calculate how many bases are not covered by ribosomes and are exposed to the catalytic range of the RNase. Here, we designated α as the ratio of the ribosome’s translation initiation rate over its elongation rate over its elongation rate. We also designated F as the physical footprint of each ribosome in units of trinucleotides (amino acids). According to a TASEP (totally asymmetric exclusion process) model of ribosome dynamics that includes the ribosome’s footprint on the mRNA[7].

When translation initiation is the rate-limiting step (α is less than one), the steady-state ribosome density ρr is

According to the definition,

The relationship defined by eq illustrates how increasing a mRNA’s translation initiation rate results in higher ribosome densities, up until the maximum possible value.

Next, we define the unprotected distance between two adjacent ribosomes, the number of trinucleotides between the end of one ribosome and the beginning of the next ribosome. We call this unprotected RNA ‘hole’, so the hole density ρh=1-ρr. According to the TASEP model，the probability that a bound ribosome has m free trinucleotides.

We then determined the ribosomes’ average headway distance by calculating the first moment of the probability distribution in eq(c), using

According to the model, we model the following results 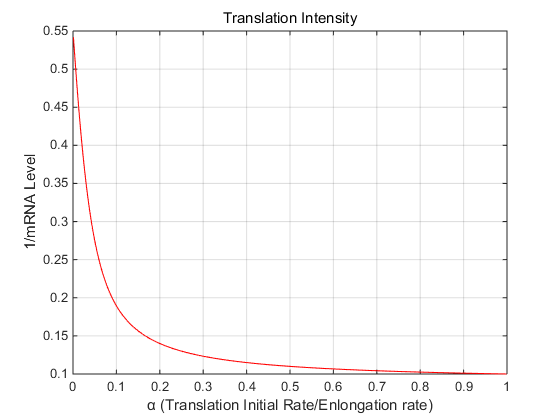 It can be seen that with the increase of translation intensity, the rate of RNA decomposition continues to decrease, verifying the hypothesis proposed in the literature[1].