With the rapid development of biotechnology and synthetic biology, the common chassis organism E. coli has become difficult to meet the needs of researchers for rapid experiments and mass production of proteins. Even researchers use E. coli as the preferred chassis organism for molecular experiments for its long application history. However, E. coli itself does not seem to have any outstanding characteristics. Compared to other microorganisms such as V. natriegens, it has a slower growth rate (20-30 min/generation) which limits the efficiency of molecular cloning experiments. The underproduction of protein limits its application in protein production. Also, using organic carbon as carbon sources makes it more challenging to isolate and purify other metabolites from plants. And E. coli cost more to culture, because more nutrients are required to grow than other microorganisms such as Pseudomonas taiwanensis. In addition, although E. coli can be cultured in media and colonized in humans, it is not a good choice for researchers who wish to use engineered bacteria in extreme environments such as dry soil or salty oceans.

Although scientists have been able to modify and improve the metabolic processes in microorganisms through various synthetic biology approaches [1], it is still an insurmountable obstacle to enhance the growth rate, tolerance, and carbon uptake capacity of E. coli. Therefore, more researchers are looking for novel chassis organisms that can break through this problem by the basic inherent properties of these organisms.

V. natriegens, which grow in large numbers in the ocean, are currently the fastest-growing non-pathogenic microorganisms in the world. It has a generation time of only 9.4-9.8 minutes when cultured in Gram's composite medium [1], which is half of E. coli’s. This high growth efficiency can significantly shorten the experimental period and allow researchers to obtain results more quickly. In addition, ribosomes of V. natriegens can reach 115,000 in a single cell during the exponential growth phase, compared to 70,000-90,000 ribosomes in E. coli [3], which allows V. natriegens> to have a higher capacity for protein production. Also, its high growth rate can shorten the culture time and significantly save the cost of cultivation and maintenance of microbial growth for protein production. Researchers have introduced 7 types of more than 100 target genes into V. natriegens and E. coli. Surprisingly, most recombinant proteins could be expressed in V. natriegens without optimizing the optimal growth conditions, and more than 20 genes were even more effectively expressed in V. natriegens. The expression of N-acetyl amino acid racemase, isopentene synthase and ribonucleoside diphosphate kinase in V. natriegens was respectively 2.6, 5.2 and 12 times higher than that in E. coli [4], confirming the potential of V. natriegens as a novel cell factory. Moreover, if we consider the future use of chassis microorganisms in extreme conditions such as arid soils and high salinity oceans, V. natriegens, which has evolved over millions of years to adapt to these environments, would be a suitable choice.

The sequencing of the V. natriegens was completed in 2013 with a size of 5.16M bp. 4,578 coding sequences, 11 rRNA manipulators and 129 tRNA-coding genes have been annotated [5-6]. Many genetic parts have also been characterized in V. natriegens, such as some basic constitutive promoters, ribosom binding sites, and terminators [7]. Meanwhile, it has been shown that some common induced promoters can function in V. natriegens, such as the IPTG-induced LacUV5 and trc promoters, the arabinose-regulated araBAD promoter, the temperature-regulated phage pR promoter, and the tetracycline-induced Tet promoter, which allows protein expression in V. natriegens to proceed in a controlled form [7,8]. Plasmids from different origins (e.g. p15A and pMB1) carrying resistance genes for chloramphenicol, tetracycline, ampicillin or kanamycin can be well replicated and maintained in V. natriegens [2,7,8]. In addition, V. natriegens can also take up exogenous DNA fragments by natural transformation, chemical transformation, and electrotransformation [2]. Furthermore, only 10 ng of fragments are required to enter V. natriegens successfully by electrotransformation [5]. These results demonstrate that V. natriegens can be used for routine molecular cloning experiments. Moreover, with its fast growth rate and high protein yield, it is expected to be developed as a new chassis organism.

..
..
2. Construction of CRISPR System Will Contribute to Further Development of Vibrio natriegens as A Chassis Organism

Although Vibrio natriegens have high growth rates, high protein yields, and a wide range of growth environments, they have not been able to replace traditional E. coli as a novel chassis organism due to insufficient research. Researchers still need to further research and modify it, such as testing more components and protein expression systems, exploring the optimal growth environment and the optimal concentration of various antibiotics and inducers. In addition, some logical routes commonly used in synthetic biology have not yet been established, and some gene regulation tools such as ZFPs and TALENs have not yet showed satisfactory results. These make it has not yet laid the foundation to become a chassis organism.

The CRISPR (clustered regularly interspaced short palindromic repeats) system is an emerging gene editing system that allows gene editing of target DNA under the guidance of a segment of RNA. It is more efficient and less costly than other gene editing tools such as ZFPs and TALENs, which has been widely used for gene editing and regulation in prokaryotes and eukaryotes [9]. Cas are the key components of the CRISPR system, which bind to crRNA and cleave the target DNA strand. Cas that have lost their nucleic acid endonuclease activity are called dCas, which can still bind to the target DNA strand and act by recruiting other transcription factors to repress or activate transcription of the target gene. The former is called CRISPRi (CRISPR interference), where the dCas recruits transcriptional repressors to block downstream gene expression. The latter is called CRISIRa (CRISPR activation), where the dCas recruits transcriptional activators to promote downstream gene expression. Therefore, if a CRISPR system can be established in Vibrio natriegens, it will enable multiple modalities of regulation of target genes and simultaneous repression and activation of multiple gene transcripts, greatly enhancing its potential as a novel chassis organism. In addition, due to the complex composition and diverse routes of the CRISPRa system, if the CRISPRa system can be successfully introduced into Vibrio natriegens to achieve efficient activation of target genes, this will further enhance Vibrio natriegens' operability and show its great potential as a novel chassis organism.

Previous characterization of components in Vibrio natriegens showed that it could hardly withstand the endogenous burden of expressing high-intensity proteins. When expressing fluorescent proteins with a strong promoter, Vibrio natriegens shows a precipitous drop in growth rate [10], rather than E. coli, which shows a linear decrease in growth rate. Therefore, the development of CRISPR gene regulation tools for Vibrio natriegens should consider two characteristics, lightweight and flexibility, i.e., small molecular weight, low resource consumption, and low growth burden. The Cas9 and Cas12a proteins commonly used in CRISPR systems usually consist of 1,000-1,500 aa. In contrast, the newly discovered Cas12f (Cas14) and CasΦ proteins are less than half their molecular weight (less than 800aa), giving them great potential as new CRISPR system manipulation tools.

Cas12f protein, consisting of 400-700 amino acid residues, is a naturally occurring Cas protein recently discovered in archaea. It forms a complex targeting specific double-stranded DNA sequences, together with tracrRNA and crRNA [11-12], as tracrRNA and crRNA can be integrated into a single sgRNA to function as a guide for Cas12f[13]. Cas12f also generally recognizes PAM sequences that are 5’base T-rich, such as TTTA[13-14]. A recent study used an iterative approach, mutating the Cas protein at multiple sites and selecting the most effective Cas protein as the substrate for the next round of mutation. They found that a novel Cas12f protein could function in mammalian cells and exert gene activation efficiency comparable to that of Cas12a, suggesting that Cas12f has excellent potential for application in target sequence regulation[15]. 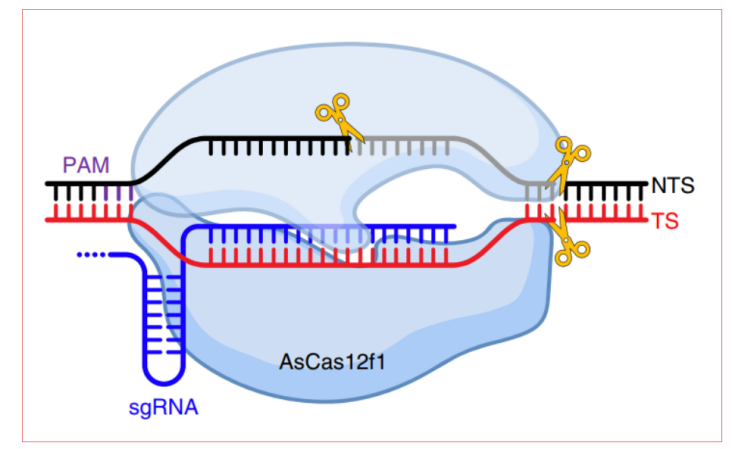 CasΦ(Cas12j) is another lightweight Cas protein originating from phage, known for its compact and elaborate structure. CasΦ also requires a 5’base T-rich PAM sequence, such as 5’-TBN-3’PAMs. The mechanism of action of CasΦ is simpler than that of Cas12f, as CasΦ can not only cutting crRNAs but also cleaving DNA of the target sequence without the existence of additional tracrRNA. Therefore, we can make CasΦ protein target other sequences only by changing the gRNA. By working with a single gRNA, CasΦ can edit cells with an efficiency of 33%, which has reached the level of CRISPRa based on existing CRISPR systems such as CRISPR-Cas9, CRISPR-Cas12a and CRISPR-CasX[16]. Given that CasΦ is an emerging Cas protein, we hope that further studies and modifications can improve its gene regulation ability and let it play a greater role in gene editing.

CasΦ acts as a shear to cleave the precursor into a single CRISPR effector consisting of crRNAs and CasΦ proteins. The crRNA has a spacer sequence of approximately 14-20 nt, complementarily paired with the target DNA strand, while CasΦ has RuvC endonuclease activity and acts as a cleaver of the target DNA strand.

These studies showed that the novel Cas12a and CasΦ proteins have the advantages of small molecular weight, simple operation and high efficiency, and have great potential for application in gene expression regulation and gene editing. They are expected to break the bottleneck in the field of gene editing and to activate the transcription of target genes in Vibrio natriegens.