The efficiency of CRISPRa could be influenced by its own construction, meaning that different activation domains(AD) as well as fusion types of AD and Cas protein should be evaluated systematically.

Based on the principle of σ70-based CRISPRa and reference data, four proteins were analyzed by Alphafold2 ,SWISS-MODEL and protein-protein docking.

To select the most suitable AD from the N-terminal domain species of RNA polymerase α subunit of Escherichia coli, Vibrionatriegens and P.Aeruginosa, we used the alphafold2 public server of colab , SWISS-Model and I-TASSER server to model the protein structure. Besides, we simulated the protein-protein docking of AD and RNA polymerase β subunits by Zdock analysis of the Discovery Studio and Rdock Optimization function. Finally, we used PyMol to compare the docking results and the actual structures to find out their differences.The results showed that the α domain of RNAp from Vibrio natriegens could accomplish the best gene activation compared with others.

Our original design based on the conclusion above showed non-ideal result, however, all of these four ADs impeded the gene expression while classic AD SoxS showed a successful activation. We assumed that this may due to the fusion manner which was then proved by both docking analysis and practical function tests that Cas-linker-AD is better than our first design, AD-linker-Cas.

Moreover, by comparing the modeling results from the I-TASSER server, we selected a relatively more appropriate linker from the six linkers collected.

Our modeling was integrated with our design and provided a direction for our project as shown in Figure1.

Fig 1. Integration of the protein structure model and our design.

Since we didn't find the structure of the three kinds of N-terminal domains of RNA polymerase α subunit and many protein structures in Vibrionatriegens are difficult to see in the public database, we intended to model the protein structure ourselves. We got the sequence of its N-terminal domain from the literature we mentioned earlier, and used the alphafold2 public server of colab and SWISS-MODEL to model the structure of the three AD sequences, respectively. When using the alphafold2, we also adopted its MMseq2 database to generate multiple sequences alignment(MSA) results to guide modeling. We developed four models for each AD, three generated by the Alphafold2 and one by SWISS-MODEL. Then we used PyMol to compare them with the corresponding RNA polymerase subunit structure to select the most similar structure.

Table 1. Scores of three models of AD obtained by modeling with Alphafold2.

B. The sequence IDDT prediction map. The higher the IDDT value is, the more reliable the position is. 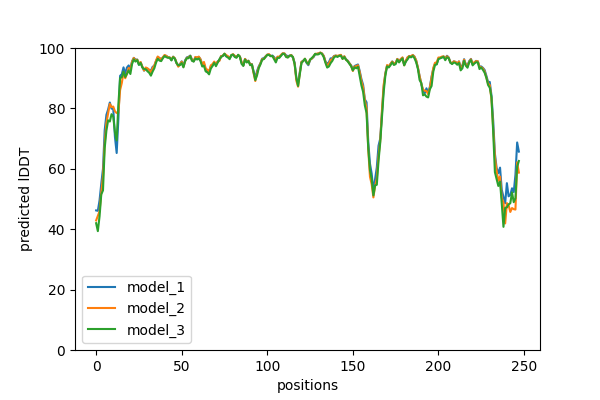 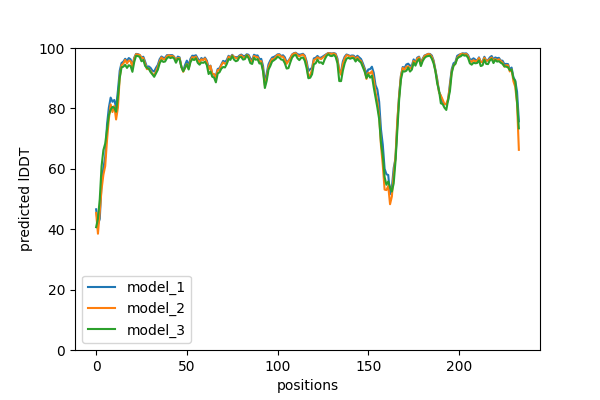 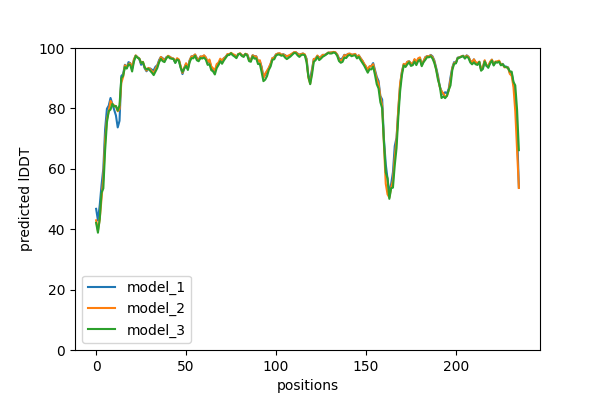 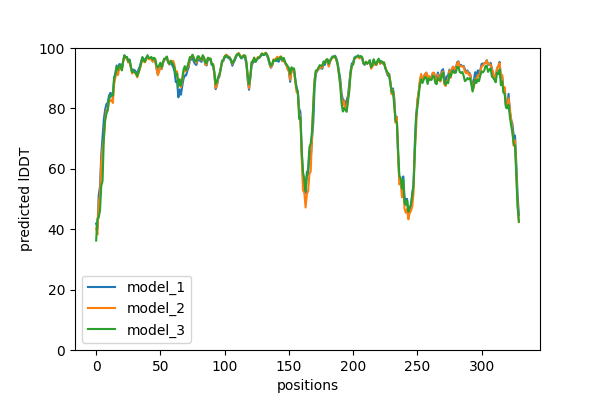 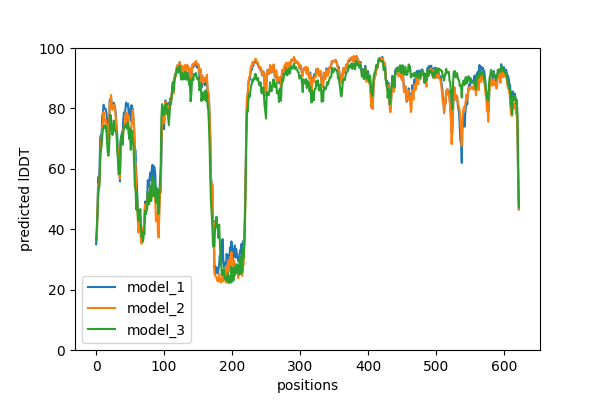 RMSD value comparison
To select the most suitable protein structure for subsequent modeling, we compared the the first models generated by Alphafold2 and the model generated by SWISS-MODEL with the corresponding structure of RNA polymerase α subunit using PyMol.

Generally speaking, when the RSDs value is less than 2, we believe that the two proteins structure used for comparison are very similar. From this, we learned that the modeling effect of the two methods was fantastic. It is worth mentioning that the structure of SWISS-MODEL was slightly closer to the original structure. Therefore, we uniformly used the modeling results of SWISS-MODEL here.


Preview of the final model structure

Fig 7. Structure comparison of protein predicted by SWISS-MODEL and alphafold2. The yellow one is the result by SWISS-MODEL while the magenta one is by alphafold2.From top to bottom, they are:E.c NTD,V.n α,V.n σ

Protein docking technology is a technique to predict protein interaction and recognition. At present, many programs have been developed for protein-protein dockings, such as Hex Protein Docking, ZDOCK, RZOCK, Rosetta, etc. ZDOCK is a rigid protein docking algorithm based on fast Fourier transform correlation technology, which is created by the University of Massachusetts Medical School, provides rigid-body docking of two protein structures. The fast Fourier transform correlation technique in the algorithm searches the translation and rotation space of a protein-protein system. The docking results and clustering results of these conformations were sorted according to ZRANK or ZDOCK scores. 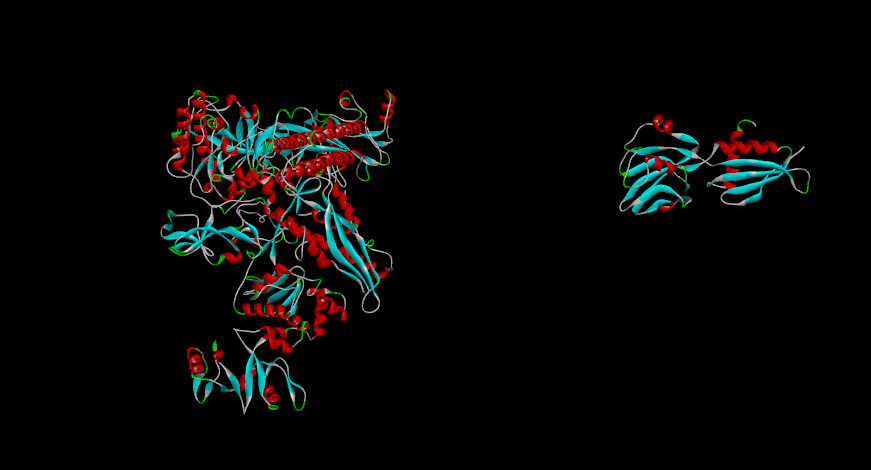 Fig 8. Two proteins to be docked by Zdock, the left receptor protein is 4LK1 protein’s c chain from PDB database, and the right ligand protein is V.n α protein predicted by SWISS-MODEL.

We used the Discovery Studio to complete the docking of proteins. We obtained the protein structure of E. coli RNA polymerase numbered 4LK1 from the pbd protein database during the docking process. Because its molecular weight is too large, we only retained its β subunit to simulate our docking. We defined the β subunit as receptor protein and the AD as ligand-protein. In the docking process, the Euler angle of rotating sampling of ligand orientation was set to 15° to avoid excessive redundant calculation. Because the ligand inhibitors used in our modeling were very small, we set RMSD Cutoff to the cluster radius of 6.0 and Interface Cutoff to 9.0 to get better results.

E. c α-NTD, V.n α-NTD, P.aru α-NTD and the whole α subunit of Vibrionatriegens (V. n α) were used as ligand proteins, while the β subunits of E. coli RNA polymerase were used as receptor proteins in the first form of docking. At the same time, we also used the σ subunit of V. n as the ligand-protein and the β subunit of E. coli RNA polymerase as the receptor protein for the second form of docking.

RDOCK is an algorithm for modifying and optimizing docking complexes and uses the CHARMm-based program to optimize and score. The docking structure predicted by ZDOCK could be optimized and reordered to select the near-native structure. RDOCK is mainly composed of two-stage energy minimizing scheme, which includes evaluating electrostatic energy and dissolvent energy, and finally ranking the optimized results according to the sum of the two kinds of energy. In energy minimizing of the two stages, RDOCK uses CHARMm to eliminate collision and optimize polarity and charge interaction.

The result information of RDOCK is shown in the table browser.

Fig 9. The docking results after Rdock, in which the green part is the 4LK1 protein C chain from PDB database, and the blue part is the V.n α protein predicted by SWISS-MODEL.

Fig 10. Structural comparison of the results of our docking with the original protein structure. The blue part is the AC chain of 4LK1 protein from PDB database, and the purple part is our docking result. The RMSD value is 0.081.

We have found the most suitable AD through protein docking, and now we need to get the connection mode of linker connecting fusion protein through modeling. This will include obtaining a suitable linking site between linker and AD and selecting the most suitable linker. We will use SWISS-MODEL and I-TASSER server to model the protein carrying linker, and select it by appropriate methods.

To decide to connect the N-terminal or C-terminal of AD to Cas Φ, we repeated the two steps mentioned above, structural modeling and protein docking, to explore the effect of the linker junction site on AD recruitment of RNA polymerase. It is worth noting that in structural modeling, SWISS-MODEL is unable to model the structure of Linker because of the lack of homologous templates. Therefore, we re-established the protein structure of the N-terminal and C-terminal linked Linker in the N-terminal domain of Vibrionatriegens α subunit by using the alphafold2 server and docked it with RNA polymerase β subunit according to the first and second steps. The following are the results.
Results of Linker modeling

Table 5. Scores of three models of two kinds of AD obtained by modeling with alphafold2.

2. Sequence prediction map. The higher the value is, the more reliable the position is. 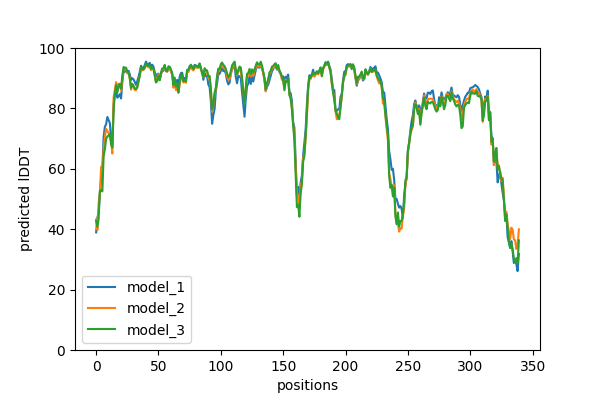 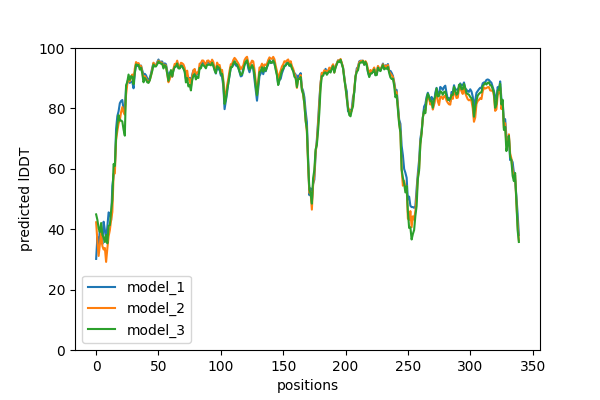 3. Preview of the final model structure

This aroused our interest, and we further explored the original. At first, we planned to compare the differences between the two structures and the original V.n α structure, but then we found that the RMSD values of the three structures were all less than 2, indicating their high similarity. However, when we compare the whole structure after Rdock, we find the reason for the difference.

After determining the linkage site of the Linker, we continued to filter the most appropriate linker.

To screen the most suitable linker, we built a cas Φ-linker-AD structure with different linkers (where the cas Φ sequence is the one used in our experiment). Additionally, we used the N-terminal domain of E. coli RNA polymerase α subunit as AD. When we continued to use colab's alphafold2 public server, perhaps because the structure of Cas Φ hasn’t been logged in, the established model was inferior, so we chose the I-TASSR server to model later.

Fig 15. Fusion protein structure obtained by I-TASSER modeling, the blue part is cas Φ, the red part is linker, and the green part is AD.