..
1. Characterization of Different Regulator and Reporter

Different regulator parts will influence the expression of genes in sharp dgree. For example, we got a database (N=2500) from Ailurus, and the expression level between different combination of regulatory parts can differ 600 times. 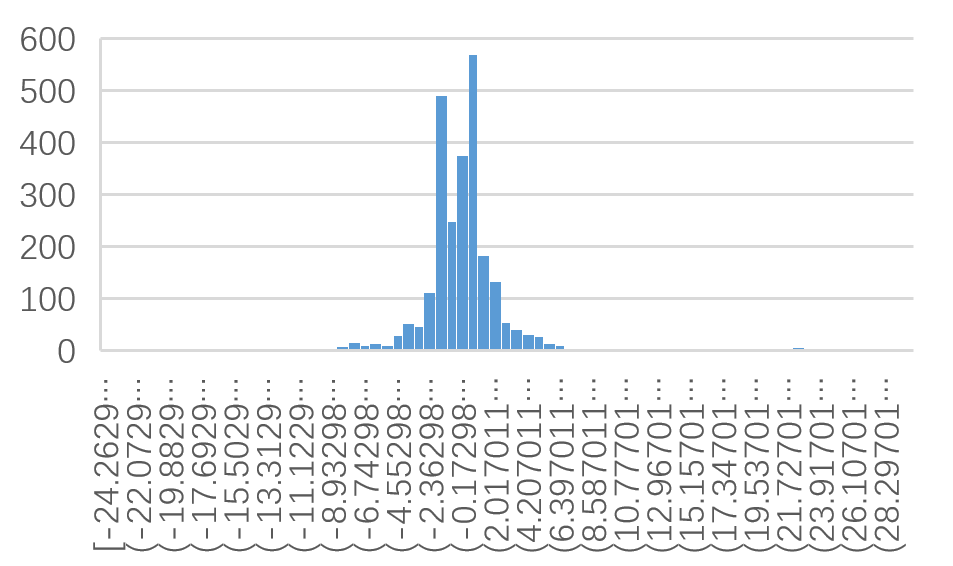 In order to make the SSR collection have a broad gene expression level, we systematically characterize 7 kinds of regulator parts. We found that artificial promoters have a higher fluctuation then natural promoters, and the mini structure before RBS could impede the expression of genes sharply.

We first chose the up-elements which offer PAMs for dCasΦ. To our surprise, this short sequence could influence the expression level, this remind us to set enach single control when test CRISPRa or CRISPRi efficiency. 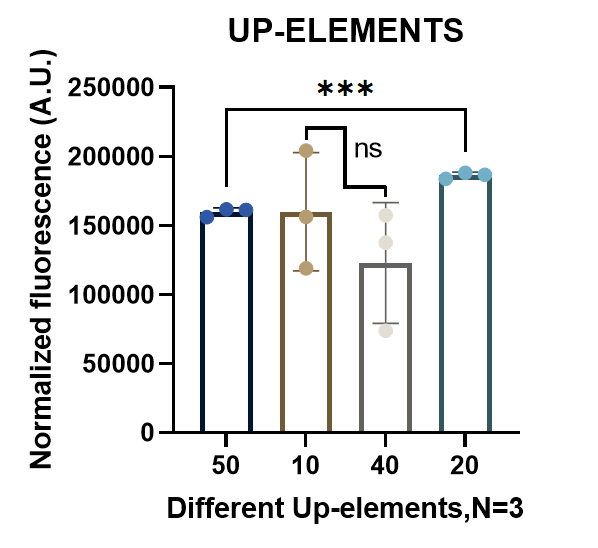 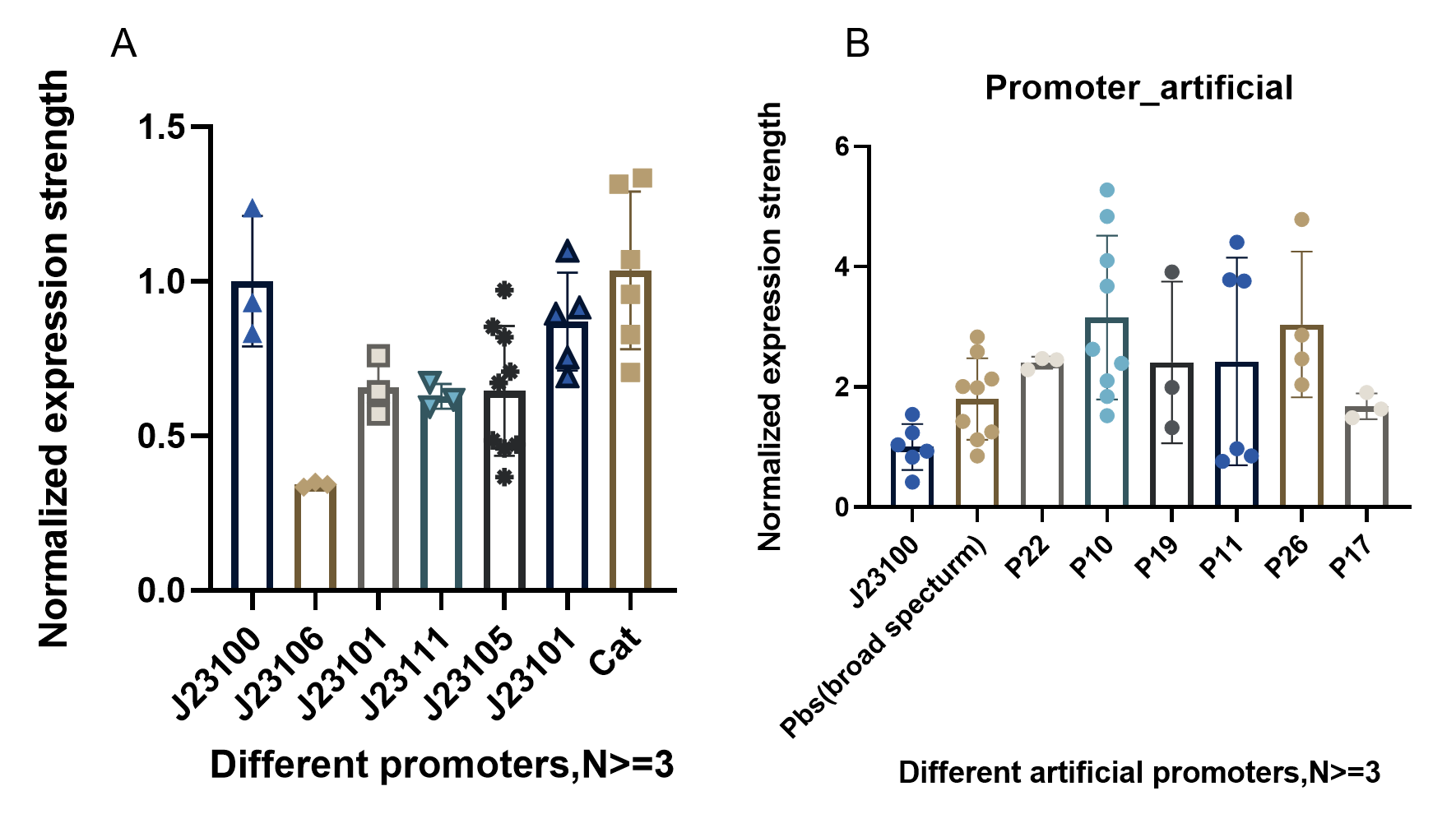 We then choose other 5 promoters from Andeson collection and Pcat. Their performance is consistent with data measured by other iGEM teams and reference. After this, we choose one broad spectrum promoter, Pbs and 6 synthetic promoters. 4 promoters showed high fluctuation in different groups. We assumed that they are not suitable for constitutively controllable expression although they shows higher expression level. 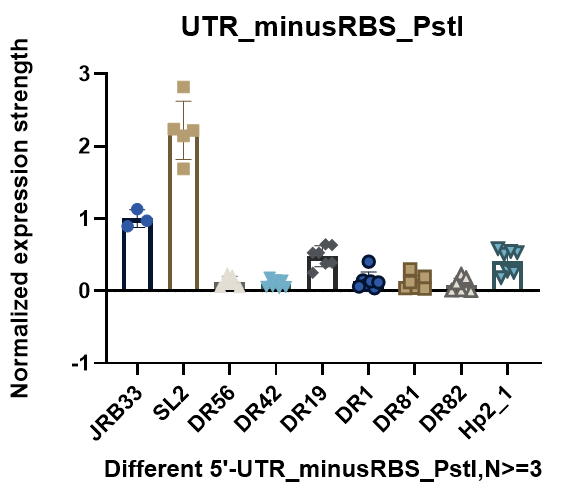 Next, we tested the influence of 5’UTRs. Some reference mentioned that small structure could impede initiations of translation, so we added a PstI site between 5’-UTR and B0033. They all showed a harm in the gene expression.

In fact, the expression strength of different 5’-UTR has been measured before (Figure 1.1.3.2).

So we add a short sequence between PstI and B0033 as Figure 1.1.3.2 did. The expression level recovered. 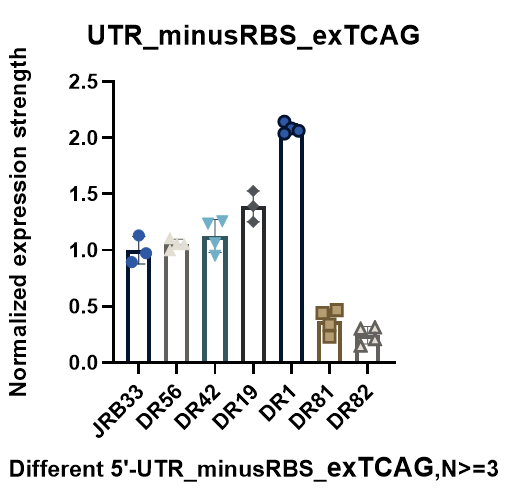 To further explore how could sequence in this position influence gene expression, we add 20N under RiboJ by PCR and blunt ligation, and each colony was sticked for observation. 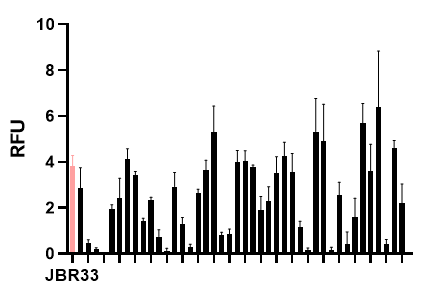 To our surprise, most of the sequence impeded the gene expression compared with JBR33. 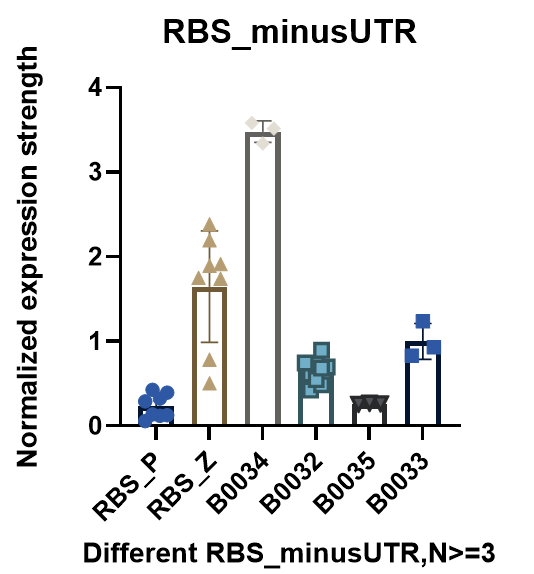 Then we characterized 5 other RBSs. The result of three B003x is consist with reference data. 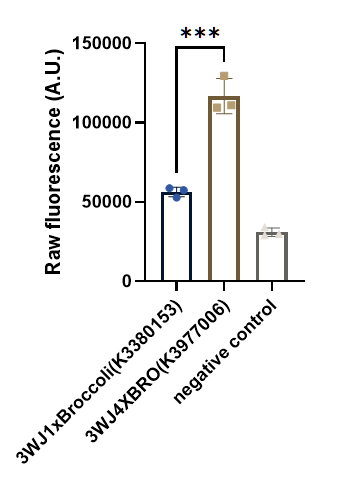 Until now, we met some cases that small structure before B0033 influence its performance, so we assumed that RNA reporter is more suitable for test the strength of promoter and stability of RNAs, so we improved K3380153 and added more secondary structure, the construction was named K3977006, and shows better signal. 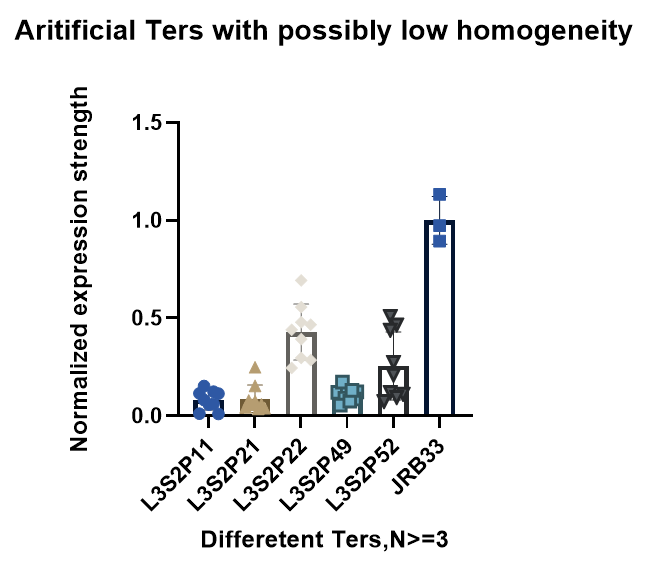 When chose Terminator, we took the homogeneity into consideration. Due to the high propagate rate, gene circuits which owns high homogeneity may reconstructed rapidly in Vibrio natriegens. Our result shows that L3S2P11, L3S2P21, L3S2P49 are all strong terminators, but L3S2P22 could lead leakiness. 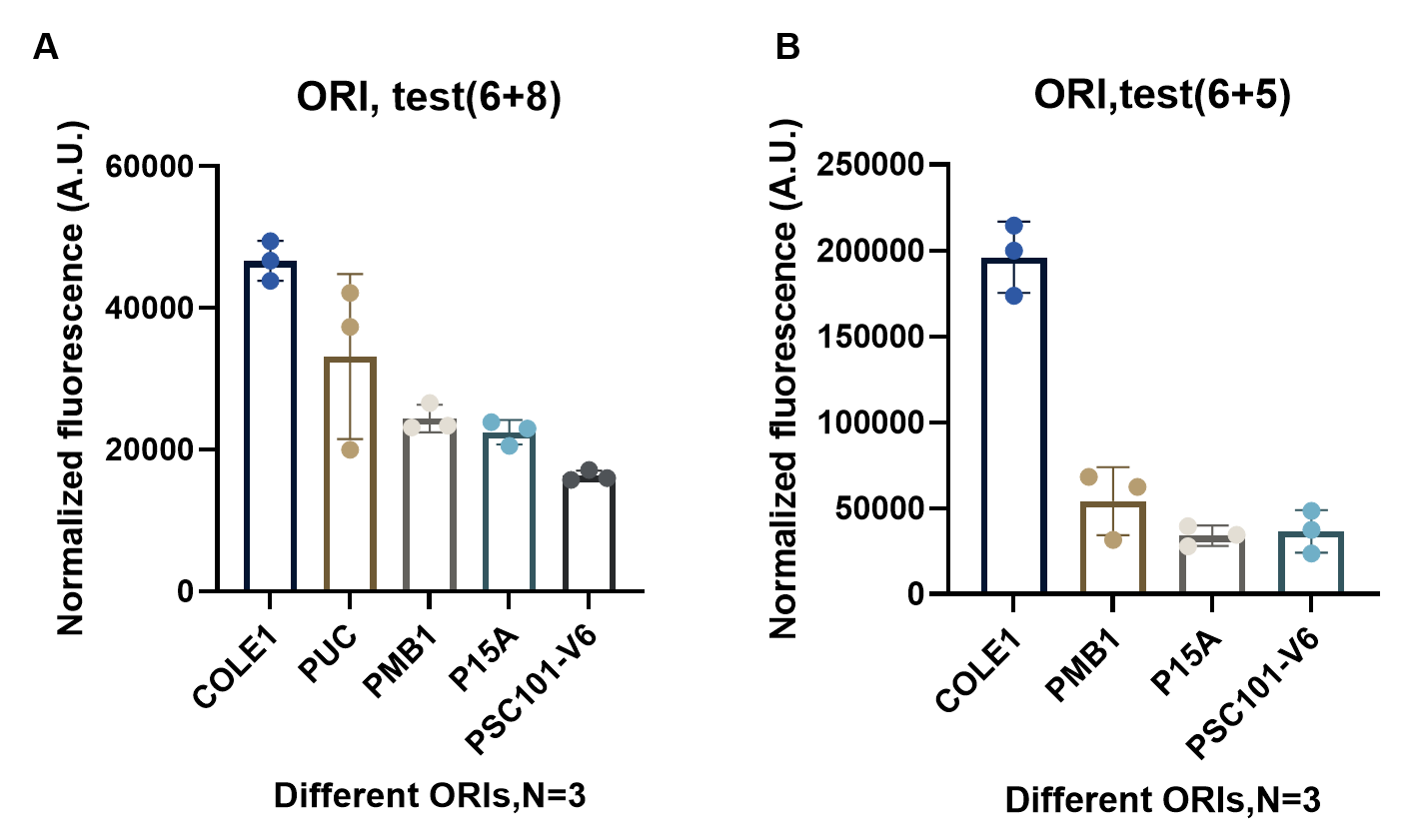 Next, we paid more attention into the different ORIs in Vibrio natriegens. To our surprise, the fluorescence result showed that the relative copy number is different during the incubation time.

So we applied qPCR to measure the relative copy number in different incubation time more quantitively . Our result shows that the copy number of ColE1 changed strongly, and PUC was the most stable. 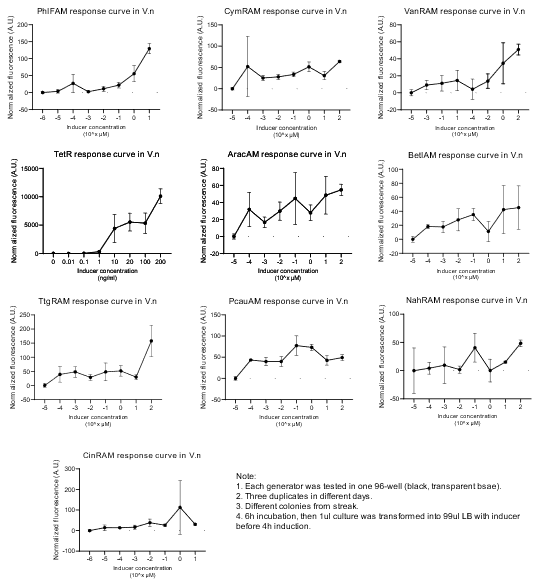 The lack of inducible promoter also impede the popularize of Vibrio natriegens, so we bought “Marionette” collection from addgene and changed YFP into mSarlet-I, then characterized 11 inducible promoter in it. The result is shown in Figure1.1.8.1.

However, to our surprise, the LacIAM shown a strong basal expression and os even equal to the output in a COLE1 plasmid (in fact, the LacIAM is in P15A). 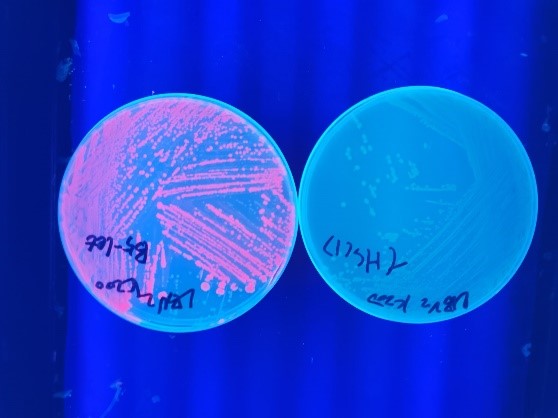 To tackle with the strong basal expression of LacIAM, we added a star-like RNA adapter before mSarlet-I, and apply another Ptac to express complementary RNA which could release the secondary structure so as to permit transcription and even translation.

We constructed this plasmid successfully (Figure1.1.8.3), but due to the DDL, we can not perform meticulous characterization.

..
2. Optimization of Protocols about Constructing Collection and Transformation

We applied TEDA to construct our collection. In the mixture of TEDA, only T5 exonuclease is added, so it’s cheap for every lab and especially iGEM teams.

What’s more, sfGFP may not work in V.n as shown in Figure 1.2.1.1, so we use ccdB as the counter selection marker. 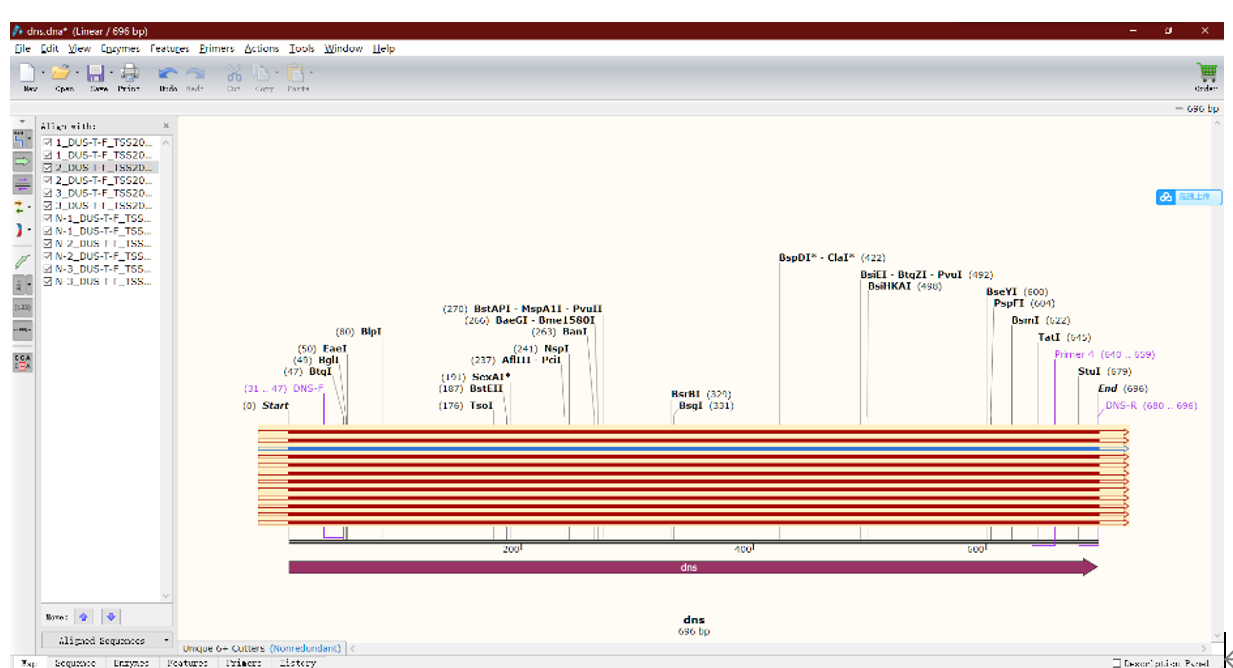 ..
3. Synthesis of naringenin and violacein in BL21 and Vibrio naringenin

Violacein and naringenin are classic natural products, and have been synthesized widely in different chassis organisms. We believe that the synthesis of these two products is a important step before a chassis organism could be accepted.

Due to the lack knowledge of metabolic flux in Vibrio natriegens, we applied mathematic model and use parts from SSR collection to achieve naringenin synthesis in Vibrio natriegens, and the engineering is successful (as shown in Figure. 1.3.1.1, the first sample is 500μM positive control).

Then we try to synthesis violacein in BL21 and Vibrio natriegens.

The results are shown below. 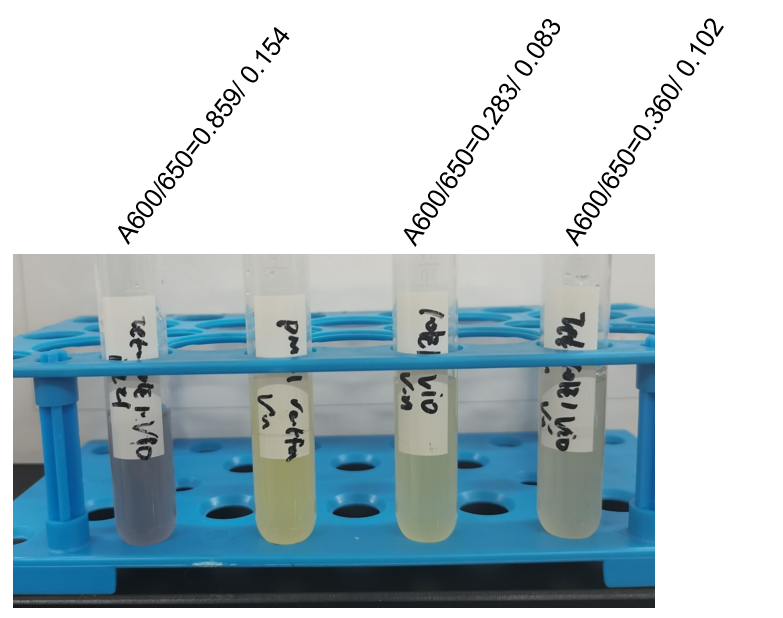 Interestingly, we found that their colony performance is vast different High copy number VioABCDE perform better in V.n, bu not BL21, this is to the contrary of production 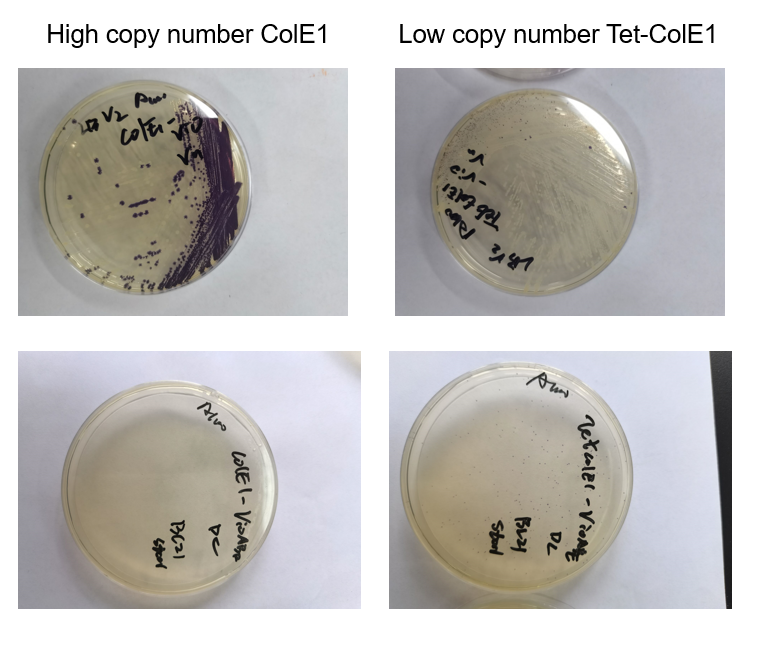 ..
4. Engineering the CRISPRa Construction to Achieve the Best Efficiency

In prokaryote, most of the CRISPRa strategies are based on the activation domains (AD) which could recruit components of RNAp, so as to direct the work of holoenzyme. Until now, three manners of recruiting ADs nearby promoter have been demonstrated successful gene activation as shown in Figure 1.4.

Most of related CRISPRa research directly fused AD with dCas9 or dCas12a and usually achieve the best efficiency. Another popular manner is applying RNA-binding protein and special RNA adapter such as MCP-MS2 and γN22plus-BoxB. This manner could achieve the same activation level compared with direct fusion. In a latest research, SYNZIP was used to recruit AD noncovalently and also achieve a high activation.

Here, we fused four ADs and explored their capacity in the C-fusion or N-fusion manner with the integration of modelling（https://2021.igem.org/Team:SCU-China/Protein_Structure）. We found that α domain of V.n’s RNAp achieved the best gene activation. 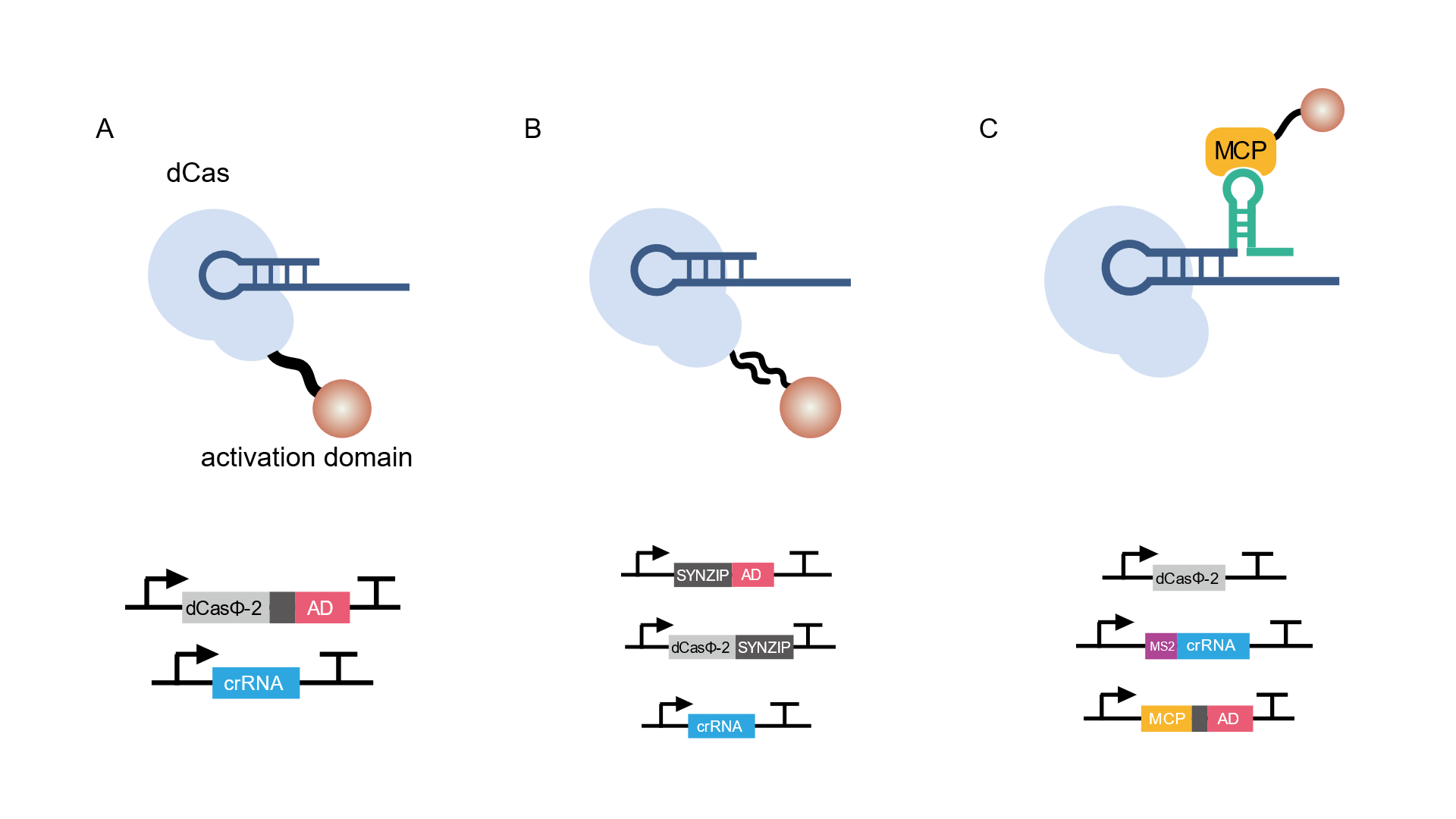 We chose four activation domains to fuse in the N-domain of dCasΦ to test CRISPRa, and fusion protein was expression by J23104-B0034, while crRNA was placed under aracPBAD promoter. 0.1%,0.5% and 1% of Arabinose were applied to induce the transcription of crRNA.Unfortunately, only classic SoxS showed a slight gene activation compared with other 3 combinations, as shown in Figure 1.4.1.1. What’s more, the V.n α, which was estimated to perform CRISPRa best impeded the expression of mSarlet-I 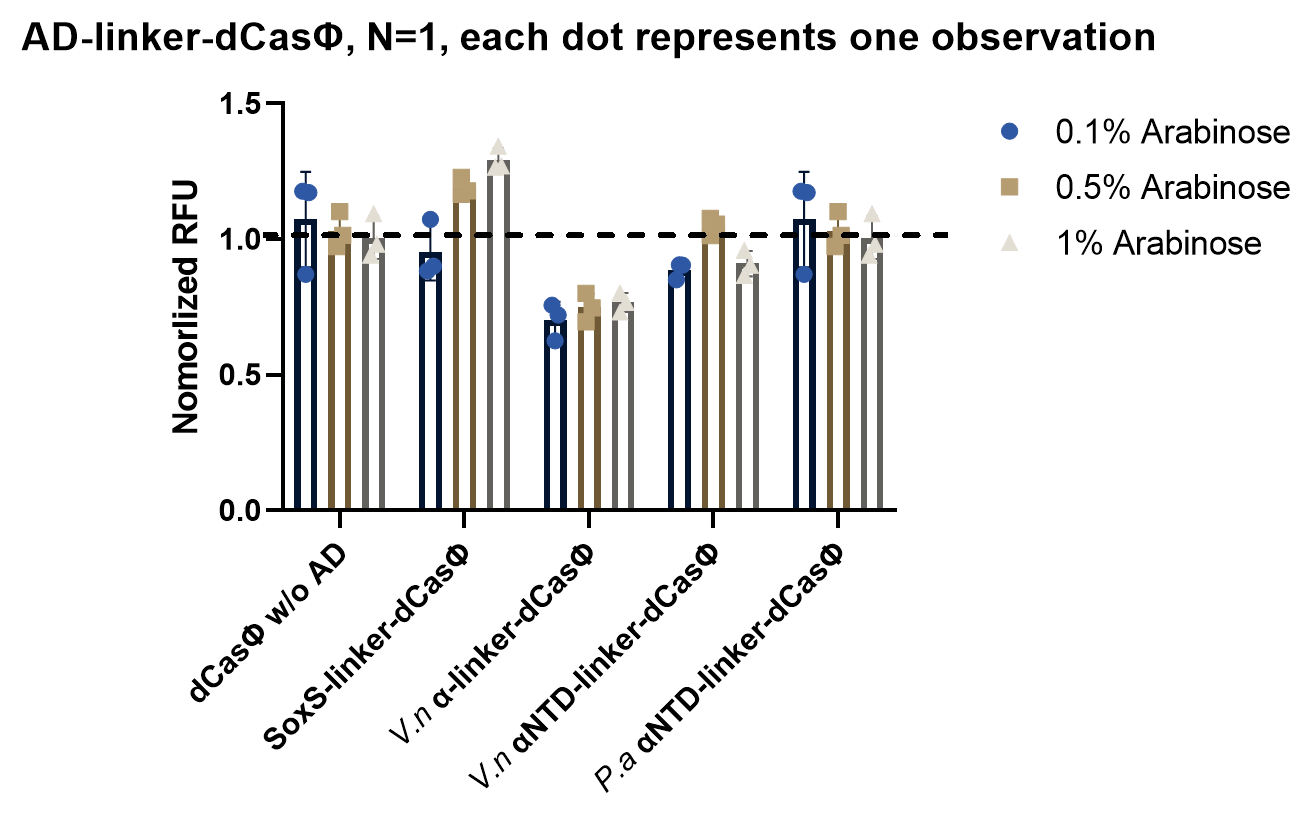 After reference research, we assumed that the fusion manner, or fuse AD in the N-domain of dCasΦ or in the C-domain of dCasΦ is important, and our model result backed up our suppose.

Then we build plasmids for dCasΦ-linker-ADs, most of the constructions showed gene activation except P.a α-NTD （Figure 3.1.2）. This is interesting too, because P.a α-NTD was declared better then E.c α-NTD. 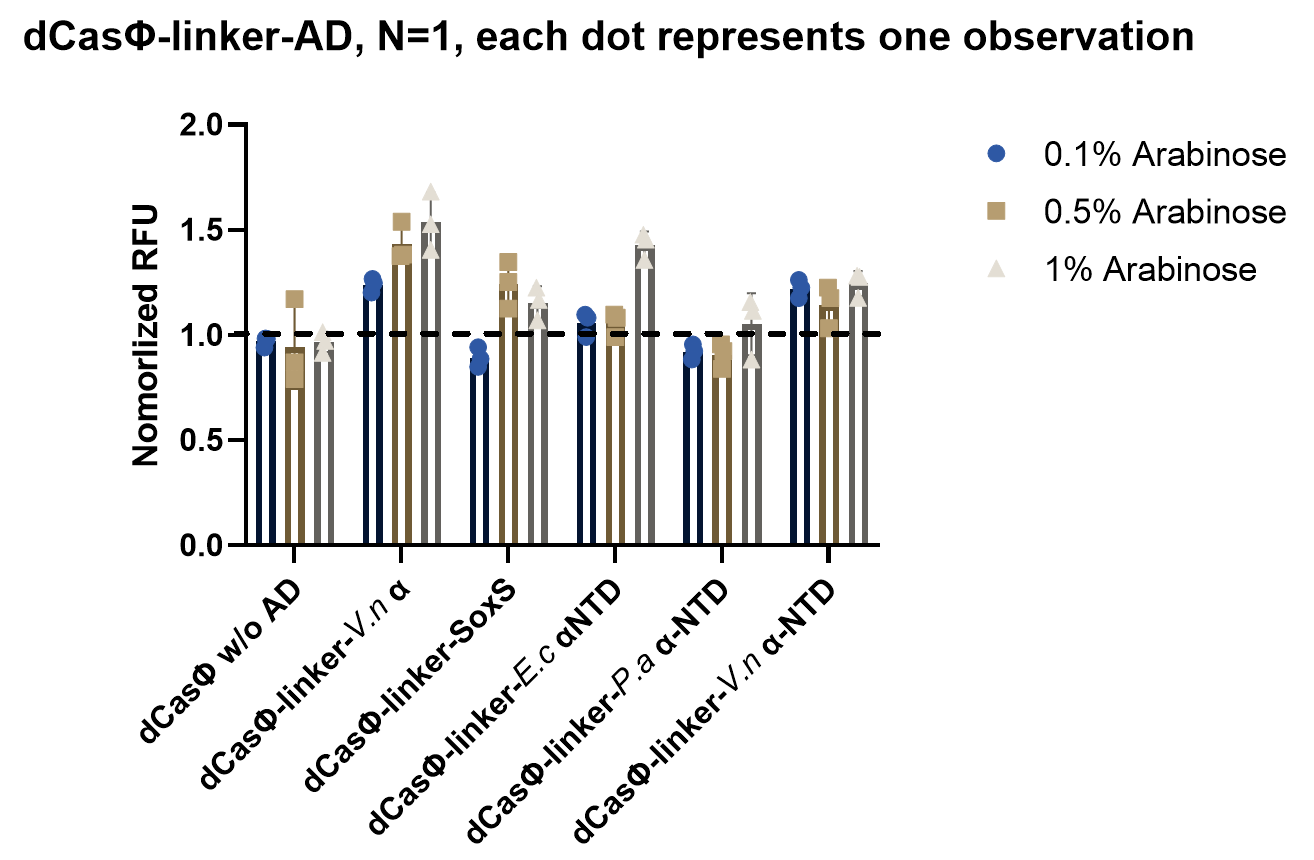 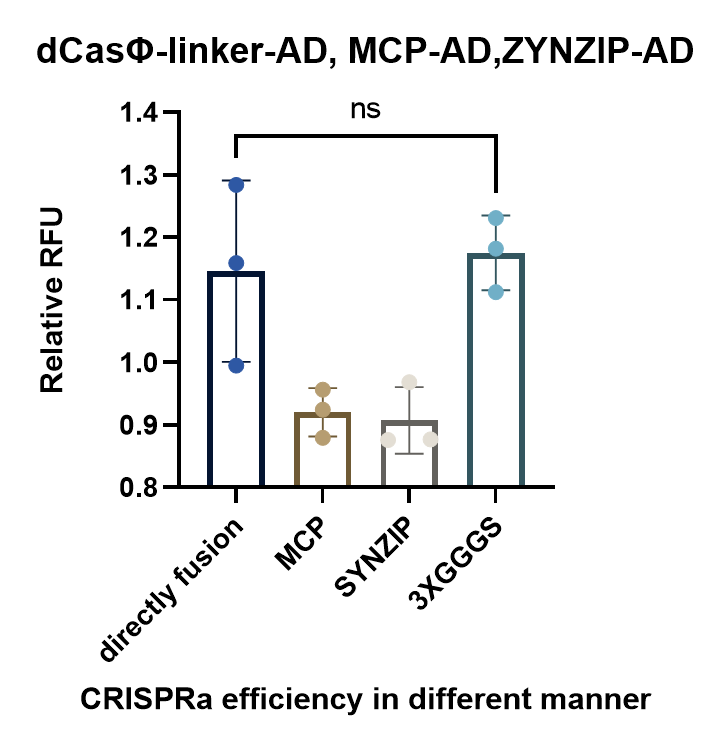 Then we test the efficiency of CRISPRa in three different manner and two different linker, use 1% L-arabinose to induce transcription of crRNA. We found that the best one is the dCasΦ-3XGGGS-AD as our model suggested, so we applied dCasΦ-3XGGGS-AD to accomplish the following test.

Then we applied dCasΦ-linker-V.n α to explore the concrete influence of distance between PAM site and TSS (transcription start site). Two spacer sequence were chose as showed in blue background as shown in Figure 3.3.2.1. To construct different plasmids with different up-elements, we apply blunt ligation.

CRISPRi was implemented by targeting the dCasφ-crRNA complex within the CDS of reporter genes. The effector module blocks the RNA-polymerase and inhibits the transcription process. Our Toggle switch was measured in E. coli DH5α for up to 40 hours over four phases. TS was successively accessed with the addition of the first inducer (aTc), followed by no addition, the second inducer (Ara), and finally no inducer again. Data was collected every ten hours by taking 120 μl of bacterial solution into 96-well plates then measured by the micro plate reader. Each data point represents the mean of three biological replicates. 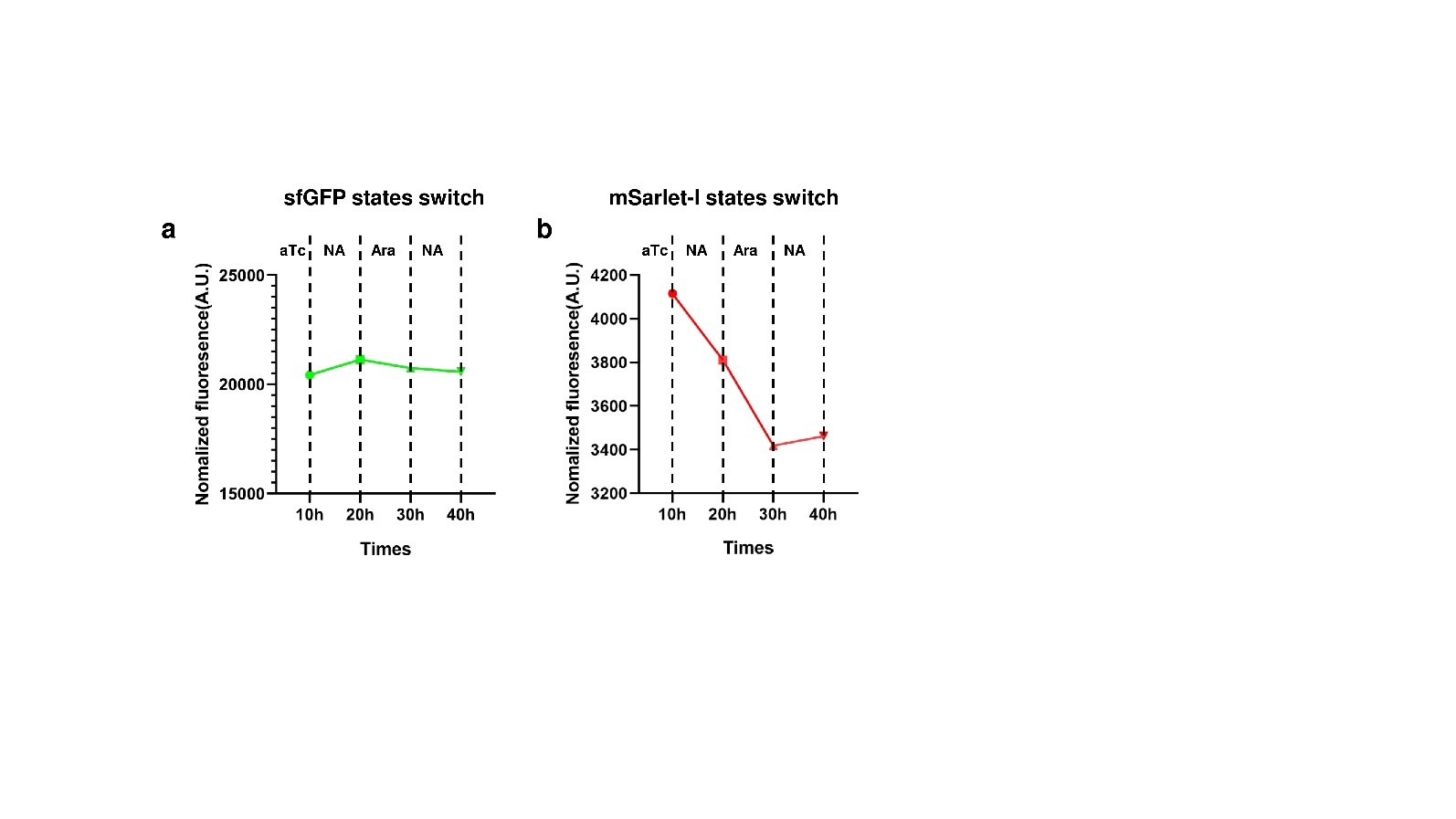 Figure 5.1. Behavior of TS over time in response to the following induction scheme:aTc-Nothing-Ara-Nothing (NA mains inducer was removed)

Figure 5.2.1 Binding sites of different spacers in the CDS region of reporter genes

A simple NOR-gate was used to determine the change in expression intensity of different reporter genes in the presence of only one inducer. After 10h of expression induction with 10ng/ml aTc or 1% Ara at 37 degrees C, 120 μl of the bacterial solution was taken into a 96-well plate and measured with an micro mplate reader to obtain its fluorescence intensity.

This suggested that the orthogonality of our spacers targeting mScarlet-I is significantly low and tends to trigger crosstalk between reporter genes of CRISPRi.

We considered this and the extremely low efficiency of sfGFP CRISPRi as the main reasons why TS didn’t work. The possible strategies are to target the promoter region to improve the efficiency of CRISPRi or to use an artificially designed spacer to improve the orthogonality of these two CRISPRi.

The former approach proved to be feasible when we constructed iFFL.

Figure 5.2.2 CRISPRi efficiency of different spacers. The spacers we chose in construction of the Toggle Switch were mScarlet-Spacer2 and sfGFP-spacer3.

Because iFFL can decouple the copy number and gene expression, and the gene expression will be in the same level. it is suitable for Vibrio natriegens who is sensitive to burden from gene circuit, because we can integrate circuit into genome and use iFFL to increase its performance

Then, we constructed plasmids which has dCasΦ-P19-mSarlet-P15AORI/PMB1ORI, and the colonies shows a successful iFFL (the same expression level of mSarlet).(Figure 6.2)