Problem
Our Idea
Inspiration
In depth

The emerging threat of water scarcity

With a growing world population, the need for freshwater for agricultural use is greater than ever and it will only keep increasing. Today, farming alone accounts for almost 70% of the water withdrawals, putting major stress on the freshwater sources at our disposal. 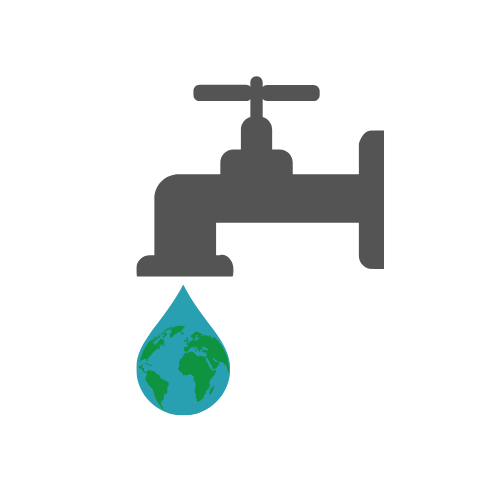 Despite the fact that 70% of the world’s surface is covered in water, only 2.5% of it is freshwater and as little as 1% of that is available to us, whereas the remaining amount is bound in glaciers and snowfields [1]. Rivers, lakes, and aquifers are either becoming too polluted to use or are drying up. Lack of freshwater is one of the greatest global issues we as a population are facing and it is immensely affecting the agricultural prospects in developing countries. At this rate, the situation will only worsen, and by 2025, 66% of the world population may be faced with the effects of water shortage [2].

To manage this crisis, various methods for desalinating seawater have been developed. However, they have some apparent drawbacks. The existing techniques are highly energy consuming, and the energy they use is often not renewable which causes them to leave environmental footprints. A conventional drinking water treatment plant uses less than 1 kWh, while reverse osmosis plants use 3-10 kWh energy to produce 1 m3 of desalinated seawater [3]. In addition to that, the conventional methods for desalination are very costly. Freshwater from desalination plants can be 125 - 250 % more expensive than conventional freshwater [3]. This makes them accessible only to wealthier countries and industries.

We in iGEM Linköping recognized this issue and decided to create an innovative approach for biodesalination, CyaSalt.

CyaSalt is a novel synthetic biology method to solve the freshwater shortage. Our aim is to desalinate seawater using genetically modified phototrophic organisms to create freshwater for agricultural use. Our solution is to exploit the photosynthetic properties of phototrophic organisms and therefore use sunlight as the driving force in the desalination process.
By using halophilic organisms that not only survive, but thrive, in salty conditions, we ensure that this method does not require the cultivation of phototrophs to occur in a laboratory environment prior to the desalination.

We propose to genetically modify the organisms to express the inwardly directed chloride pump halorhodopsin originating from the archaea Natronomonas pharaonis. Halorhodopsin is a light-activated ion pump and when induced, it facilitates the transport of chloride ions to the inside of the cell, against the concentration gradient.

To facilitate the influx of sodium ions, we also express channelrhodopsin in the phototrophic organisms, which is a light-induced ion channel originating from Chlamydomonas reinhardtii. The previously created negative membrane potential then aids channelrhodopsin to transport sodium ions into the cells. 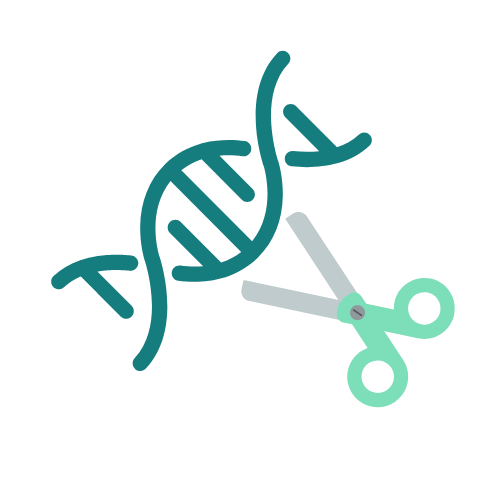 Furthermore, the Large Conductance Mechanosensitive Ion Channel, MscL, native to Synechocystis sp. PCC 6803, is activated by high osmotic pressure in the cells and regulates it to prevent cell disruption.

After desalination has been achieved, the phototrophic organisms have to be separated from the desalinated water. For this purpose, we designed a fusion protein where the membrane-bound part is an S-layer protein called slr1272, endogenous in Synechocystis sp. PCC 6803. This part of the fusion protein was designed so that it can be easily exchanged to other membrane-bound proteins specific for different phototrophic organisms.

The other part of the fusion protein is a carbohydrate binding domain, CBD, originating from Clostridium thermocellum. We take advantage of the high affinity for cellulose of CBD, so a cellulose filter can be used for the separation. Organisms that express CBD on their surface will bind to the filter and get retained, while the desalinated water is able to flow through. Read a detailed description of how we designed our project here.

We were inspired by the SJTU BioX Shanghai 2015 project, where they attempted to desalinate seawater by expressing halorhodopsin in cyanobacteria [4]. We thought it was a great idea and wanted to further improve it, so we added channelrhodopsin and the Large Conductance Mechanosensitive Ion Channel (MscL). We also got a lot of knowledge and inspiration from an article published in Plant Physiology by J. Amezaga et al. titled Biodesalination: a case study for applications of photosynthetic bacteria in water treatment [5], such as what to consider when selecting a suitable cyanobacterial strain, genetic manipulation and transformation and also manipulation of sodium transport. In addition, we also developed a method to remove the desalinating organisms from the water after desalination has occurred, through expression of the carbohydrate binding domain (CBD) fusion protein. The inspiration for using CBD came from the iGEM Linköping 2019 team, who implemented it in their project with great success [6]. After developing our idea, we reached out to experts, such as Dr Sara Ahmed and also potential users, farmers on the Baltic Sea island of Gotland, which is affected by water scarcity. These conversations confirmed that we were on the right path and that there was a real need for our project and that it would have good effects in affected areas when implemented into the real world. Read more about our Human Practices work on this page.

An illustration of our complete desalination and separation system, that is further described here can be seen in Figure 1.

Halorhodopsin, seen in Figure 2, is an inward directed chloride pump originating from the archaea Natronomonas pharaonis. It is located in the cell membranes of halobacteria and has the function of maintaining the chloride content of the cell. Halorhodopsin is a light-activated ion pump and when activated by light it facilitates the transport of chloride ions to the inside of the cell against the concentration gradient [7]. 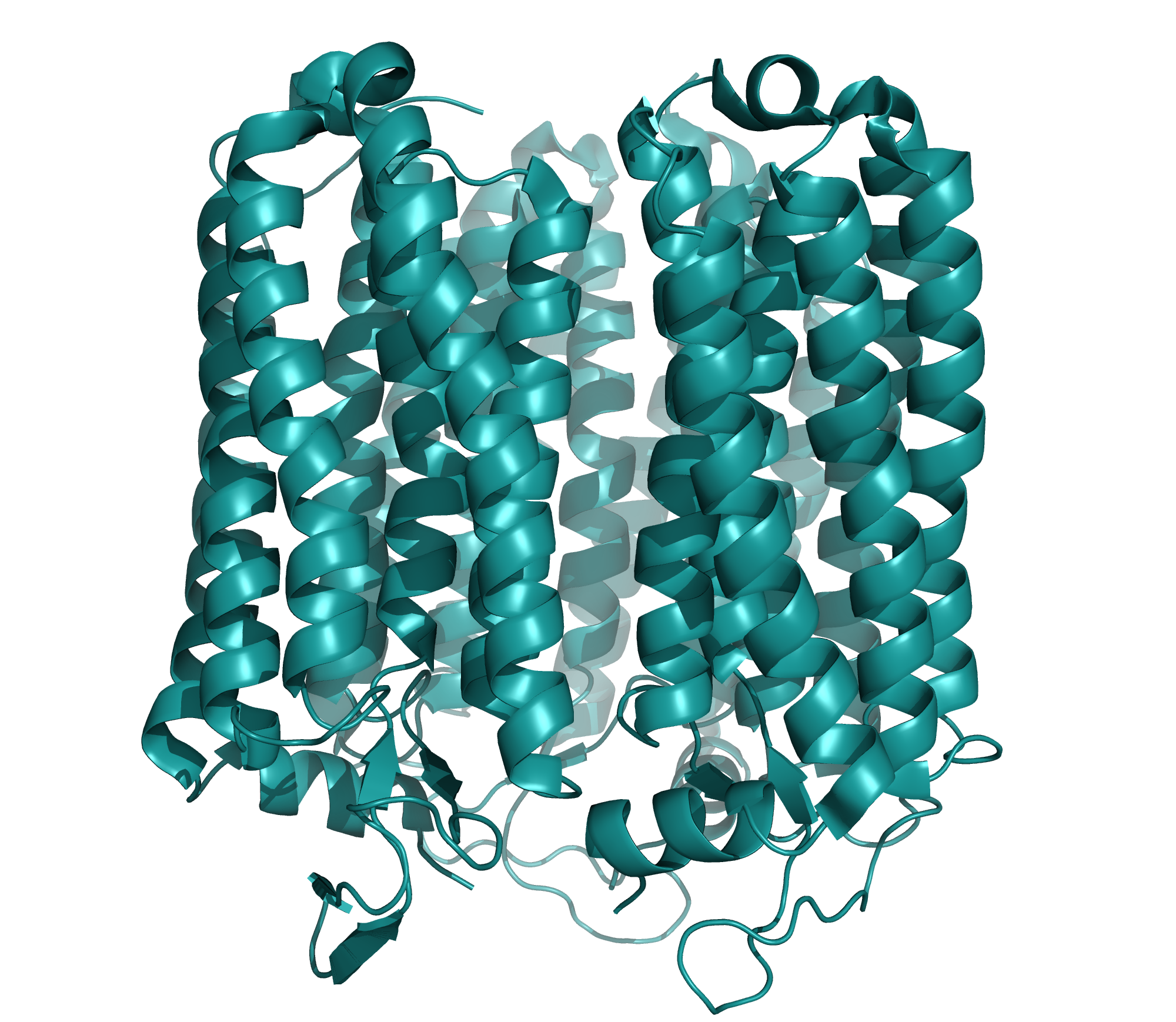 Channelrhodopsin, seen in Figure 3, is a nonspecific cation channel originating from the green algae Chlamydomonas reinhardtii. It is activated by light, like the ion pump halorhodopsin. When activated, a conformational change occurs allowing positively charged sodium ions to diffuse down their concentration gradients. The negative membrane potential created by the influx of chloride ions induced by Halorhodopsin is exploited so that channelrhodopsin can transport sodium ions into the cells [8, 9]. 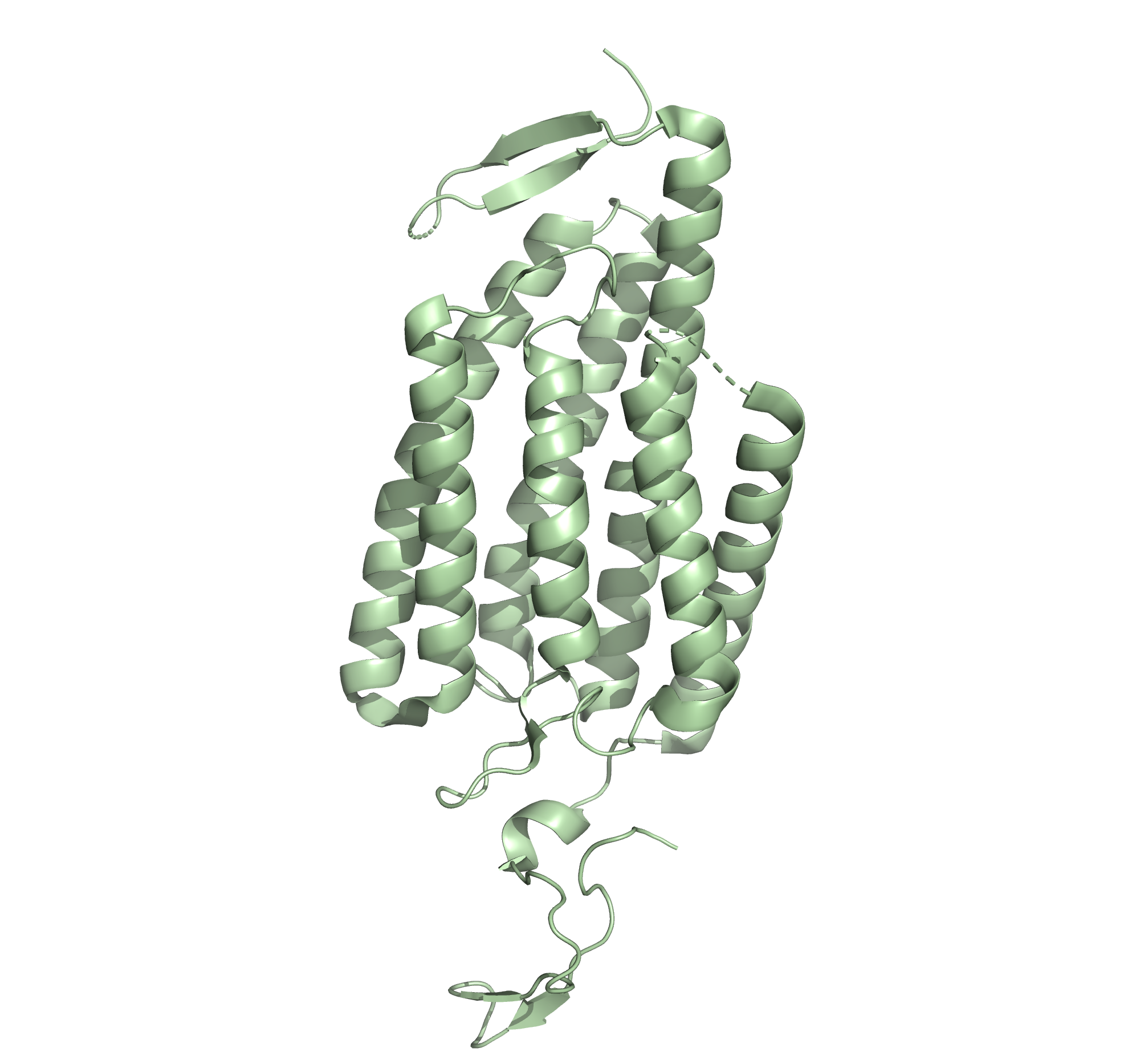 Large-conductance mechanosensitive channel, MscL, is an ion channel that is endogenous in Synechocystis sp. PCC 6803. It is a 145 amino acid long protein that acts as a sensor of cytoplasmic membrane tension and regulates cell volume under hypoosmotic stress. MscL is responsible for the flow of cations through the cytoplasmic membrane during stress. The purpose of MscL in our project is to regulate osmotic pressure in the cells to hinder cell disruption [11, 12].

We designed a fusion protein containing a carbohydrate binding domain (CBD) and an S-layer protein called slr1272, which is endogenous in Synechocystis sp. PCC 6803. CBDs are proteins derived from cellulose-degrading microorganisms. There is a variety of CBD families depending on their structure and function, CBDCipA, the type of CBD used in our project, belongs to the CBD family 3 and is derived from Clostridium Thermocellum. The reason the slr1272-CBD fusion protein was implemented is because CBD has a high affinity for cellulose. When filtered through a cellulose filter, bacteria expressing the fusion protein on their surface are expected to bind to the filter and get retained, while filtered water is able to flow through [6].

[3] Bienkowski B. Desalination is an expensive energy hog, but improvements are on the way. The World. 2015.