The plasmids containing the chromoproteins were transformed into E. coli strain XL1 according to the Biobrick Transformation protocol available on our protocol page. When plated after transformation, each culture containing a chromoprotein was plated in two ways, diluted and concentrated. A diluted plate refers to a plate containing 100 μL of the culture. For the concentrated plate, the culture was centrifuged followed by discarding 90% of the supernatant. The pellet of cells were resuspended in the remaining 10% of the supernatant. whereafter 100 μL of the resuspended culture was then plated. In our case, this resulted in a total of 12 experimental plates. In addition to plating the experimental cultures, non-transformed XL1-cells were plated as a control. All plates were incubated at 37°C for the following four days. For each day, pictures were taken of each plate individually to follow the color progress of the colonies. The chromoprotein amajLime was followed up on a UV-table in addition to regular pictures because of its fluorescent properties. These plates can be seen for each chromoprotein in Figure 1. below. The majority of the plates, diluted and concentrated, show colonies containing color after 36 hours of incubation. Over the course of the next 48 hours, the colors intensify. However, diluted asPink is an exception here. No obvious colonies containing color can be seen at 36 hours, suggesting that asPink-expressing cells need a little bit more time to develop color. 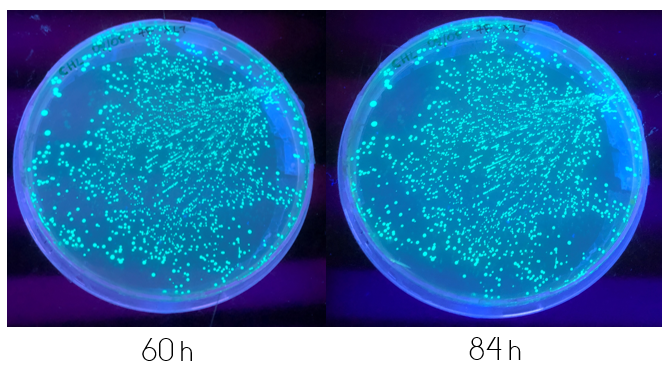 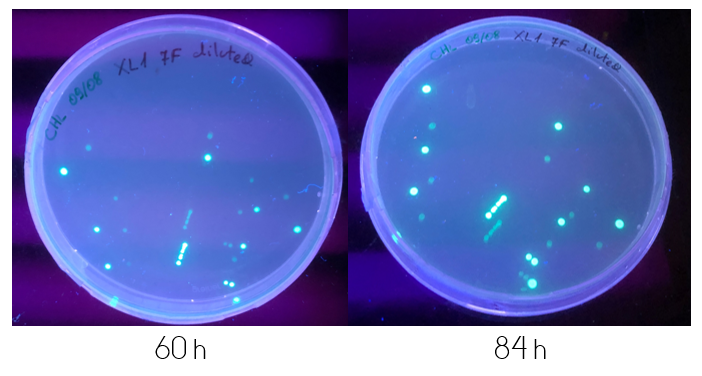 Figure 1. The plates of each chromoprotein studied: asPink, gfasPurple, spisPink, meffBlue, tsPurple, and amajLime. The number of hours passed since incubation is seen below each picture. Press on the side of the figure to scroll among the photos.

On the fourth day, the majority of the colonies on the plates had achieved color. Colonies were picked to start liquid cultures, which were incubated overnight at 37°C and 200 rpm. After incubation, the cultures were centrifuged and the supernatant removed. The cell pellets were then placed in a -20°C freezer, as a step toward lysing the bacteria. Once frozen, the cells were removed from the freezer and autoclaved water was added to lyse the bacteria using osmosis. In an attempt to further lyse the bacteria, a sonicator was used with an amplitude of 30% with two rounds of 30 seconds sonication and 30 seconds rest (a total of 2 minutes for each sample). Next step taken was centrifugation of the samples once more where the supernatants were preserved in clean 15 mL Falcon tubes. See Figure 2. below for a visualization of the supernatants from lysed transformant cells. 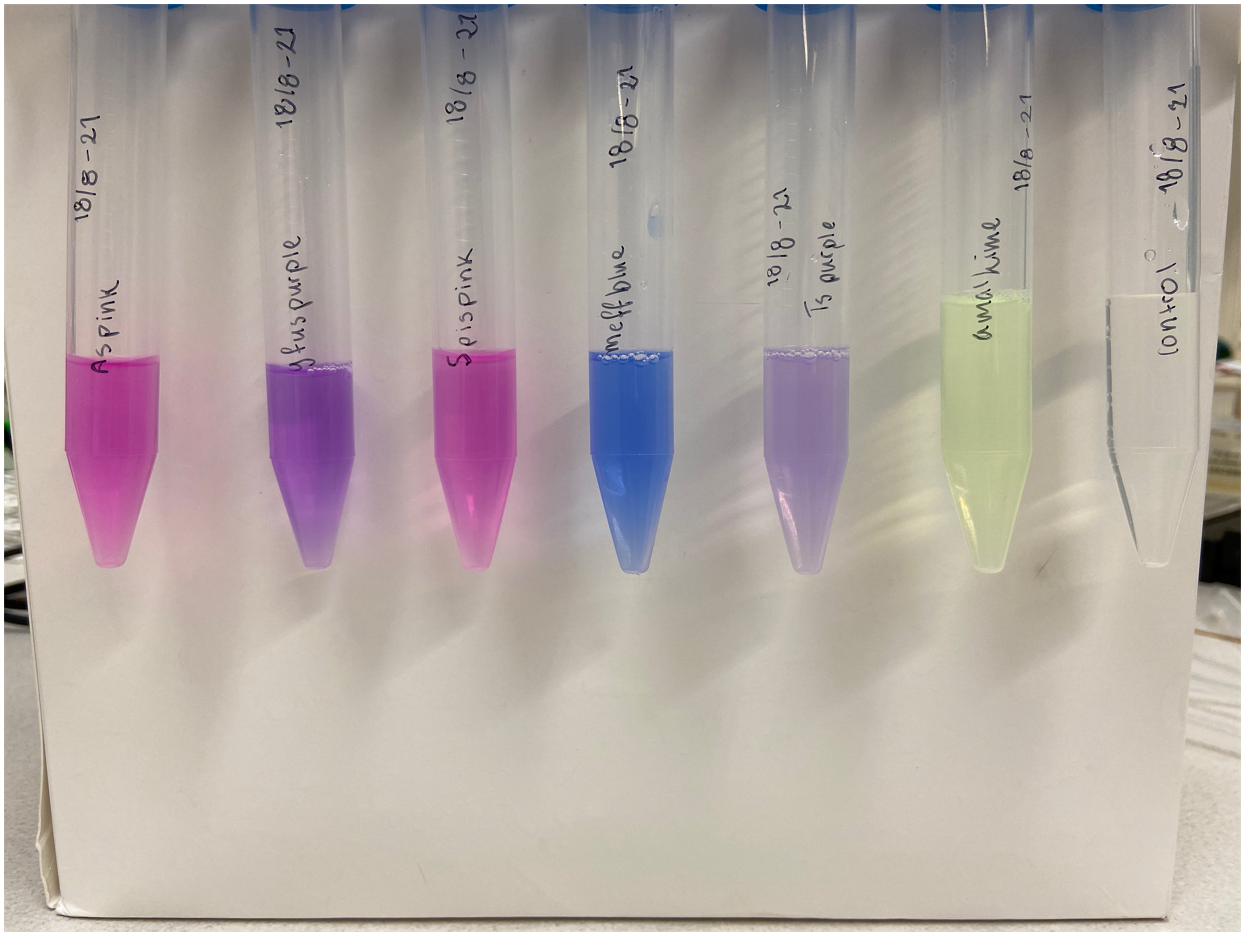 
In order to investigate fluorescence, all Falcon tubes were placed on a UV-table. Based on knowledge from amajLime’s Parts Registry page, the fluorescence of amajLime was expected and used as a control. As can be viewed in Figure 3., only amajLime was able to fluoresce. 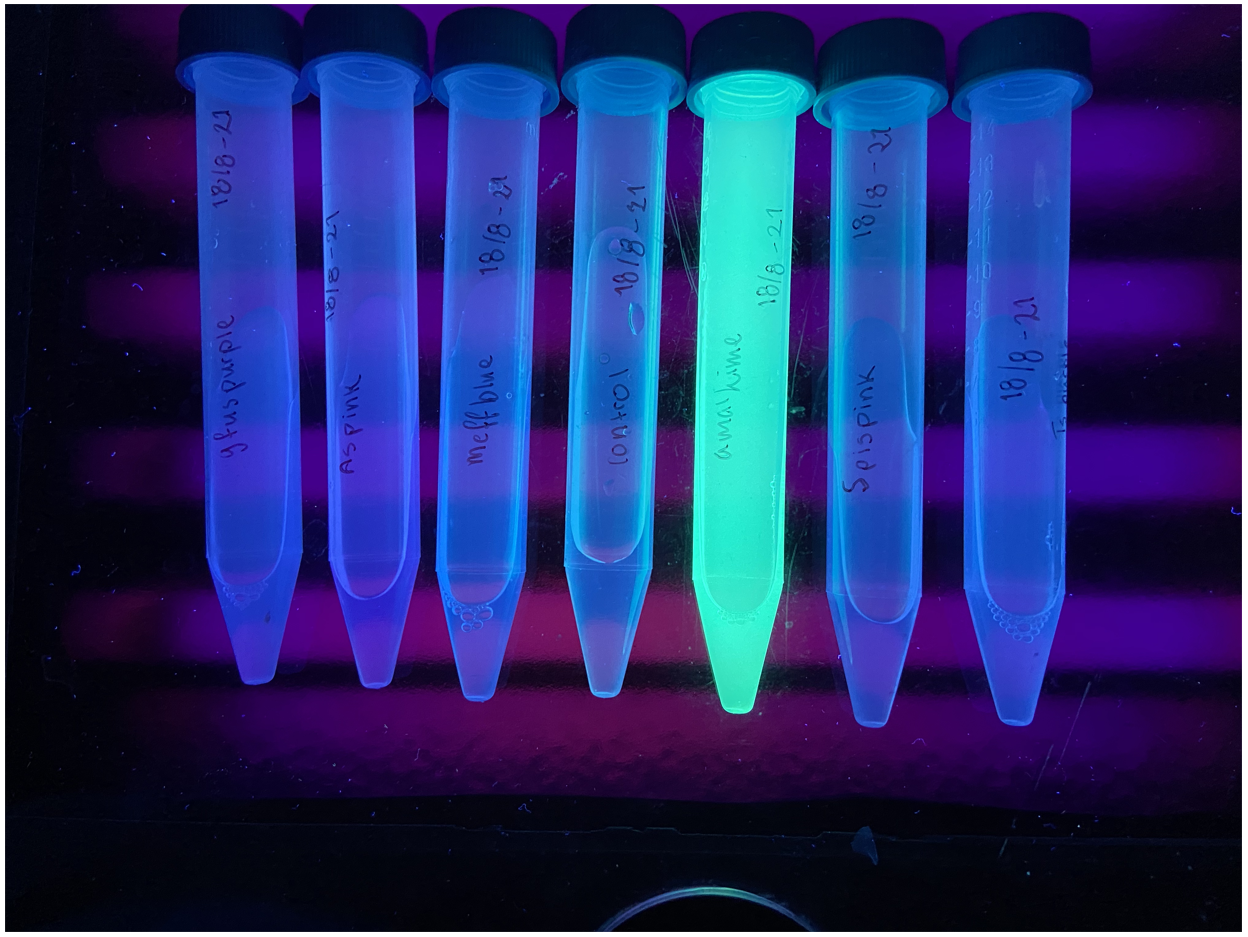 
100 μL of each sample, including the control, were pipetted into a well plate and absorbance measurements were made with a BMG Clariostar plate reader. The absorbance spectra for the control were subtracted from each of the experimental samples since the control was considered the baseline, see Figure 4. Furthermore, all data were normalized for easier viewing. Graphs were constructed using GraphPad Prism. 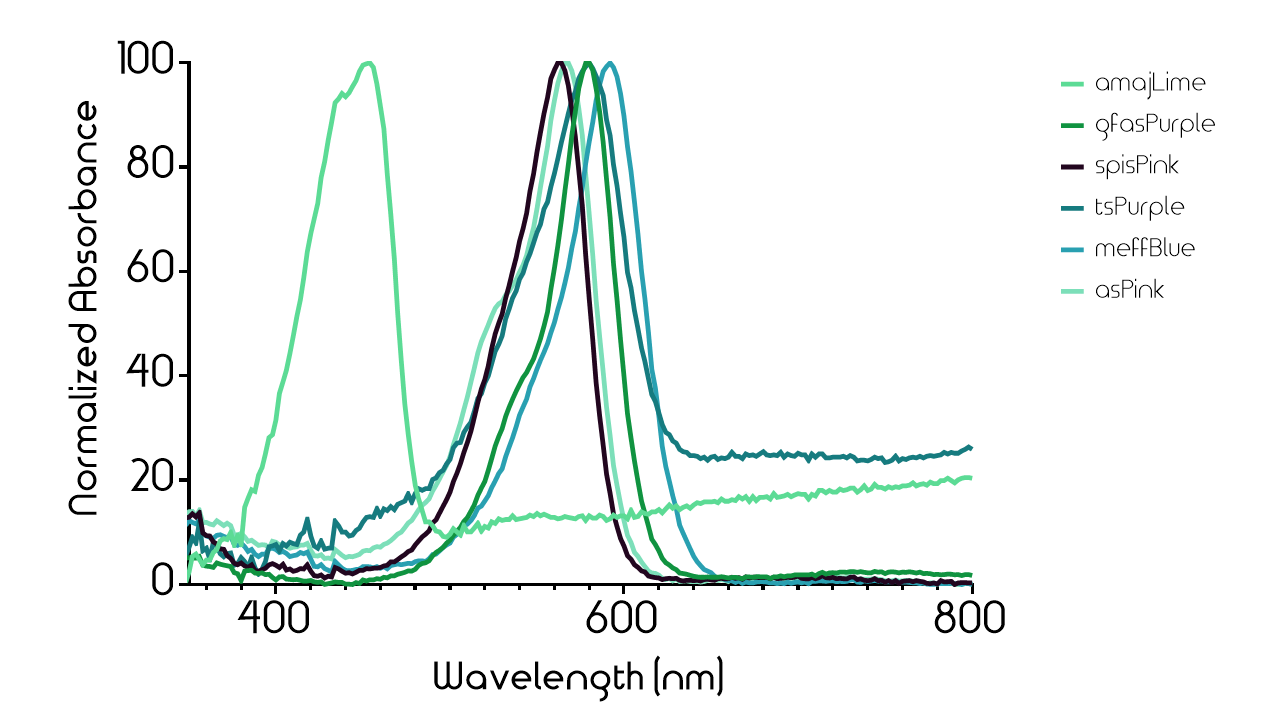 Figure 4. The normalized absorbance vs wavelength. The absorbance spectra showing the wavelength of absorbance maximum for the chromoproteins amajLime, gfasPurple, spisPink, tsPurple, meffBlue, and asPink. The data used to construct the graph were baselined, meaning the data from the control sample had been subtracted.


Following analysis of the baseline spectra and its corresponding data, conclusions of absorbance maximum were made for each chromoprotein. These results are summarized in Table 1. below. Some absorbance maximums were already noted on the parts’ Registry pages, however, we chose to include these because of reproducibility.

Table 1. The wavelength for the absorbance maximum for each chromoprotein is summarized, as well as the absorbance at the maximum wavelength. This data has been baselined against the data from the control sample.