1.1 The benefits and reasons for modeling

In the process of promoting iGEM project, there will be many problems that can not be solved through experiments. At this time, it is necessary to simplify the problem to a certain extent, and infer the problem reasonably through the method of mathematical modeling, so as to get the best solution.
In our project, we use this idea to solve the problems encountered in the experiment. At the same time, we sorted out the significance of modeling, and hope that through our modeling work, we can provide some ideas for the modeling direction selection of iGEM team in the future to a certain extent.
1: Reduce project costs and avoid unnecessary waste of resources.
2: According to the existing data, speculation through mathematical modeling and verification with a small number of experiments can ensure the accuracy and shorten the experimental time.

For our project, the output of 2′-FL produced by S.cerevisiae is different under different conditions. Therefore, it is necessary for the external environment to achieve the optimal fermentation conditions for 2′-FL produced by S.cerevisiae. Here, we selected the following main conditions to explore: time, cell density, medium type, carbon source and transporter type are all factors. However, we have a small number of S.cerevisiae, so it is not easy to use S.cerevisiae to conduct a large number of experiments to obtain the optimal fermentation conditions, which has caused difficulties for our project. Therefore, we consult the data, draw images through modeling operations. By doing this, we found out the best culture conditions of S. cerevisiae. 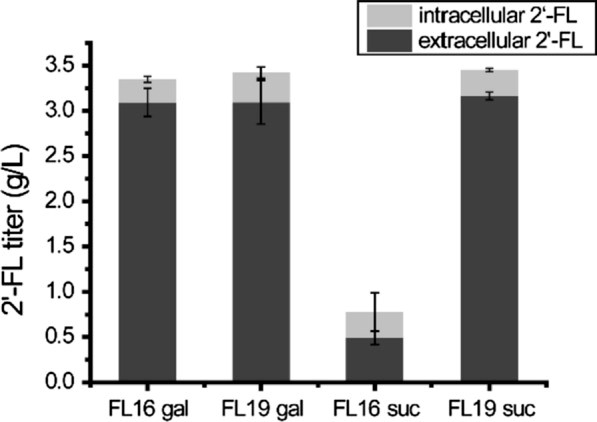 Fig.1. The yield of 2′-FL in intracellular and extracellular

It can be seen from the experimental data that the yield of 2′-FL synthesized by lactose is higher than that by sucrose. Therefore, lactose was selected as the carbon source for 2′-FL production.

Referring to previous experimental papers, we found that S. cerevisiae and Y. lipolytica lack an effective mechanism to export 2′-FL because the measured concentrations of extracellular 2′FL were always substantially lower than the intracellular concentrations in our experiments, consistent with results reported by previous study[1].

For example, the intracellular 2′FL concentration in strain HS07, grown in a shake flask using FeedBeads™ to limit the glucose concentration, was approximately 20 g/L after forty hours, while the extracellular concentration in the same sample was 0.3 g/L. Therefore, to complete our validation of these strains as potential cell factories, we sought to identify transporters that could effectively move 2′-FL out of the cell.In most cases, we focused on transporters of fungal origin because of the differences in synthesis and membrane insertion of proteins between prokaryotes and eukaryotes (Rutkowski and Lingappa, 2015[4]).

Twenty-seven candidate transporters were selected for evaluation in S. cerevisiae (Table S5). This selection was based on the transporters meeting any of the following three criteria:

1. Any evidence of ability to transport 2′-FL.
2. Fungal transporters able to transport two-, three-, or four-carbon oligosaccharides.
3. Sugar transporters where substrate export was not coupled to ATP hydrolysis, either directly, or indirectly via maintenance of metal ion homeostasis during symport or antiport. 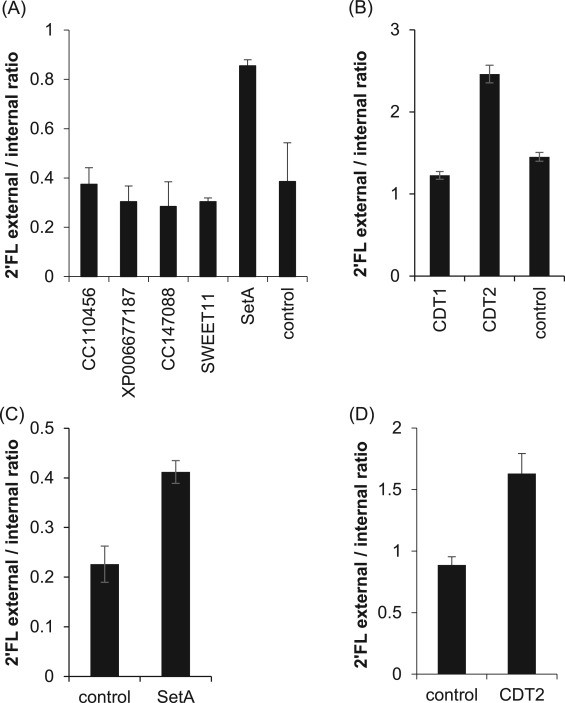 Fig. 2. Identification of transporters that enable 2′-FL export by yeast. 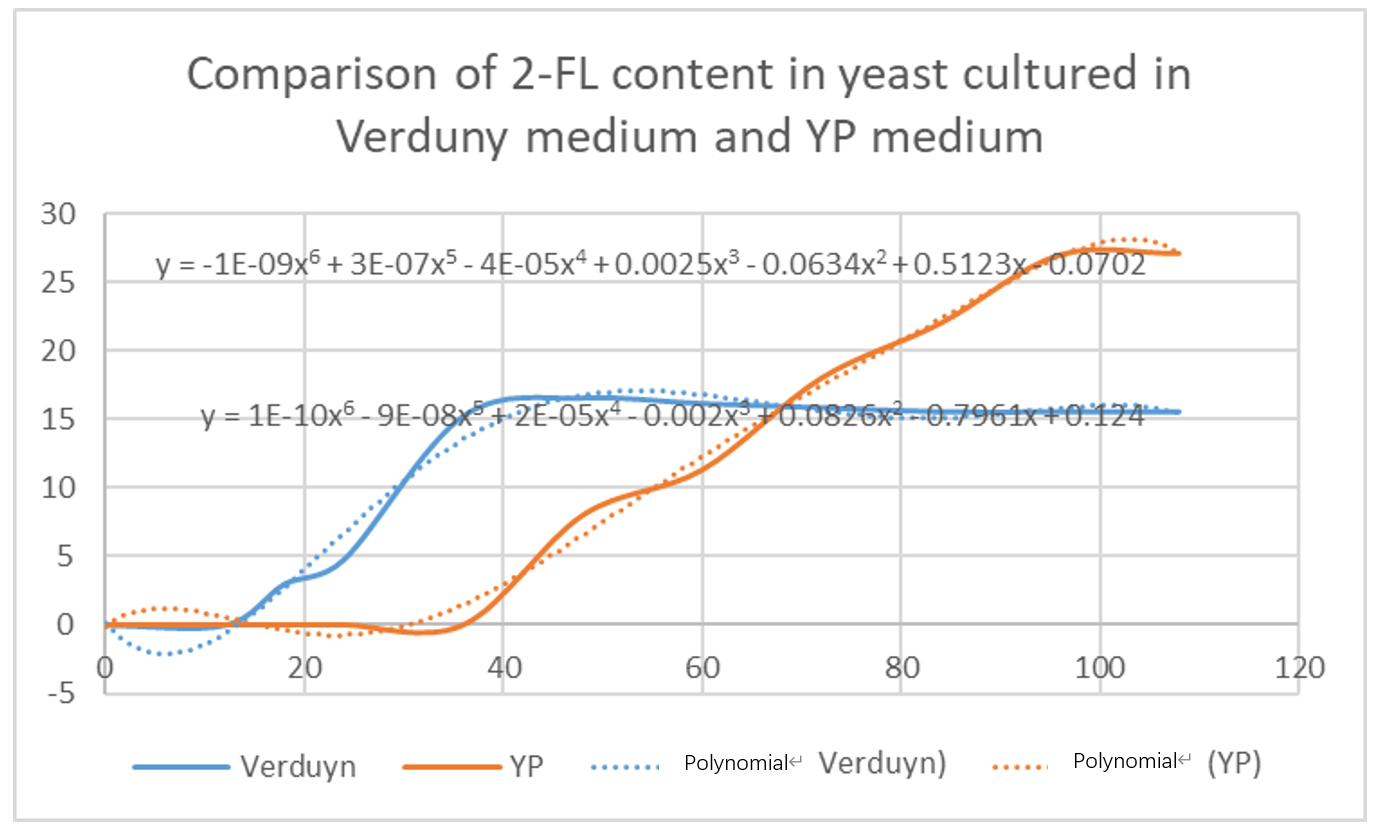 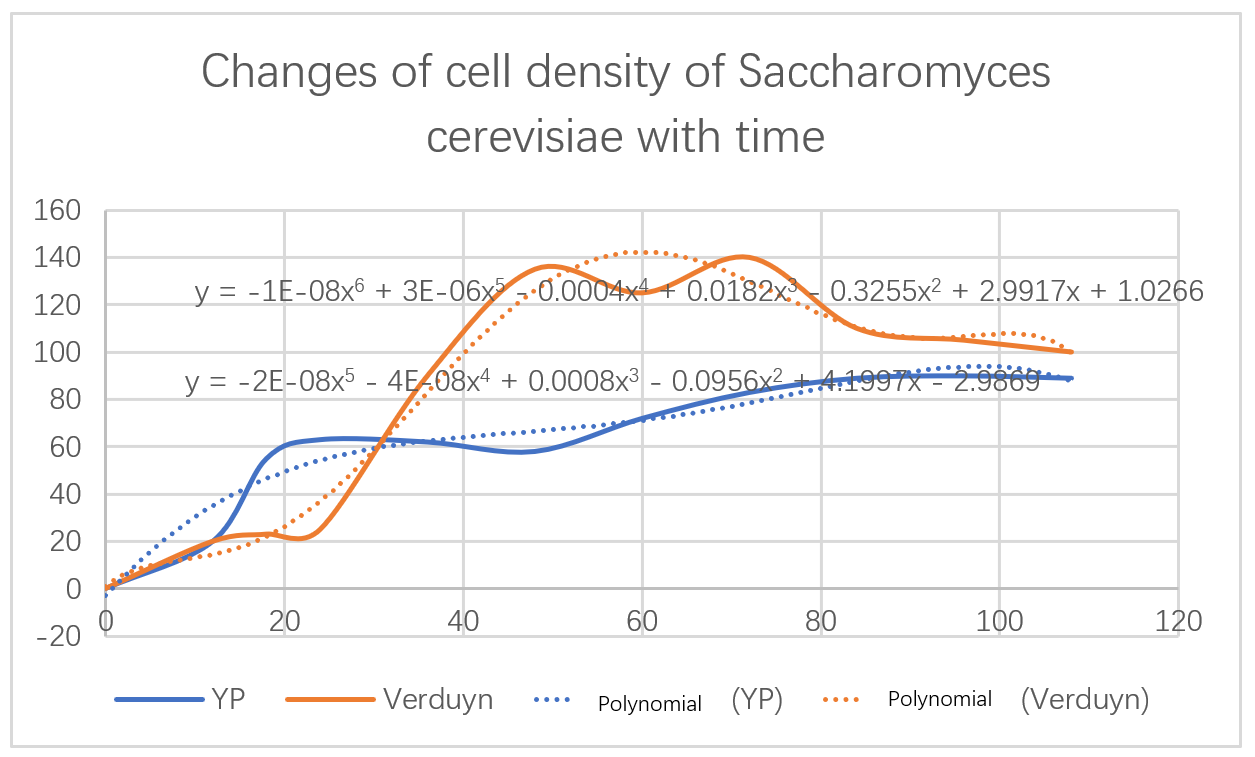 Fig.4. Changes of cell density of Saccharomyces cerevisiae with time 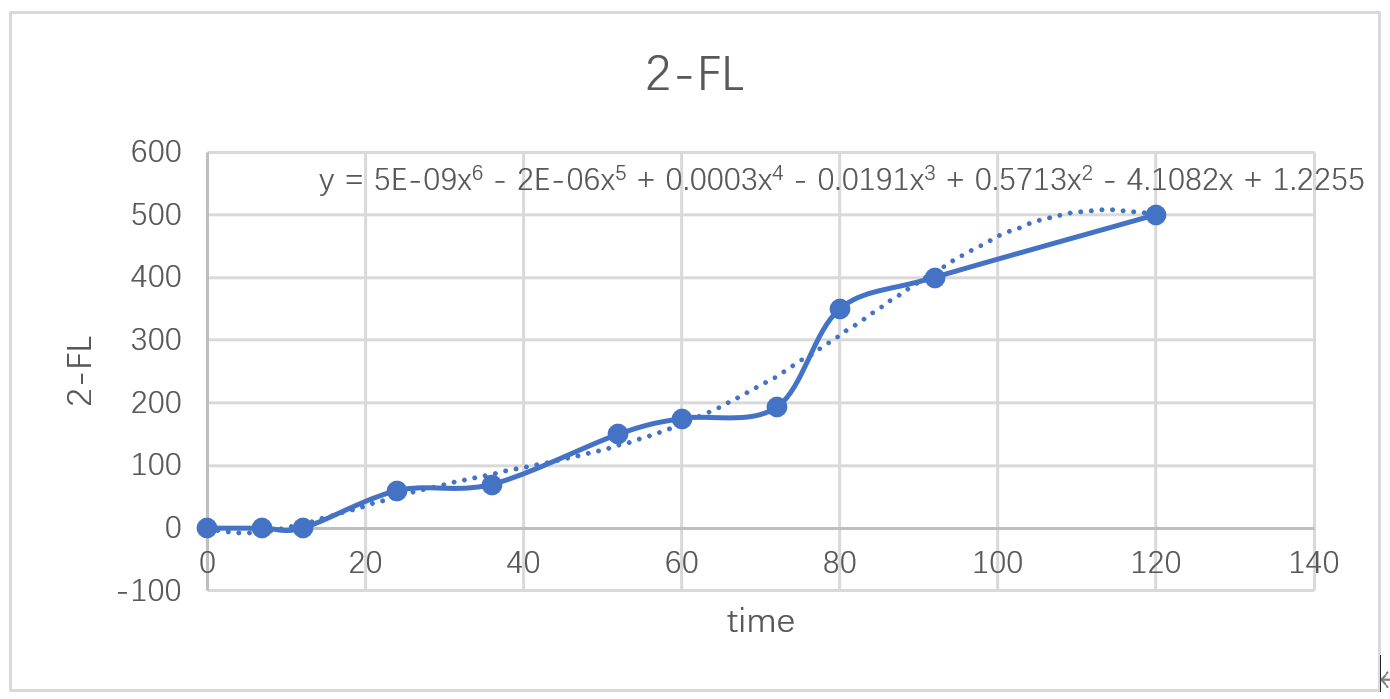 Fig.5. Change of product over time 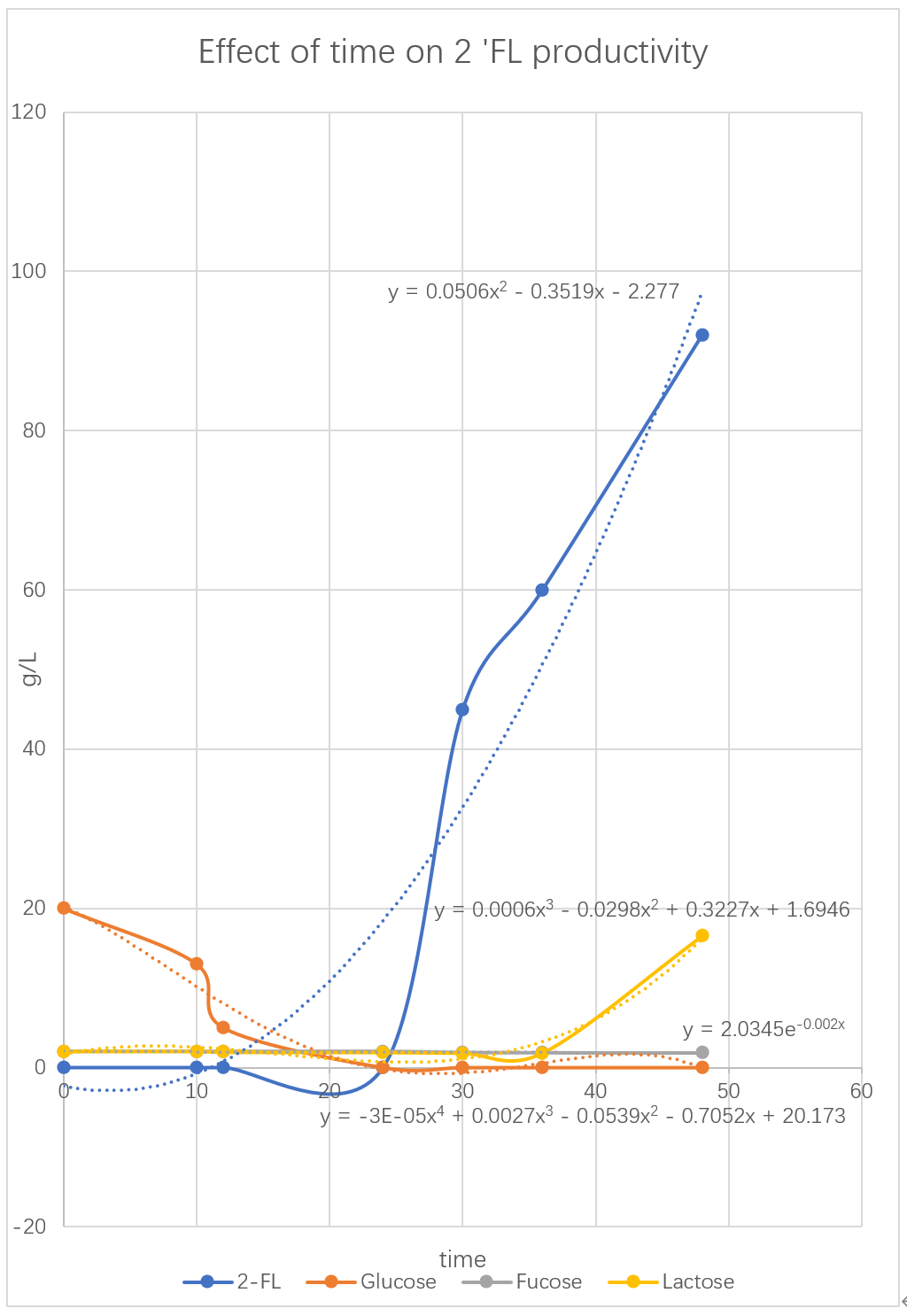 Fig.6. The amount of product under different raw material conditionsFig.5. Change of product over time

In order to verify the change of 2′-FL yield and time, the main measurement of fucose and lactose consumption (because S. cerevisiae needs to absorb both from the culture medium to synthesize 2′-FL in the cell); Data read through the result of the experiment we will after the relationship between production and time of 2′-FL summed up in Saccharomyces cerevisiae within 36 hours after the medium for its breath of glucose and ethanol is depleted, but with Saccharomyces cerevisiae, after will continue to produce ethanol itself from Saccharomyces cerevisiae will continue to use of ethanol from respiration, slow to produce 2′-FL, after 48 hours 2′-FL was no longer produced, but when ethanol was added again to provide organic matter for S. cerevisiae respiration, S. cerevisiae continued to produce 2′-FL , but the production rate decreased significantly compared with the first 48 hours, and tended to be gentle. After a large number of experiments, the yield of the first 48 hours was 0.63, and the yield of 120 hours was 0.3. So we draw the conclusion that the best yield is 48 hours in actual production. 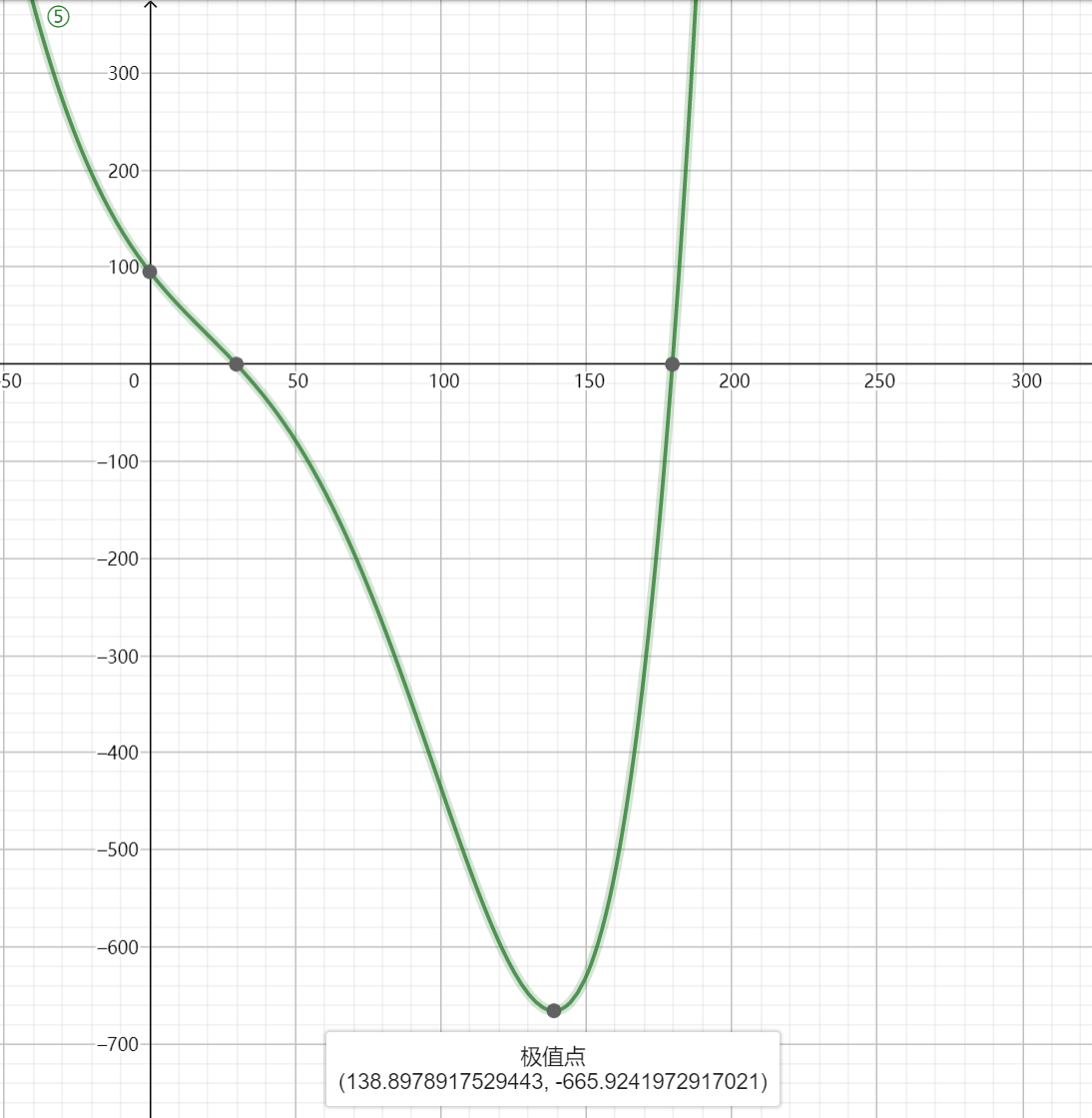 The x value corresponding to the minimum value of y in formula (5) is the optimal production time of 2′-FL .

As can be seen from the image, when x=138， y gets the minimum value. So when S. cerevisiae culture lasts for 138 hours, 2′-FL yield are considered to be the highest, and its economic benefit is also the highest, which is suitable for application in practical production.

To sum up, the best culture conditions of Saccharomyces cerevisiae are as follows: take lactose as carbon, use YP medium and the CDT2 as transporter for 140 hours.

In the follow-up project, we will also conduct relevant experiments to verify our prediction results and fine-tune them to make them more accurate. The mathematical modeling method greatly reduced our time and economic cost, and created better conditions for the production of 2′-FL by S. cerevisiae. We hope that Saccharomyces cerevisiae 2′-FL production technology will soon be available so that more mothers who are unable to breastfeed will benefit from our program and will not suffer from a lack of breast milk.

1. Our research on the relevant influencing factors of 2′-FL production is not perfect, such as temperature, pH and other conditions. More influencing factors should be further considered to improve our model.
2. There are few experimental data sources. We will continue to search for more data to make our model more scientific.
3. Due to the limited data we have selected, the specified formula may not be completely in line with the actual situation. We will continue to improve the formula we use to make it more rigorous.

Our team designed two tools using modelling to help us to achieve ideal primers and get the result plasmid after introducing genes, so that we could compare this with DNA sequencing result and confirm the target DNA has entered the plasmids and S.C. cells.

In order to do that, we choose C++ as our modelling language, since it is considered one of the best language to utilize algorithms. The code is open source and is as the followings:

primerGetter in order to get the sequence of primer, in the process of obtaining target DNA:

Output the result of plasmid sequencing after introducing the target genes: