The infant formula market observed a sharp rise in sales up to 40.8% in the period between 2008 and 2013. Thus, a new concept of infant formula has emerged, where industry try to offer the closest formulation to human milk, through the incorporation of fat, proteins and HMOs.The incorporation of HMOs in milk formulations for children is especially recommended when the concentrations or type of HMOs produced by mothers are not sufficient for a good growth of an infant, or with the objective to give additional protection against different diseases related to the child early years. 2′-FL is the most abundant HMOs. Thus, in our project, Saccharomy cescerevisiae was genetically modified to produce GDP-fucose by expressing FKP. Additionally, the insertion of Lac12 and fucT2 genes promoted the lactose permeability and transfucosylation, respectively, which contributed to the higher production of 2′-FL.

WHY USE OUR PROJECT FOR PRODUCTION?

The whole cell biotransformations, commonly known as fermentation，have acquired great importance and have undergone substantial development in the last decade. Because of its pervasive use as a cloning and research tool and its apparent suitability, Escherichia coli became the organism of choice from the outset. This preference persists and most fermentation processes for HMOs production in both research and commercial settings still use E. coli. Viable commercial production with high HMOs titers has been achieved for both 2′-FL and other HMOs are in the pipeline. However, there is no evidence that E. coli is an optimal organism for large scale HMOs production.

Preferred host organisms have a generally regarded as safe (GRAS) or qualified presumption of safety (QPS) status, have high growth rates, and possess features which reduce down-stream processing costs and eliminant ingredient quality issues. Challenges in 2′-FL production now lie with the development of efficient, cost-effective downstream processing lines to produce high quality 2′-FL. Low levels of contaminants (such as endotoxins, DNA and protein), low biomass production, and low levels of viscosity are preferable for down-stream processes. E. coli satisfies some of these requirements, but certainly not all. So Saccharomy cescerevisiae was chosen as the alternative hosts in our project. It has the following advantages:

1.It is generally recognized as safe (GRAS) and has been widely used in food and pharmaceutical industries.
2.It can avoid possible endotoxin contamination in the produced 2-FL, and bacteriophage infection in the fermentation process to produce 2′-FL using engineered E. coli.

One challenge facing all microbiological production platforms for 2′-FL is the lack of known transporters that can export 2′-FL across the cell membrane. Identified proteins such as ABC transporter can operate via a unidirectional transport process. But it consumes ATP and is therefore undesirable for a cell factory, even if it could be reversed to export 2′-FL. In addition, it is possible that 2′-FL accumulation inside the cell could compromise membrane stability and cause cell rupture. Moreover, effective expression of bacterial integral membrane proteins in eukaryotes is challenging. Therefore, development of an effective yeast biofactory for 2′-FL production is expected to require discovery and optimization of transporters that function in those species.

To solve this problem, we use CDT2 from Neurospora crassa to export 2′-FL across the cell membrane. The N. crassa cellobiose transporter, CDT2, is likely to be a good platform on which to start protein engineering to improve 2′-FL transport. CDT2 has already been shown to be tolerant of mutation by directed evolution experiments that improved its ability to transport cellobiose. The result of SDS-PAGE showed that we successfully express CDT2 in BY4741. 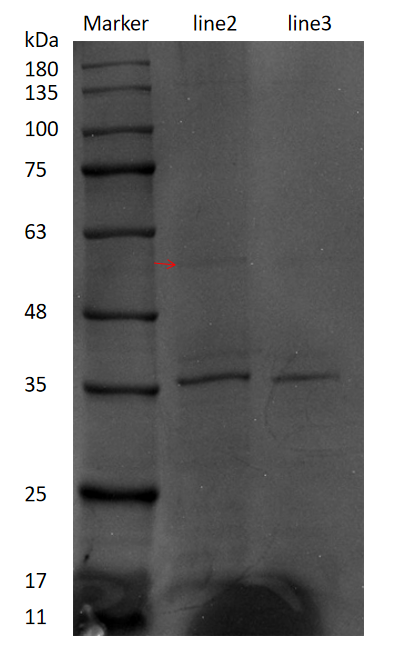 On the strain level a major issue during scale-up is the inherent genetic instability of hosts, which to a large extend is triggered by the metabolic burden of product formation. During the many generations encountered in an industrial fermentation, strong selection pressure against high product formation can cause disruption of the metabolic pathways, thereby leading to the dominance of non-producers, which is plasmid-free. Our solution is:

1.Add homology arm sequences in the plasmid and integrate the target gene into the host's genome to prevent the loss and instability of the target gene as the generations extend;

Fig.2 Integrate genes into the genome of Saccharomyces cerevisiae BY4741

2.Use different promoters to drive gene expression to prevent the interference of gene transcription caused by the same promoter and the decrease of product expression level;

3.Use an integrated plasmid to prevent the burden of transferring multiple plasmids.

HOW TO USE OUR PROJECT?

The feeding rate of the carbon source needs to be adapted to the physiology of the microorganism and the oxygen transfer rate capacity of the fermenter to avoid detrimental overflow and anaerobic metabolism. We consider: glucose and glycerol are considerable choice, but glucose can form undesired byproducts during heat-sterilization. Lactose is also a key ingredient. Although in vivo synthesis of lactose has been proposed, direct addition seems to be the preferred method. However, lactose has a relatively low solubility and is prone to isomerization to form lactulose, which makes handling and storage of concentrated lactose solutions difficult. While glycerol can be handled as a liquid at close to 100%. This reduces excessive dilution in the process and ensures higher titers — an advantage for downstream operations. So we consider using glycerol and lactose as fermentation substrates. The specific fermentation conditions are in the YP medium after 96 h or in the Verduyn medium after 120 h. Then, the extraction and purification of 2′-FL from the cell culture must be carried out. When 2´-FL are not secreted to the medium, the lysis of the microorganisms is performed, usually by sonication，but this will introduce additional product purification steps. Because the microbial production strain must be completely removed, along with expressed proteins, lipopolysaccharides, nucleic acids, and other biomolecules. Therefore, we will extract purified products from the fermentation broth to reduce the loss of engineered host.

Recent expansion of technologies for the characterization, purification,and production of 2´-FL promises successful translation of fundamental discoveries into commercial and therapeutic applications. For the laboratory, we introduced the 2′-FL production pathway into yeast, whether it is for studying the physiological effects of HMO or for production, which greatly improves the safety and convenience of the experiment. The subsequent research can use ours as a framework to screen for suitable α-1,2fucosyltransferase(FTs) or 2′-FL transporter, and then design yeast into a more efficient cell factory.
For factories, yeasts are safer and have higher genetic stability. In practical applications, our engineered host can be placed in a fermentation tank for long-term production, whether it is continuous fermentation or fed-batch fermentation, as long as a certain amount of nutrients, engineered host can continue to work.
There is no doubt that the introduction of our product into European, American and Asian commercial arenas requires regulatory approval. We have a lot of resources to use because strong competition has ensued between manufacturers since the first regulatory approval of HMO in 2015(Fig.4). After the product is produced, we will contact the food safety quality inspection department through various channels and try to contact the milk powder manufacturer to help us improve the safety of the product and better promote it to the market. 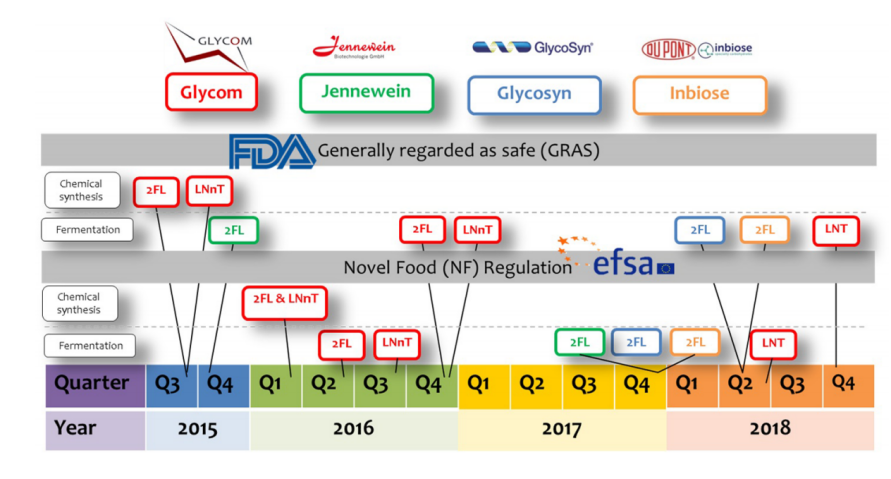 Fig.4 Summary of the regulatory landscape for HMOs

Timeline includes overview of the major HMO manufacturers, the technology utilized to synthesise HMO structures, the regulatory bodies in the US (FDA which grants GRAS status) and EU (EFSA which grants NF regulation), and highlights the progress which has been made over past number of years in achieving regulatory approval for synthetically manufactured HMO structures.

In addition, our products need more abundant ingredients as raw materials, because there are not only 2′-FL in HMOs. Therefore, we need to contact the factory to use our products as raw materials for further processing and then put them on the market. This process will be carried out in strict accordance with food production safety standards(Fig.5). Moreover, 2’-FL can also be used in dietary supplements and medical foods. 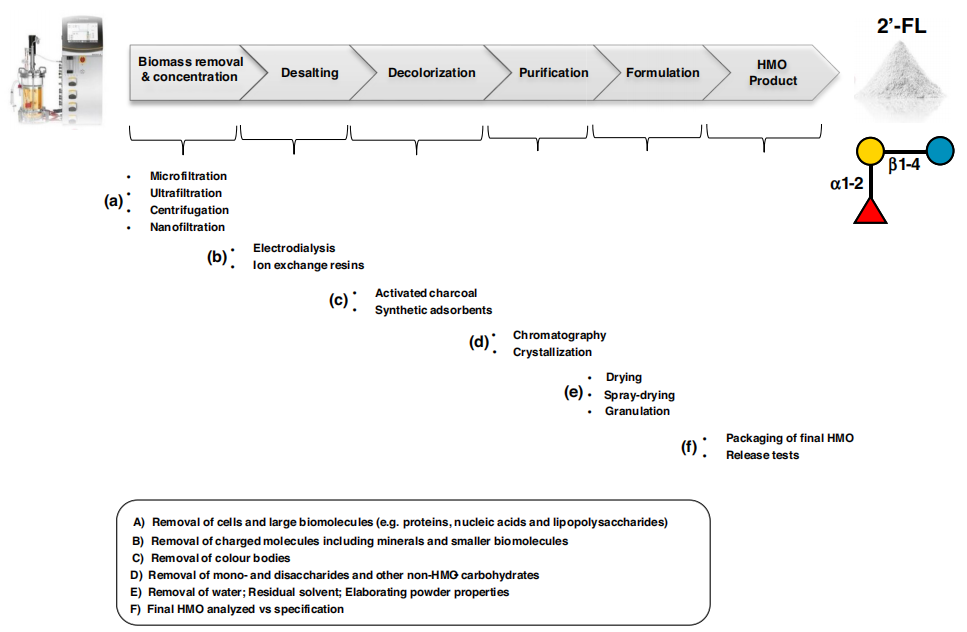 Fig.5 Example of downstream process train applicable in the purification and isolation of commercial production of 2’-FL.

HOW TO IMPROVE OUR PROJECT?

In conclusion, 2′-FL have shown excellent properties that could be used in prevention of certain diseases by boosting infant and adult health, and to support their treatment. Currently, the 2′-FL synthesis has been successfully achieved through the whole-cell. Nevertheless, further application of GRAS microorganisms at the industrial scale, would require improvements of fermentation times, purification steps and yields. Hence, the research focus of our team should be placed on the improvement of fermentation methods.

The secretion of 2′-FL to medium is still the main challenge in the HMOs production by fermentation. Therefore, identification of highly efficient 2′-FL transporters will improve 2′-FL biosynthesis and secretion. In addition, the deletion of some genes involved in the lactose assimilation avoids its depletion and allow the efficient lactose trans-fucosylation. In the later work, we will try to delete the endogenous lactose utilization gene in the engineered host to reduce the production of by-products.

A small amount of natural diversity in sources of the α-1,2fucosyltransferase(FT), including H. pylori FucT2, E. coli WbgL and B. fragilis WcfB that were reported to perform well for 2′-FL production in E. coli. E coli WbgL also was reported to have a relatively rapid (for this class of enzyme) turnover number of 4 min-1; unfortunately, it has not resulted in 2′-FL production in yeast in our experiments to date. FucT2 from H. pylori resulted in the most effective 2′-FL production in both yeasts. Therefore, our choice can be further optimized. For example, codon optimization of the WbgL gene and introduction into yeast may be able to further increase the production of 2′-FL, because so far, prokaryotes have a significant advantage in the production of 2′-FL.

After our preliminary research, the general public (especially stakeholders) are wary of the ingredients produced by genetically modified organisms, but are very interested in the ingredients in milk powder that are similar to breast milk. Therefore, the product promotion in the later stage of our project needs to be combined with some popularize science to enhance the public's understanding of synthetic biology, and with the help of official approved materials, make people realize the importance and safety of yeast as an engineered host in food processing and production.