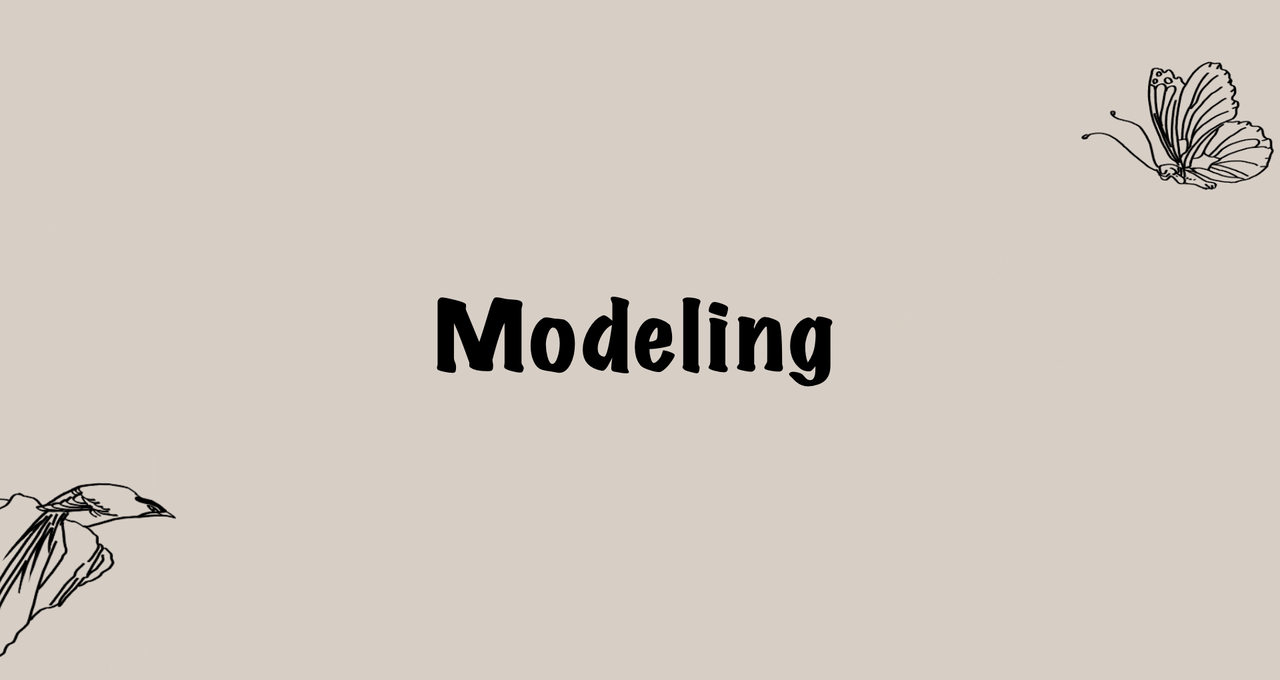 Modeling can help us better understand the process of the reaction and is a very powerful tool. With its help, we are able to simulate experiments by combining actual data results, reviewing literature, and making predictions of key parameters. In this way, we are able to quickly estimate the possible results of the reaction, thus saving a lot of time. Better still, we can use our model to optimize the experimental design plan and avoid unnecessary waste.

In our project, we used CRISPR Cas12a to detect the barcode, which is a segment of DNA in yeast spores. Using our kinetic data, we estimated the rate constants for the different reactions to create a simple ODE model. We use Michaelis-Menten equation to simulate the rate of reaction of the enzyme, and find out the best condition for Cas12a enzyme to react. After using Michaelis-Menten equation , we utilized the ordinary differential equation for every equation to display the relationship between concentration of substrate and the rate of reaction.

Chemical and differential equations are shown below:

The components of different colors in the reaction formula represent substances labeled with the same color during the reaction. 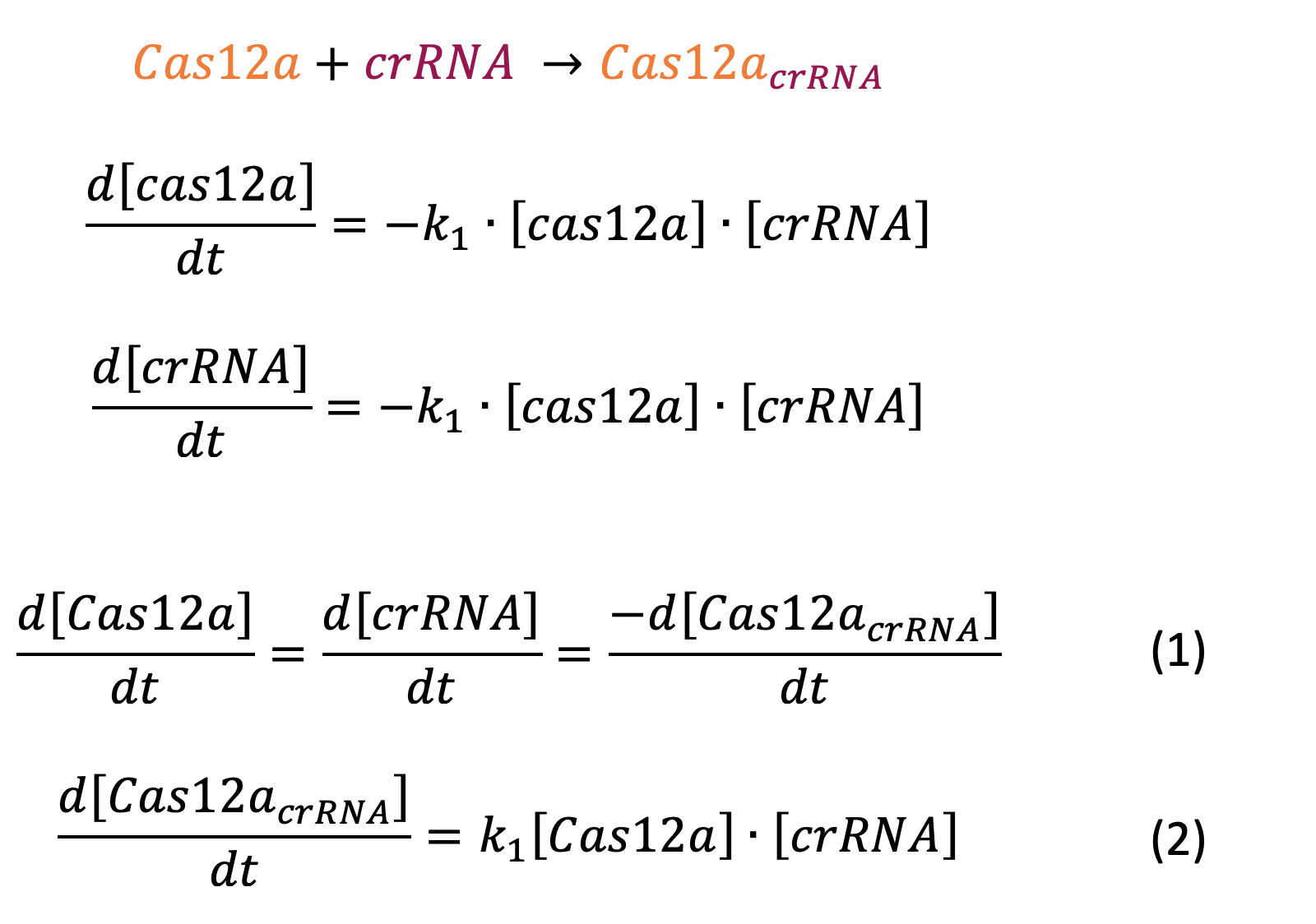 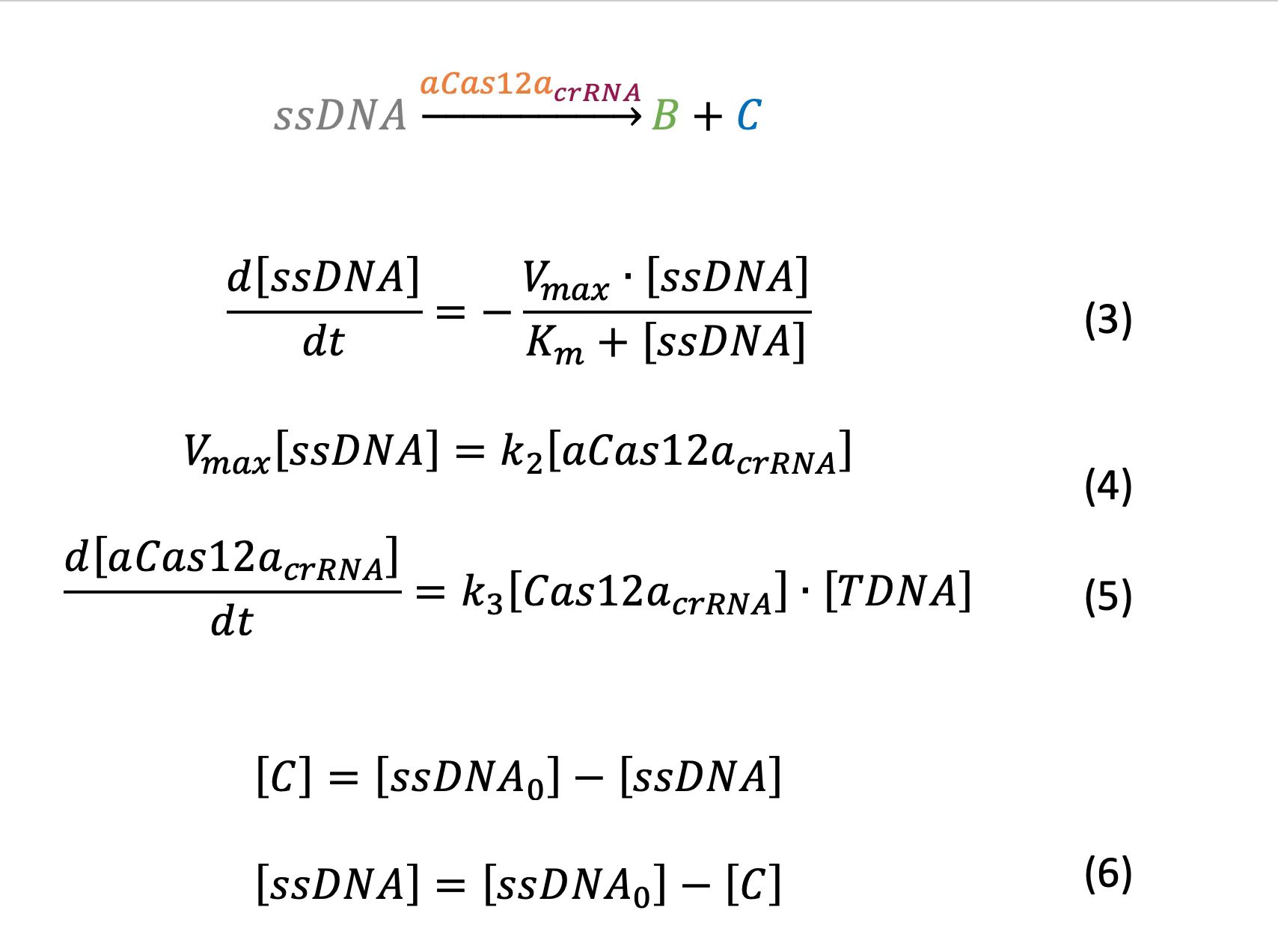 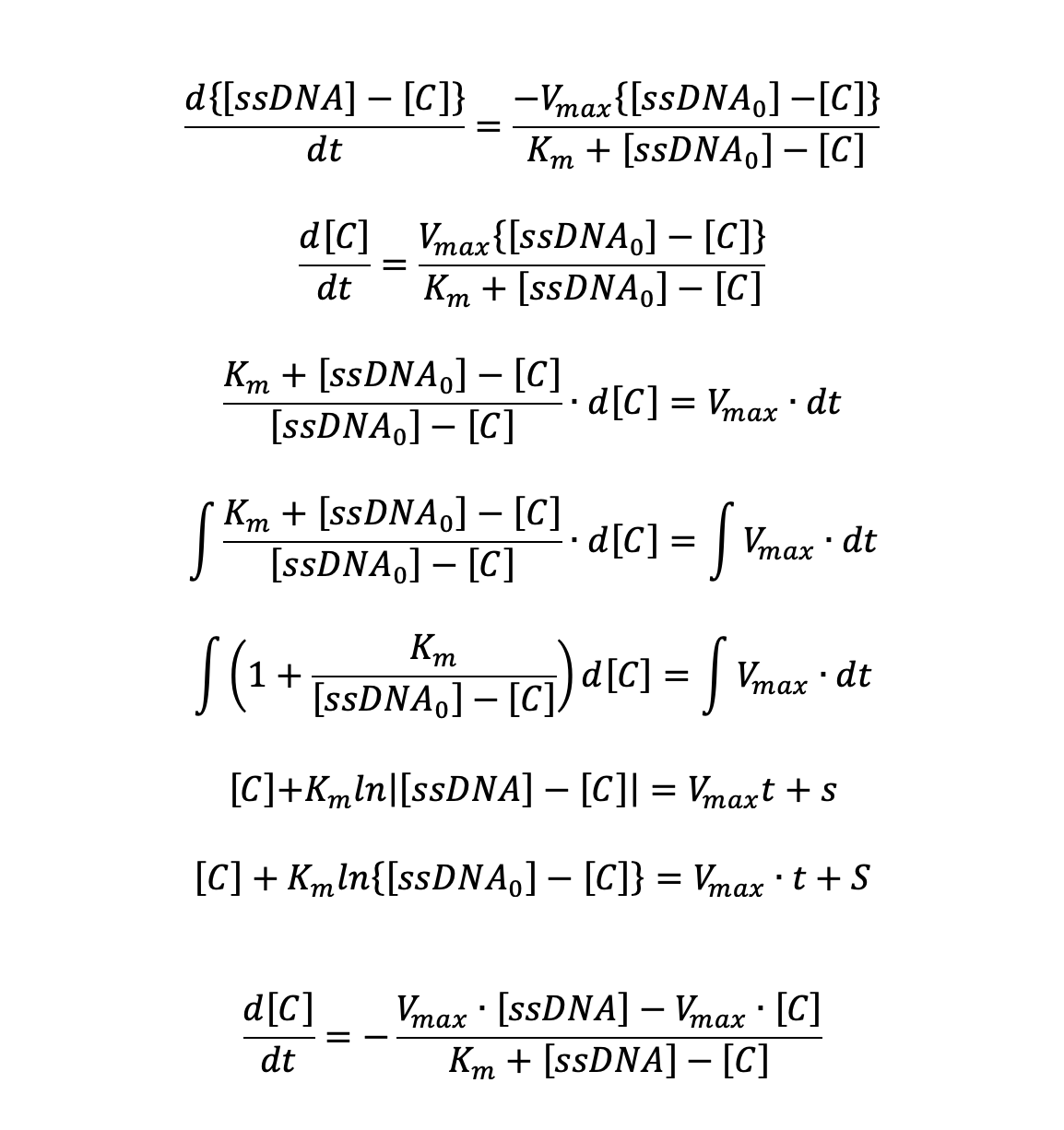 Determine the value of Km

Based on the actual measurement data, we fitted the data by Michaelis equation and obtained Km value of about 28nM. 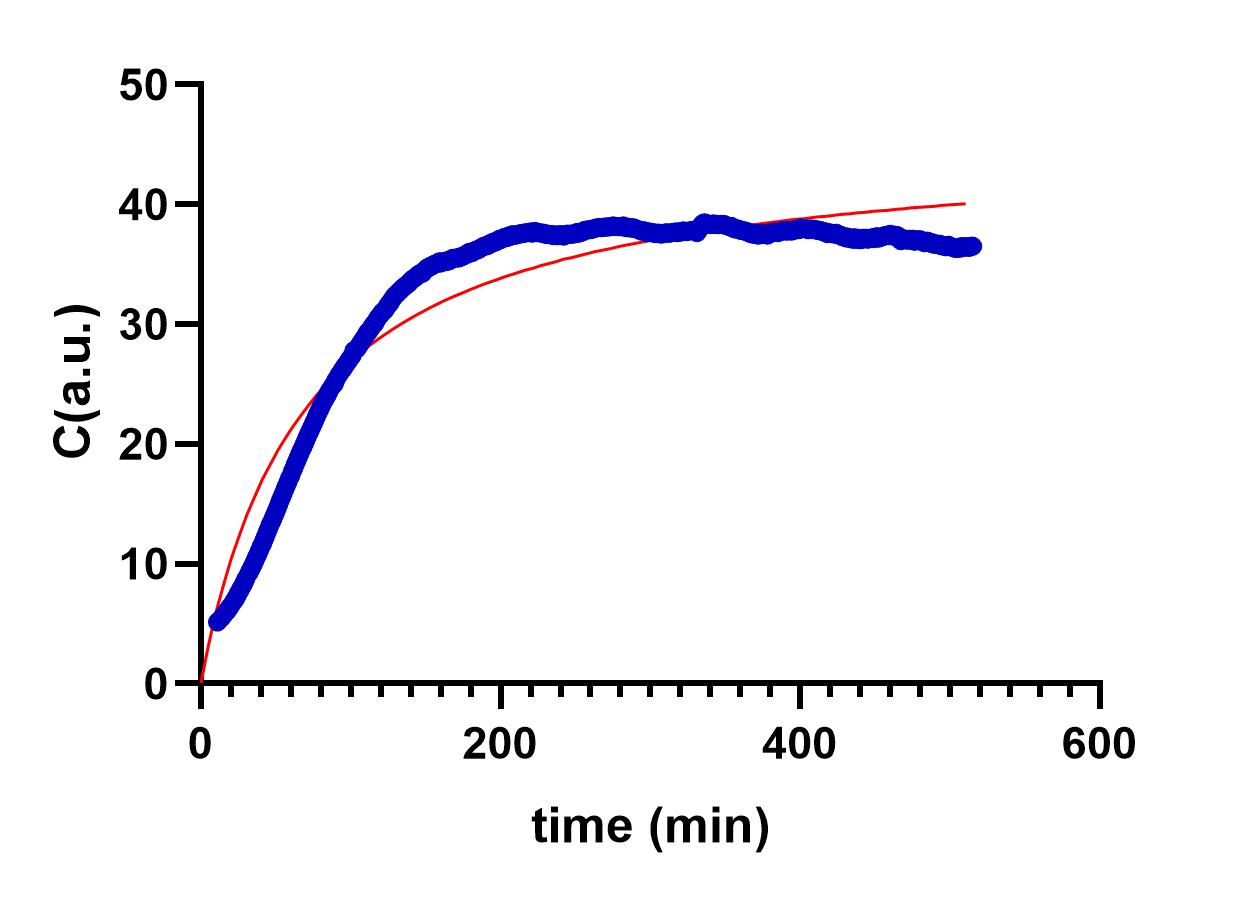 Determine the value of K2

In order to speculate the value of K2, we process out the equation using Matlab; and the graph below shows the

【fig.3】The number which has the same color as the curve represent the value of K2, unit: Min^-1 ssDNA represents the concentration of ssDNA probe we use

【fig.4】The number which has the same color as the curve represent the value of K2, unit: Min^-1, C represents the intensity of fluorescence

Determine the concentration ratio of Cas12a, crRNA and target DNA

【fig.6】The number which has the same colour as the line represents the concentration of crRNA in the system, unit: nM, C represents the intensity of fluorescence

In order to prove this deduction, we adjusted the concentration(1000nM) of crRNA that we used at the beginning of our experiment to 32nM and repeated the experiment without changing other conditions. From the result, we find that the rate of fluoresces does not have a significant decrease. This phenomenon is consistent with the expected results of the modelling.

In conclusion, by using dynamics data, we construct a set of mathematical models of fluorescence intensity with time which can be used in analyzing Cas12a detection efficiency. According to these models, the detection is most efficient and cheap when the concentration of ratio of Cas12a enzyme, crRNA and target DNA is 10: 10: 1. This scheme was also proven by our experiment.

Firstly, for the product that we sell to customers(2c), we estimate the cost for each ingredient (shows in the table below) and put them into the equation to find the total cost of spores using the equation below. 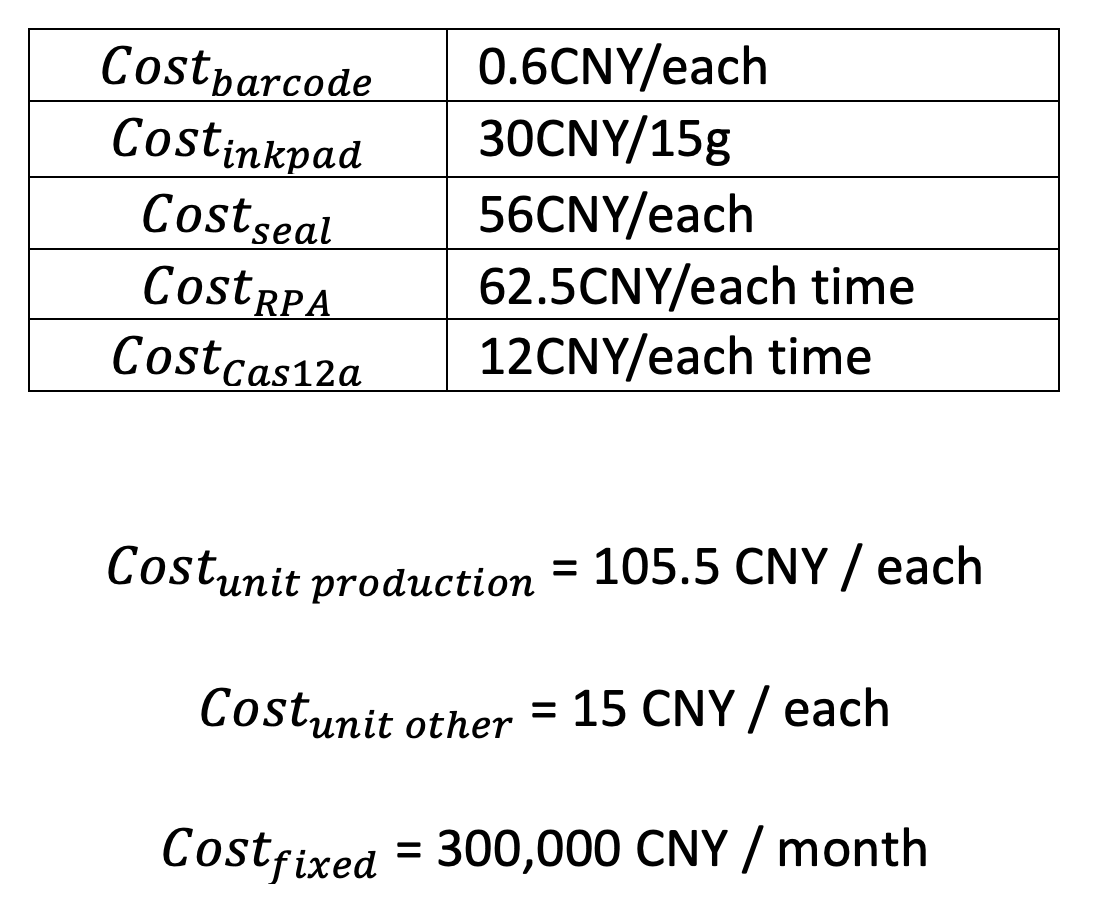 According to Constructive Cost Models, the cost of a whole set detective and tracing system (our product), which include producing spore and detection of barcodes, is 105.5CNY/each. The fixed cost for the company is 300,000CNY per month.

Next, we estimate the cost for batch production of spores. We use this type of production to reach the business cooperation. This can save the additional cost for business, as fixed and unit costs are lower.

By using the data and model above, we estimate that the cost of producing and detecting 1000 spores is 20100CNY.