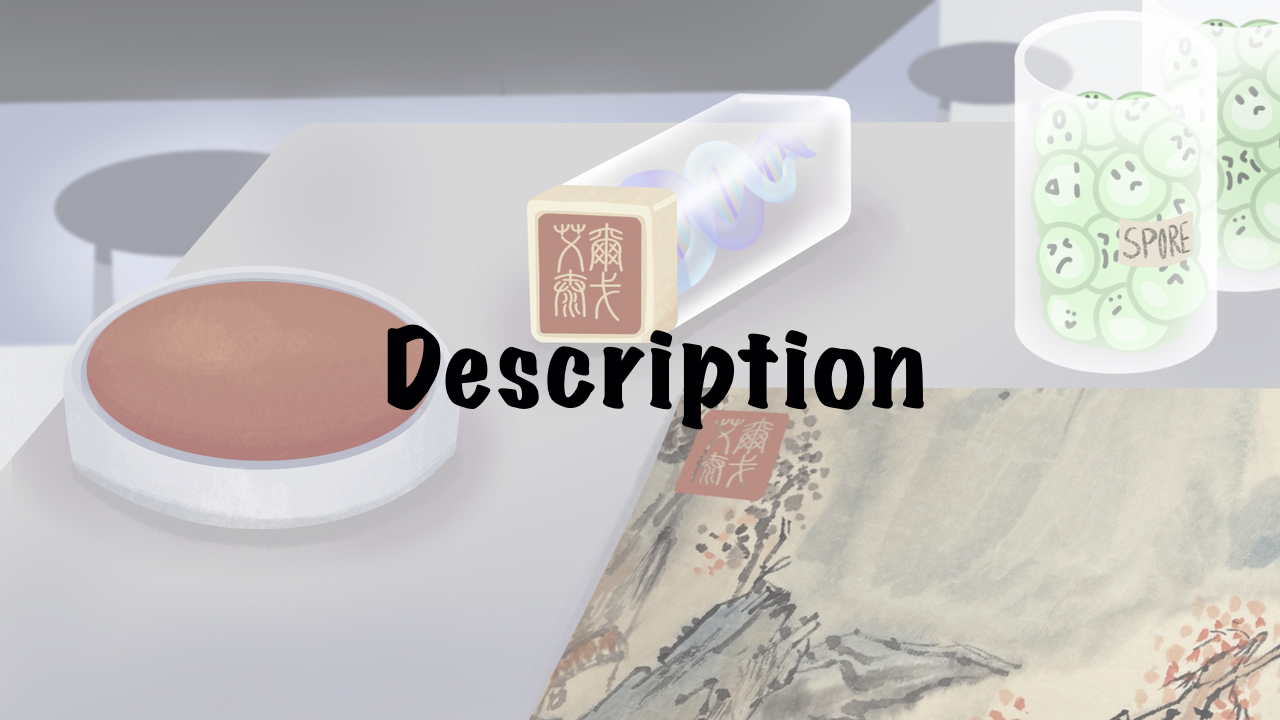 With the development of technology, counterfeiting cases happen more and more frequently, and most of them are related to the art industry.

In 2011, an obscure painting attributed to Dutch Old Master painter Frans Hals entered Sotheby's orbit. Titled Portrait of a Man, it sold for USD 11.2 million in a private New York sale. Five years later, the portrait's scandal broke. Researchers investigated the work and found modern materials on the canvas, indicating that it might be a forgery. 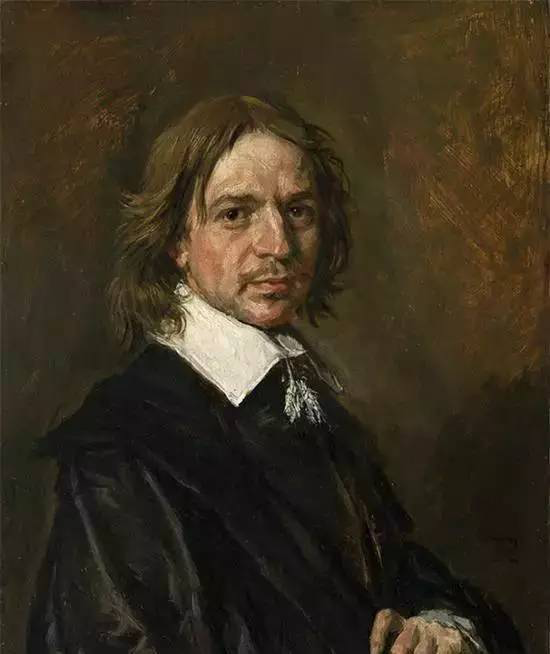 【fig.1】: Frans Hals, "Portrait of a Man", a masterpiece of classical oil painting sold by a French agent, is now considered a forgery.[1]

In 2012, a traditional Chinese painting book compiled by famous painter Zhiguang Yang and other professors was exposed as a fake book. Ironically, the muckraker was professor Zhiguang Yang himself.

In the personal statement issued by Yang, he announced that he and other professors knew nothing about this book, and they did not participate in the compilation. They did not authorize the publication of the book as well. It is a typical impostor and infringement, Yang said. 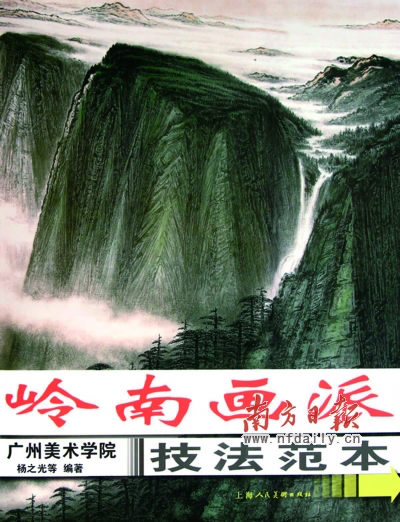 【fig.2】The Model Techniques of Lingnan Painting" was revealed to be a forged book, and Yang Zhiguang lamented that 'there are fakes everywhere.[2]

In 2018, the Telegraph reported that a collection of 21 paintings by Amedeo Modigliani, which were on exhibition at Genoa’s Palazzo Ducale, were announced as fake aside from one. Marc Restellini, a French expert on Modigliani, believes that there are over 1,000 fake Modigliani paintings in the world. The exhibition closed in July, and the paintings were handed over for investigation.[3]

By some estimates, 40-50 percent of paintings in auction houses today are frauds. Now, more than ever, art authentication is a necessary service.[4]

Various anti-counterfeiting technologies are being developed to solve this problem, but none of them are perfect. Nowadays, the most common method of identifying authenticity is through manual observations of the artists’ signatures. However, this method is usually too subjective to make the results convincing. It is easy to conceal fraud by forging authentic handwriting.

Stamp is a traditional Chinese anti-counterfeiting method, in which a unique design is carved on wood or stone and then pressed onto paper using an ink pad. In traditional Chinese painting, all professional Chinese artists have their own personalized stamps, engraved their names on the stamps to achieve signature security. Apart from China, stamps as a anti-counterfeiting method is used widely over the world. For example, in America, official seals are still mandatory for real estate documents, company transfers, and other significant business activities in many states. 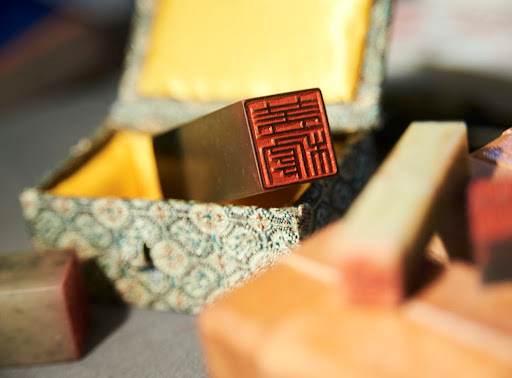 However, traditional stamps still have obvious defects.(fig.3) First, seals are easy to imitate, especially after the appearance of high-accuracy scanning machines which can easily figure out the details designed to prevent counterfeiting. Besides, stamps can only carry limited amount of information. It only contains information such as name and date. Therefore, we want to improve the current stamps anti-counterfeiting method through synthetic biology.

In our project, we develop a system called barcoded microbial system, a scalable, safe, and sensitive system that uses DNA-BMS mixtures to permit the determination of object provenance and status of object. We design barcodes and insert them into the genomes of Saccharomyces cerevisiae spores. The BMS can be manufactured at scale using standard cloning and culturing techniques, inoculated to surfaces by spraying. To identify barcodes, BMS sampled from objects can be lysed and decoded with cas12a detection. This spore is added in stamps used as an untagible anti-counterfeit label. 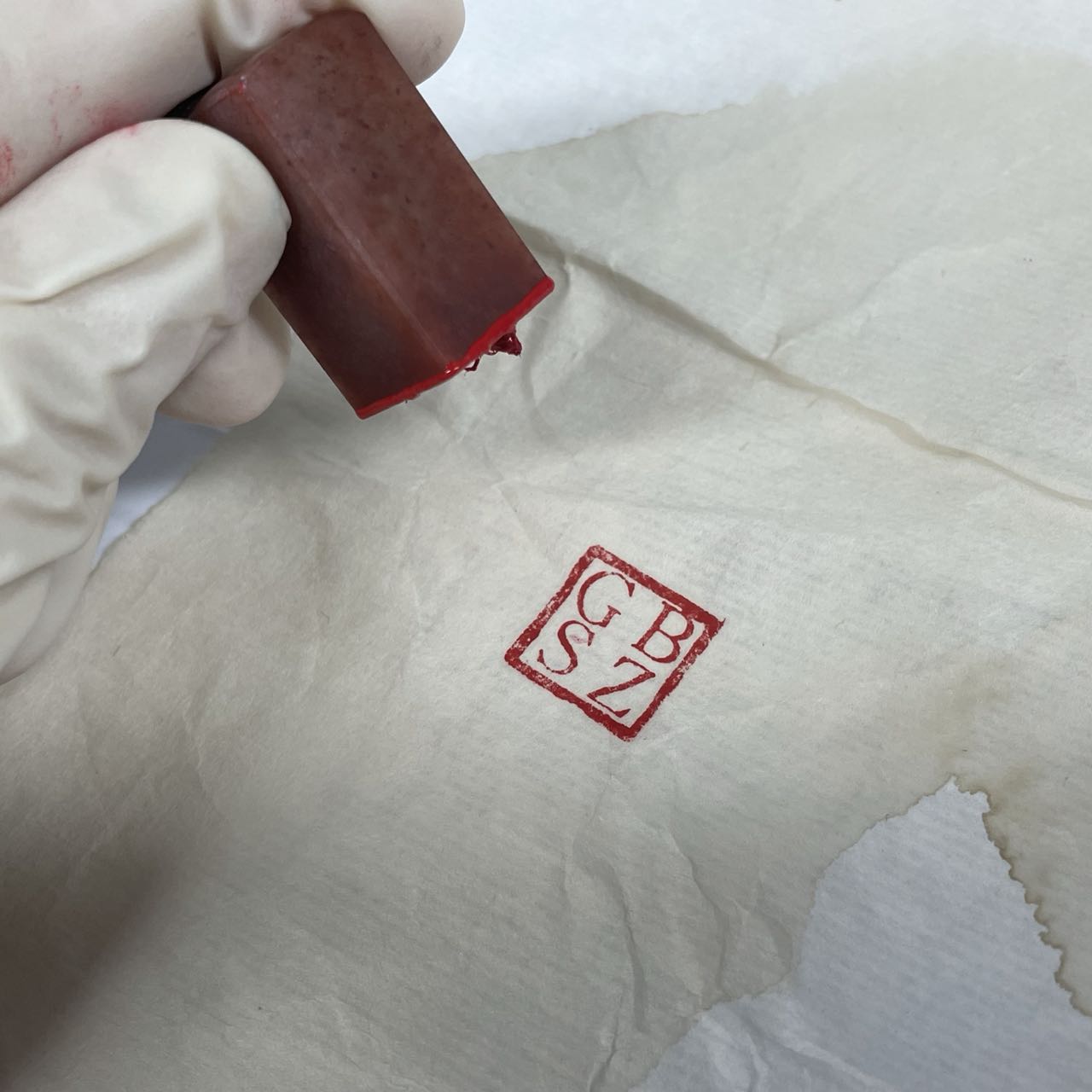 【fig.4】The stamp we created by ourselves

We first construct some barcodes with specific meaning insert into Saccharomyces cerevisiae BY4741 for spores production(fig.5). We used spores as our barcodes carriers because spores have high resistance to high temperature, strong acid and alkaline, great adhesion.[6] Therefore, spores can also exist on the surface of the object though they are in extreme environments or thousands of years. In some harsh environments such as nitrogen deficiency and non-fermentable carbon source, yeast tends to form spores to protect itself(fig.6). In order to make yeast spores, we use potassium acetate and glucose to simulate the bad natural environment. 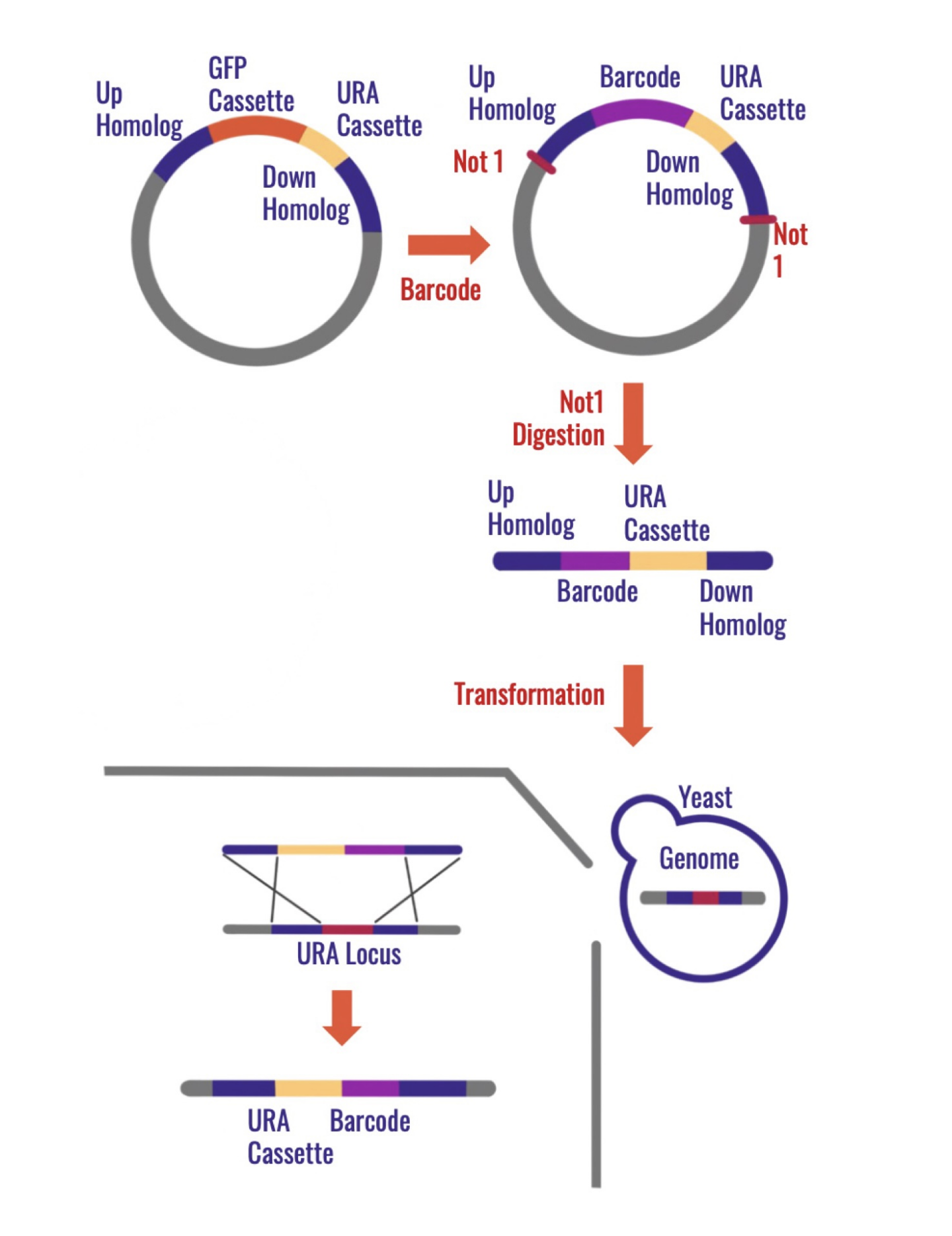 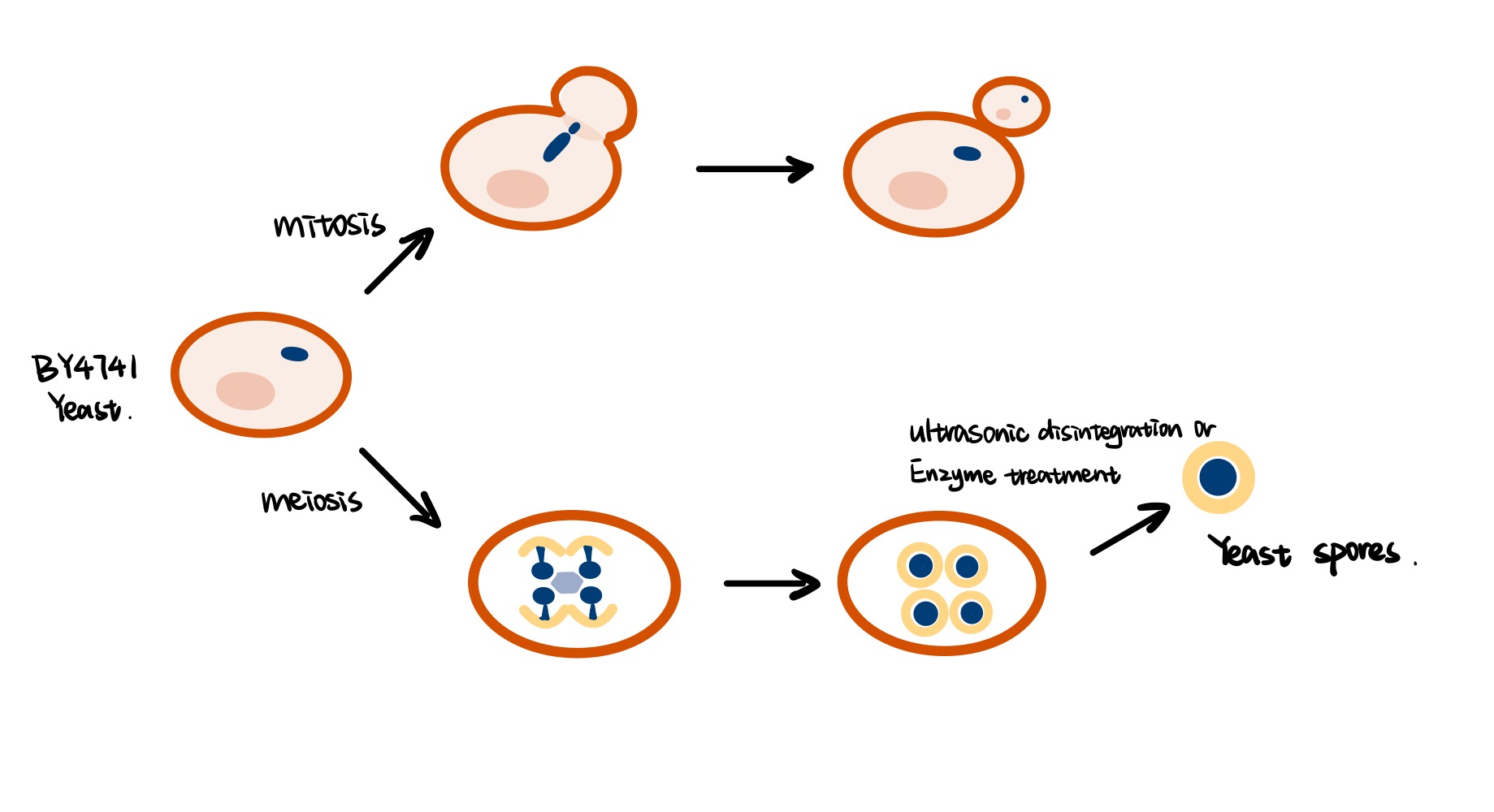 【fig.6】Overview of the stages of spore formation

In addition, we create ODE models finding out the most efficient and cheap ratio of cas12a enzyme, crRNA and target DNA in system for cas12a detection.

All in all, we create a brand new anti-counterfeiting method, Artag, by utilizing the property that DNA can store a lot of information through the varied nucleotide sequence. According to our research, our project has great marketing potential due to its urgent requirements, diverse ways of use, and long-lasting time. We hope that we can finally apply our product to the real world.