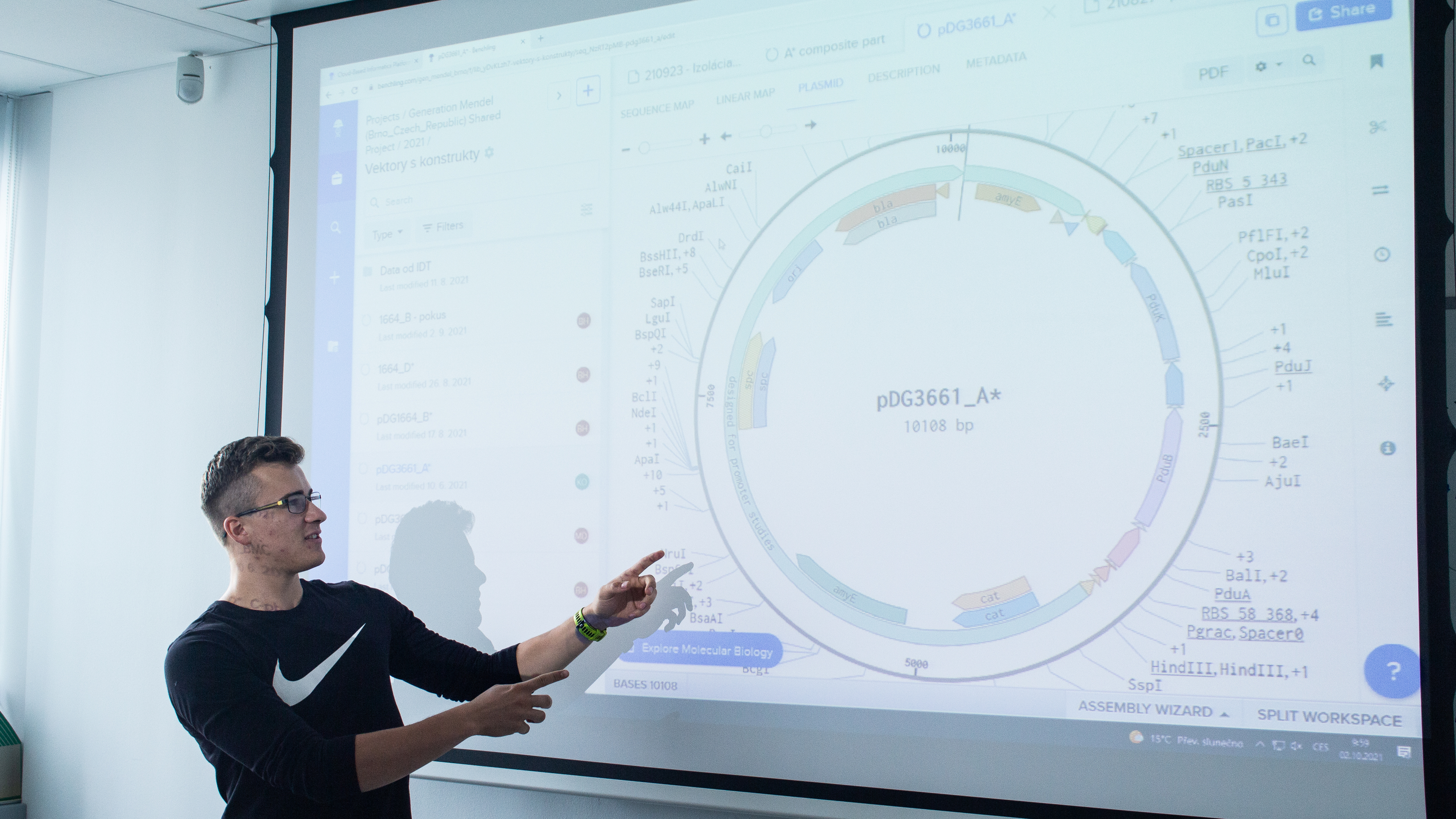 Phosphorus is an important structural and functional element found in all living forms. This irreplaceable element circulates through the atmosphere, lithosphere and hydrosphere, and its accessibility greatly influences the extent and composition of the biosphere. For example, in Earth's development, the amount of phosphorus has influenced the abundance of primordial algae and thus the rate of our planet's oxygenation.

Since the last century, the phosphorus cycle has been greatly altered by human activities. The previously very limited and slow circulation has changed beyond recognition within a few years. Phosphorus is currently obtained from mineral resources, which are of course limited. Up to 90% of thus obtained phosphorus is utilized in agriculture and food production. The use of phosphorus in fertilisers has significantly increased the amount of phosphorus circulating in the ecosystem, especially in agricultural areas. From soil, phosphorus is washed in large quantities into freshwater bodies and coastal waters. This causes eutrophication of the waters and excessive growth of cyanobacteria and algae This results in the decrease in water quality, which affects humans and aquatic animals alike. 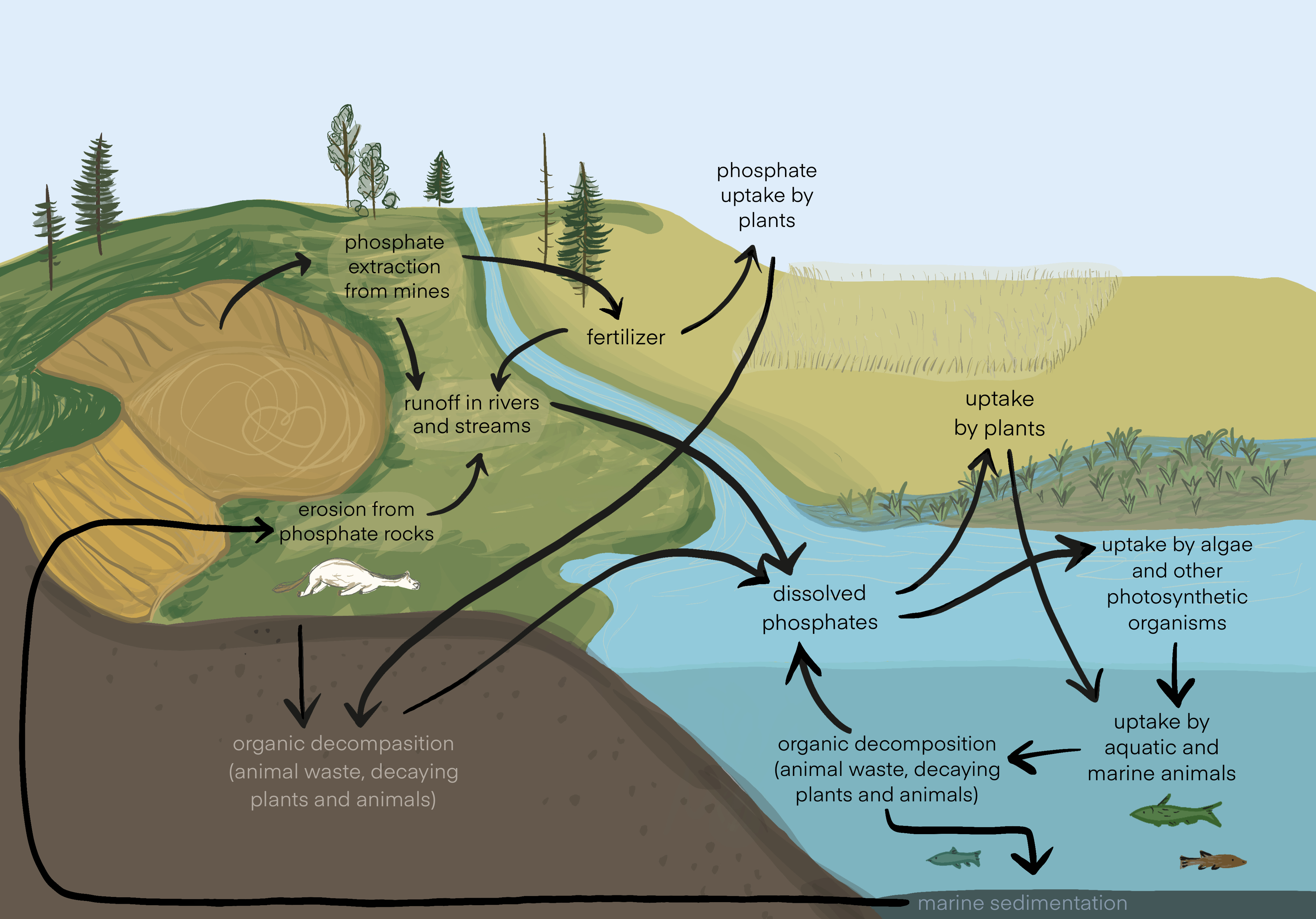 With current agricultural production, the use of phosphorus in fertilisers cannot be avoided and slowly but surely our limited phosphorus reserves are disappearing to the bottom of the seas and lakes. Moreover, it is almost certain that phosphorus consumption will continue to rise. The reasons for this are the growing population, and the ever increasing demand for meat and dairy products, or perhaps global warming as the demand for large quantities of fertilizers rise with worsening conditions for crop production. This trend is already evident. The price of phosphorus is rising and the largest phosphorus mine in the US is expected to exhaust its reserves in the next 20 years. Some even speculate that if there is another world war, there will be a war for access to phosphorus reserves. Whether this is just speculation or a prediction of a bleak future, it is clear that new technologies and phosphorus recycling are increasingly important. This is where our project comes in.

In our iGEM project we aim to tackle this issue by developing a device that uses engineered bacteria to sequester phosphates from polluted waters and recycles it for plant fertilizer.

For our project, we've chosen the bacteria Bacillus subtilis. It is a non-pathogenic microorganism, which is accustomed to lower temperatures, so it should be able to prosper in various water bodies. It's native strains can also form biofilm, which will become relevant later on. 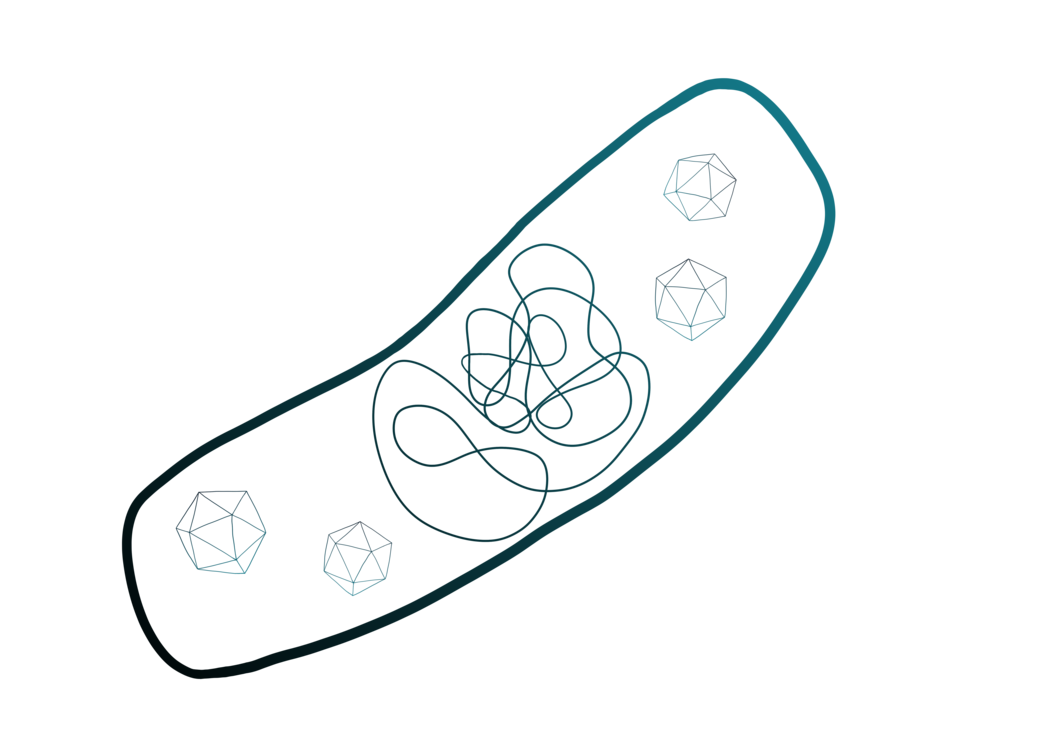 BMCs or Bacterial microcompartments are large hollow protein complexes in which some bacteria enclose certain biochemical reactions. As a result the reaction is separated from bacteria’s cytoplasm and can thus take place under specific conditions. The products of this reaction can also remain in the microcompartment and are thus protected from digestion by other enzymes in the cytoplasm. 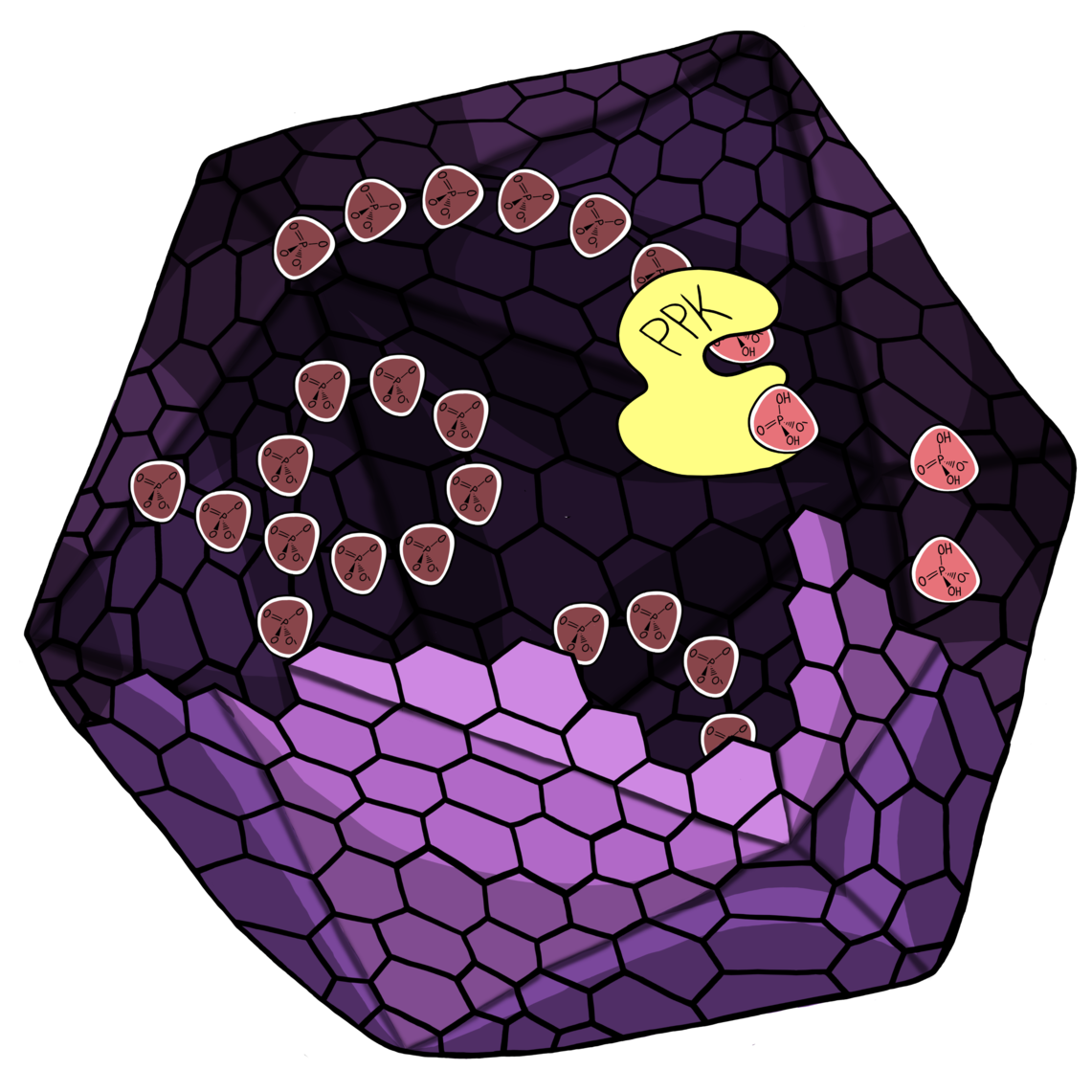 The production of BMC can however be quite exhausting for our bacteria and can significantly slow down it's growth and replication. An elegant way of ensuring that our bacteria have space to grow and replicate and that phosphate levels do not decrease too much is to make the bacteria respond to the changes in local phosphate concentrations and induce the formation of BMCs only at a threshold level in order to relieve the burden on bacterial metabolism.

Bacillus subtilis already has a signalling pathway which governs it's reaction to phosphate levels. The Pho pathway is activated by low phosphate concentrations and triggers the expression of a number of genes in order to increase phosphate intake. We will place the gene which encodes C1 repressor under the control of the Pho promotor which is activated by this pathway. As a result, the Pho pathway as well as the production of C1 repressor will be activated by low phosphate concentrations. This repressor will then get recruited to the promotor sequence of our BMC genes and turn off their production. For this purpose, we have altered the sequence of Pgrac promotor to allow our repressor to bind to it and repress its activation. Pgrac is an inducible promotor which works well in B. subtilis. 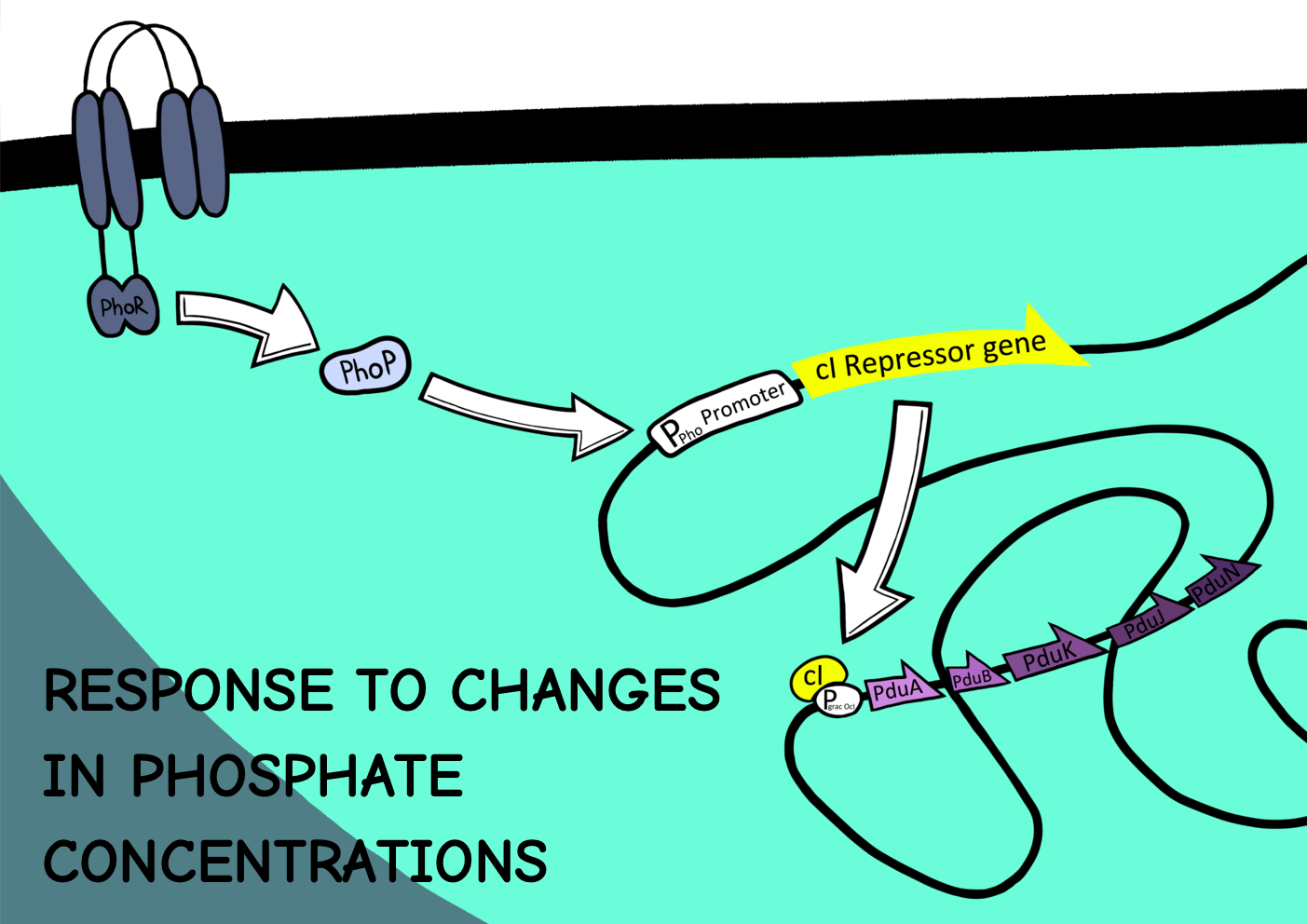 Creating good environment for our bacteria and preventing their escape

Biofilm is created by bacteria and is used for adherence, communication and protection. Some bacteria secrete polysaccharides and certain fibrous proteins to form this environment. Bacteria which are surrounded by biofilm can more easily obtain their essential nutrients from it while also getting a certain level of protection.

Our genetically modified bacteria could thus be mixed with native B. subtilis strain, which is capable of biofilm production. As a result, they will benefit from biofilm without needing to strain themselves by producing it. The biofilm will be 3D printed into a suitable shape to maximize the efficiency of phosphate harvesting. If the bacteria inside the biofilm are no longer alive, it could be used as a fertilizer in its entirety. Accumulated phosphates could thus be reused and recycled. 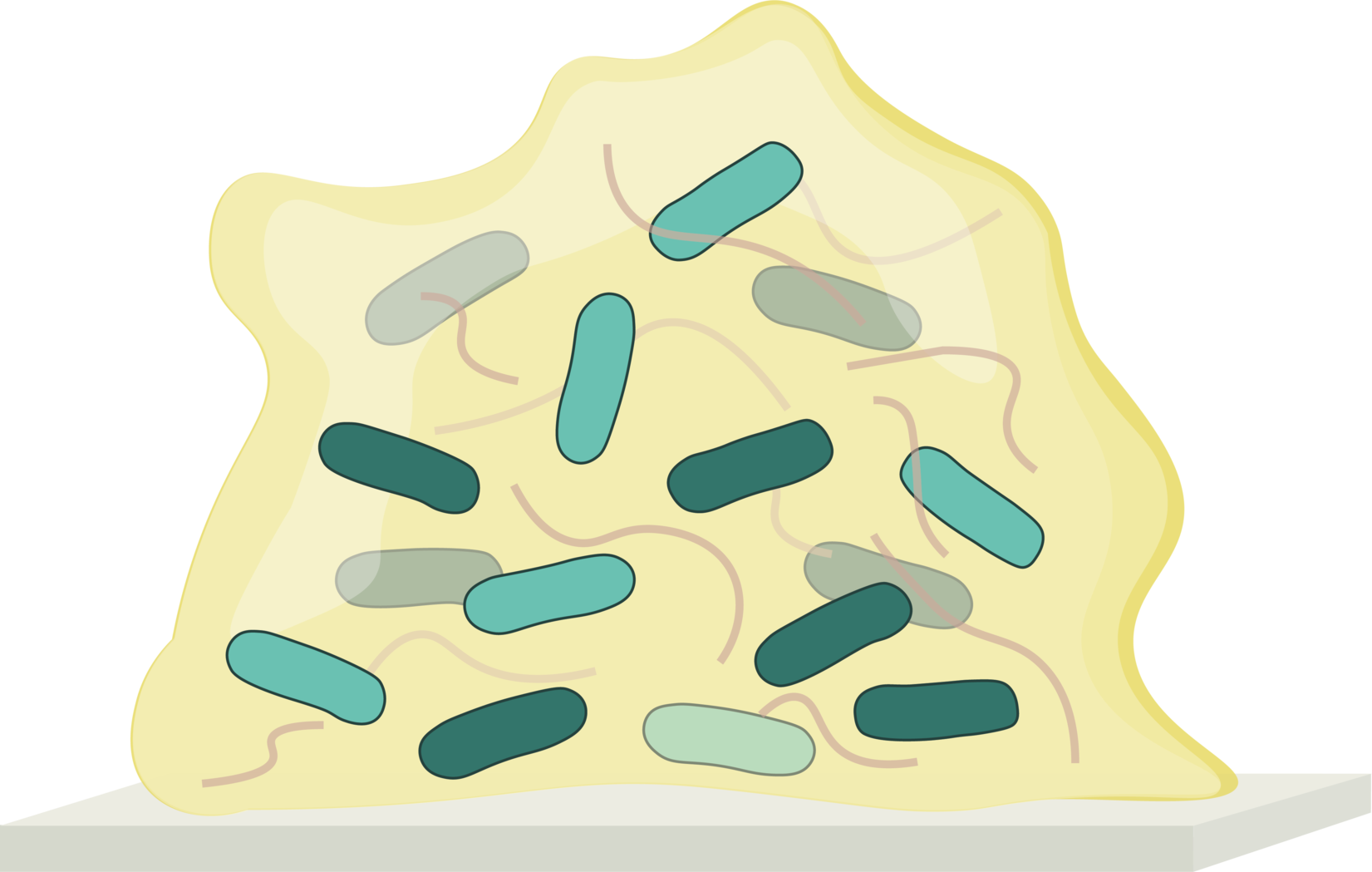 To be able to create functional structures in a time and money dependent environment, modeling is required. This process helps to predict if it is possible to create the desired structure and simulate its behaviour without the need of consuming resources. Modeling can detect possible weaknesses or errors in a structure without constructing it.

Since the iGEM competition focuses on the creation of completely new genetic constructs, we, like probably every team, came across a completely new sequence that we wanted to explore in more detail. The first and only information we had was a 1D amino acid sequence. Since proteins occupy a 3D conformation that assigns them their unique properties in the organism, it is more than useful to know it. For the purpose of creating a 3D structure from 1D, the AlphaFold tool is used. We applied the Amber tool to the resulting 3D representation, which, according to the parameters given, created a trajectory of the events taking place in the system. Virtually anything that is needed can be applied to the resulting trajectory. In our case, we investigated the transport of substances into our BMC.

What makes our solution unique?

By combining BMC production with phosphate biosensor, we will increase the fitness of modified bacteria and thus create an organism capable of efficiently producing BMCs without the need of outside induction. Our project will aim to combat cyanobacterial overproduction while also creating an innovative way of harvesting and reusing phosphates as components of plant fertilizers.

Phosphorus: Essential to Life—Are We Running Out?. State of the Planet [online]. Available at: https://news.climate.columbia.edu/2013/04/01/phosphorus-essential-to-life-are-we-running-out/