Circuit construction of psicA-RFP was carried out as described on our Experimental Design page. Below are results of diagnostic experiments (agarose gels) to confirm the size of our inserts and plasmid.

Figure 2. PCR amplification of the mRFP1 reporter gene containing BBa_J04450 plasmid was successful. In lane 1, the NEB 1 kb plus DNA ladder is observed. Lanes 2 and 3 contain the amplified BBa_J04450 plasmid backbone. Lane 3 is a replicate amplification. As labelled in the figure, the DNA ladder confirms the 2969bp size of the plasmid backbone. This confirms the presence of the backbone in preparation for the Golden Gate assembly reaction with the amplified psicA gblock.

Circuit construction of pLactate-RFP was carried out as described on our Experimental Design page. Below are results of diagnostic experiments (agarose gels) to confirm the size of our inserts and plasmid.

Figure 4. The uncut lane was an uncut control (uncut plasmid), displaying what the samples would look like if the digestion failed. Lane 3(1) was our construct plasmid cut with 1 enzyme. It hovers around the 4.5 kb mark as expected. Lane 3(2) was our circuit construct cut with 2 predetermined enzymes. As you can see, even though one of the plasmids didn’t completely cut the plasmid, the second band hovering above the 2kb mark indicates that when both enzymes are actively cutting the plasmid, it gives us DNA fragments of around ½ the size of the original construct. This also helps validate that the size of the construct is correct.

Figure 5. Above are the results of our Sanger sequencing. All of our primers worked, and the sequences aligned to our designed construct, fully confirming that we have what we set out to assemble.

Induction experiments with differing concentrations of lactate were carried out on our constructed pLactate following circuit construction as described in Experimental Design. The results of this characterization experiment are described below. 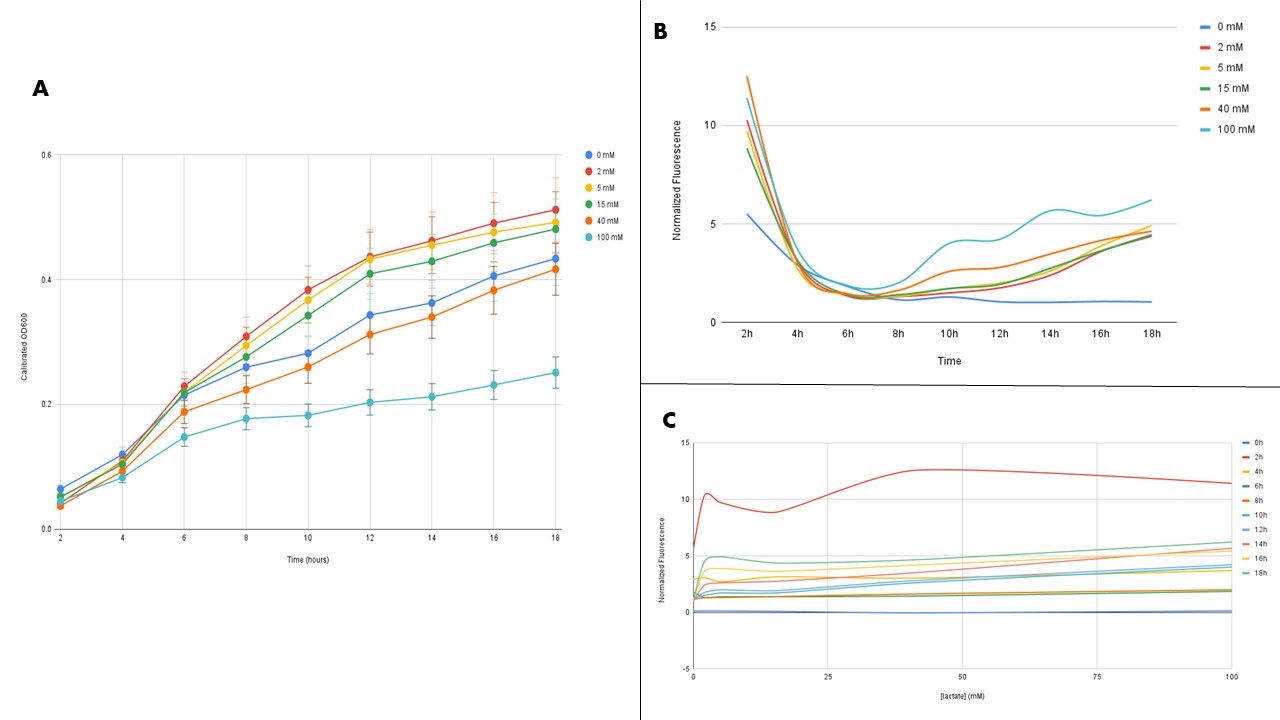 Figure 6A. Data from our lactate induction experiment with our lactate-inducible reporter construct, with the OD600 (cell density) plotted over time. We discarded the 0h timepoint data due to technical artifacts caused by bubbles in the plate reader wells leading to a spike in the OD600 measurements. Looking at the 2h time point (second read), the bubbles have disappeared, removing the obstruction towards measuring the OD600 of the cells. Cell growth in media with a lactate concentration of 100 mM is noticeably lower than the rest of the concentrations. This matches the literatures’ reports of lactate poisoning at higher concentrations in E. coli.

Figure 6B and 6C. Data from our lactate induction experiment with our lactate-inducible reporter construct, with the lactate concentrations plotted against normalized fluorescence. As expected, 0h has the lowest fluorescence, especially since the cells haven’t had time to acclimate to the presence of lactate in the media. Overall, there is a pattern of increased fluorescence with an increase of lactate concentration, with a particularly steep increase in the concentrations between 0 and 25 mM seen in plot C. Unsurprisingly, the steep increase at the lower concentrations match the kinetics of a similar lactate operon found in E. coli which mirrors a Hill function. The fluctuations between hours may be due to technical artifacts and the large 2 hour time span between each read, especially at hour 2. However, as seen in plot B, there is still an overarching increase of fluorescence over time with most of the times later in the experiments expressing higher amounts of fluorescence.

Measurement was taken every ten minutes over a course of 13 hours. 11 different lactate concentrations were tested, as indicated by the colour coding. Relative fluorescence was calculated by normalizing against OD600 and the highest fluorescence detected in the entire experiment. At the initial six hours, fluorescence level was relatively stable, indicating a lag phase. Afterwards, in media with 40mM and 100mM lactate, fluorescence increased as time went on, whereas it stabilized or decreased in other lactate concentrations.