According to the current statistics, China has a population of over 1.4 billion[1]. Among the huge population, people are provided with education in different levels. For instance, citizens who live in the developed city such as Beijing and Shanghai may accept high quality education, while the education supplied in the poverty like Guangxi district may be barren. In addition, there are more than 80 million people struggling with the disabilities in our country. Besides the disabled groups and the discrepancy of the regional education, there are still many special groups with particular significance in China. Therefore, a successful spreading mainly depends on enlarging the scale of audiences from different groups.

In order to spread the tips of synthetic biology to a wide range of citizens, we organized a series of activities contraposing the elder, the disabled and even those who are difficult to access high quality education. Specific activities are as follows.

It is estimated that there are as many as 70 distinct national languages and dialects in China[2]. Diverse languages implicate countless ethnic and regional characteristics that are culturally invaluable. Not only people from different provinces speak their own language, sometimes even people from adjacent villages speak with such distinct accents that they can’t understand each other.

The barriers brought by languages

However, for the people who are not capable of understanding the official language in China, Mandarin, distinct languages become an obstacle for spreading scientific knowledge. What’s more, the number of people who can’t understand mandarin is far above our estimation. According to a survey conducted by Chinese Ministry of Education in 2014, there are still about 400 million people in China who cannot communicate in Mandarin[3]. Most of them are from remote areas with undeveloped scientific education.

According to the latest statistics, the hearing disability ranks first among the five major disabilities, with approximately 20.57 million people, accounting for 1.67% of China's population. We specifically designed the way of promoting scientific knowledge for the hearing impaired group.

The barriers brought by hearing impairments

Sound has greatly affected our life experience and quality of life. For example, compared with the boring words, the vivid explanations such as sound to body language are better ways to spread knowledge. But hearing impaired group can neither hear any sound nor learn the language of pronunciation, which leads to a giant obstacle to communication.

In order to communicate with this special group and bring synthetic biology into their life, we filmed a sign language promotion video and put it on the WeChat Official Account. We knew that the promotion through the Internet is far from enough, so we actively contacted with relevant welfare homes and displayed our publicity videos during community activities. Moreover, we also conducted many voluntary services with the welfare communities to understand and help them efficiently.

The disabled have the identical rights to get to know the innovated technologies, so we tried our best to provide chances for them to learn about the synthetic biology. Our sign language promotion video smashed the wall between the world and the disabled, which may help them receive the knowledge easily and accessibly.

The unfair education resource distribution is always a hot issue in China. In 2019, the amount of the primary schools in the urban areas increased by 650, while the rural's decreased by 2313. During the pandemic, students in Tibet had to study on the top of mountains because of the weak Internet signal. Thus, economy and different kinds of elements finally lead to the unfair distribution in the field of education.

The barriers brought by the unfair education resource distribution

The quality of the education that students can accept is determined by a series of reasons.

Students in different cities receive different depths of knowledge by using diverse facilities. The poor areas are lack of high-quality teachers and instruments. Overall, we eager to give a hand to spread the synthetic biology to the places where the education is barren.

In this summer vacation, we contacted voluntary teaching teams to negotiate how to spread the synthetic biology. Beyond our expectations, we got in touch with 25 voluntary teaching teams from BNU, scattering in 13 provinces in China. We provided a series of publicity materials such as science popularization brochures, postcards and a vivid animation explaining the basic knowledge of synthetic biology on biology. 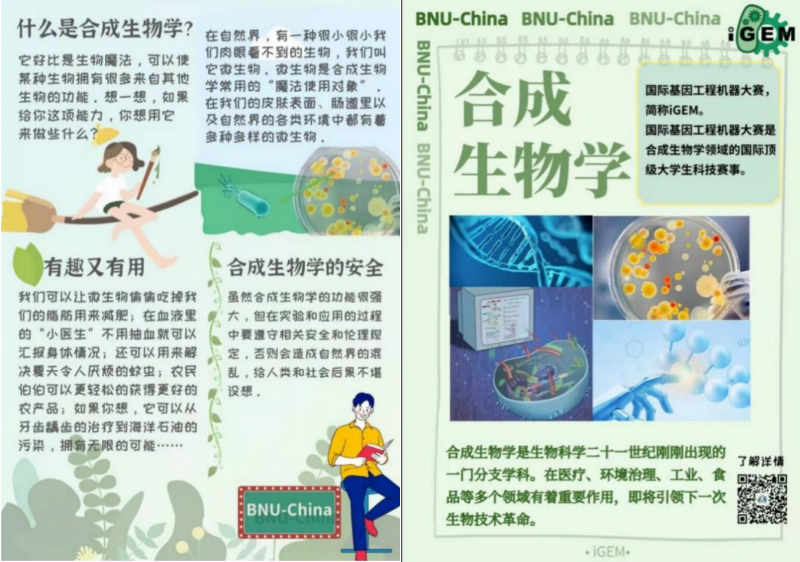 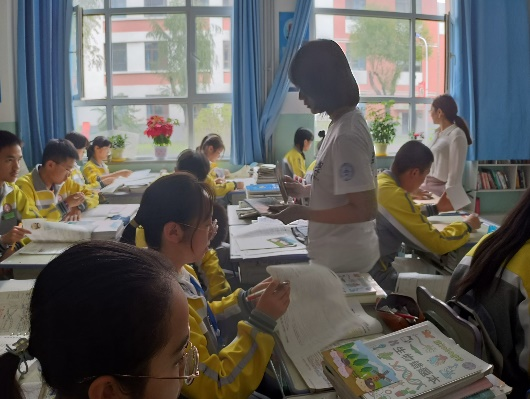 The nowadays condition of people with visual impairments

According to the‘World Health Organization’, there are almost 40 million to 45 million blind people in the world and there are more than 17.3 million people with visual impairments in China [4].It implies that both world and China should pay enough attention to the blind. Nowadays, BNU-China looks forward to bringing synthetic biology to the blind by Braille.

The barriers brought by the visual impairments

Healthy people can feel the fun of science through colorful videos, pictures and words. However, people with visual impairments could never see that. Due to the particularity of this group, there are many obstacles to the popularization of science and education to them. The problem we want to figure out is how to break the barriers between the blind and synthetic biology by using appropriate materials and methods. 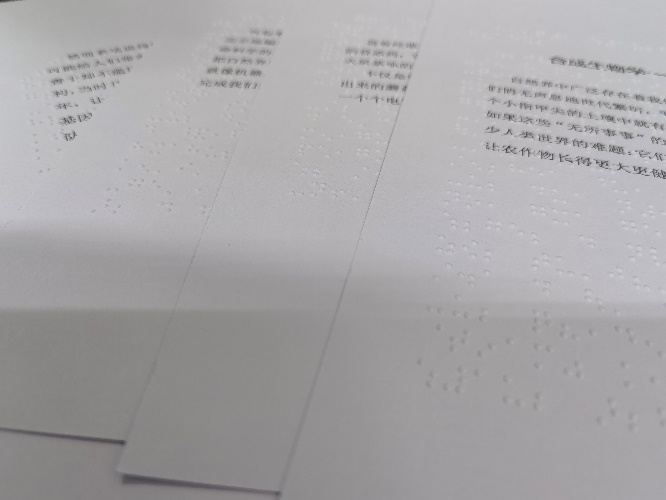 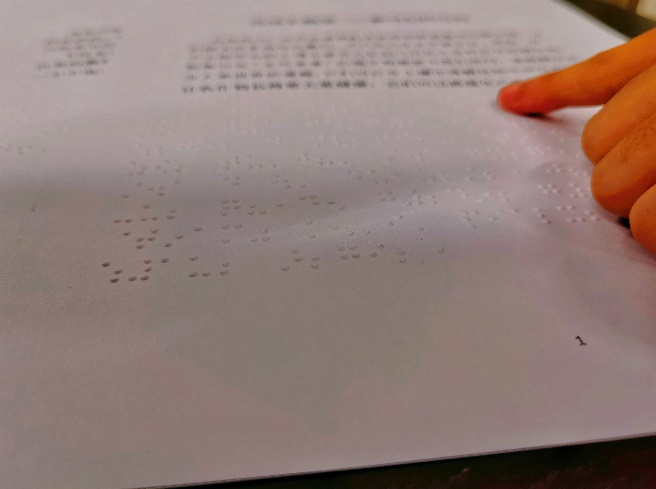 We are exploring better ways to carry out our project smoothly, meanwhile taking good care of the feelings of people in this special group. As spreaders of synthetic biology, it is our duty to enable people all over the world to access it. Everyone in the world is the same in front of knowledge no matter who they are.

The misunderstanding of synthetic biology and genetically modified food

The barriers brought by the misunderstanding

Having found the phenomenon, BNU-China looked forward to spreading more genetic knowledge to middle-aged and elderly people without learning biology to help them do their own choices after they know the theory of gene. We establish The Family Science Training Camp to spread the theory of genetically modified food and more things contact with gene.

The Family Science Training Camp is an external publicity project set up by BNU-China team in 2021 to promote genetic engineering and synthetic biology for middle-aged and elderly people without learning biology. Firstly, we spread knowledge to students. Students who are interested in genetic engineering and synthetic biology, and are willing to disseminate knowledge of this field to the public all are warmly welcomed. In order to ensure the quality of knowledge publicity, 2021 BNU-China provided a series of online training courses and corresponding materials concluding four sections for students participated, the safety of genetically modified crops, the gene therapy, the ethical issues behind gene editing and brief introduction of the synthetic biology.

After taking a series of great training courses in the camp, students then went back home to teach their elder family members about the basic knowledge of genetic engineering and synthetic biology, in the hope of granting public a more scientific and accurate comprehension on this particular topic.

In the end, a total of 135 families from more than 21 provinces in China participated in our program. 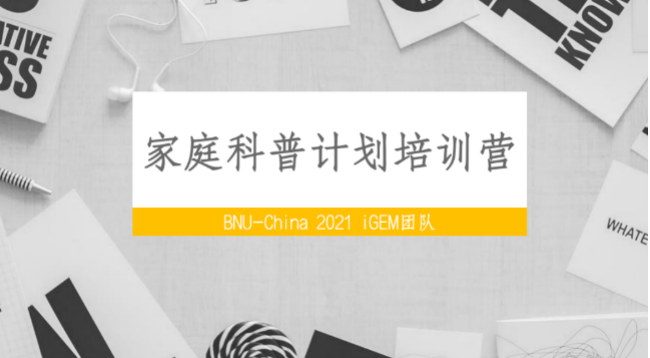 Figure6 Set up of the family science camp 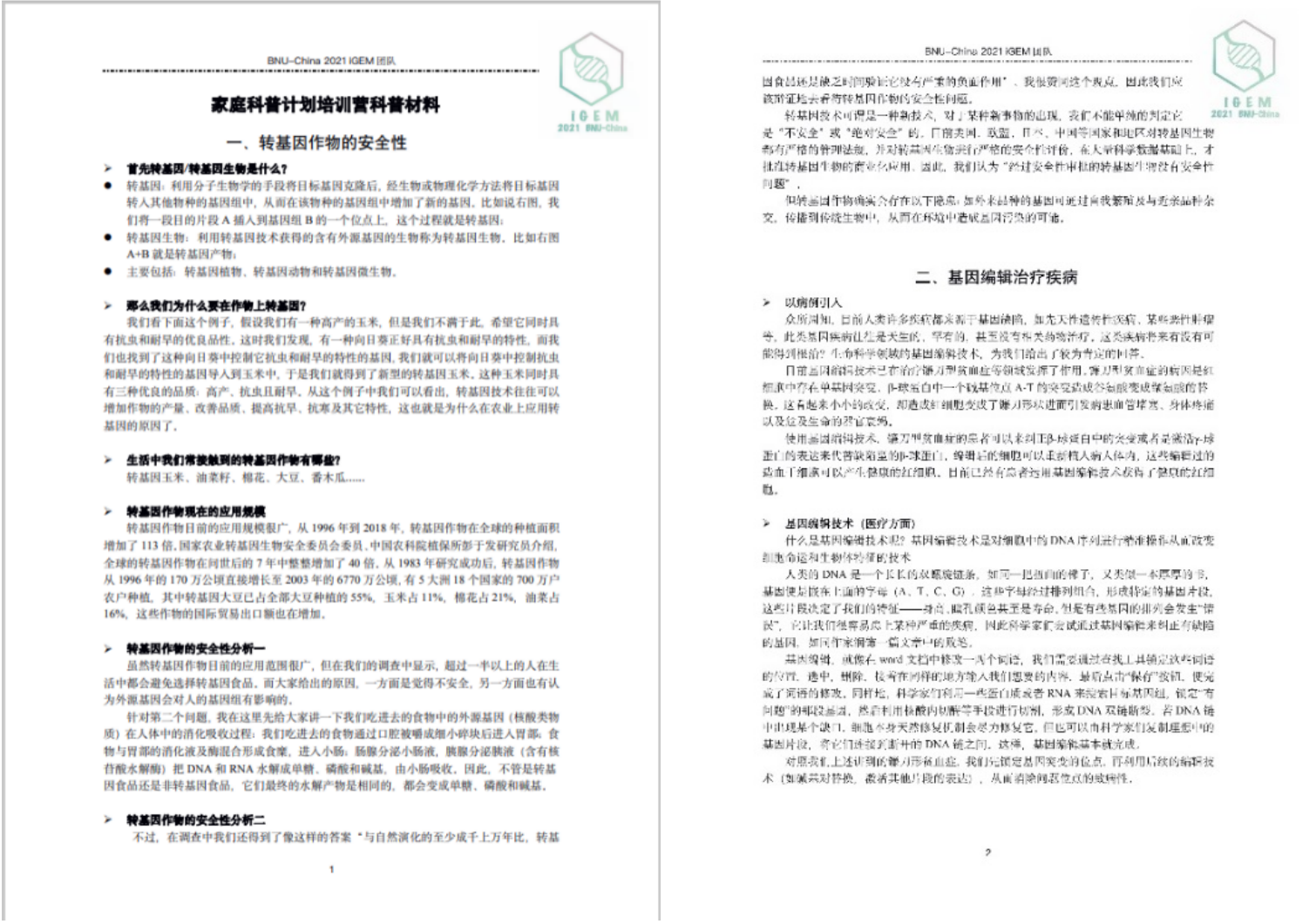 Figure7 Preparation of the contentsk

By using the power of the younger generation to implement the science popularization to the elder generation, we sincerely hope that we can involve more people in synthetic biology. We are dedicated to give people the right insights into the products and applications of genetic engineering, and strengthen the publicity of synthetic biology in a new, more comfortable, friendly and acceptable way. Therefore, we contribute our humble strength in the field of synthetic biology!