Welcome to the engineering success page! Here, we described how we developed and tested the pmrB-anti-mCherry receptor and mRNA switch . During this process of engineering, some of the experiments we planned did not work at the first attempt. Nevertheless, the drawbacks forced us to come up with new ideas and initiated new cycles of engineering, ultimately driving our project forward. On this page we summarized the underlying line of thinking that led to our final engineering success.

We wanted to design a cheater-proof platform that consists of mutation-reporting workers and specifically-cytotoxic guards to improve the genetic stability. Once the workers transform into cheaters that don’t produce aimed protein, the mutation will be presented and then detected by guards, whose extermination system will therefore be activated and will secrete cytotoxin to selectively target cheaters. One of the most important steps is to recognize the killing signal from guards.

There is a pmrBAC system in bacteria, which can be used as a bridge between extracellular signal and intracellular gene expression regulation. Originally, PmrB receptor on cell membrane uses an iron(III)-binding motif to sense the environmental ferric level[1].Based on the system, we wanted to replace the iron(III)-binding motif with an anti-mCherry motif, which can specifically bind mCherry protein and then facilitate PmrB to phosphorylate PmrA. The PmrC promoter will be activated by phosphorylated PmrA protein. Then it will initiate the expression of CcdB cytotoxin. In a word, mCherry acts as a killing signal to trigger the cheaters' death. 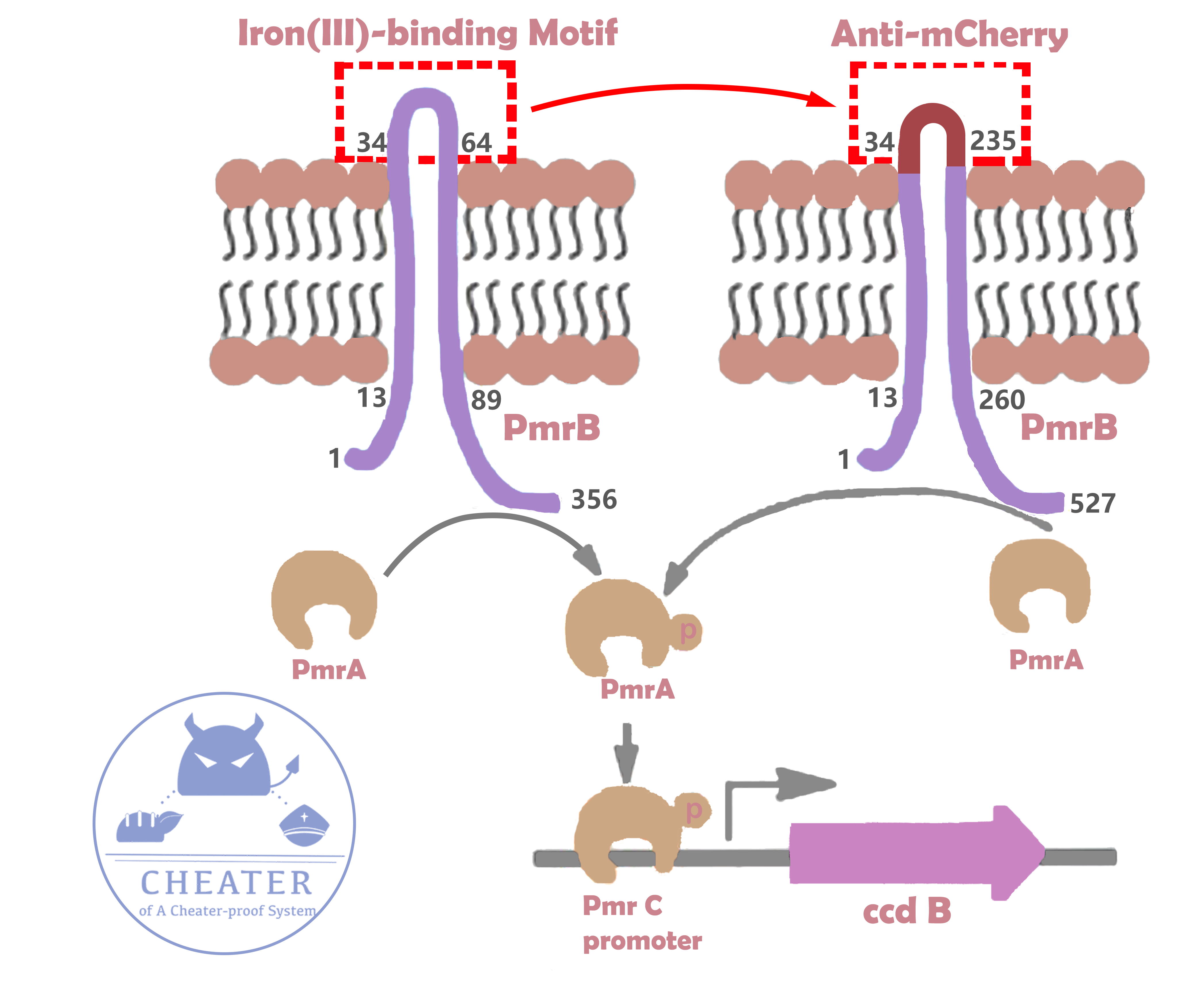 In order to achieve verification, we constructed two plasmids, one was the original design with ccdB(plasmid-B), and the other was using GFP instead of ccdB(plasmid-G) so that we could observe the expression visually. All the fragments were connected to pET-Duet-1 plasmid by enzyme digestion and ligation and transformed into E. coli DH5α.

The failure of the experiment led us to rethink our design. We suspected that the length of anti-mCherry sequence was so long that the extracellular polypeptide chain of the modified PmrB failed to form the correct structure, which led to the failure of the verification experiment. We checked the material of previous successful transformations and found that the length of their modified sequence was indeed much shorter than our modified sequence. That's why we finally decided to shorten the length of anti-mCherry sequence as much as possible while retaining its original functions. 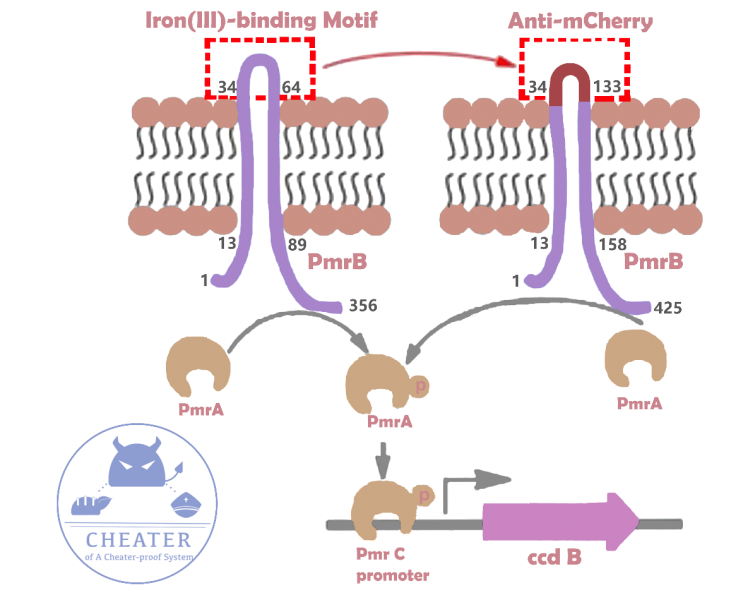 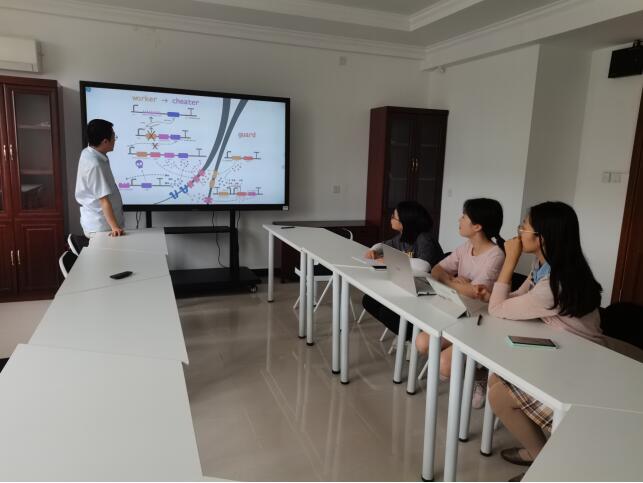 Figure 3 Our communication with professor Li

Same as before, we conducted two confirmatory experiments after we constructed two plasmids and validated plasmids.

Apparently, the higher the concentration of mCherry was, the stronger the fluorescence intensity was, which confirmed that the pathways we constructed properly performed the functions we expected(Figure 6). 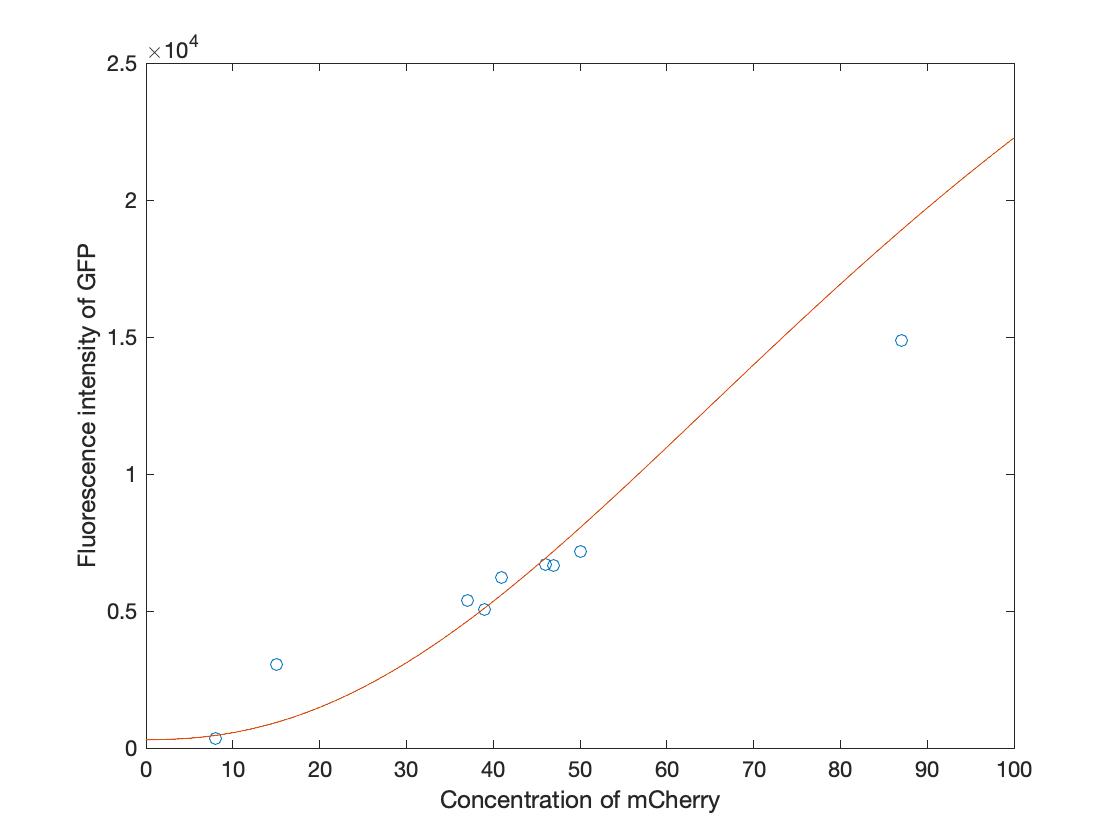 Besides, we proved that the cheaters could accept the mCherry signal to commit suicide(Figure 7). Through comparison, our results confirmed that the killing efficiency of extermination pathway reached more than 90%.

mRNA switch is a new part proposed by BNU-China. We designed a pathway with a certain sequence behind its promotor to act as an additional switch to adjust the expression of downstream GFP gene, which represents the extermination system in our project. This unique 12bp mRNA sites in Pathway 2 are complementary with continuous 12bp insulin proteinogen mRNA.[3][4]

At the beginning, in order to test our Pathway 1+Pathway 2 and the expression of insulin proteinogen, we designed a series of bacteria internal（in vivo） experiments to verify the combination of certain 12bp sites normal or changed in insulin proteinogen with complementary sequences in Pathway 2. According to our assumption, it should not be fluorescent when the targeted protein is expressed normally because the specific 12bp sites in insulin proteinogen mRNA will bind to the complementary sequences in Pathway 2. However, if the targeted protein was incorrectly expressed (as in Mutation Ⅰ and Mutation Ⅱ), the cell should show fluorescent. But unfortunately, our results show that all cells could be fluorescence, which didn’t meet our expectations.

Figure 9 GFP expression (from the left to the right: normal, mutationⅠ, mutationⅡ)

We have analyzed the results, discussed the design of experiments, searched for information and asked experts for help. After these, we proposed two possible causes for the unexpected results. (1)The 12bp mRNA binding site is not enough for mRNAs’ interaction. (2)The efficancy of the switch is poorly guaranteed. So, we continued to design a series of experiments to test for our proposed ideas. 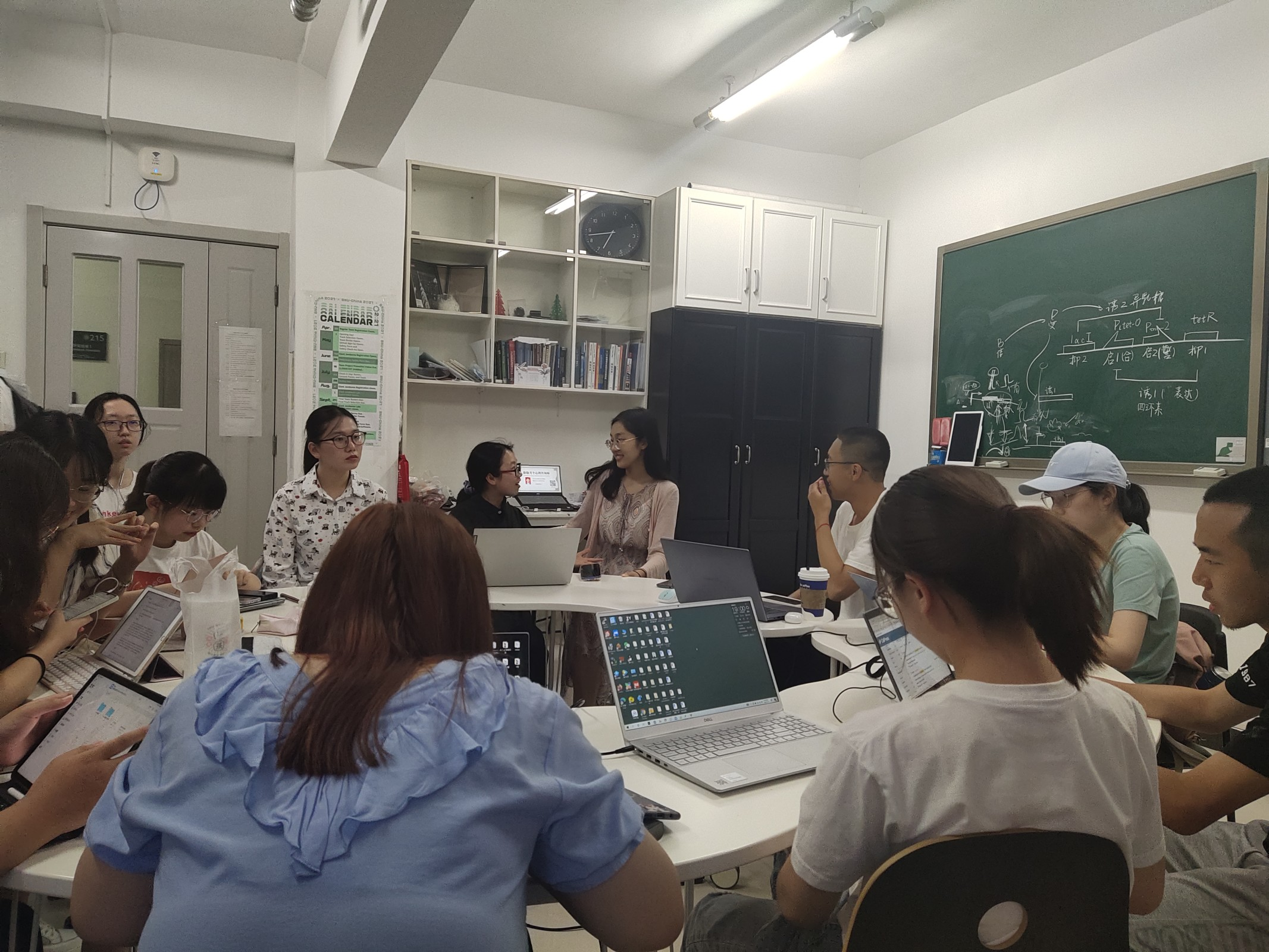 Then, we designed an in vivo experiment to test whether mRNAs can serve as a switch to control the expression of downstream genes. In our experiment, we set three different concentrations for 12bp mRNA in bacterial culture, hoping that the bacteria could internalize the mRNA and indirectly reflect mRNA binding through the expression of GFP. Interestingly, the results showed that the fluorescence intensity of the bacteria with two pathways became lower and lower with the prolongation of incubation time, indicating that the bacteria could absorb short mRNA under normal conditions, and the interaction of mRNA could inhibit the expression level of GFP. 12 bp mRNA can be absorbed by generations of bacterial cells after cell divisions, which causes the ratio of the green fluorescent /cell density (indicated by OD600) to decline continuously over a period of time. 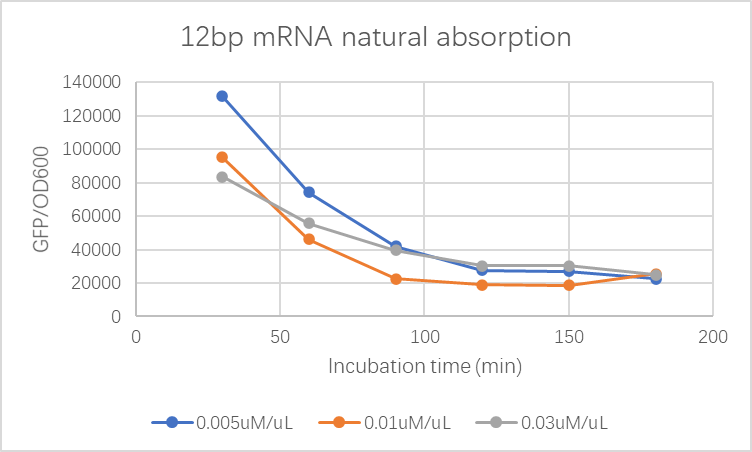 However, our team members suggested that the reduced GFP expression in the in vivo experiment might also be due to absorption efficiency caused by strain propagation. After discussion, most of us think that this may exist.

In addition to the in vivo experiment, we also designed a series of mRNA transformation experiments, which is a method that can directly allow mRNA to enter cells, and can record the GFP expression of a specific generation under the constraint of mRNA binding. We used a uniformed 12bp mRNA concentration gradient and the results showed that our mRNA switch is feasible.[5][6] 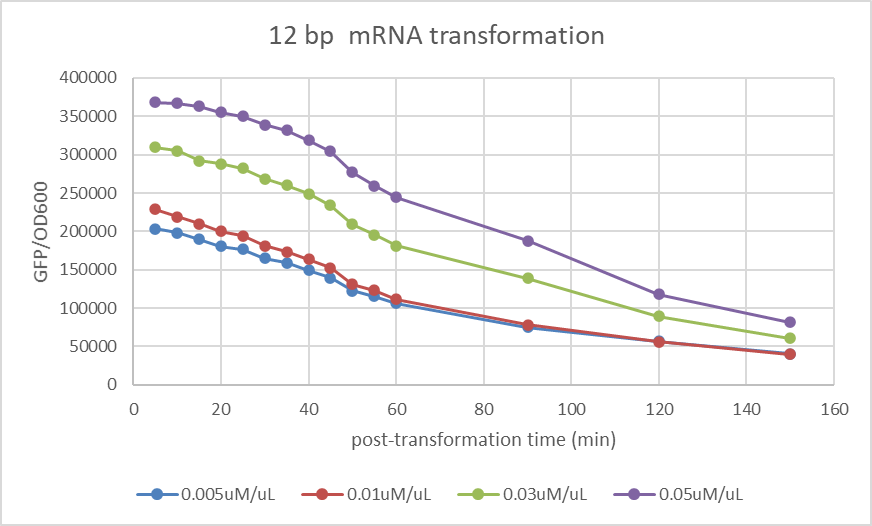 After demonstrating the feasibility of our switch, we tried to further explore an optimized binding site length. We added a group of 24bp mRNA experiments to compare with the one in the previous experiments. The results showed that gene length, gene concentration and the time after administration and transformation may all have impact on the expression of downstream genes. 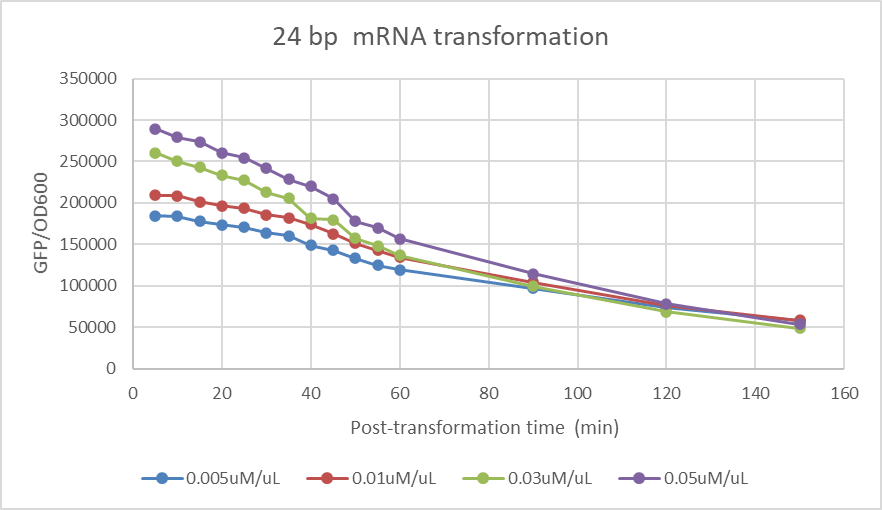 Overall, we have successfully verified the feasibility of our mRNA switch and found several factors that can be adjusted to improve the efficiency of our switch.