This year, BNU-China applied Agr quorum sensing system from Staphylococcus aureus to realize interactions between two types of bacteria. We have looked up a series of literature for detailed information of the structures and functions of AIP molecules, which we sorted out and listed below for future iGEM teams to consult.
The autoinducing peptides(AIPs) has 4 types with different structures. AIP of one kind specifically activates corresponding AgrC receptor and meanwhile inhibits other types of AgrC receptors. The binding of AIP activates P2 and P3 promoters to regulate Staphylococcus aureus metabolism.

AgrD is transformed into mature autoinducing peptide(AIP) through the process of two protease cleavage and a thiolactone formation[1]. So far, four types of AIP have been found within Staphylococcus aureus (AIP I-IV) in different species[2]. AIPs have complicated relationship with different types of AgrC receptors. AIP of one kind specifically activates corresponding AgrC receptor and meanwhile inhibits other types of AgrC receptors[3].


Based on the sequence of the major amino acids of AIP, the Agr system of Staphylococcus aureus can be divided into four species, and Lyon et al. [2] found that AIP-I and AIP-IV differ in only one amino acid, and the aspartic acid at position 5 on AIP-I is a tyrosine in AIP-IV. However, unlike AIP-I, which strongly activates AgrC-I but largely fails to activate AgrC-IV, the AIP-IV strongly activates both AgrC-I and AgrC-IV. (Figure 1) 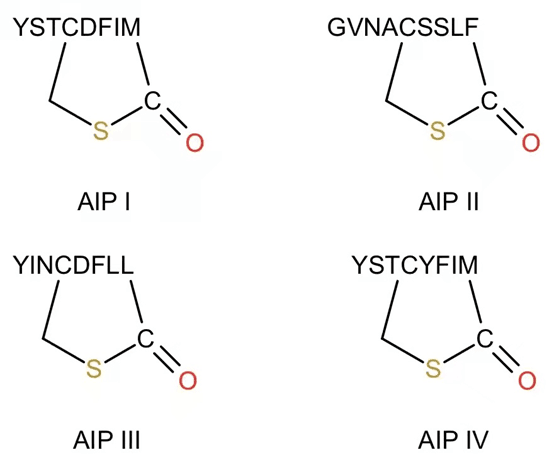 Figure 1 The structure of AIPs

AIP is a short peptide derived from AgrD, which is processed by AgrB to secrete AIP into the extracellular environment. The extracellular AIPs bind to transmembrane proteins AgrC, causing autophosphorylation of AgrC, which then transfers the phosphate to AgrA [1,2]. Phosphorylated AgrA activates the activity of P2 and P3 promoters[3,4], upregulating the expression of agrABCD and RNA III [3,4]. Figure 2 shows a schematic diagram of the entire system. 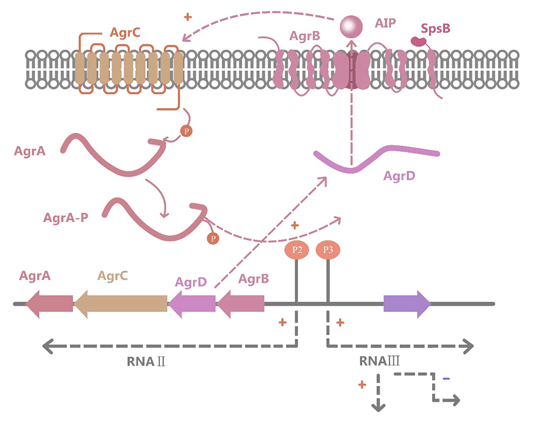