This project aims to produce γ-linolenic acid from gutter oil using the Y. lipolytica with specific genes. By introducing this technology, factories are able to convert the large amount of daily waste into high economically-valued nutrients. We may collaborate with gutter oil recovery factories and health products manufacturers as well as government that has to face the food safety issues. 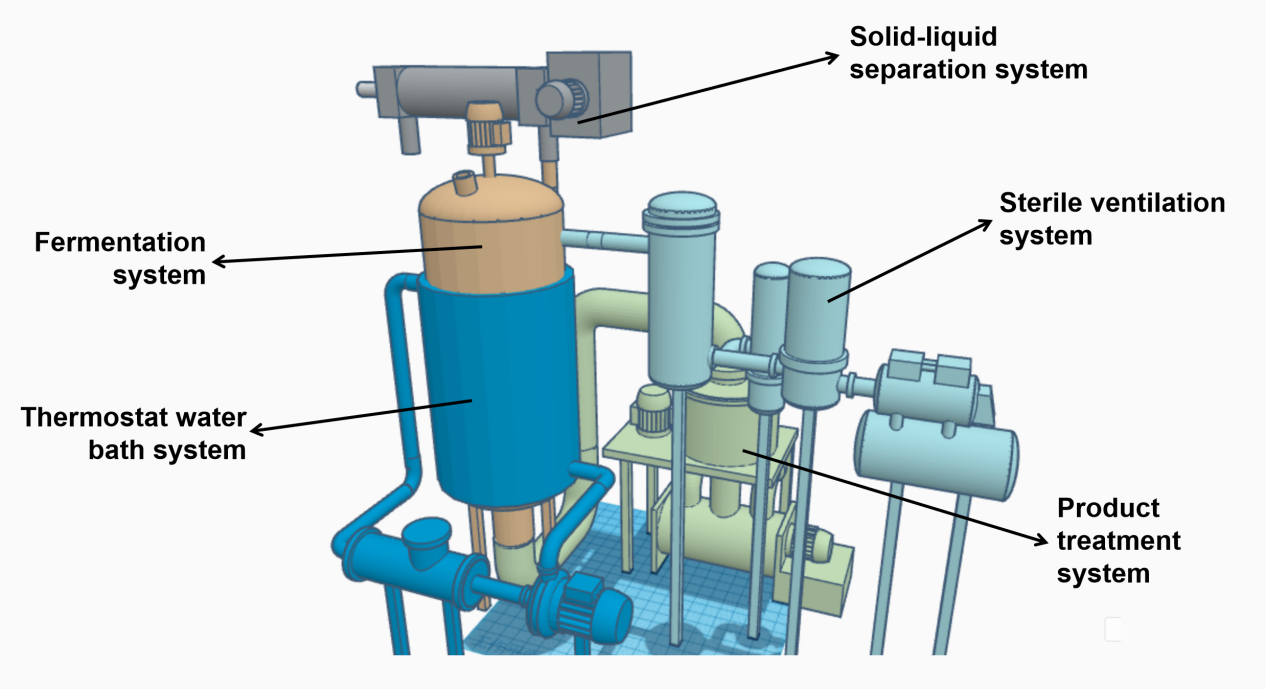 As we interviewed the gutter oil recovery factory, we realized that the gutter oil they collected are mainly preliminarily treated, so there is a need for treatment before fermentation.The Solid-liquid separation system is mainly responsible for treating the grease containing a small amount of solid impurities that is purchased from the gutter oil recovery manufacturer. We adopted the long strip structure with screw conveyor as the main part, and equipped it with a differential mechanism a and motor, so as to save power while separating efficiently. 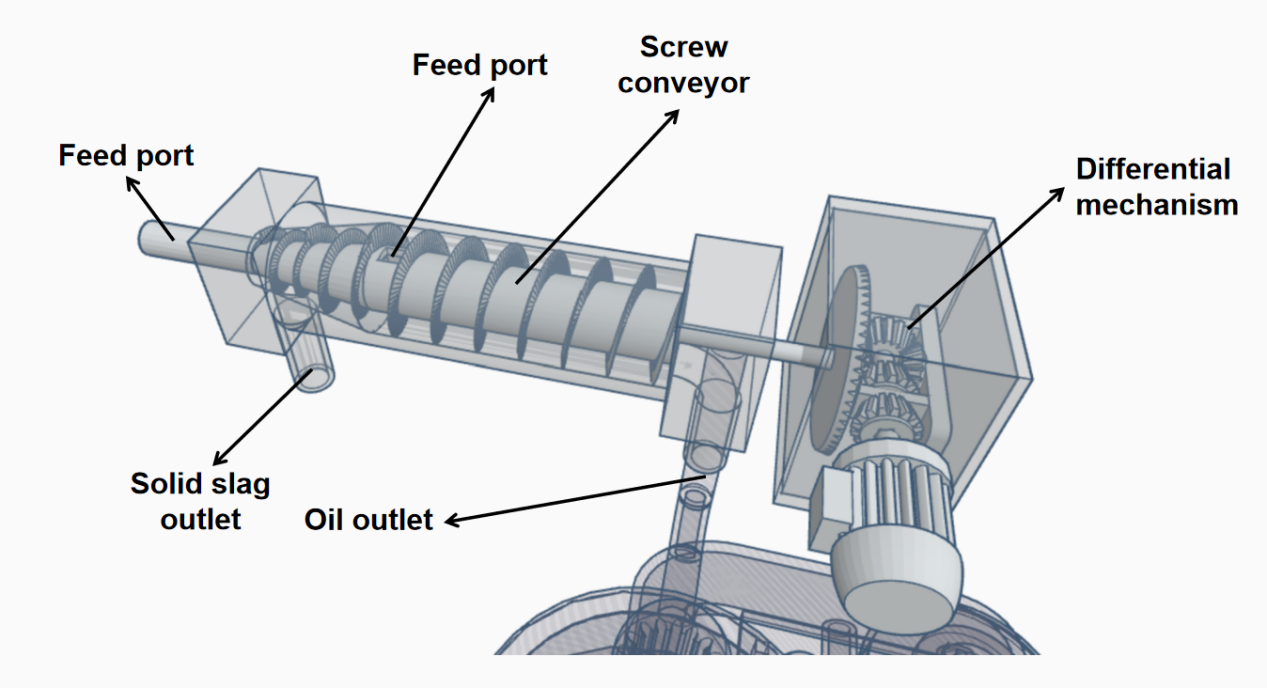 The collected gutter oil enters from the feed port and is transmitted to the opening at the front end through the middle of the conveyor. With the continuous operation of the equipment, the solid waste slag is pushed to the front of the machine and released from the solid slag outlet; The liquid waste oil is transported from the oil outlet at the rear of the machine to the fermentation tank for subsequent reactions. 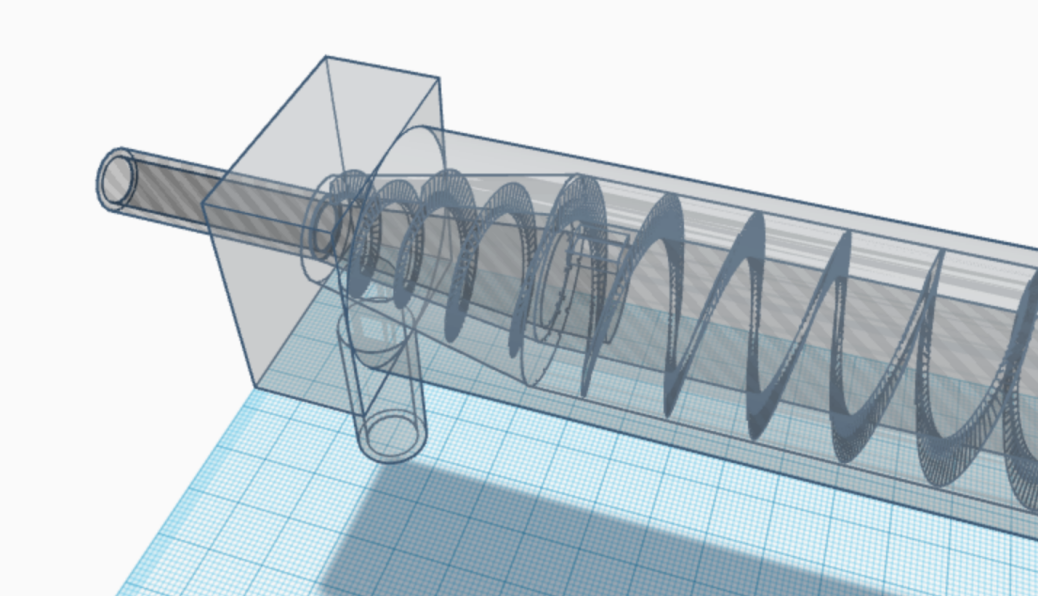 Fig.3 The structure of screw conveyor

The fermentation system is made up of a fermentation tank, a mixing system, a detecting system (not showing), a gas distributor, and a water bath heater. 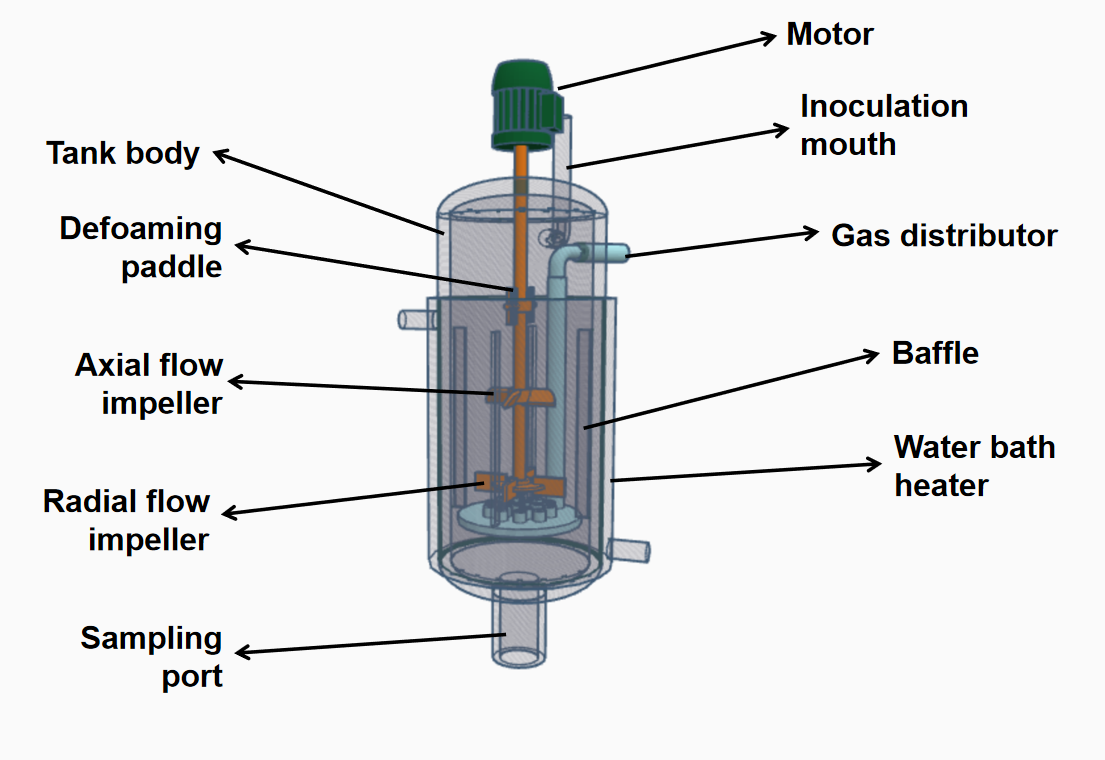 The fermentation tank is composed of the tank body, an inoculation mouth, a sampling port, a feeding port (not showing), and four baffles. Processed gutter oil, our raw materials, comes in from the inoculation mouth; after being absorbed by yeasts as nutrient and converted into linolenic acid, it is released from the sampling port. The four baffles are connected with the tank body to prevent vortex flow in the center of liquid level and enhance turbulence and dissolved oxygen mass transfer. The feeding port is used to add yeast that is scale-up cultured in the workshop and other reagents including defoaming agents and acid/base reagents. 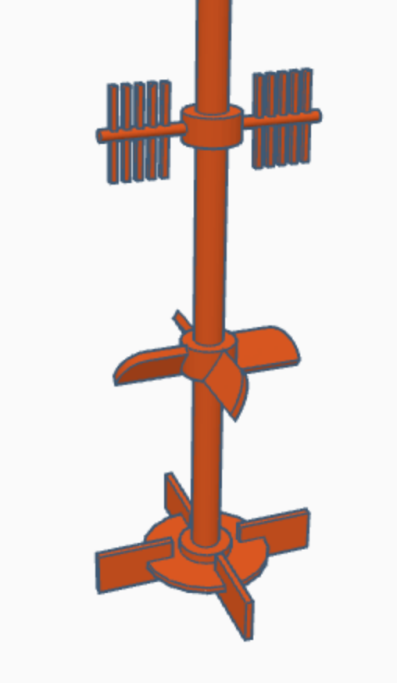 As what HUST-China has suggested, the mixing system is composed of a motor and three types of agitators: defoaming paddle, axial flow impeller, and radial flow impeller. The defoaming paddle is located at the liquid surface, and its grid-like shape allow its upper part to collide and stir up the bubbles on the liquid surface and the lower part to destroy the generated bubbles, thus controlling the increase of the foam. The two impellers move the liquid laterally and vertically respectively and so can make the liquid fully stirred in all directions.

The function of the gas distributor is to blow in sterile air and distribute the air evenly. The function of water bath heater is to maintain the temperature in the fermentor at the most suitable 30 ℃ for yeast. The detecting system is composed of a PH electrode, a dissolved oxygen electrode, a temperature electrode, and a central control center. The pH electrode detects and maintains the liquid pH value in the range of 5 to 6, and adds appropriate acid/base reagent when pH value is unstable. The dissolved oxygen electrode detects and maintains the dissolved oxygen in the solution at more than 30%, and changes the air flux in the gas distributor through the central control system in case of instability. The temperature electrode detects and maintains the temperature in the solution at 30 ℃.

The thermostat water bath system is made up of three parts: a water bath heater, a heater, and a water pump. 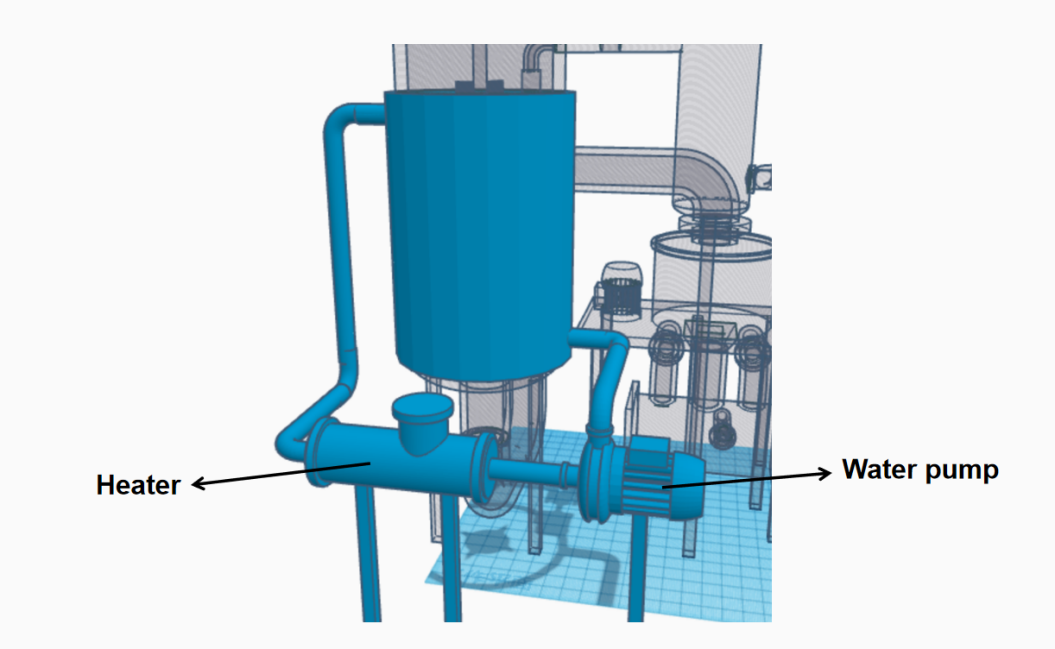 For the heater, we chose the steam water mixing heater. During operation, the heated water passes through the pull valve tube shaped nozzle, and the steam is sprayed into the water from the nozzle side through many inclined holes on the pipe wall. The two are well mixed instantaneously in high-speed flow to achieve the purpose of heating water. Compared with other heat exchange equipment, this heater has the characteristics of high heat exchange efficiency, low noise, simple installation, and low cost[1]. 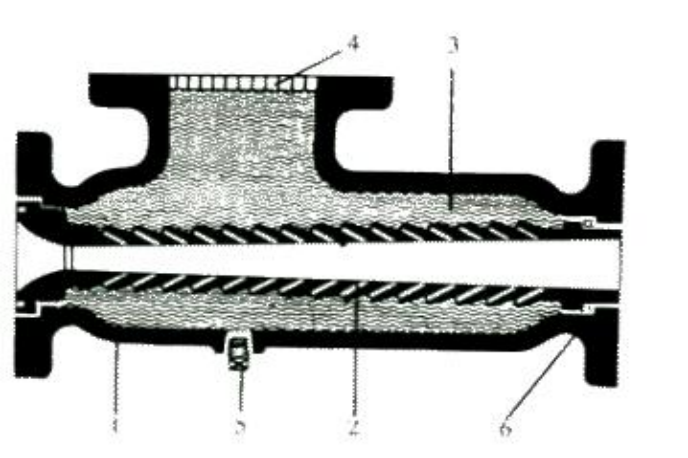 The sterile ventilation system is made up of three parts: a gas distributor, an air compressor, and a sterilization system. 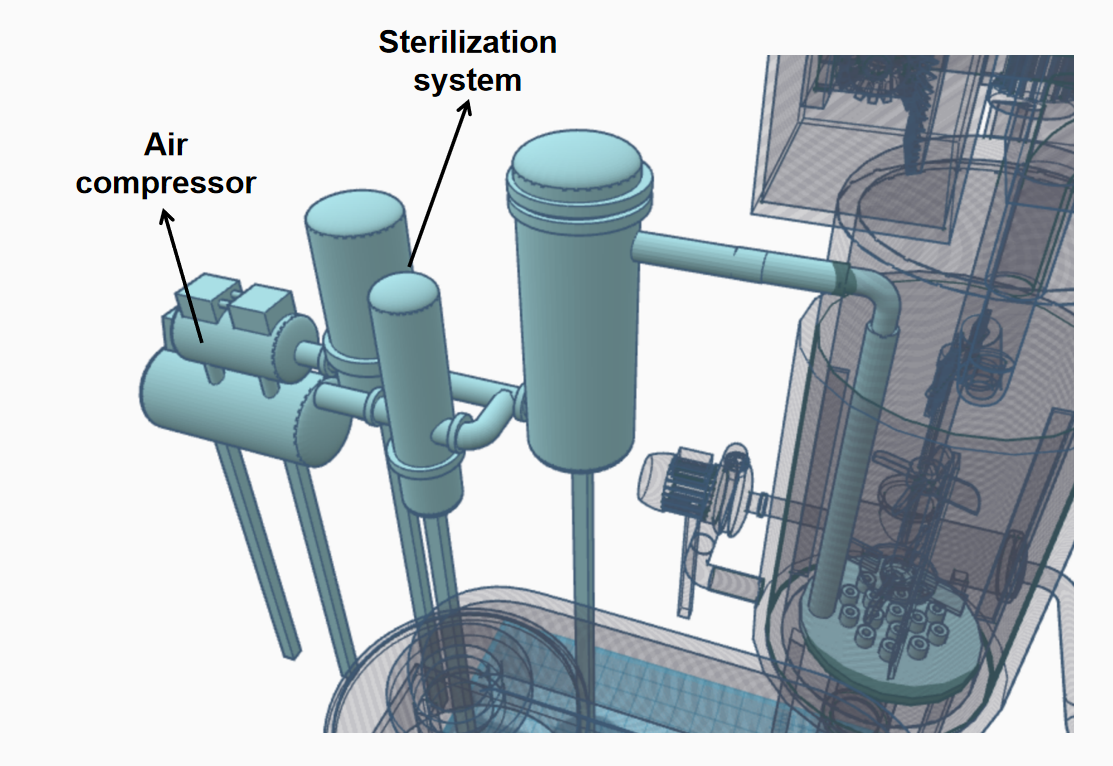 We chose the air filtration and sterilization process of direct mixing of cold and hot air. After the compressed air comes out of the storage tank, it is divided into two parts. One part enters the cooler and is cooled to a lower temperature. After the water mist and oil mist are separated by the separator, it is mixed with another part of untreated high-temperature compressed air, At this time, the temperature of the mixed air is 30-35 ℃ and the relative humidity is 50% - 60%. It then enters the air filter for filtration. This method can eliminate the separation equipment and air heating equipment after the second stage cooling, and has simpler process and costs less cooling water consumption.

The product treatment system is made up of a discharge centrifuge and a ploughshare mixer. 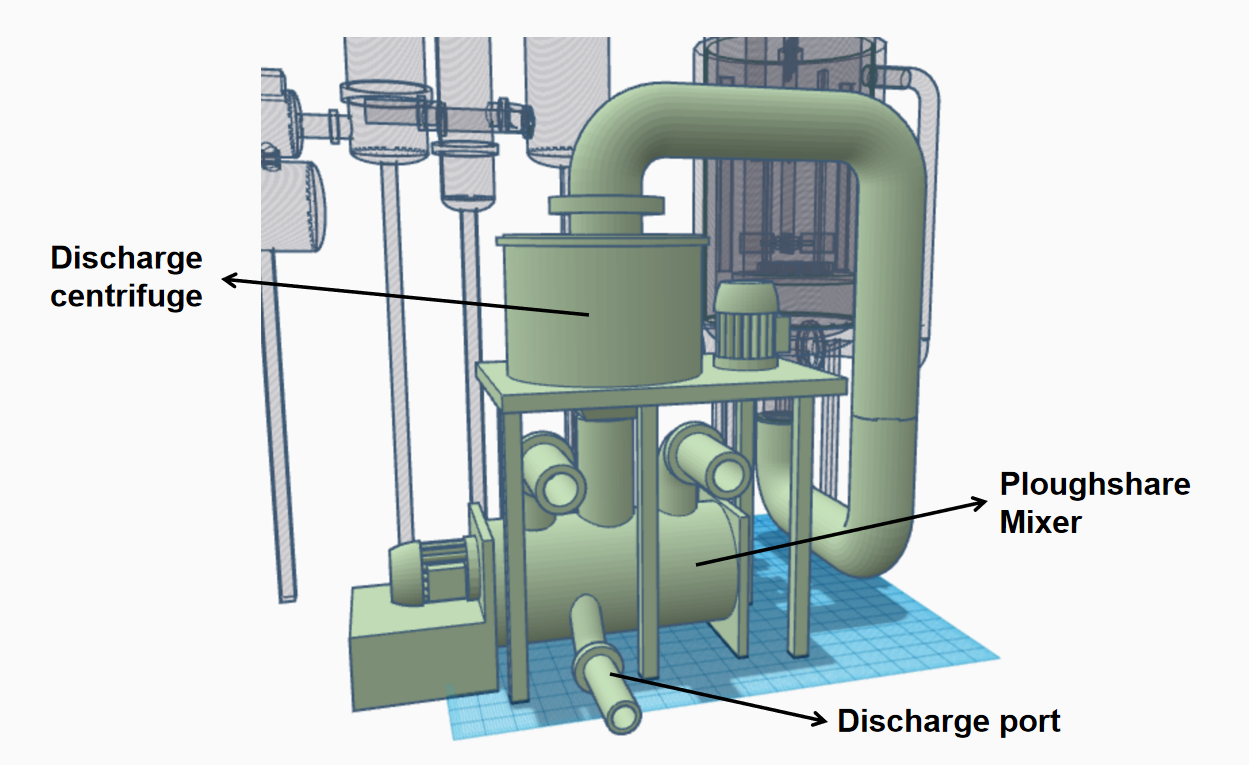 After the fermentation, all the liquid in the fermentation tank is transported to the discharge centrifuge. The waste liquid is discharged after centrifugation, while the solid components are discharged into the plow mixer by using the scraper in the centrifuge. Then, 0.5N sodium-methanol solution and the internal standard (mixture of methyl-C13 and glyceryl-C17), 98% sulfuric acid, and fatty acid methyl esters are added successively through the feed inlet of the mixer, while the mixer maintains in operation. The fully mixed liquid is discharged through the discharge port for subsequent centrifugation and purification. 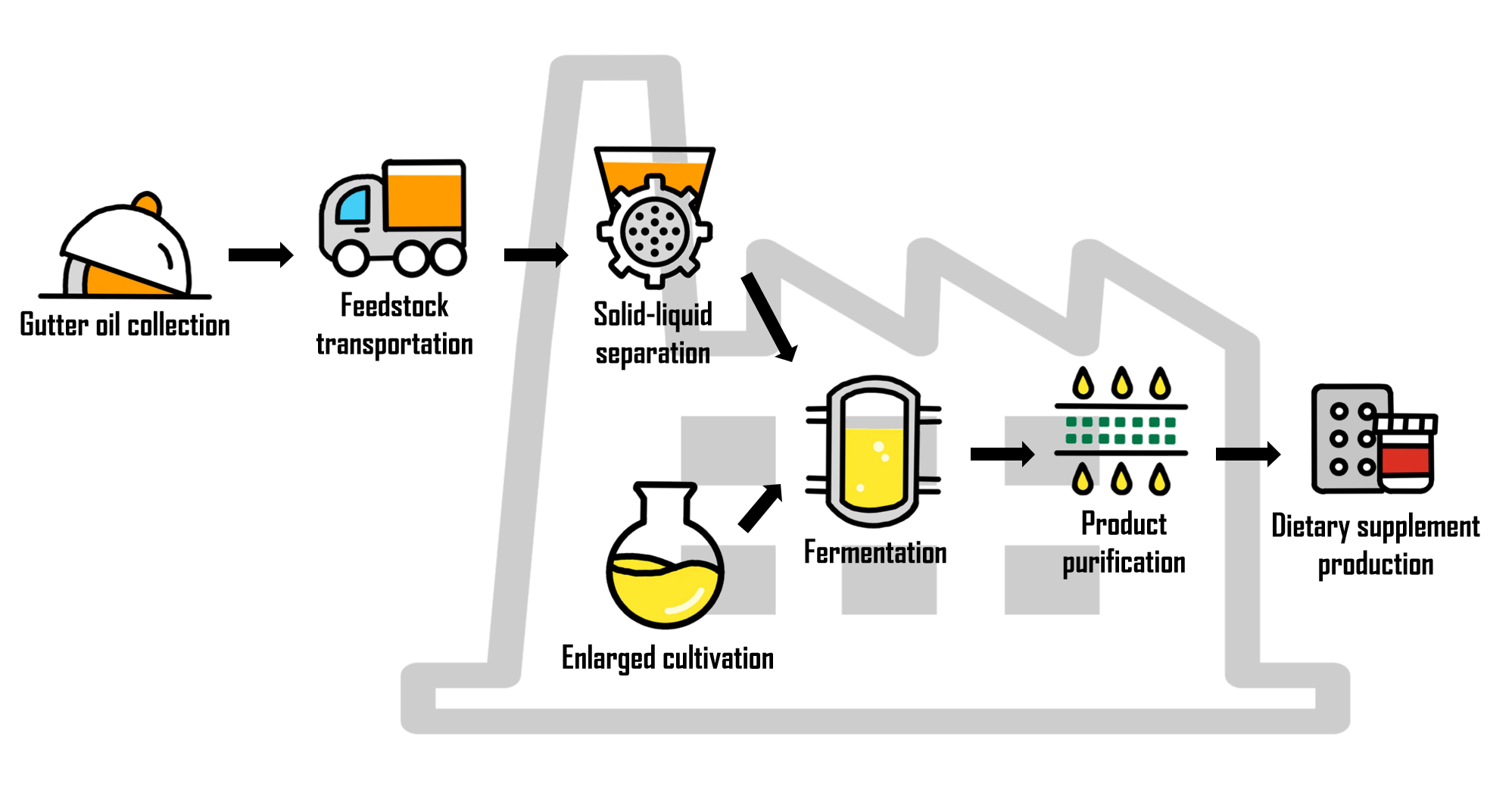 1. Raw material collection. According to the results of human practice, we can cooperate with gutter oil recovery factories to collect the gutter oil after simple treatments (removal of large solid waste residue).

3. Fermentation. The gutter oil is transported into the fermentation tank for a five-day closed fermentation. The yeasts we cultivated serve gutter oil as nutrient and produce linolenic acid in the cells. During the process, the detecting system, the thermostat water bath system, and the sterile ventilation system are in operation all the time.

4. Linolenic acid extraction. The fermented liquid is transferred into the product treatment system. Linolenic acid was extracted from yeast by reagent after wall breaking and other operations.

The 3D model of our project can be divided into five parts: the solid-liquid separation system, the fermentation system, the thermostat water bath system, the sterile ventilation system, and the product treatment system. Each plays its own vital role in the whole process of using gutter oil to produce linolenic acid. Served as a chemical good for human’s physical health, linolenic acid can be added into health products and daily chemical products. We hope that with this implementation, we can better cooperate with factories for subsequent industrial production and further help to put forward an environmentally friendly solution to food safety issues.

Here, we would like to express our sincere thanks to all those who have helped us in this project. Thank to Yang Gu and Dongsheng Guo of the school of food science and pharmaceutical engineering of Nanjing Normal University for their dedicated answers when we asked questions about theoretical problems, and thank to the members of Team HUST-China's hardware installation team for giving us suggestions and background information without reservation.