As food safety crisis aggravates progressively, finding an efficient and environmentally friendly solution to the gutter oil issue is in urgent need. In this project, our team aims to use gutter oil as our directed modified yeast's sole carbon source to produce γ-linolenic acid. By this well-designed method, waste oil treatment manufacturers can better convert their raw materials into nutrients with high economic and physiological benefits.

The suitable host we chose is Yarrowia lipolytica ( Y. lipolytica ) a species of non-pathogenic generally regarded as safe (GRAS) yeast identified by American Food and Drug Administration (FDA) and European Food Safety Agency (EFSA). Because it can grow in hydrophobic environment and has the ability to produce high titer of lipids, it has attracted much attention and is emerging as an important unconventional yeast. Y. lipolytica cell factory has been successfully constructed to produce various compounds and proteins, including oleochemicals, organic acids, nutraceuticals and , etc. Moreover, it also has been used to treat and degrade various pollutants, such as halogenated hydrocarbons, hydrocarbons, nitro compounds[1]. Owing to the clear inherited backgrounds and mature genetic operation of Y. lipolytica, we choose it as the microbial cell factory strain for producing γ-linolenic acid with the oil as the sole carbon source in our project. However, the wild Y. lipolytica shows an insufficient cell growth with oil as the sole carbon source, and lacks the linolenic acid synthesis pathway [2]. Therefore, we plan to improve Y. lipolytica's ability to utilize oil and introduce the linolenic acid synthesis pathway by metabolic engineering strategies with constructing the recombinant plasmids.

The plasmid pYLXP' was selected as the expression vector for genetic expression of genes in our project, which is a shuttle plasmid between E. coli and Y. lipolytica. The process of plasmid constructions also has been reported[4]. In brief, recombinant plasmids of pYLXP'-xx (a single gene) were built by Gibson Assembly of linearized pYLXP' (digested by SnaBI and KpnI) and the appropriate PCR-amplified or synthetic DNA fragments. Multi-genes expression plasmids were constructed based on restriction enzyme subcloning with the isocaudamers AvrII and NheI. All genes were respectively expressed by the TEF promoter with intron sequence (BBa_K3909008) and XPR2 terminator (BBa_K3909009), and the modified DNA fragments and plasmids were sequenced by Sangon Biotech (Shanghai, China). 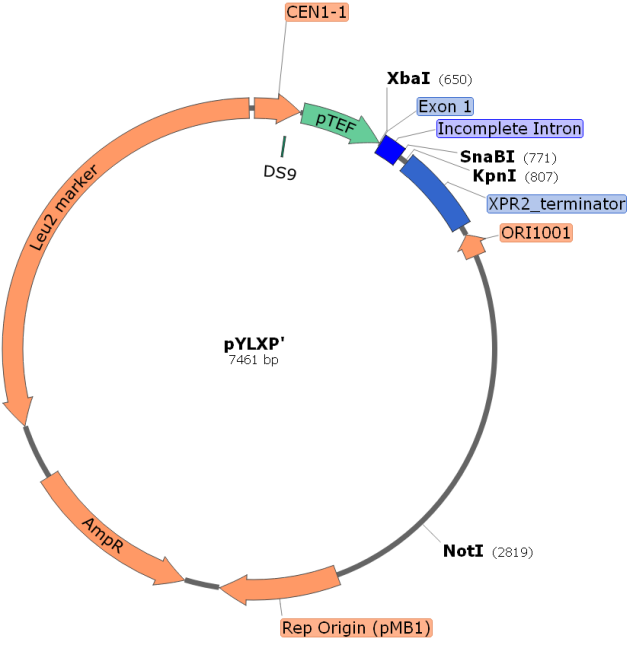 Fig.1 The plasmid map of pYLXP'

The plasmid P0 was selected for genomic integration of gene M-Δ6-D in our project, which is a 26s rDNA genomic integration plasmid[5]. The process of plasmid constructions also has been reported. For this, P0 was linearized by Nhel and NotI. And, the recombinant plasmid P0-6-D was built by Gibson Assembly of linearized P0 (digested by SnaBI and KpnI) and the PCR-amplified fragments of gene M-Δ6-D. 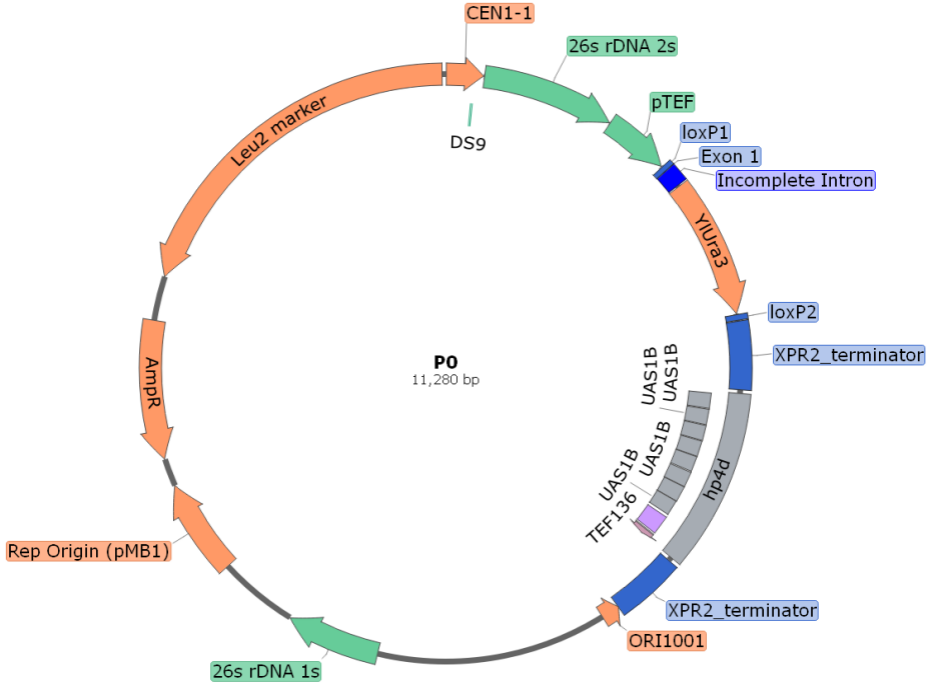 Fig.2 The plasmid map of P0

As shown in figure 3, our biobricks design is mainly divided into two parts: fatty acid degradation and γ-linolenic acid synthesis. 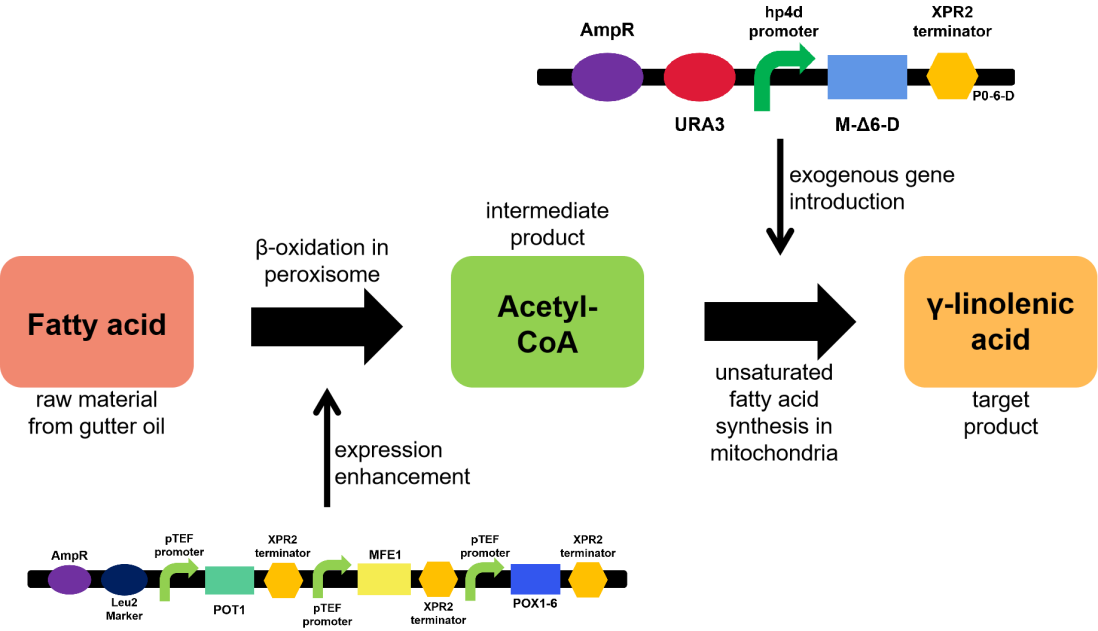 Fig.3 The overview of our biobricks design

Our goal is to improve the cell growth of Y. lipolytica and convert a large amount of gutter oil to γ-linolenic acid when Y. lipolytica grows with gutter oil as the sole carbon source . We plan to enhance the oli degradation pathway by expressing three endogenous fatty acid degradation genes ylMEF1 (BBa_K3909006), ylPOT1 (BBa_K3909007), and ylPOXn (from BBa_K3909000 to BBa_K3909005), which are related to the metabolim of transforming acyl-CoA into acetyl-CoA in peroxisome (β-oxidation). Specifically, the β-oxidation includes three steps: i) oxidation, that catalyzed by six acyl-CoA oxidases (translated from ylPOX1 to ylPOX6); ii) hydration and dehydration, that catalyzed by multifunctional enzyme (translated from ylMFE1); and iii) thiolysis, that catalyzed by 3-ketoacyl-CoA thiolase (translated from ylPOT1)[6].

For overpressing the whole oil degradation pathway, we further combined these genes by BioBrick method, and constructed plasmids pYXLP'-ylPOT1-ylMFE1-ylPOXn (from BBa_K3909018 to BBa_K3909023), as shown in figure 5. The Y. lipolytica Po1f we used cannot synthesize leucine by itself, so the Leu2 marker on the plasmid can be used as marker gene. Then, the constructed plasmids were transformed into Y. lipolytica Po1f. 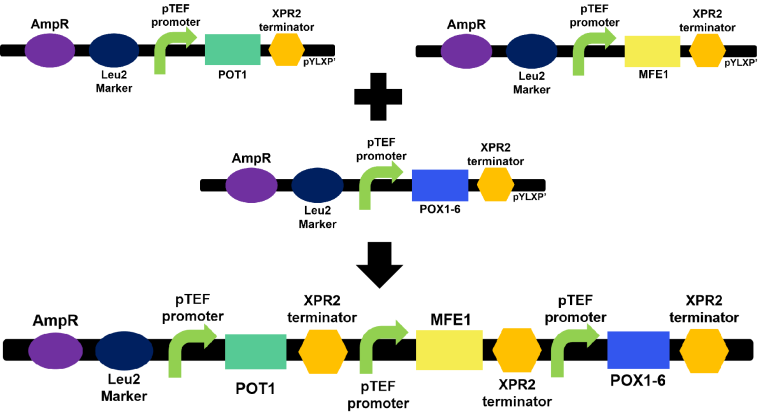 Our goal is to synthesize γ-linolenic acid (GLA) on large scale. In order to convert α-linolenic acid into GLA[7], we are going to introduce Δ6-fatty acid desaturase gene from Mortierella alpina (M. alpina) into Y. lipolytica genome[8][9]. 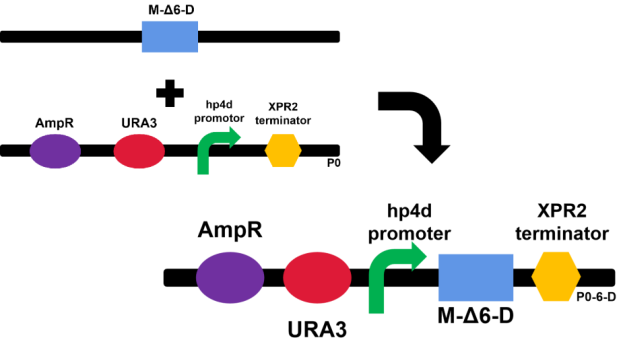 As shown in figure 6, the Δ6-fatty acid desaturase expression unit is made up of five basic parts: Ampicillin resistance gene, URA3 selection marker, hp4d promoter, M-Δ6-D gene, and XPR2 terminator. Except for M-Δ6-D gene, which was intercepted and imported from M. alpina, the other four parts are all endogenous genes. Since UAR3 can encode lactoside 5-phosphate decarboxylase, which can catalyze one of the key reactions in the synthesis of yeast RNA pyrimidine nucleotides, it can be used as a selection marker. After being transformed into the protoplast of Y. lipolytica, this cassette can work to produce Δ6-fatty acid desaturase and transform oleic acid into the product γ-linolenic acid.