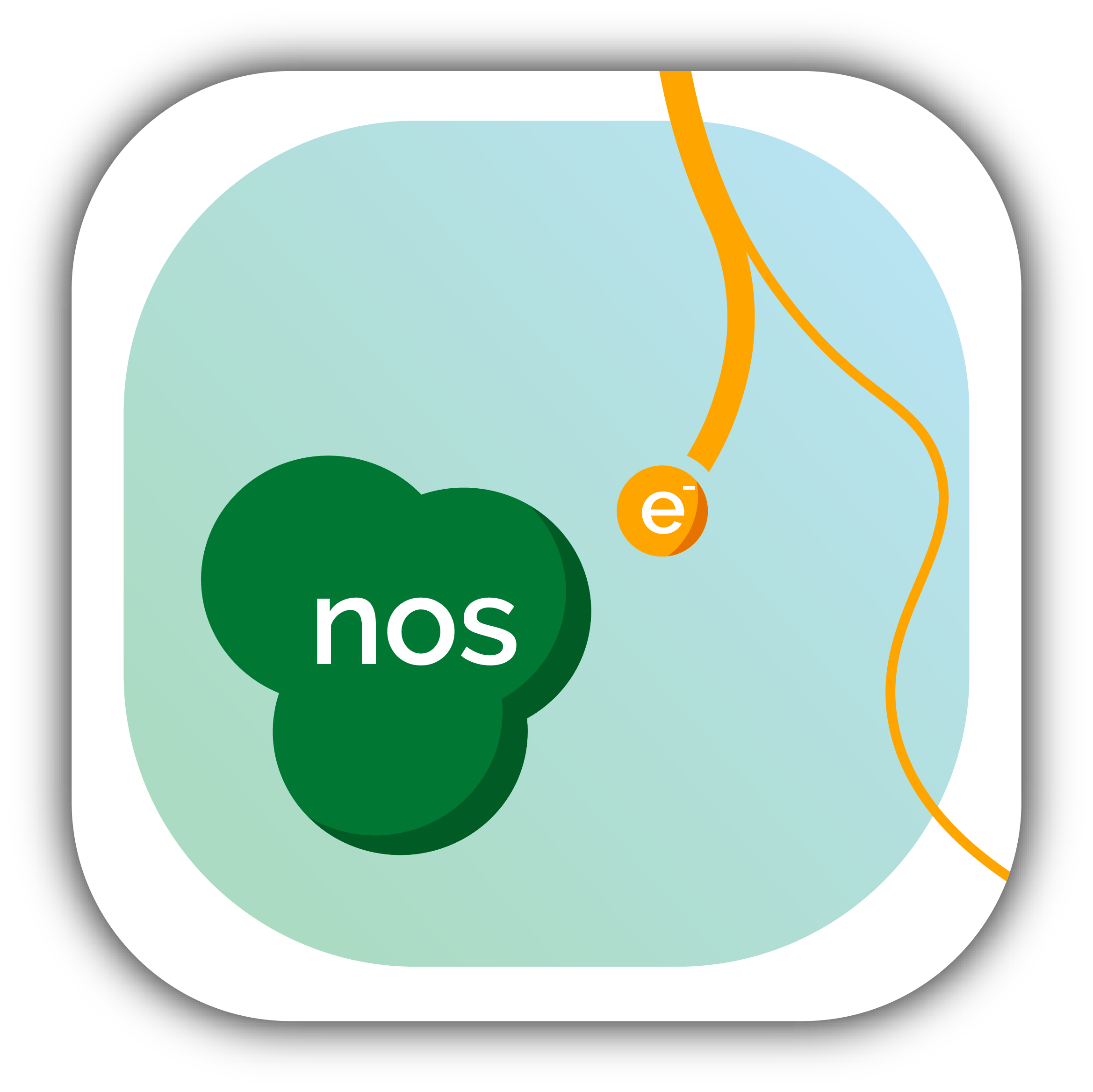 As part of the ammonia pillar, we aimed to reduce the nitrous oxide (N2O) production associated with the HNAD process. N2O is harmful for the environment. It is known that external factors such as: substrate type, organism, pH and carbon /nitrogen ratio influence the accumulation of N2O [1]. Moreover, in some conditions, electrons are allocated unevenly to the four denitrification enzymes, leading to accumulation of nitrous oxide [2]. To study whether N2O accumulates in P. putida we first expressed the denitrification machinery from P. stutzeri.

P. putida EM42 is strictly aerobic, which means that it uses terminal oxidases to dissipate electrons through oxygen respiration. To ensure N2O is not accumulated due to an insufficient electron supply, we attempted to redirect the electron flux towards the denitrification machinery. This was done by CRISPR interference (CRISPRi) downregulation of P. putida’s terminal oxidases. Because of this downregulation, less electrons are consumed in oxygen reduction leaving more electrons available to fuel the denitrification machinery.

We successfully measured nitrite accumulation and detected traces of produced nitrous oxide, suggesting that at least three enzymes of the integrated machinery worked. However, due to time constraints, we were unable to test the effect of CRISPRi downregulation on nitrous oxide production.

Both nitrification and denitrification processes (i.e. HNAD) can contribute to the formation of nitrous oxide. Nitrous oxide (N2O) is the penultimate compound in the to-be-engineered pathway (Figure 1) and is considered detrimental to the environment. N2O exhibits a global warming potential that is 300-fold that of CO2. Moreover, it can lead to depletion of the ozone layer [1]. Thus, accumulation and consequential escape of nitrous oxide should be prevented at all costs. 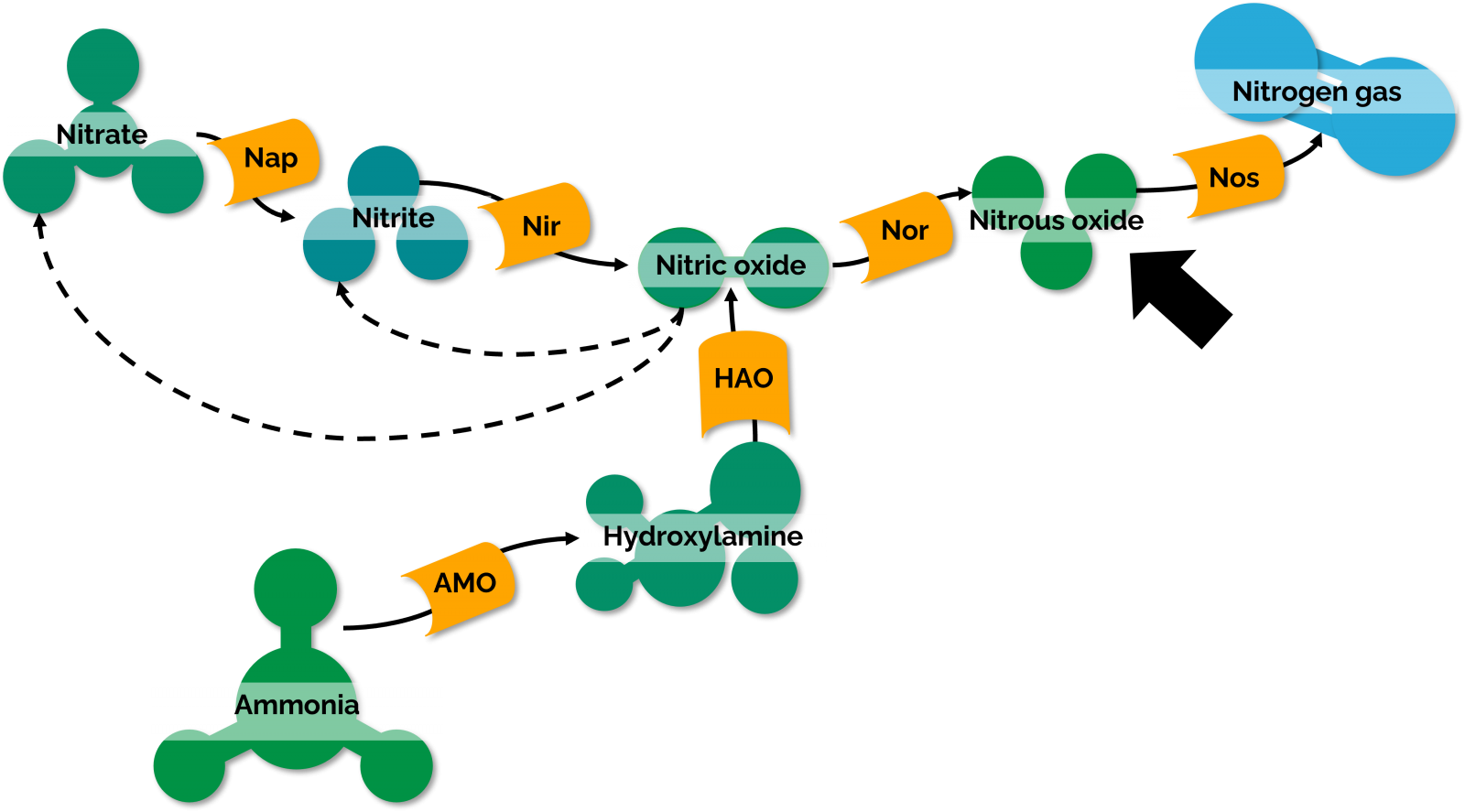 Multiple factors influence the efficiency of the HNAD system. For instance, more N2O is being produced if the dissolved oxygen (DO) is low, or when ammonia (NH3) and nitrite (NO2-) concentrations are high [3]. Moreover, the substrate type, biomass type, pH and C/N ratio (among others) impact the production of the intermediate N2O [1]. Another explanation for N2O accumulation, is that the distinct denitrification steps (Figure 2) influence each other through electron competition. Pan et al. [2] have shown that the competition arose when the supply of electrons did not meet the demand for electrons by the four reduction steps. During electron-limiting conditions, electrons were allocated differently to the denitrification enzymes. Nitrite reductase (Nir) was found to receive more electrons. The difference in allocation creates a discrepancy in reduction rates of NO2- and other downstream N-species (i.e. nitric oxide (NO) and (N2O), leading to N2O accumulation [2].

Upon establishing the denitrification machinery into P. putida EM42 ΔnasT, electron transfer pathways will resemble to those of the closely related species P. aeruginosa. Electrons are released through oxidation of organic compounds by respiratory dehydrogenases [4]. In P. aeruginosa, electrons can be consumed in both aerobic and anaerobic respiration processes. Aerobic respiration in P. aeruginosa is identical to P. putida, with five terminal oxidases, catalyzing the four-step reduction of oxygen to water. Moreover, the respiratory chain further branches into the denitrification enzymes (Figure 2), which enable P. aeruginosa to grow anaerobically [4].

In the context of Cattlelyst, operated aerobically, both oxygen and nitrate will be used as oxidizing agents. This means that P. putida will dissipate electrons to oxygen and nitrate reduction at the same time. This process, referred to as co-respiration or aerobic denitrification is seen for both P. aeruginosa and P. stutzeri . However, the exact reasons why these closely related species co-respire remains elusive. A big known downside of aerobic denitrification is the higher risk for accumulating N2O [5].

A conceivable explanation could be the electron competition between the denitrification enzymes. If a microbe is co-respiring, part of the electrons is ‘lost’ in oxygen respiration and the remaining electrons are to be allocated between the four denitrification enzymes (Figure 2) The fact that another electron sink (oxygen respiration) is active could increase the possibility that the electron supply and consumption by denitrification are unbalanced, resulting in N2O production. Thus by generating a P. putida EM42 strain with the ability to co-respire, there is a potential to accumulate N2O , which, due to its harmful effects on the environment would defeat the purpose of Cattlelyst. Therefore, we dedicated this wetlab project to prevent N2O accumulation.

Quantifying growth defects by the CRISPRi downregulation of the terminal oxidases

Multiple growth experiments were performed to measure the effect of the spacers on growth. We noticed that there was a lot of variability between biological replicates. This could suggest that growth was affected by the spacer, but we could not know for sure. In the final experiment, we were able to test all 15 spacers, 2 or 3 biological replicates in technical duplicates. 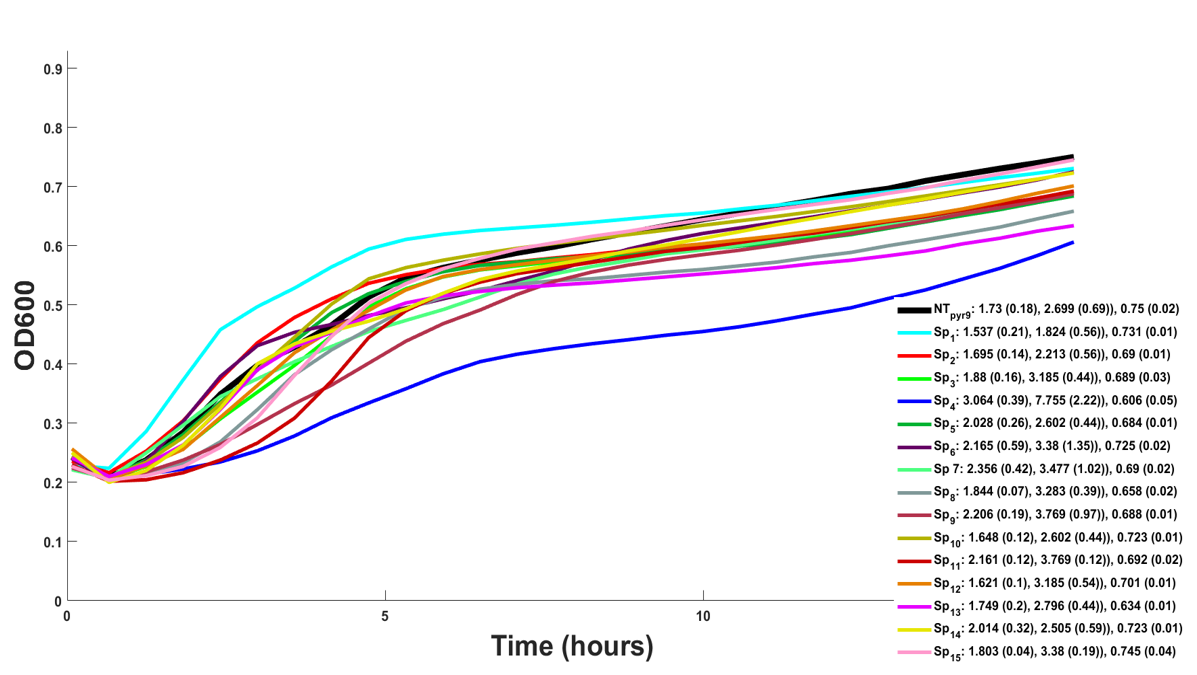 We also computed the time at which the exponential phase started. We found that for Sp4, targeting the promoter of the Cyo oxidase, the exponential phase was delayed most. Overall, the values for exponential delay were quite variable for the different spacers and therefore difficult to be conclusive alone. From these analyses we can conclude that targeting the promoter for the Cyo oxidase is most impactful in impairing growth.

This spacer most likely affects growth as it targets the Cyo terminal oxidase which has a significant effect on the cell transcriptome [16]. Moreover, this oxidase is the only oxidase active during the exponential phase, which explains why we see the growth defect only during this growth stage (Figure 9). The other oxidases, i.e. the CIO oxidase, the Aa3 oxidase, the Cbb3-1 oxidase and Cbb3-2 oxidase are active during the stationary phase (Table 1). When other oxidases take over, which has been shown upon knocking out the Cyo oxidase, the effect of downregulation could have been lost.

Table 1: Terminal oxidases, when active and effect on growth when knocked out [16].

To further pinpoint which spacers are most effective in downregulating the terminal oxidases, we performed several quantitative PCR runs. However, due to insufficient time and resources we could not pursue this for all spacers. The next step is to develop a multiplex CRISPRi plasmid, targeting several terminal oxidases, such as the Cyo oxidase and Aa3 oxidase, at the same time. To test whether nitrous oxide production is can be reduced with our approach, the multiplex plasmid will be transformed into P. putida :SD. Unfortunately, due to time constraints, we were not able to combine the CRISPRi with the plug-and-play strain.

To test Nap activity for P. putida :SD we performed a Griess assay to quantify nitrite accumulation (Figure 11). Additionally, we tested the effect of IPTG induction on the accumulation of nitrite. For this condition, :SD+, the denitrification pathway is expressed to a higher extend. With IPTG, overall expression of the system was higher, which was also reflected in the OD600. The higher metabolic burden resulted in a OD600 66% lower than that for :SD without IPTG.

Compared to the control P. putida ΔnasT, more nitrite accumulates for both :SD and :SD+, demonstrating that the integrated Nap works. However, when compared with the Nap plasmid (Nap from Paracoccus denitrificans), less nitrite accumulates. This could imply that (1) the nitrate reduction was not as optimal as for the Nap plasmid or (2) that Nir was active. Nir reduces nitrite to nitric oxide, this concatenated reduction step could explain the lower amounts of nitrite accumulated for :SD. The fact that :SD+, accumulated less nitrite compared to :SD could be explained by the higher expression of all denitrification genes increasing pathway efficiency. 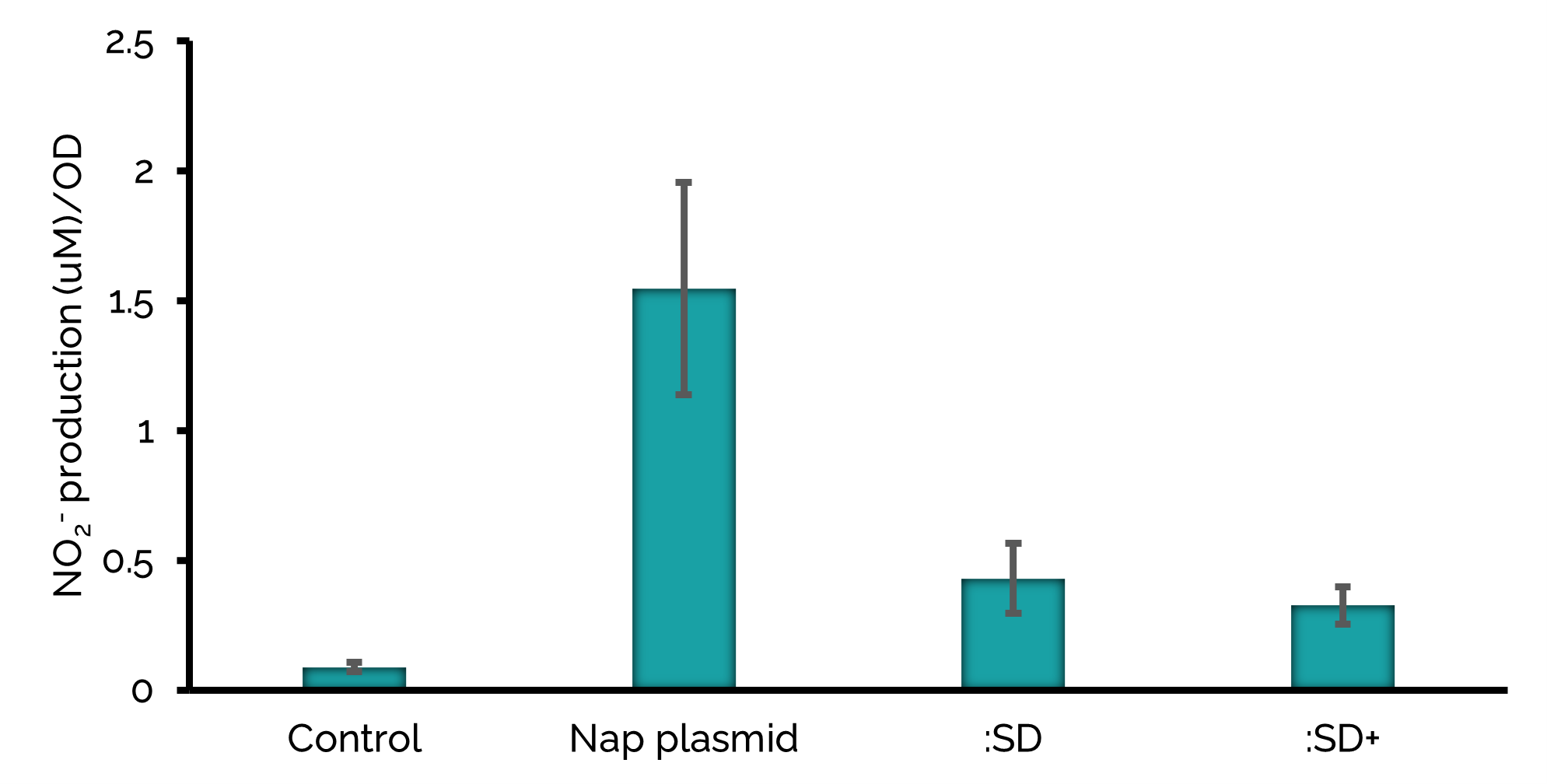 Figure 11: NO2- production byP. putida EM42 ΔnasT containing the Nap operon originating from P. denitrificans on plasmid (Nap plasmid) and P. putida :SD growth without IPTG (:SD) and with IPTG (:SD+). The NO2- production was corrected for the change.

Within the timeframe of iGEM, we were able to perform one GC-MS experiment for which we measured the N2O concentration at t0, t24, t48 and t139 in the headspace. Over the timeframe, no N2O accumulated for P. putida :SD. However, for two out of three biological replicates of P. putida :SD+ we noticed a slight increase in N2O (Figure 12). These preliminary results suggest that the combined Nap, Nir, Nor enzymes work as nitrous oxide is accumulating slightly. This accumulation could happen due to a lack of electrons, as illustrated by Pan et al. [2]. This could also be explained by the fact that Nos is active in this strain and that it further reduces nitrous oxide, explaining only the small accumulation. However, to know for sure, this experiment needs to be repeated. 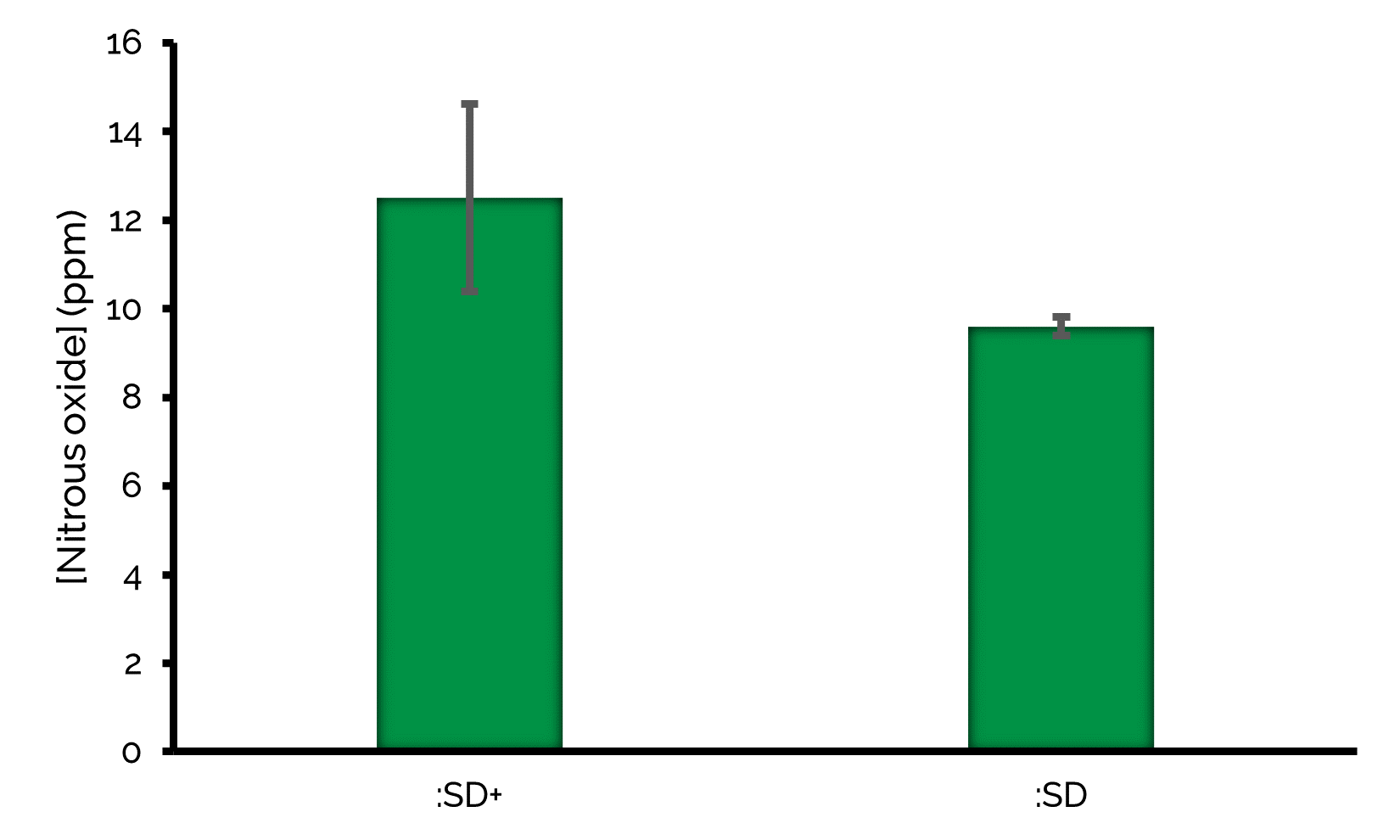 Nos activity was tested by culturing P. putida :SD with 0.5% (5000 ppm) N2O in the headspace and subsequently measuring the reduction in N2O with GC-MS at t=0, t=24, t=48. Unfortunately, no significant reduction of N2O consumption was observed. We used P. stutzeri JM300 as a positive control to check if this native denitrifier could convert N2O into N2, but also no reduction of N2 was observed. This could indicate that the experimental conditions were not optimal for Nos activity, or that the reduction was so little that it could not be measured with the current GC-MS settings. Similar to the mosaic approach, within the time frame of iGEM it was not possible to repeat this experiment.

To reduce nitrous oxide production, we developed the strain P. putida :SD encoding for the complete denitrification machinery from P. stutzeri. To test the pathway, we measured if intermediates were accumulated. These tests showed that nitrite accumulated, and traces of N2O were detected, suggesting that the first three enzymes of the pathway are active. However, more research needs to be done to derive conclusions.

In-parallel we developed 15 CRISPRi plasmids to downregulate the terminal oxidases in P. putida. We learned that quantifying the effect of the spacers on growth was difficult. Biological replicates showed a lot of variability and the results obtained in different growth experiments were not consistent. We learned that for the spacer targeting the promoter of the Cyo oxidase (Sp4) growth was impaired. Unfortunately, this effect was lost soon, which could be explained by the upregulation of the other oxidases. To be able to pinpoint the most efficient spacers in downregulating terminal oxidases, we performed quantitative PCR experiments. However, due to insufficient time and resources, no conclusions could be drawn from these experiments. Our next step is to combine both projects and test the effect of the CRISPRi downregulation on nitrous oxide production.