We believe that this software tool is the first step in the development of a new philosophy that promotes the progression of genetic engineering beyond the borders of the supervised lab in a safe and controlled manner.

Due to the novelty of this initiative, the models and software we have proposed are just the tip of the iceberg in means of further progression of this idea, thus many additional aspects may be added in order to improve this technology and broaden the supplied abilities.

The future directions are in different research and development steps, but they all clarify the critical role of this technology in the future of synthetic biology and include the following components:

Bacterial origin of replication, also known as “OriC”, is a specific region in the bacterial chromosome that is responsible for regulating the process of DNA replication. OriC’s are diverse in size (250bp to 2kbp) and contain three important functional elements that control origin activity:


The nucleotide sequence of OriC is highly diverse across unrelated species, thus they are not active in or interchangeable between unrelated bacteria. OriC is diverse in terms of chromosomal loci, genetic context, nucleotide sequence, length, and continuities. In some bacteria, the OriC is composed of two separate subregions (bipartite), each of which contains DnaA boxes, but only one contains DUE. The subregions are separated with a spacer gene (usually DnaA).

In most bacteria, DnaA boxes consist of a conserved 9-mers sequence. The number of boxes is usually different from species to species. Not surprisingly, DnaA in certain bacteria was demonstrated to recognize OriC/DNAa boxes of different bacteria, due to the similarity of DnaA boxes. However, the protein wasn’t able to bend the DNA structure in the same manner for unwinding the DNA strands. This provides further evidence that even when there are apparent similarities, the DnaA-OriC systems of individual species are not easily interchangeable. 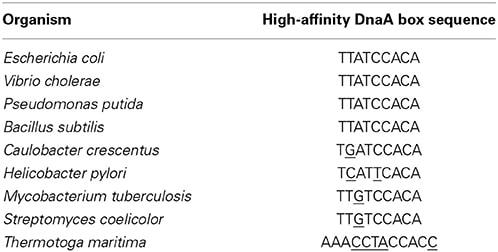 The DUE region is a typically AT-rich stretch of nucleotides [2] that often includes characteristic repeated AT-rich sequences (e.g., that of E. coli comprises three 13-mer repeats) separated by short, non-AT-rich insertions. DUE regions are thermodynamically unstable compared to their neighboring sequences, rendering them susceptible to superhelical stress arising from the formation of the DnaA oligomer. The initially unwound region ranges from 20 to 60 bps in size, depending on the organism, which seems to provide sufficient space to accommodate a replicative helicase, DnaB. The bacterial DUE regions are always located upstream or downstream of one or more DnaA box clusters, never in the midst of a cluster. It is important to note that the distance between the DUE and its proximal DnaA-box cluster is critical, as even slight changes were found to inhibit oriC unwinding.

We found “GammaBoris”, which has 25,000 different genomic ORIs but not plasmid sequences, so we kept searching and found Ori-Finder. The Ori-Finder system is designed for the oriC prediction in bacterial and archaeal genomes, which integrates gene prediction, analysis of base composition asymmetry, distribution of DnaA boxes, occurrence of genes frequently close to oriC regions and phylogenetic relationships. The system even has a database, DoriC, which includes the predicted results by Ori-Finder system and experimentally confirmed oriCs from literature in PubMed. The database stores over 9,928 records of prokaryotic chromosomal origins and includes 1209 records of plasmid replication origins for the first time. Unfortunately, this database still doesn't have enough data for plasmid ORIs. We are currently searching for another algorithm to locate the plasmid OriCs of different organisms to better understand the differences between the species.

Once we have enough data, we can engineer the plasmid ORI according to the ORI sequences from all optimized bacteria. We will develop a metric to compare and rank different features in the OriCs so that we can cluster them into very closely related groups. We will return a consensus sequence for each cluster and insert it into the plasmidin order to create a shuttle plasmid (a plasmid that is built in a way that enables propagation in two or more different host species [3]). This will lead to an ORI which optimizes the replication in the wanted hosts.

The Shine Dalgarno (SD) sequence is a ribosomal binding site in the mRNA which is located upstream of the start codon (AUG) and facilitates the initiation of protein translation[1,2]. We wanted to check whether the distance between the SD sequence to the start codon varies between different species. If indeed there is a significant difference, we can consider the "preferred distance" of the wanted species when we build our plasmid to enhance its expression in the wanted species over the other organisms.

Our work assumptions are:


We calculated the distance according to the algorithm described below:


*The energy map is a table that contains the bond energy of the canonical aSD sequence to every possible six base pair-long RNA sequence. The table was made by Shir Bahiri from Tuller’s lab.

Figure 4: An example sequence from E. coli. ATG is the start codon, ACGAGG is the subsequence with the most negative energy bond to the aSD within this 3o bases long sequence, and the RED arrow marks the SD distance (8 in this case)

We can see the distributions of the distances for each species below: 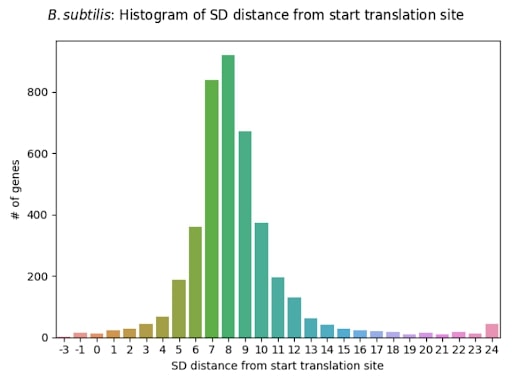 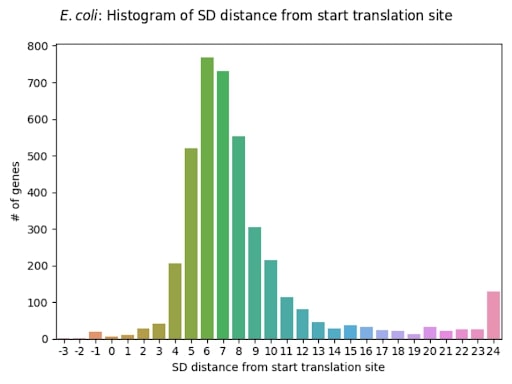 However, while according to T-test and Mann-Whitney U-test, there is difference between the distribution of the distances (p-value of 2.984e-03 and 4.164e-61 respectively- compete in the evening), it is not different enough to conclude that one species strongly prefers a specific distance between the SD sequence to the start codon. Hence, we decided not to use this feature in our next software version.

By sequencing the CRISPR system of the different bacteria in the microbial community, we hope to identify crRNA (CRISPR RNA) that are uniquely present only in the deoptimized organisms. Regions complementary to the specified crRNA will be inserted into the designed plasmid along with the corresponding PAM sequence incorrect placing (similarly to the restriction sites), to promote selective cleavage and digestion of the plasmid in the deoptimized organism. 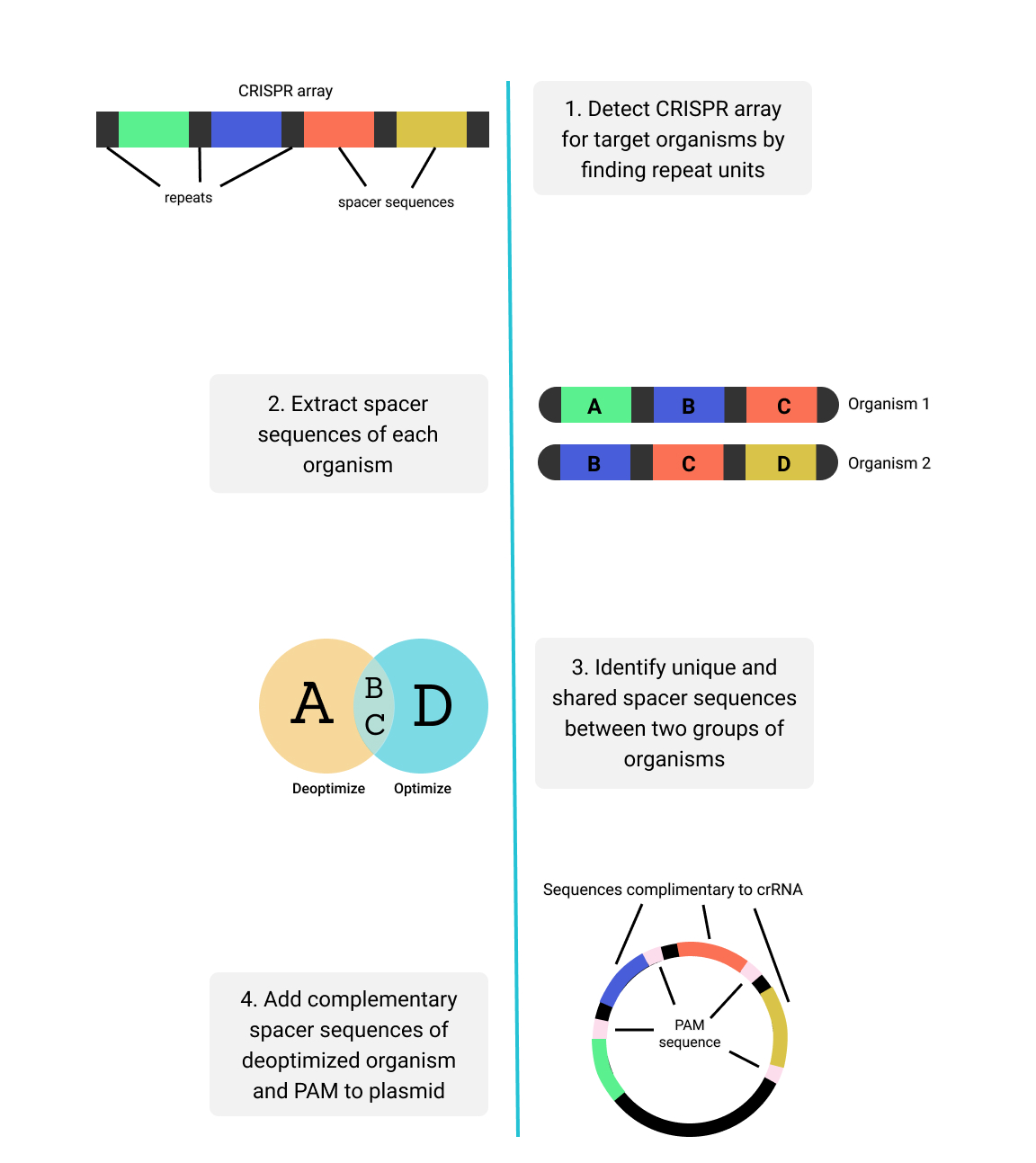 When we talked with Prof. Elhanan Borenstein about our optimization strategy, he brought up his concern about how optimal a one-plasmid solution could really be. If, for example, the organisms from the optimization group are distant from one another in terms of codon usage bias distribution, one plasmid which is optimized for both organisms would not be optimal for any of them. Instead, he suggested incorporating a multiple-plasmids solution, where each one of the plasmids is optimized for only a part of the optimization group - and deoptimized for the whole deoptimization organisms. This solution might lead us to a more optimal specific gene expression than the one-plasmid solution.

In order to implement this approach, we intend to use a metric that can divide optimization organisms into several groups. One of the ways to define such a metric for translation optimization is to calculate the distance between codon usage bias profiles of different organisms. Therefore, the metric will reflect the distance between two organisms in terms of evolutionary adaptation of mRNA translation. The smaller the distance, the more likely that two organisms enter the same group, and there is one plasmid which is optimized for both.

However, the optimization cannot result with as many plasmids as we want, because of the restrictions of transformation in the lab. Physical restrictions tend to be flexible and can be later determined by the user. We intend for this method of optimization to be integrated into the next version of our software tool. 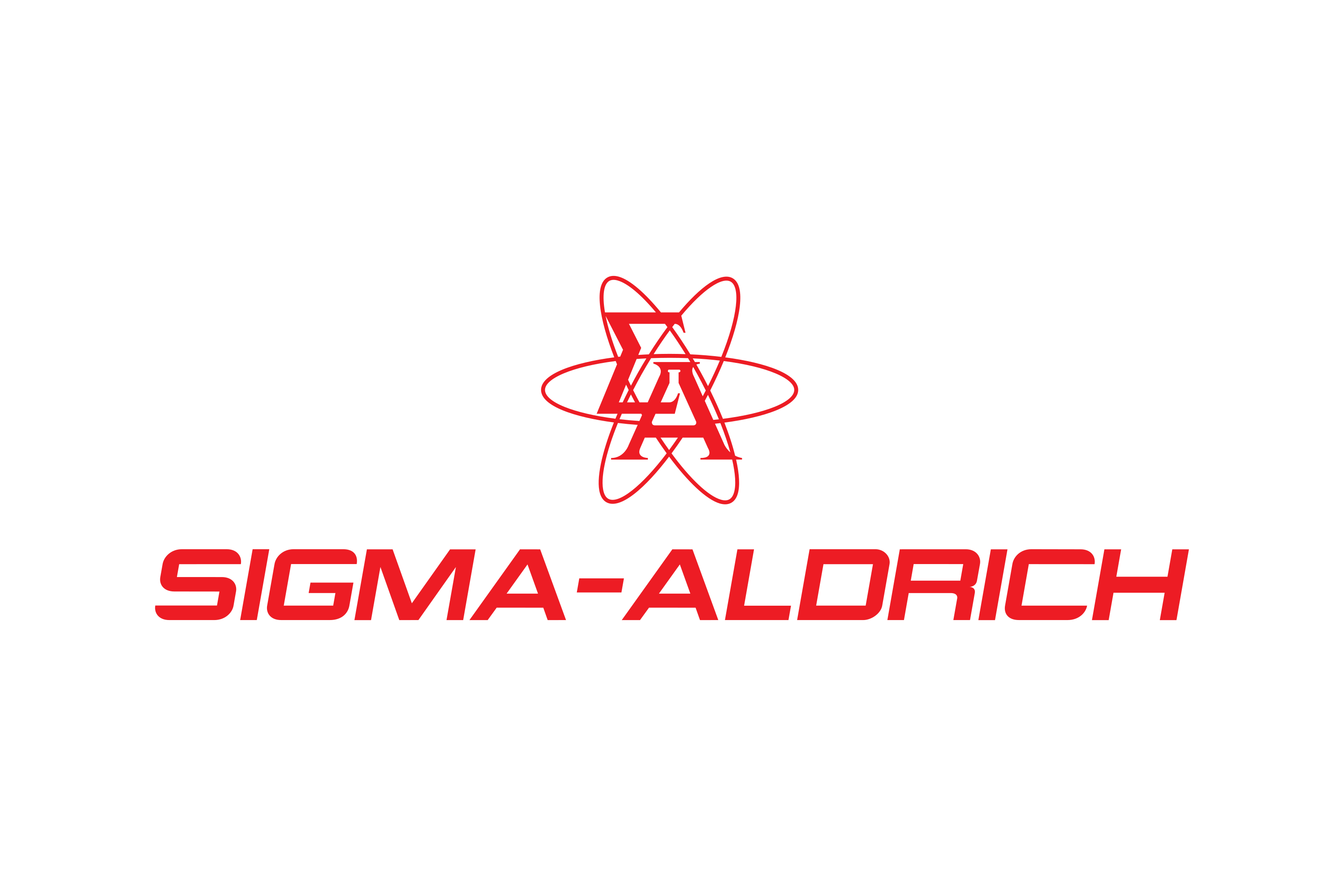