We improved a part from the 2014 Tuebingen team: α-Galactosidase (α-Gal) from Bacteroides fragilis (Part:BBa_K1483002).

α-Galactosidase is an enzyme that catalyzes the cleavage of the galactose off of B type blood antigens such that the remaining sugar can be classified as a H antigen, which the anti-A and anti-B antibodies are unable to recognize and thus does not elicit an immune response in the human body (Rahfeld and Withers, 2019). Therefore, the enzyme can convert B blood types to universal O type.

Unsuccessful Expression of Past Part

We obtained the amino acid sequence of the α-Gal protein from the iGEM DNA Repository Plate (BBa_K1483002), as entered into the iGEM parts collection database by the Tuebingen iGEM team in 2014. 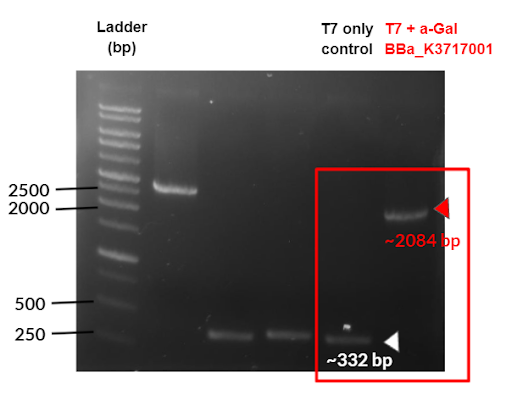 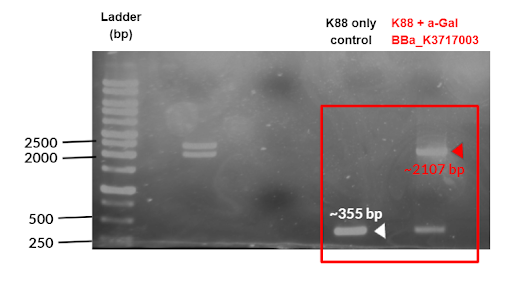 Figure 2 - Colony PCR check for strong promoter (K88) + α-Gal (Part: BBa_K3717003) using VF2 and VR primers. Uncut plasmid (K88 only control) has a band at the expected part size of 355 bp, indicated by white triangle. Confirms successful ligation as a band is produced at the expected size of 2107 bp, as indicated by the red triangle.

We tested protein expression of these two composite parts by transforming our plasmids into BL21 E. coli cells. We grew cultures at 37°C overnight, diluted those cultures, and then grew to OD600 0.5~0.6 at 37°C. We then induced expression with 0.5 mM IPTG and allowed cultures to grow overnight at room temperature. We took samples pre-induction and post-induction and examined them by SDS-PAGE. 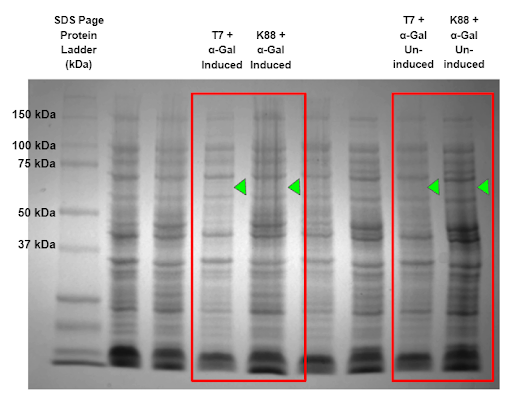 Our SDS-page (Fig. 3) did not show any overexpression bands for the enzymes of interest. The results indicate that there were no target proteins at their expected band sizes: 65.7 kDa band for both T7 promoter + α-Gal and K88 promoter + α-Gal in the induced sample. As the SDS page is of cell lysis samples, other bands present are due to innate proteins present in the bacteria cell.

Upon comparison of the amino acid sequence from Tuebingen’s part (BBa_K1483002) with full sequences that were offered by other studies online, we discovered that the enzyme sequences were missing a few amino acids, also including the start codon, which explained the non-expression of the proteins (Fig. 4).

We tested protein expression of the composite parts by transforming our plasmids into BL21 E. coli cells. We grew cultures at 37°C overnight, diluted those cultures, and then grew to OD600 0.5~0.6 at 37°C. We then induced expression with 0.5 mM IPTG and allowed cultures to grow overnight at room temperature. We harvested cells by centrifugation and lysed cell pellets through either sonication or with xTractor Lysis Buffer (XTractorTM Buffer & XTractor Buffer Kit User Manual, n.d.) supplemented with 20 mM imidazole. We purified our histidine-tagged proteins using Ni sepharose affinity chromatography. We then utilized SDS-PAGE to confirm the sizes of purified proteins. 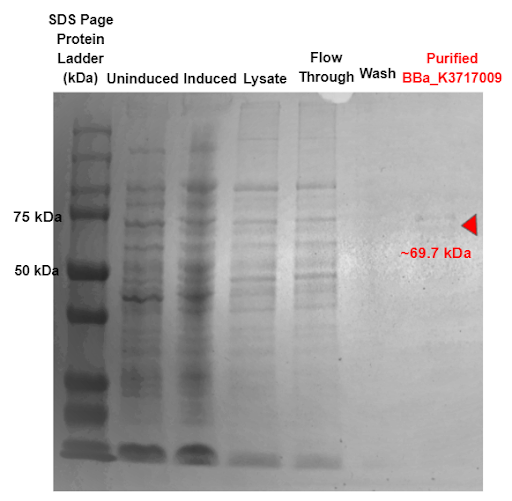 Our results in Fig 9 indicate a protein band at 69.7 kDa, which is the molecular weight of our α-Gal enzyme with the 6x His tag and GS linker attached. This shows that our α-Galactosidase (Part: BBa_K3717009) was expressed and purified. 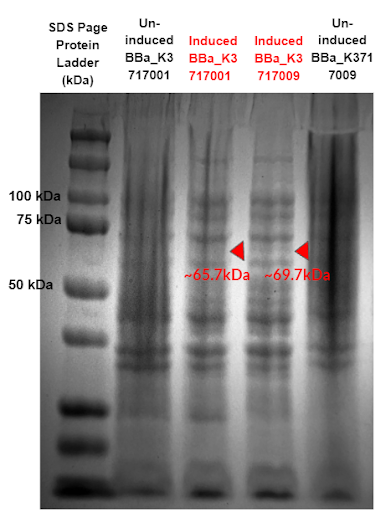 We obtained colorimetric substrates for the enzyme from Sigma Aldrich (Fig 11). This substrate contains a 4-nitrophenol leaving group, which turns yellow upon successful cleavage in solution. The concentration of 4-nitrophenol was quantified at absorbance 405 nm using a 96 well plate based assay (Held, BioTek)

We performed small-scale colorimetric tests to verify the function of the enzyme. To each well, we added 50 μL of 10 mM substrate, 10 μL of enzyme, 30 μL of water, and 10 μL of 10x Glycobuffer 1 (50 mM CaCl2, 500 mM sodium acetate, pH 5.5), a buffer recommended by New England Biolabs to ensure optimal enzyme activity (NEB). Following 2 hours of reaction at room temperature, we diluted the well contents in 1.9 mL of water and took absorbance readings at 405 nm. Results indicate that α-Gal successfully cleaved its substrates (Fig 12). Moreover, we demonstrated the specificity of the enzyme through the lack of enzyme activity on the other substrate.

Figure 12 - Absorbance of reaction solutions in small-scale colorimetric tests verify the functionality and specificity of the enzymes. a) 96-well plates following enzyme reaction. b) absorbance readings of diluted well contents (accounted for dilution). c) buffers and solutions used in substrate and control wells.

To quantify the activity of the enzyme, we performed enzyme reactions at various substrate concentrations and measured the absorbance at different time intervals over a constant time period (Fig 13). Results from at least 3 independent trials for each enzyme were averaged and used to calculate Michaelis–Menten constants for enzyme efficiency (see enzyme kinetics model in modeling). The colorimetric substrate tests show that the functionality of α-Galactosidase is successful. 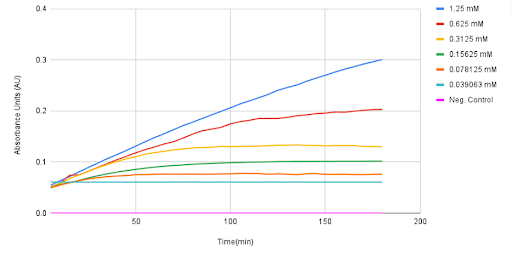 In order to evaluate the enzymatic activity of α-Gal, we used melibiose as the substrate for enzyme reactions followed by detection through normal-phase thin-layer chromatography (TLC), which utilizes the competition of the solute and mobile phase for binding sites to separate compounds based on affinity. α-Gal can cleave the bonds in melibiose, causing the dissolution of melibiose into its constituent monosaccharides, glucose and galactose (Fig 14). 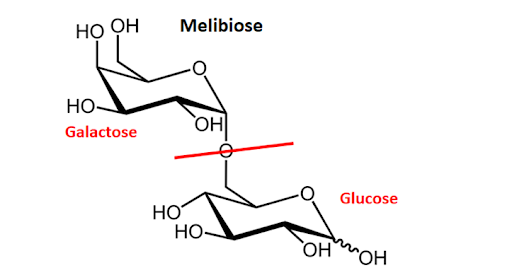 To test our method, we spotted controls of melibiose, lactose, as well as glucose and galactose samples onto TLC plates then run with a mobile phase of ethyl acetate : ethanol : acetic acid : boric acid (5:2:1:1, v/v/v/v) (Fig 15). We visualized the plate with a spraying reagent consisting of sulfuric acid : ethanol (1:1, v/v), followed by heating at 140°C for 5 minutes. We observed bands both in ambient light and at 365 nm, and we measured Rf values as the solute front (orange line) divided by the solvent front (yellow line). Based on our experiments, we were able to determine that glucose and galactose migrate significantly further up the plate compared to lactose and melibiose, with hRf values of 55.9 ± 2.8 for glucose and galactose, 33.3 ± 1.3 for lactose, and 33.1 ± 1.4 for melibiose. 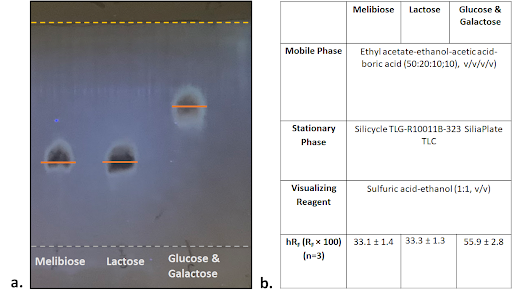 With our TLC detection method in place, we proceeded to test the functionality of α-Gal. We incubated 10 μL of 10 mg/mL melibiose with 5 μL of enzyme or water (negative control) and 5 μL of 0.1 M citrate-phosphate buffer (pH 5.8) at room temperature for a total reaction time of 2 hours (Takasaki 1975). We then spotted the control and enzyme reaction sample on TLC plates and developed them using the predetermined (see above) TLC parameters and visualization steps (Fig 16). Our results demonstrate successful cleavage of its substrate by α-Gal, as indicated by the band with a hRf that corresponds approximately to the measured hRf of glucose and galactose. 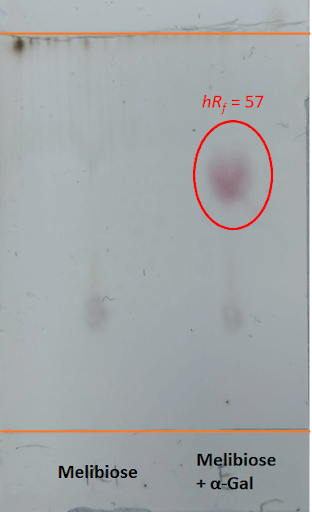 Figure 16 - TLC plate of melibiose treated with water and α-Gal under ambient light. There is clear cleavage of melibiose into glucose and galactose from the enzyme reaction.

Given that the colorimetric results were positive, we wanted to further test the enzyme’s specificity by using trisaccharides as substrates. These trisaccharides contain three monosaccharides that have identical chemical structures to the A and B antigens found on RBCs. To test a proof of concept functionality of α-Gal in cleaving the B-antigen trisaccharide, we carried out a reaction of the enzyme and its trisaccharide dissolved in 1X GlycoBuffer (New England BioLabs), deionized water, and purified BSA for 1 hour at 37°C. The B-antigen trisaccharides were kindly supplied by Professor Dr. Todd Lowary from the Institute of Biological Chemistry at Academic Sinica (Lowary 2010). 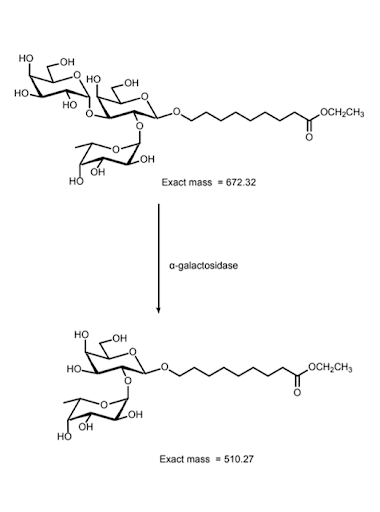 The results shown by the mass spectrometer confirm the functionality of α-Galactosidase. The experimental unit shows the presence of the cleaved fragment from the reaction with the B-antigen trisaccharide, indicated by the peak at 533 g/mol in the mass spectrum (Fig 18). The negative control confirms the specificity of α-Gal, as the A-antigen trisaccharide was not cleaved, indicated by the peak at 736 g/mol (Fig 19). Throughout all readings of the mass spectrum, the molar mass of the peaks have been increased by 23 g/mol due to a sodium adduct. Unrelated peaks/background noise can be attributed to compounds present in the buffer solution. 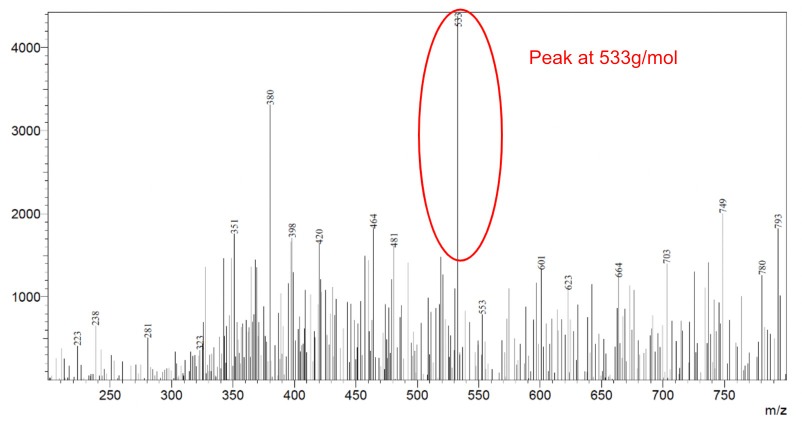 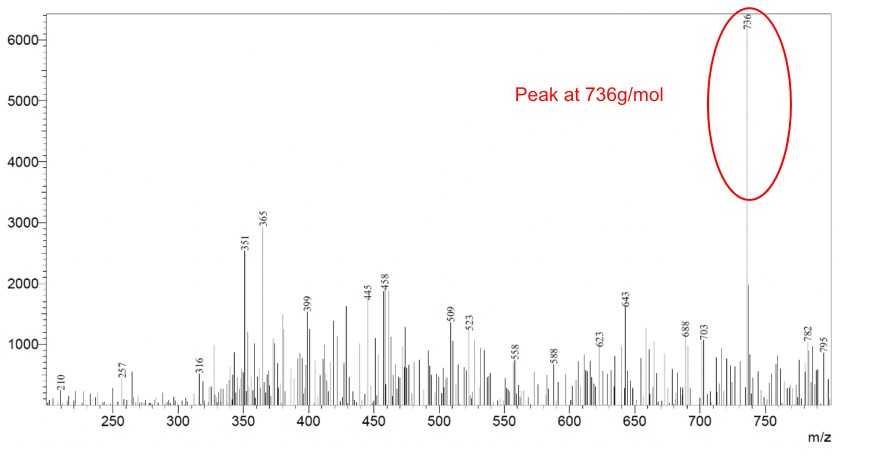 Mass spectroscopy results from the reaction between α-Galactosidase with B-antigen trisaccharide substrate demonstrate its ability to cleave its specific trisaccharides, demonstrating the proof of concept that the enzyme is able to cleave the B blood group antigens.