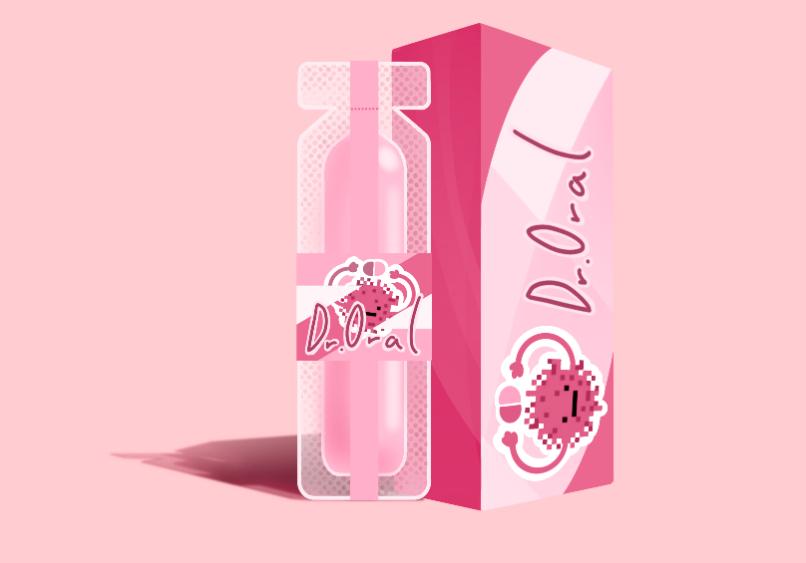 In order to obtain the most successful protein expression, we resulted in using the popular E. Coli as the bacteria for this experiment. This is because E.Coli is known to be the most practical bacteria due to its rapid expression, inexpensive cultivation, and high yield.


Ensuring that our proposed target gene, VP7 has been successfully expressed by testing through SDS PAGE and Western Blot.

SDS-PAGE is a gel electrophoresis technique used for protein separation based on their molecular weight. Our purpose was to identify the presence of new proteins and confirm whether they are our proteins of interest --- VP7 and VP7-LTB.

First, we made a Polyacrylamide gel, which consists of the pink stacking gel and the transparent separating gel.

We inserted the gel into a chamber and filled in some running buffer, and then we pipetted protein samples into the wells, except for the first and last wells, we filled in with marker proteins, as a reference to determine the molecular weight of the proteins in the sample. Lastly, we connected the electrodes to the power supply and start running the gel. 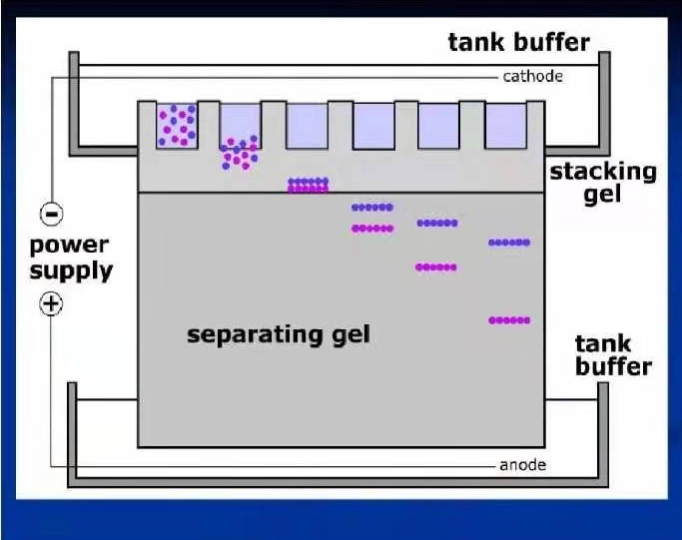 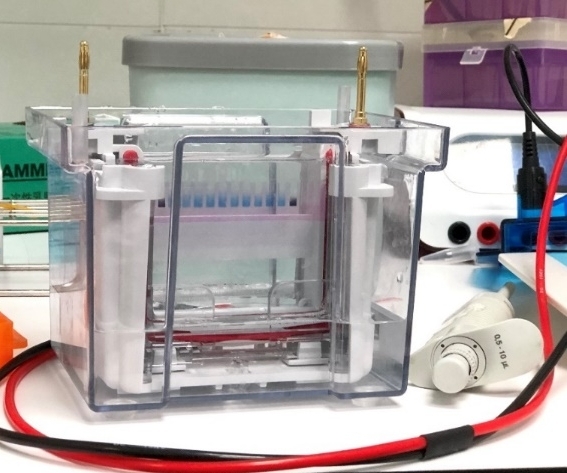 Since the proteins were all denatured by heating at 95 degrees Celsius and masked by negative charge, they would run from negative to positive terminals. First, they went through the stacking gel, which had large pore size, so both large and small proteins were able to move in the same speed, eventually stacking on one “starting line” prior to entering the separating gel. In the separating gel, the pore size was much smaller, which allowed small proteins to run faster than the larger ones. As a result, the proteins got separated based on their molecular weight.

After running the gel, we stained it with Coomassie Brilliant Blue to visualize proteins. After the excess stain was eluted, blue bands of new proteins were revealed. The next step would be to confirm whether they were our proteins of interest.

We have three groups of samples which are VP7-LTB induced by 1nm of IPTG, VP7-LTB induced by 2nm of IPTG, and VP7 induced by 1nm of IPTG. We took OD600, which is an abbreviation indicating the optical density of a sample measured at a wavelength of 600 nm, for each of the groups. The optimal density id proportional to the concentration of the sample. Thus, it is used to measure the concentration of the bacterium. After testing the samples which the OD600 of those is about 1, we collect five groups of each at 0, 2, 4, 5, and 6 hours to run the SDS page.

Below are the imgas of SDS PAGE results: 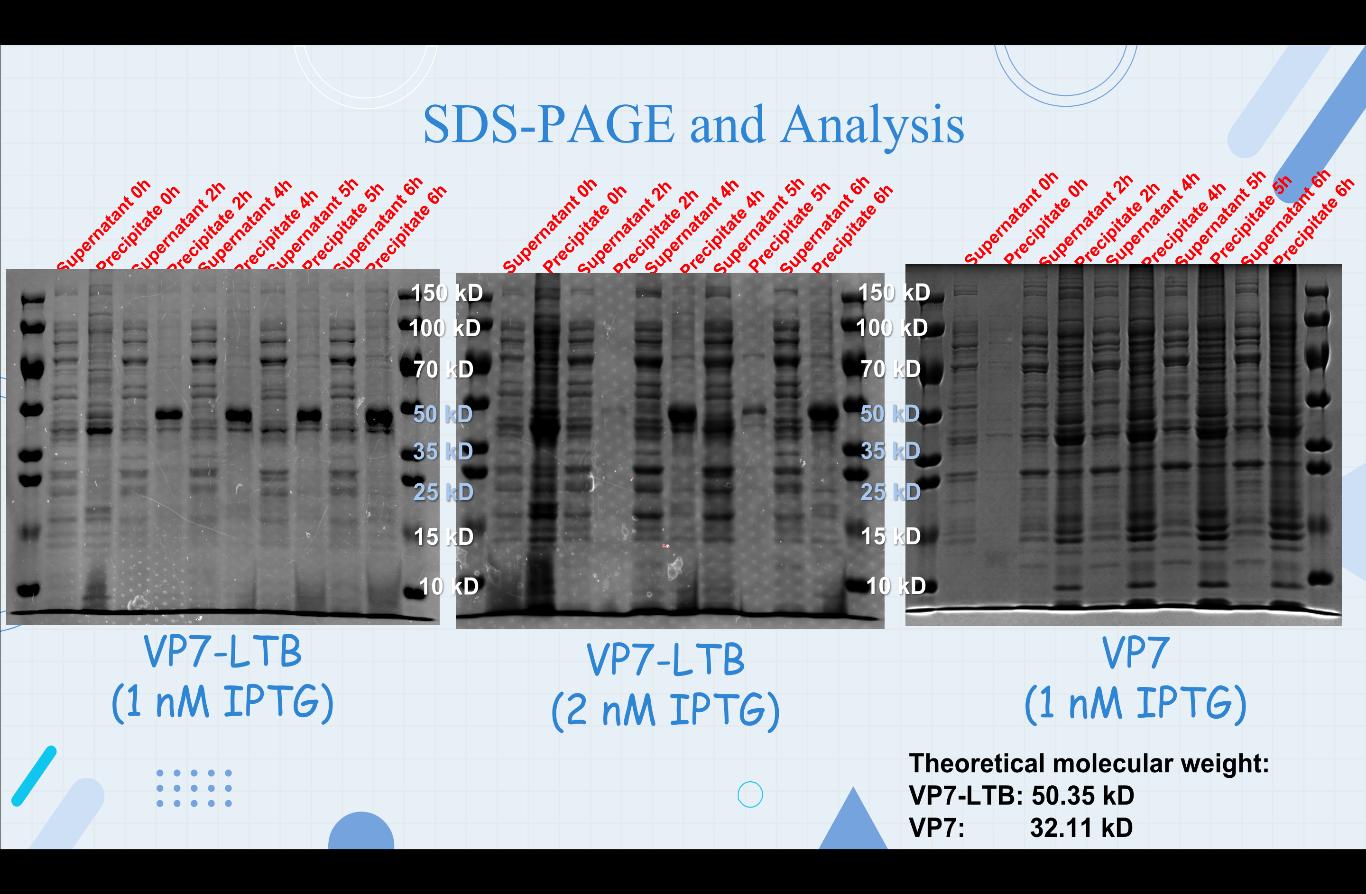 Compared the samples of the precipitates and the supernatants at 0h and other times of the figure on the left, we could see an extra band that is at a little below 50 kD. If there are extra bands, it is highly possible that they are our target proteins. Due to the presence of IPTG, the amount of proteins could be limited. We should see thinner bands in the samples, which are collected after adding IPTG. However, the extra bands are thicker than the parallel bands which are at the 0h. This phenomenon demonstrates that the thicker bands could be our target proteins. The masses of the bands match pretty well with the theoretical molecular weight of VP7-LTB.

Compared the left figure and the middle one, we could find that VP7-LTB induced by 1nm of IPTG expressed better than that induced by 2nm of IPTG. Because IPTG may make the bacteria less active, 1nm is a suitable concentration.

Compared the right figure with the other one, we could find that the adding LTB stimulates the expression of VP7.