Rotavirus (RV) is the main viral pathogen that causes severe acute diarrhea in infants and young children. Almost all children under five weeks of age have been infected with the virus, causing nearly 130,000 deaths worldwide each year. Social conditions in developing countries have led to reduced effectiveness of oral rehydration solutions and vaccines, as well as a lack of approved antiviral drugs, making rotavirus infection a global health problem. RV structural protein vp7, on the outermost layer of virus particles, is the first choice for the development of genetic engineering vaccines. We are trying to develop a new oral vaccine for hand, foot and mouth disease due to its advertisement for infants and young children.

The B subunit LTB in the heat-labile enterotoxin (LT) of Escherichia coli heat-labile enterotoxin (LT) has strong immunogenicity and adjuvant activity, and will not cause harm to the human body. LTB and a variety of non-related proteins and their non-protein antigens can increase the mucosal IgA and humoral immune IgG response levels of the antigen through different immunization pathways. Currently, there are three main types of vaccines, including inactivated vaccines/attenuated vaccines, mRNA vaccines/DNA vaccines, and neutralizing antibody/non-neutralizing antibody vaccines. Human vaccination methods include injection (hepatitis B vaccine, BCG vaccine, flu vaccine, etc.) and oral administration (poliomyelitis, cholera vaccine, and rotavirus vaccine).

Bacillus subtilis is an important probiotic in human intestinal tract and is safe and has no endotoxin. It is an ideal oral live vaccine expression vector. Recombinant foreign protein does not need to be purified and can be taken directly with the bacteria. We constructed a Bacillus subtilis expression system to express rotavirus VP7-LTB fusion protein. As a mucosal immune adjuvant, LTB enhances the antiviral ability of vp7. This oral vaccine has broad clinical application prospects.

Four recombinant plasmids were constructed. They are pET-28a(+)-vp7, pET-28a(+)-vp7-LTB (Figure 1), PHT43-HIS-VP7, and PHT43-HIS-VP7-LTB. The constructs of pET-28a expression vector and PHT43-HIS are used for recombinant protein production in E. coli and B. subtilis, respectively. The vp7 and LTB genes were obtained by gene synthesis according to the deposited sequence from GenBank (AY165008.1 and AF242418.1, respectively. The plasmids were constructed by homologous recombination. All the constructs are confirmed by DNA sequencing. 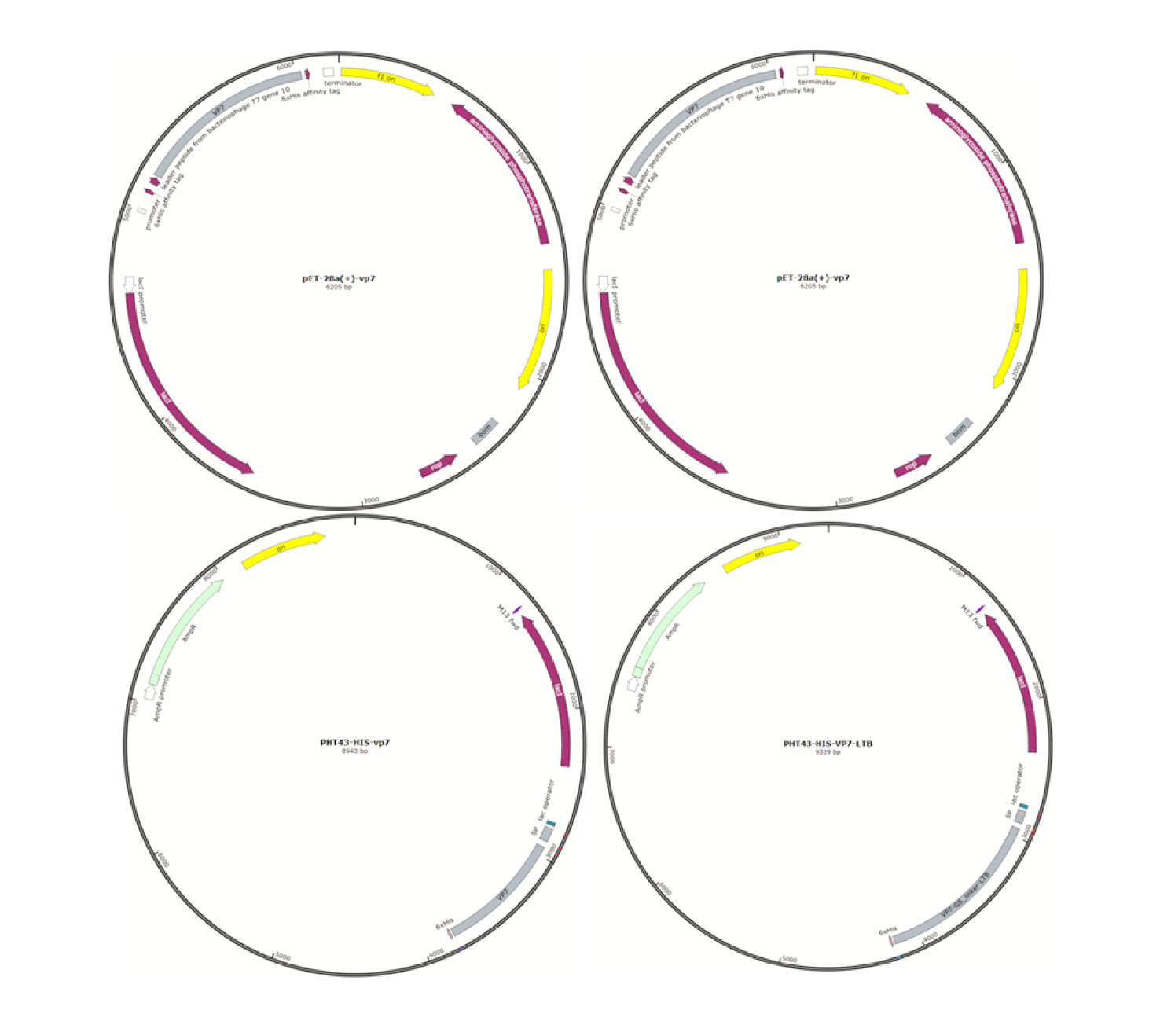 SDS-PAGE shows the protein expression in E. coli (Figure 2). VP7 and VP7-LTB protein appears in the precipitates which suggests that the proteins from inclusion body. IPTG may be a factor, 1nm is a suitable concentration. LTB stimulates the expression of VP7.

With induction by IPTG, B. subtilis WB800n did not find the target protein from SDS-PAGE (Figure 3). 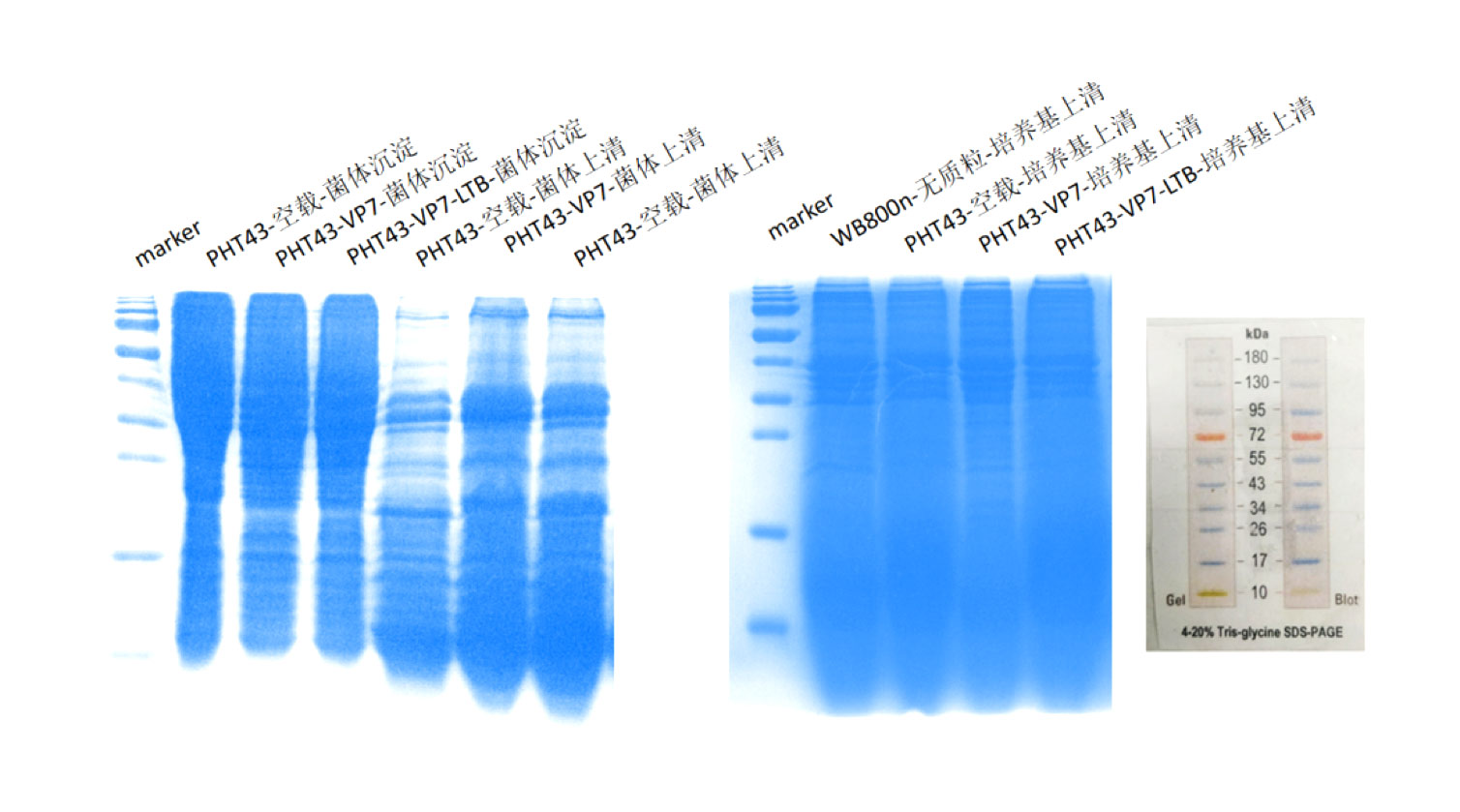 Figure 3. SDS-PAGE analysis of expression of VP7 and VP7-LTB in B. subtilis WB800n.

VP7 and VP7-LTB were successfully expression in E. coli predominantly as inclusion bodies. The protein expression in B. subtilis was not successful as indicated by SDS-PAGE and Western blot.